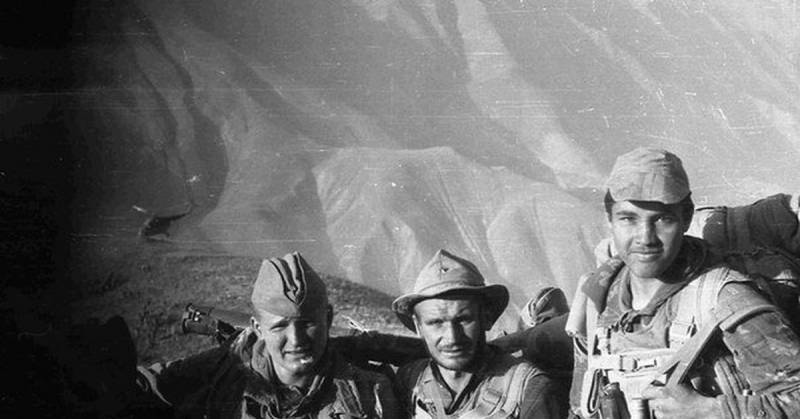 In his a book "Fiction is ruled out (notes from the head of illegal intelligence)" Yuri Ivanovich Drozdov wrote:

“I have been for many years. Life is behind us. Behind the shoulders of my country is a millennium. I am Russian. Since the time of the Scythians, we have been gullible, hospitable, but did not like to be put on our knees. We are very patient, but God forbid to bend it ... " 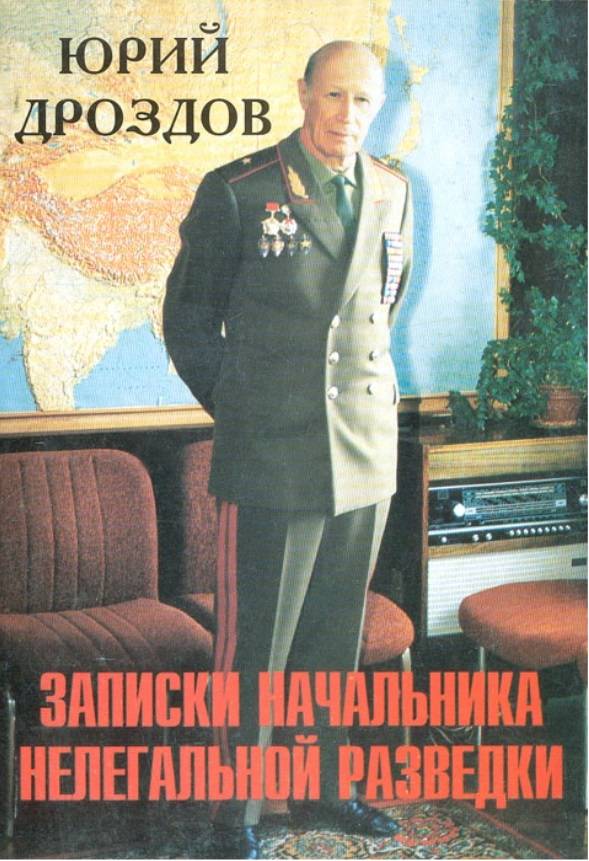 Once 35 and a half years ago in Lebanon they went overboard ...

Let's remember what happened then on September 30, 1985 in Beirut.

It was the usual last September day in Lebanon. Nothing foreshadowed trouble. Suddenly a couple of cars of the Soviet Union embassy were cut off by terrorists. At that time, doctor Nikolai Svirsky, secretary of the consular department Arkady Katkov, attaché of the embassy Oleg Spirin and employee of the trade mission Valery Myrikov were in the ambassadorial cars.

Unknown terrorists dragged these four Soviet diplomats out of their official cars, put the bandits in their cars and drove them to no one knows where. In the process of kidnapping these Soviet citizens, Arkady Katkov was wounded by terrorists - he tried to escape. Due to the fact that medical assistance was denied to him, it came to gangrene. And Katkov was eliminated by the terrorists (it is known that he was shot by the terrorist Imad Mugniya, nicknamed Hyena, with his own hands).

The USSR secret services urgently found out that the theft of diplomats was organized by the Palestinians. It was established that a certain group of the Forces of Khalid bin al-Walid, led by Imad Mugniya, nicknamed Hyena, claimed responsibility for the audacious kidnapping of four Soviet citizens. This terrorist was the personal guard of the chairman of the Palestine Liberation Organization, Yasser Arafat.

In addition, it was discovered that the attack on the staff of the Soviet diplomatic mission was ordered by the radical Shiite movement in Lebanon Hezbollah (an organization banned in the Russian Federation). 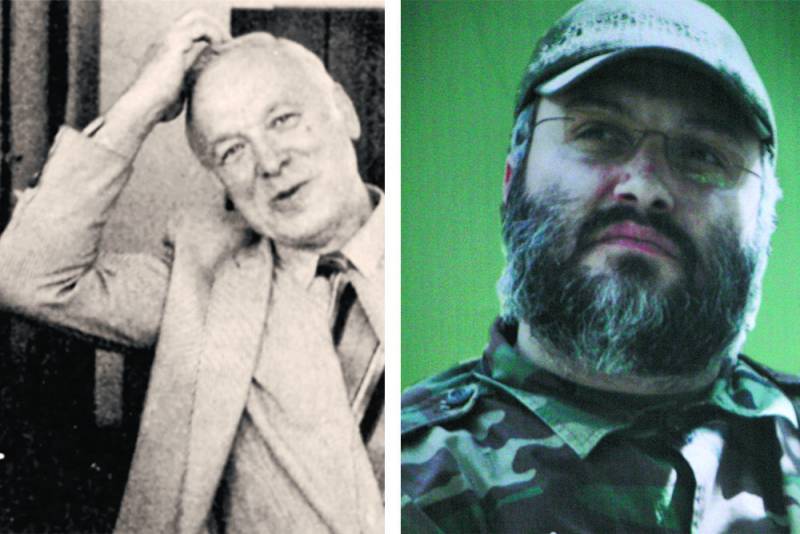 Left - Colonel Yu. N. Perfiliev, in 1985 - an employee of the First Main Directorate of the KGB of the USSR (foreign intelligence). On the right is the terrorist Hyena. Photo: Nikolay Dolgopolov / AP
It was also possible to determine that the terrorists hid the Soviet diplomats in Baalbek.

Soon, the leader of the bandits, Giena, presented a number of demands to the Soviet embassy. The essence of the ultimatum of the terrorists who then took our diplomats hostage was as follows. First of all, they demanded that the USSR force Syrian President Hafez Assad to stop operations in Northern Lebanon and give this territory to the Palestinians.

The terrorists' threats were not unfounded. By that time, they had already cordoned off the embassy residence. In addition, the Palestinian militants notified that they were going to start an assault on the encircled Soviet embassy and were ready to shoot both the kidnapped hostages and all other employees of the Soviet embassy.

The press today published that the Soviet ambassador then informed the USSR authorities about the situation. After that, telephone conversations with Yasser Arafat took place. First of all, he was asked how you can treat good friends like this:

“In addition, Mr. Arafat, you imagine that your threat about the storming of the embassy is simply unrealistic, because, as you know, about a hundred thousand regular Syrian army soldiers are stationed in Lebanon, who will come to our aid at any moment.

I ask you to take this factor into account and not to talk to me in such an impermissible tone.

And pass this on to your assistant Hyena (the ambassador specifically disclosed to Arafat that he knew the military name of Mugniya) so that he would forget the word “ultimatum” in relations with representatives of the Soviet Union. "
This conversation took place in harsh colors on purpose.

Then our ambassador, by order, demanded the release of the hostage diplomats, as well as the removal of the encirclement around the embassy building.

Later, from the interception of one of Arafat's conversations, it became known that after a conversation with the USSR ambassador, he ordered his entourage not to release the Soviet hostages and not to unblock the embassy building until the Syrian troops left northern Lebanon.

Here is what the adviser to the chief of intelligence told reporters:

“That is why Andrei Rogov was instructed to conduct a reconnaissance of the area for the presence of the hostages in Baalbek to ensure the possibility of a military operation to free them, and after the first unsuccessful attempt, Rogov turned to our chief, and he already decided to use us.
The adviser was outraged:

“How did Yasser Arafat decide to take such actions against us, after all, we nominated him to the leadership of the PLO, and provide a large volume of economic and military assistance? How many millions have we invested in it! His fighters only use ours weapon, which was mainly supplied to them free of charge. "
“Nobody understands this, not even our top management. But at the same time, we can’t lose control over the Palestinian movement ”.

For this reason, the leadership of the USSR made a very bold and extraordinary decision. The task of freeing the hostage diplomats was entrusted to the recently created at that time special foreign intelligence unit of the KGB of the USSR "Vympel". 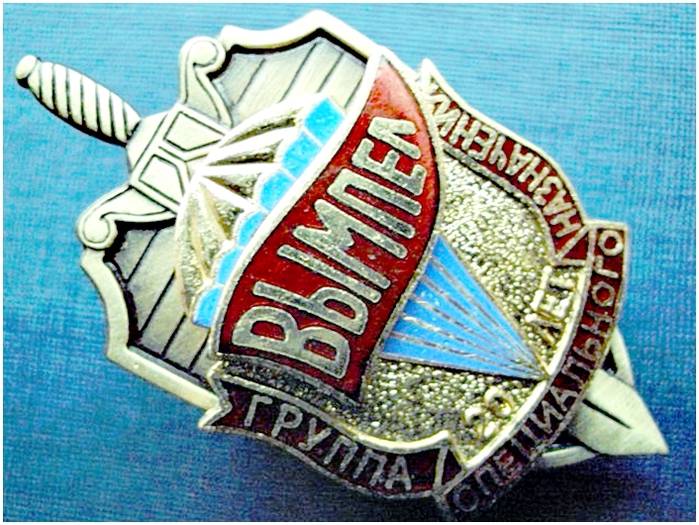 Control over the operation was entrusted to General Yu. I. Drozdov.

"Vympel" was not accidentally called the intellectual special forces, рассказал recently the president of the association of veterans of this unit Valery Popov told reporters.

"The art of such an intelligent special forces was not to use weapons, but to complete the task without anyone understanding what happened."
Ten commandos secretly arrived in Beirut. What is unusual for Soviet intelligence and the military concept - then, for the first time, it was decided to use harsh methods and intimidation.

The details of the communication have not yet been disclosed. There is a version that the intelligence officers had information from one of the secular leaders of the Druze community, Walid Jumblatt. Presumably, the whereabouts of the Soviet hostages became known from him. According to another possible version, this data was obtained from the national intelligence service of Israel.

All of a sudden, all of a sudden, in a strange way, the closest associates of Yasser Arafat and Hyena began to die. One by one, over a dozen such terrorists were eliminated.

And then an unknown child delivered a handwritten ultimatum to Hyena. This also clearly demonstrated to the leader of the bandits that his whereabouts are well known personally. The message sent to the terrorists said that if the bandits did not release the captured Soviet diplomats, then the leader of the Hyena gang could choose his next victim among his entourage. And then, it seems, Hyena realized that this next victim would surely be him now. After all, they went to him.

Be that as it may, but one day three Soviet bearded men approached the gates of the USSR embassy in Beirut. They were not even immediately recognized. These were the released diplomats. By that time, the bandits had also removed the embassy's entourage.

And our special forces disappeared from Beirut just as unclear as it appeared there.

Rumor has it that Yasser Arafat was then out of rage, as they say, ready to tear and throw. But he was already powerless to change anything. It became clear: the USSR is a toothy friend. Although this did not interfere with the friendship, rather, on the contrary, it became even stronger. Indeed, in the East, strength is respected.

This operation was undoubtedly a political victory for the Soviet Union.

Actually, the mission of the group was to free the hostages. Intelligence first established that they were being held in a Baalbek prison. Then it became known that they may have been transported to the Shatila camp. Initially, a forceful scheme for the release of our diplomats was considered. Therefore, it was necessary to know everything about the prison (camp) where they were kept.

For this, our intelligence officers had to penetrate, in fact, into the very den of terrorists. And to provide a detailed survey of the area and those buildings where hostages were held. The most modern digital reconnaissance equipment was used at that time. And the picture was transmitted to the USSR via satellites.

It was for this that Vympel visited Baalbek in those days. And I must say that the role of the special group can hardly be underestimated. The mission was accomplished.

By the way, the footage taken was very useful for demonstrating, among other things, the "soft power" of the Soviet Union. A couple of weeks after the release of our diplomats in Beirut, the USSR Central Television showed the film “20 minutes in Lebanon” in the “Film Travelers Club” program.

And what about our scouts?

Rumor has it that it was not without pleasure that they uncorked a bottle of whiskey together with their legendary General Yuri Drozdov.

Alas, in the dashing 90s, Yuri Ivanovich Drozdov will be fired from service. And the Vympel group will be disbanded. True, already in 2000, such a decision will be called incorrect and erroneous. And group "B" will appear in the country again.

Yuri Ivanovich Drozdov was once asked a question:

"Do you think the country needs to have a unit again that will carry out special missions abroad?"
He answered to it like this:

“Today it is impossible to use weapons that are destroying all of humanity. Judging by the documents of our "partners", to make war safe only with the help of aces-saboteurs, which can disable the object without engaging with it, destroy the enemy, making him unable to strike. Now that "Vympel"which was originally created, more needed than ever, I am firmly convinced of that. " 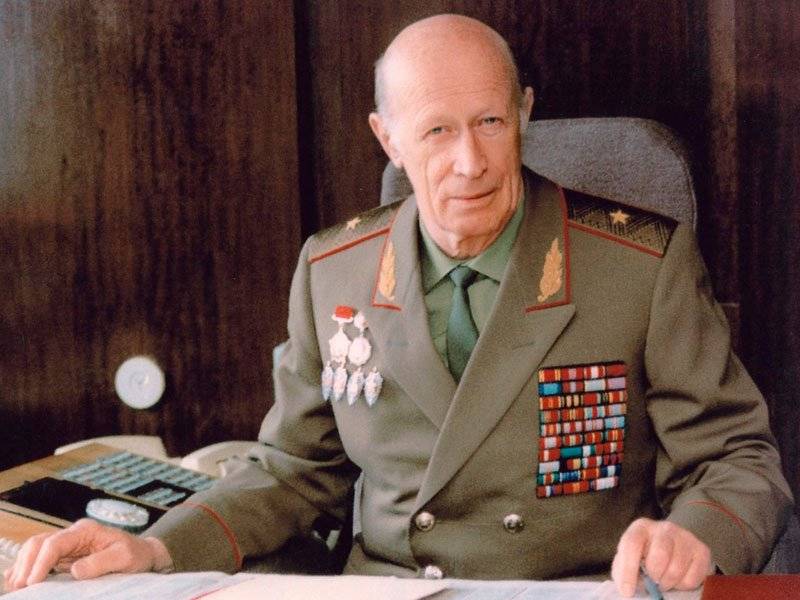 Yuri Ivanovich Drozdov
And once more, speaking to young scouts, Drozdov reminded them of the words of the famous General Alexei Alekseevich Brusilov:

"Governments change, but Russia remains, and everyone must serve her conscientiously in the specialty they once chose."

The then four hostage-diplomats had different fates.

Recall that the wounded Arkady Katkov was shot by terrorists (namely, Hyena).

And the other three diplomats were sent home to the USSR after their release. Later, the doctor Svirsky and Myrikov again began to travel abroad.

But with the employee of the diplomatic mission Oleg Spirin there was a bad luck. After returning to the USSR and another five years at the Center, Major Spirin was sent to Kuwait. And there he ... suddenly disappeared. There is a version that this traitor fled to the West.

It is also known from the media that the car of the terrorist Hyena (who shot the Soviet diplomat Arkady Katkov) was blown up in the suburbs of Damascus at 11:12 on February 2008, XNUMX.

Ctrl Enter
Noticed oshЫbku Highlight text and press. Ctrl + Enter
We are
Chernobyl notebook. Part of 3Diplomats of the People's Commissariat of Defense: on the eve and during the war
Military Reviewin Yandex News
Military Reviewin Google News
126 comments
Information
Dear reader, to leave comments on the publication, you must sign in.