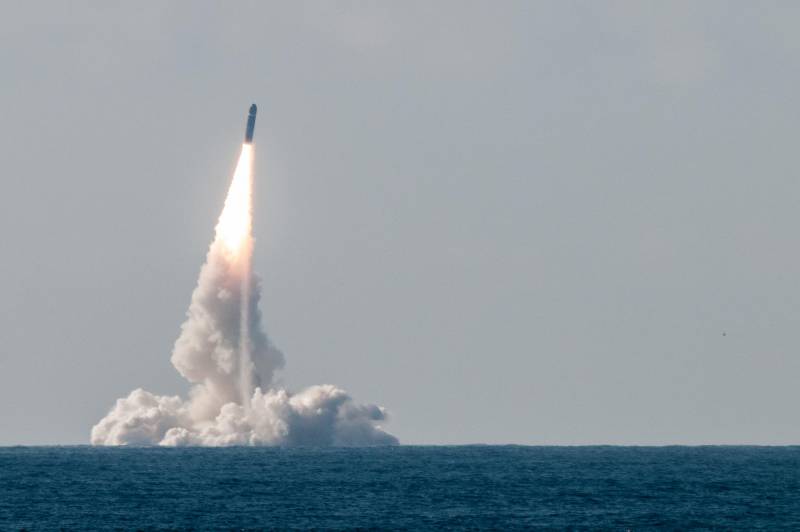 SSBN Triomphant carries out the launch of the M51 rocket, 2016

The French naval forces in terms of their size and potential are the first in Western Europe and the second in NATO, second only to the fleet USA. They include developed surface and submarine forces, including strategic, as well as naval aviation... Plans are being drawn up and implemented for the further development of the fleet, which, as expected, will allow maintaining and increasing combat effectiveness.

Currently, the French Navy is serving approx. 35,1 thousand people The number of naval aviation personnel is 6,5 thousand people. Another 2,2 thousand serve in the Special Operations Forces and the Marine Corps (FORFUSCO). The fleet has about a dozen naval, air and land bases. They are located both on the coast and inland.

The French submarine force includes nine submarines, incl. strategic missile carriers. The surface fleet has more than 80 warships and boats, as well as 35 auxiliary units. The naval aviation operates over 110 aircraft of all classes. There is a wide range of ship and aircraft weapons for various purposes. 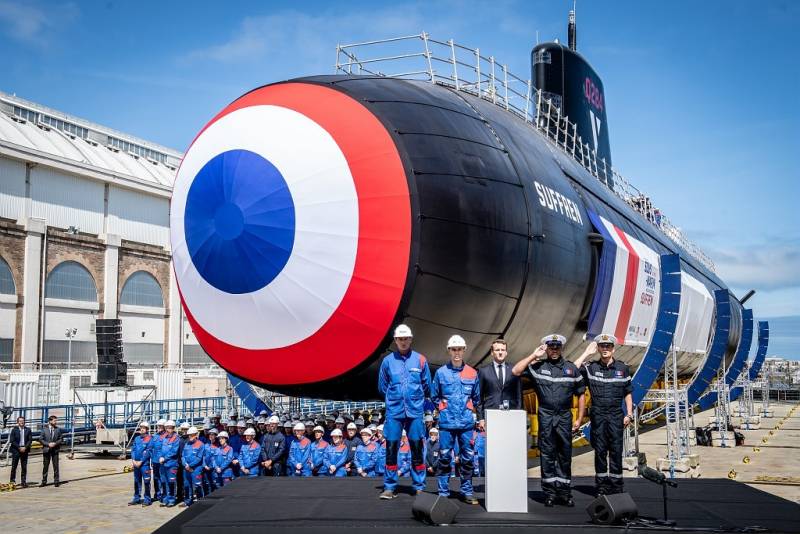 Submarine Suffren before launching, July 2019.
In its current form, the French Navy is capable of carrying out strategic deterrence (at the moment they are the only component of strategic nuclear forces), defending sea borders and displaying a flag in remote areas of the World Ocean. In terms of quantitative and qualitative indicators, the French fleet cannot claim world leadership, but it compares favorably with other European navies.

The fleet is currently being developed according to two programs. The first is the Plan for the Construction of the Armed Forces, calculated until 2025. In 2018, the Mercator plan was adopted, which provides for measures to improve the fleet until 2030. Both programs provide for the construction and purchase of new materiel, infrastructure development, increased training of personnel, etc. etc.

France's strategic nuclear forces are represented by four Triomphant-type SSBNs, each carrying 16 locally developed M45 or M51 missiles. They were recruited from 1997 to 2010 and are believed to be capable of continuing service for the foreseeable future. The possibility of their replacement is still considered at a theoretical level no real action has yet been taken. 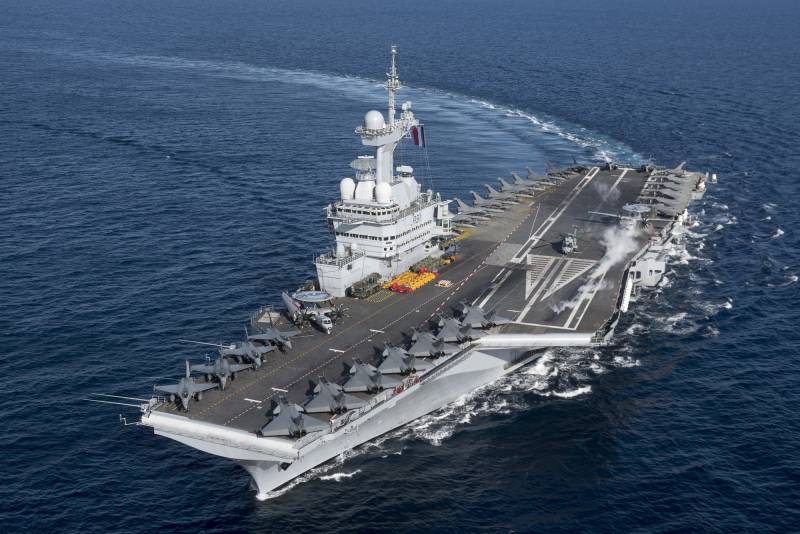 Aircraft carrier Charles de Gaulle
There are four Rubis-class multipurpose nuclear submarines in service, out of six built and commissioned in 1983-93. Such submarines carry torpedoes and Exoset missiles to combat enemy ships and submarines. The fate of these ships has already been determined. While they will remain in operation, but over time, as the resource depletes, they will be written off.

To replace the nuclear submarine Rubis, a new project Barracuda was created. It is planned to build six ships on it. The lead boat Suffren was accepted into the Navy in November last year. In the near future it will reach full operational readiness. The fleet will receive five more ships in 2022-30.

The French Navy has one aircraft carrier Charles de Gaulle and three Mistral-class amphibious assault ships. These ships are planned to be kept in service until at least 2030 - due to timely repairs. In the future, the aircraft carrier and the UDC will have to undergo modernization according to projects, the development of which has already begun.

The surface forces have 1 Cassard-class destroyer and 2 Horizon-class destroyers. The first of them will be written off in the future and replaced with a ship of a new construction of a different class. The other two destroyers are planned to be modernized with expanded capabilities and extended service lives. 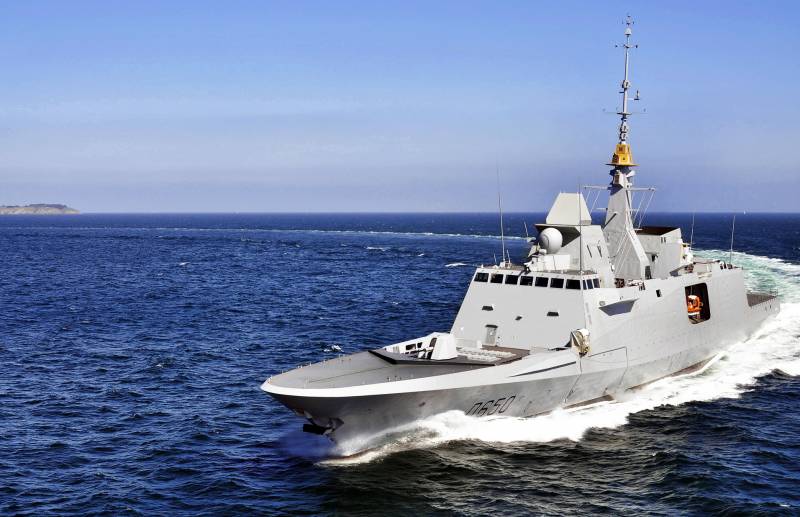 Frigate Aquitaine of the project of the same name
The last anti-submarine defense frigate Latouche-Tréville of the Georges Leygues class remains in service. In the coming years, it will be taken out of service and disposed of. Six Aquitaine-class air defense frigates have already been built under the FREMM project. Two more such ships, modified for the implementation of ASW, will be handed over in 2021-22. In the future, new orders may appear. With the help of frigates "Aquitaine" in various configurations, the Navy plans to replace most of the obsolete frigates and destroyers by 2030.

For the time being, five La Fayette-class frigates will continue to serve. In the future, they will be replaced by new FDI ships. Currently, at one of the French shipyards, a groundwork is being created for the construction of a lead frigate of this type. The bookmark is expected this year. Also for the time being, six Floréal "reconnaissance frigates" will be retained.

Mine defense is provided by 15 minesweepers of three different designs with different characteristics. The most massive are the ships of the Éridan type - 10 units. In 2023, it is planned to receive the lead ship of the new type SLAM-F. In the future, such minesweepers will replace all available equipment. 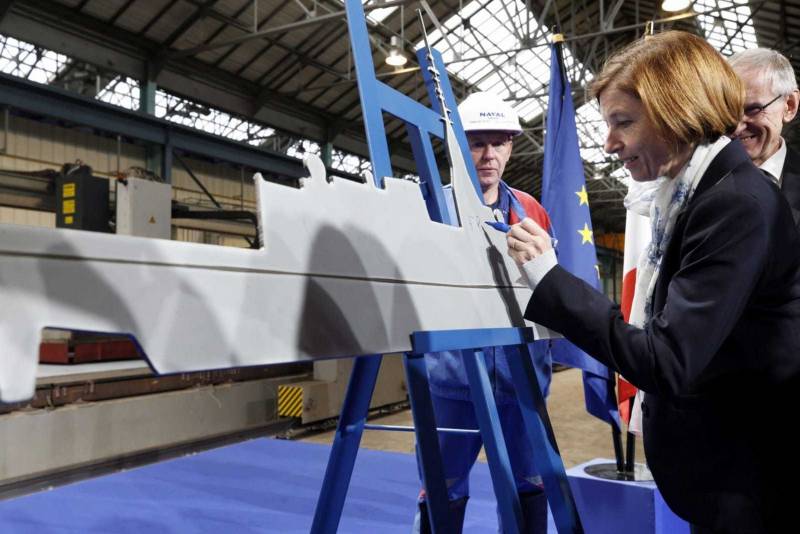 FDI lead frigate laying ceremony, October 2019
15 patrol ships and boats, as well as 6 Coast Guard pennants will continue to serve for now. However, during the twenties, most of them will be replaced, for which a number of new projects with different characteristics are being created.

Similar plans have been drawn up for the operation and renewal of the auxiliary fleet. As the resource depletes, new projects appear, etc. in the medium and long term, all existing transports, tugs, reconnaissance vessels, etc. will be replaced.

The naval aviation of the French Navy is armed with more than 40 Rafale-M carrier-based fighters used on the Charles de Gaulle aircraft carrier. With them, 3 E-2C AWACS aircraft are included in carrier-based aviation. More than 20 Atlantique II patrol / anti-submarine aircraft and over 10 Falcon patrol aircraft of various modifications are also operated. 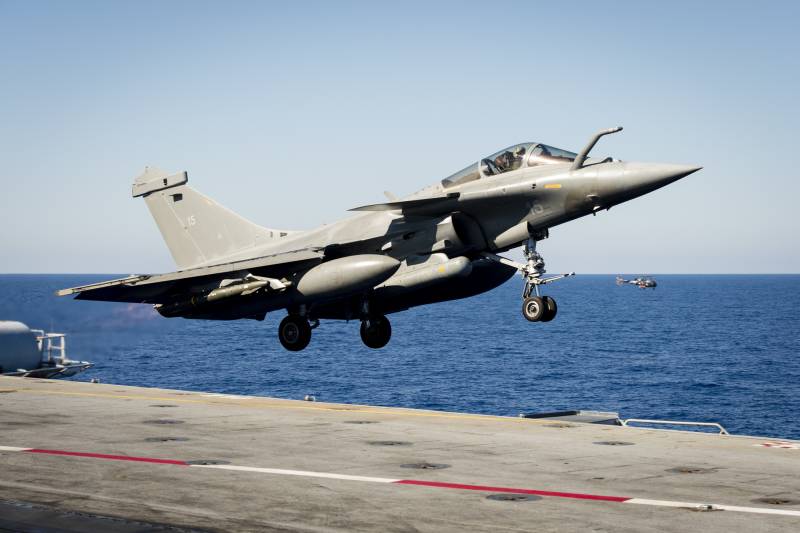 Fighter Dassault Rafale-M over the deck of "Charles de Gaulle"
There are auxiliary aircraft. The helicopter group is mainly represented by transport and / or search and rescue vehicles of various types. Combat (anti-submarine) capabilities have only NH90 in the amount of 25-26 units.

No radical restructuring of the structure or composition of naval aviation is expected in the next decade. It is proposed to carry out a deep modernization of deck and patrol aircraft, as well as AWACS aircraft in order to improve their basic characteristics and capabilities. In the future, it is possible to replace multi-purpose and transport vehicles of different types. The development of new models of aviation weapons is underway to combat air, surface and ground targets.

At the moment, the French Navy is the first in size and power in Europe and the second in NATO. It is planned to maintain this state in the future. The adopted development programs for the next decade do not provide for a significant change in quantitative indicators up or down. However, it is proposed to improve the structure and increase quality indicators. 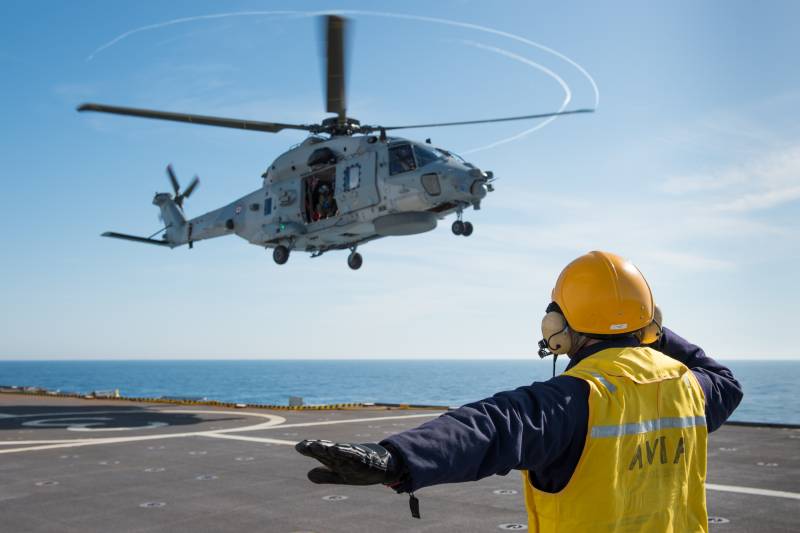 Multipurpose helicopter NH90
Several main directions are envisaged. The first provides for the continuation of construction and renovation of infrastructure. The second stipulates the renewal of the combat strength by gradually replacing outdated ships, submarines and aircraft with modern and promising models that have obvious advantages. The third area is modernization. Until a combat unit has developed a resource, it will be updated with a significant increase in characteristics and capabilities.

Thus, France has clear and clear plans for the development of its naval forces, and also has the capacity to carry them out on time. Thanks to this, the French Navy in the future will be able to maintain a high combat capability and make the necessary contribution to ensuring national security.

Ctrl Enter
Noticed oshЫbku Highlight text and press. Ctrl + Enter
We are
Nuclear Potential of France (part of 2)Contours of updating the strategic potential of the West
Military Reviewin Yandex News
Military Reviewin Google News
46 comments
Information
Dear reader, to leave comments on the publication, you must sign in.