Robot games: how the Pentagon defeated the Russian army in 2030 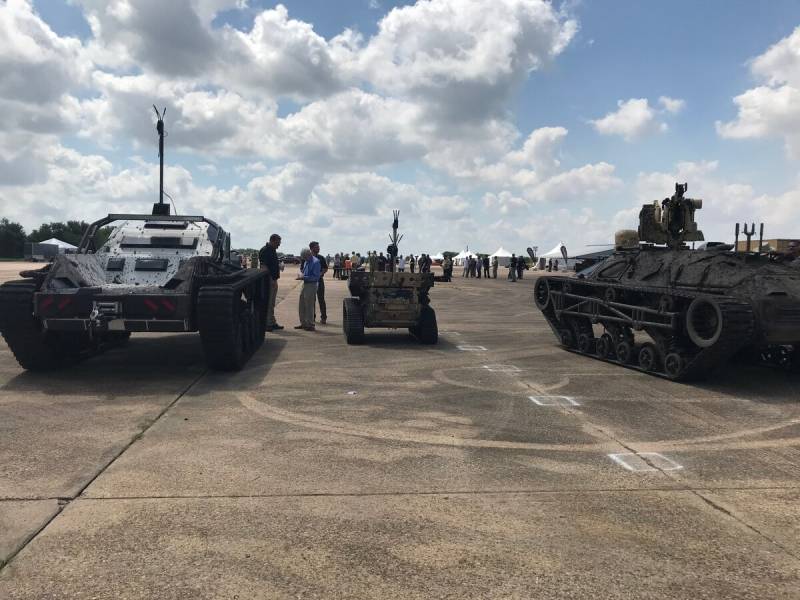 A hypothetical war between the Russian and American companies, according to the calculations of the analytical company RAND, took place in the early 2030s near the Latvian town of Gulbene. The Russian army was represented by a unit of "red", consisting of three motorized rifle platoons on the BMP-2M and one tank platoon on the T-90M. The unit was covered from the air by one Tunguska, and an artillery observer based on the BMP-2 with the Eleron drone was responsible for reconnaissance. For what reason American analysts have chosen just such an arsenal, which is not the most modern even for the present time, is unknown. It is likely that there was no suitable software, or they simply decided to pre-program the result of the battle. 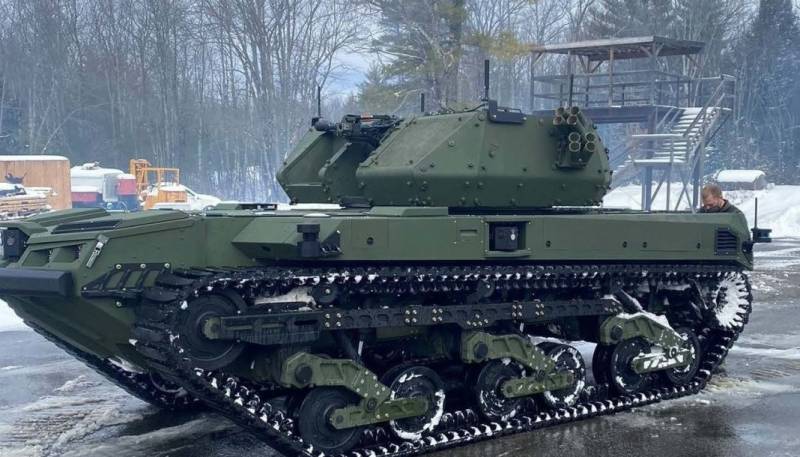 Medium-class combat drone RCV-M. Potential participant in the conflict with Russia in 2030. Source: usmilitarynetwork.com
It is worth mentioning separately that each combat vehicle was virtually controlled by a separate gamer operator. Only the actions of fully autonomous machines were partly due.

The American side or "blue" was represented by much more advanced armored vehicles. Of the "classics", only the Abrams M1A2C remained, equipped with all active and passive protection complexes possible for its time. By the early 30s, according to RAND, the Pentagon will be armed with an optionally controlled BMP Optionally Manned Fighting Vehicle (OMFV). Of armament - a 50-mm cannon and anti-tank missiles. The OMFV booking level is rated at an average level. The BMP in the shock company was represented in two guises - six vehicles were with a crew and infantry, and two were part of a platoon of robots. The robotic platoon also had six Robotic Combat Vehicles — Medium-Weight (RCV-M). The armor of these vehicles can withstand the fire of a large-caliber machine gun, a 30-mm cannon and two ATGMs from the armament. But with robots the "blue" is not all. The light vehicles were six wheeled / tracked Robotic Combat Vehicle — Light-Weight (RCV-L) vehicles, each with a heavy machine gun and an anti-tank Javelin. Air reconnaissance was carried out by small-sized Coyote drones with thermal imagers and infrared cameras. Such a mixed mechanized-robotic company was supposed to attack the Russian unit, drive it out and move east. 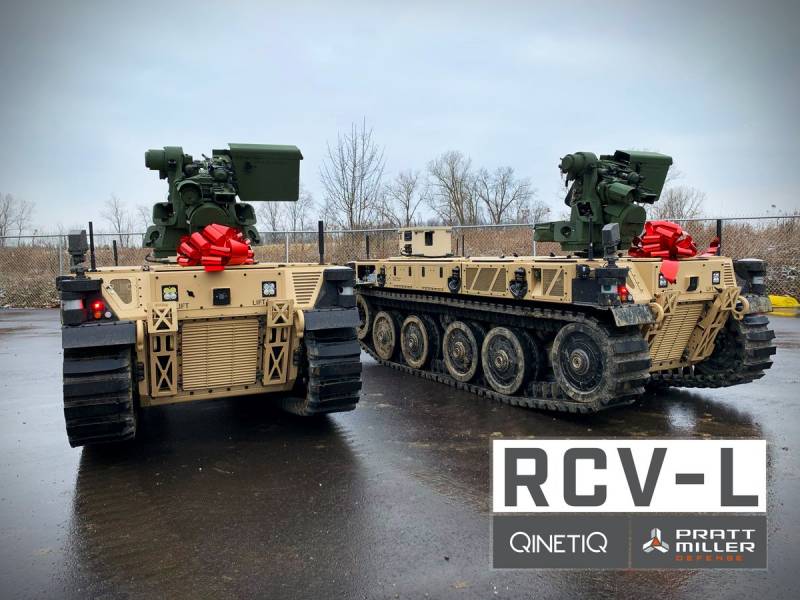 Lightweight robots RCV-L. Source: twitter.com
The game had two scenarios (gameplay). In the first stories against the "red" were exclusively remote-controlled vehicles in conjunction with traditional technology. In the second case, technology with the rudiments of artificial intelligence and machine learning entered the battle. Such ground drones can independently determine the route and capture targets. Autonomous robots, in accordance with the scenario, had to obey the commands of the company commander and even open fire on their own, if they saw fit. The Pentagon has no plans to adopt such fully autonomous vehicles yet, but in the foreseeable future they may become operational. Interestingly, RAND analysts do not foresee the appearance of heavy-class autonomous vehicles in the American army by the beginning of the 30s. That is why the good old Abrams played the role of the main striking force in the game. There are several reasons for this disbelief in the technological progress of the United States defense complex. Firstly, robots on the battlefield are viewed as a bargaining chip, which is not particularly a pity. And the loss on the battlefield of a heavily armored robot worth several million will be noticeable for the military budget and the taxpayer's pocket. Secondly, the error of a robot with a large cannon is much more sensitive than a random burst of 30mm or 50mm guns from medium and light ground drones.

What happened in the end?

In fact, RAND started the game to compare the capabilities of remotely controlled drones and fully autonomous vehicles. With the Russian troops, despite the obvious backwardness for the 30s, everything was not so simple. The players equipped the infantrymen with knapsack jammers for radio control signals, which seriously complicated the work of unmanned remotely controlled vehicles. In this regard, autonomous robots were more stable, although they also had to receive separate commands from the company commander through the radio channels of vulnerable communication. In general, the conclusion of the American side was simple - something had to be done with Russian electronic warfare systems. They cannot disrupt the offensive of the company, but they can seriously complicate the control of the drones.

In any war, robots must be at the forefront of the offensive to conduct reconnaissance, save lives, and strike at the most defended areas of the front. In the game RAND made no exceptions, and the RCV light wheeled robots with medium crawler tracks were the first to attack. In fully autonomous mode, they turned out to be great baits! Defending Russians Tanks and infantry fighting vehicles opened fire on advancing drones, thereby unmasking themselves. And on the discovered firing points of the "red" American tanks and the attracted artillery were beating unanimously. From here, RAND concluded that fully autonomous drones were used primarily for opening the firing points of the defending enemy. Light cars are especially good in this role - they are like weapon offensives are not very good (machine guns are almost useless in classic combat), and it's not a pity. Analysts especially emphasize that such equipment cannot be sent to the vanguard of an offensive without aerial reconnaissance and artillery support. Drones, due to the weakness of surveillance equipment, will not really detect anyone and will quietly and peacefully die.

As a result, researchers at RAND and Forbes, inspired by the results of a military computer game, recommended that the Pentagon, on the readiness of autonomous robotic systems, integrate them into the battle formations of the army. Russian electronic warfare systems in the near future are quite capable of rendering useless all remotely controlled combat vehicles. The advice of the respected RAND team in the United States is usually heeded in the defense department. Analysts even named the date for the coming of a happy autonomous robotic future - the beginning of 2031. But not everyone agrees with this. 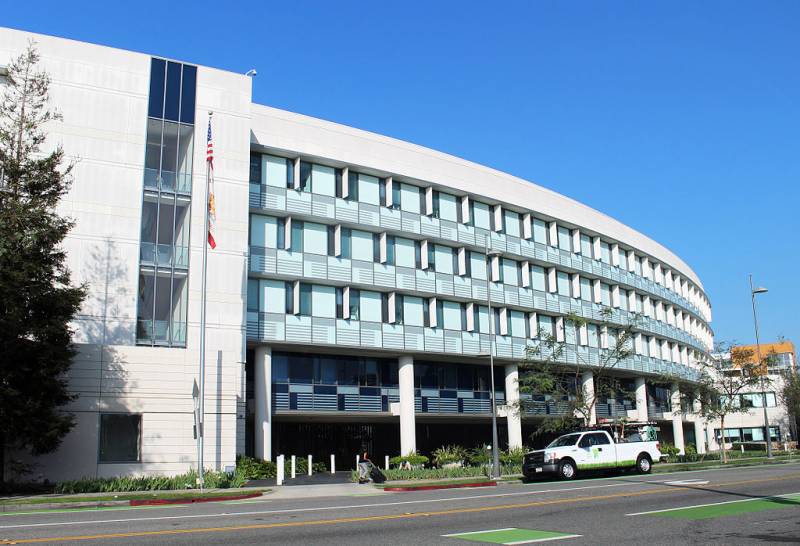 RAND headquarters in Santa Monica. Source: ru.wikipedia.org
Resource thedeaddistrict.blogspot.com, following the analysis of the RAND games, released a large analytical material in which it predicted the long-term involvement of land drones in the fighting of the American army. The authors rightly point out the lack of serious combat experience in ground robots, even on remote control, not to mention fully autonomous systems. So far, the rudiments of artificial intelligence and machine learning can be found in flying reconnaissance and strike drones, but the specifics of their work are seriously different from ground vehicles. First of all, such wheeled or tracked "smart guys" should inspire confidence on the part of soldiers and officers. It is one thing when a robot is under human control, and quite another when it is “on its own”, and even with a gun. RAND's opponents cite a typical example of human perception of the first elevators in history. The inhabitants flatly refused to move between floors without an elevator on board. It took several decades of practice for us to feel confidently one-on-one with the elevators. With self-guided combat systems on land, the story will be similar.

Actually, there is still no clear understanding of what real autonomy is. Can we consider an autonomous machine that completely replaces human capabilities, or should a robot necessarily surpass human capabilities? Critics of the RAND concept generally suggest not to suffer with the rapid introduction of autonomous intelligence in ground combat drones until they are capable of full-fledged raids deep into enemy territory. Artificial intelligence must fight in close connection with winged drones, as well as constantly interacting with human-controlled combat drones. There is no need to wait for such technologies by 2031, so all attempts to partially turn on the autonomous strike "infantry" will only be a waste of time and money.

Ctrl Enter
Noticed oshЫbku Highlight text and press. Ctrl + Enter
We are
What you didn't want to know about EnglandList of destroyed the largest and most high-tech enterprises
Military Reviewin Yandex News
Military Reviewin Google News
28 comments
Information
Dear reader, to leave comments on the publication, you must sign in.