The Royal Armory in Stockholm and its knightly armor ... 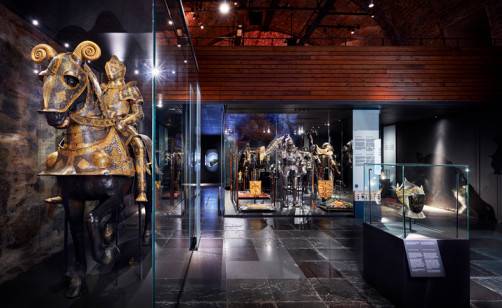 In the basements where the Royal armory ward in Stockholm, when we go down there we will see this ...

"He will command some to plow his land and harvest his crops, and others to make military weapons and equipment for his chariots."
(First Samuel 8: 12)
Museum collections of knightly armor and weapons. The two previous materials devoted to the armor of the Swedish king Eric XIV aroused genuine interest of the VO readership, and it is clear why - if many have heard about the armor of the same Henry VIII, then there is much less information about Sweden, in fact, there is practically no information at all. Of course, there is a site for this or that museum, including the Armory of the Swedish kings in Stockholm. But ... these sites are not always convenient to use. This is not the Metropolitan Museum of Art in New York, the site of which is clearly designed for the very latest "teapot"! Nevertheless, there are also museum employees who are usually always ready to help you, you just need to contact them and explain in an understandable way what you need and why you need it. 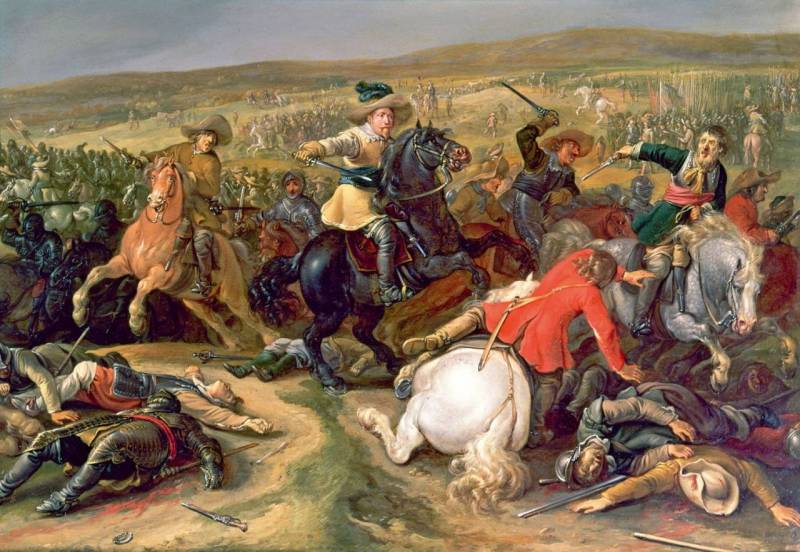 The creator of the Armory was a very belligerent monarch and personally led his squadrons to the attack! "Gustav Adolphus at the Battle of Lutzen." Jan Martens de Jonge (1609-1647), c. 1634 (private collection)
Well, today we will tell you about how this armory of hers appeared in Stockholm, and about some of the armor of her exposition, armor that, it happens, can be seen in the photo on the Internet, but ... without any information, dedicated to them. 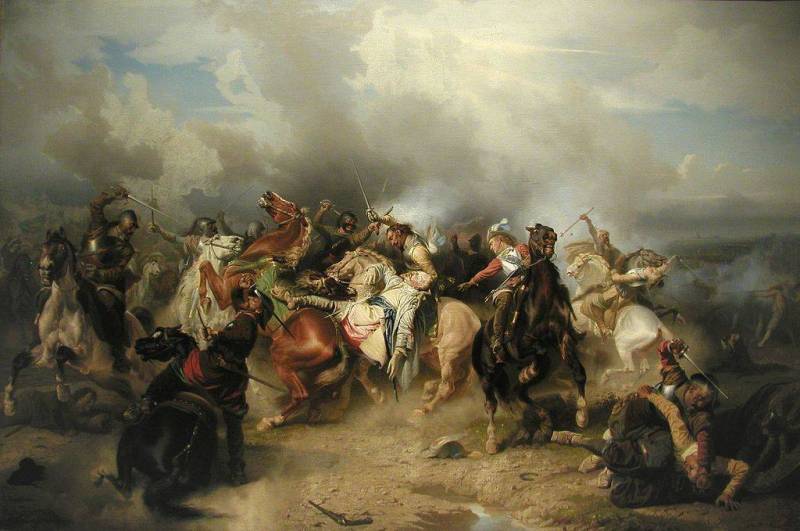 As a result, he was first wounded and then killed in the battle of Lützen. “Death of King Gustav II Adolf. At the battle of Lützen on November 6, 1632 ”. Artist Karl Walbom (1810-1858). Written in 1855 by the National Museum, Stockholm
And it so happened that in 1628 the King of Sweden Gustav II Adolf decided that the clothes (two suits, in one of which he was wounded!), Which he wore during his campaigns in Poland, should be kept for posterity "for eternal memory" and in addition, also put on public display. This is how he laid the foundation for Livrustkammaren, Sweden's oldest museum. Before that, the Armory was the most ordinary arsenal located in the ancient castle of Tre Krunur. Now people have the opportunity to see the artifacts stored in it "live" and remember the life and deeds of their owners. In 1800, this remarkable collection merged with the Royal Dressing Room, and everything that was there was also moved to the Armory. Moreover, although they are stored there, they are also in use at the same time, but are mainly used only in the most solemn occasions, such as weddings of royals, coronations and funerals. 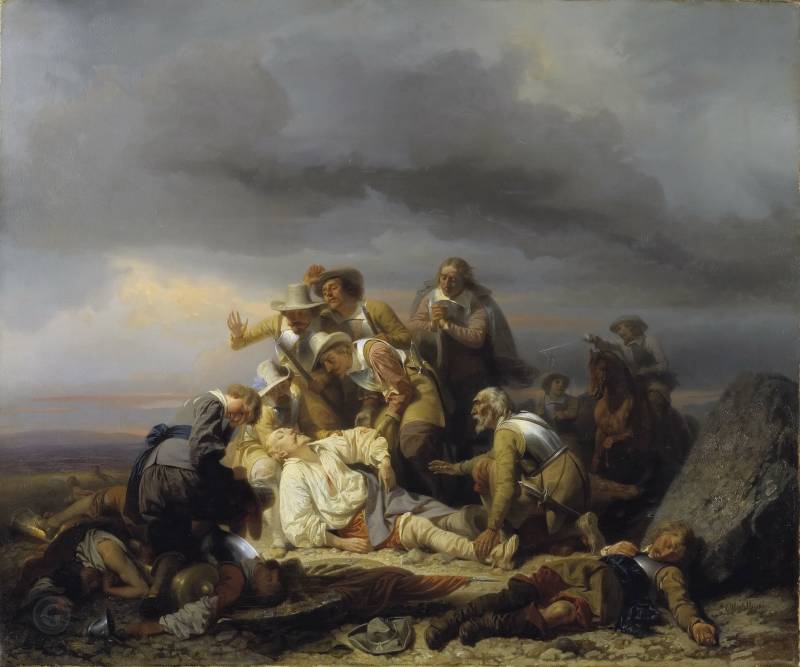 Karl Walbom: "Finding the body of King Gustav II Adolf of Sweden after the Battle of Lützen." National Museum, Stockholm
When Gustav II Adolf fell at the Battle of Lützen in 1632, his bloody clothing and the skin of his horse Streif were also sent to Stockholm. The clothes were kept in the castle, and the skin of the horse was stretched over a wooden sculpture. In addition to the bloody shirts of Gustav II Adolf from the battle of Lützen, there are also boots and a cloak of Charles XII, soiled in mud at Fredrikshald, where, during the siege, he received his fatal bullet in 1718. The costume of Gustav III, in which he was at the masquerade in 1792 and where he was fatally shot in the back, is also, of course, here. Where else could such a valuable exhibit be? One of the oldest artifacts in the museum is the helmet of Gustav Vasa from 1542. The helmet was apparently made in southern Germany around 1540. And such a helmet with a crown is a great rarity, they practically have not survived. The helmet was bought in Augsburg by order of the king by the merchant Klaus Hader. It was probably worn during the funeral procession of Gustav Vasa in 1560, since a helmet with a golden crown is mentioned by one of the witnesses of the ceremony. The gilded crown has a medieval look and is a fitting symbol for the hereditary monarchy he created. 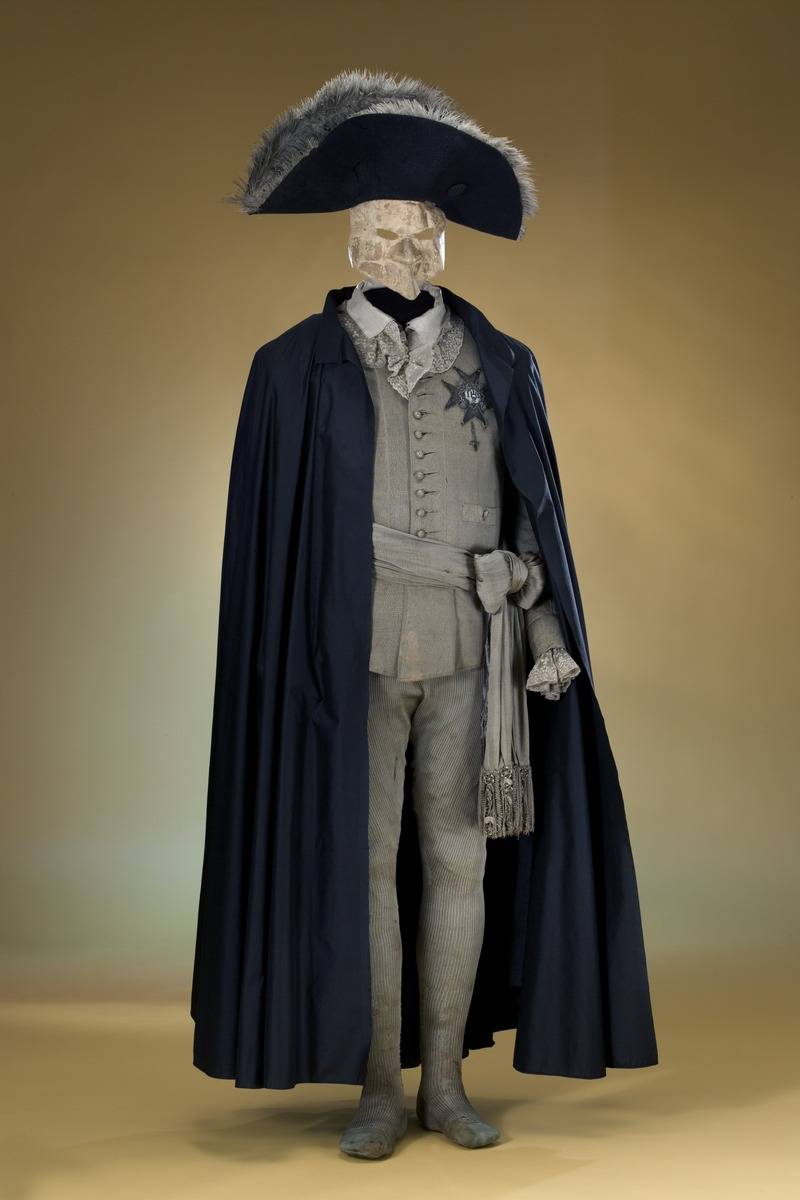 And here is the ill-fated fancy dress of Gustav III, in which he was shot in the back!
A very curious artifact is ... a Russian helmet with gold decor, made in Moscow around 1533 for the future Tsar Ivan IV, nicknamed "Terrible". It was probably first captured by the Poles in Moscow, and then the Swedes captured it in Warsaw in 1655. Around the crown of the helmet there is a text in Old Russian, which clearly indicates that the helmet belongs to Ivan IV (1530-1584).

In the 1660s, part of the chamber's exhibits were moved from the castle to the Queen Christina Pavilion in Kungstradgarden. Shown here were the Costumes of Gustav II Adolf, the Streif horse, beautiful saddles and fabrics. At that time, the exhibition was considered one of the main attractions of Stockholm. Armor, weapons and banners were kept in the castle. 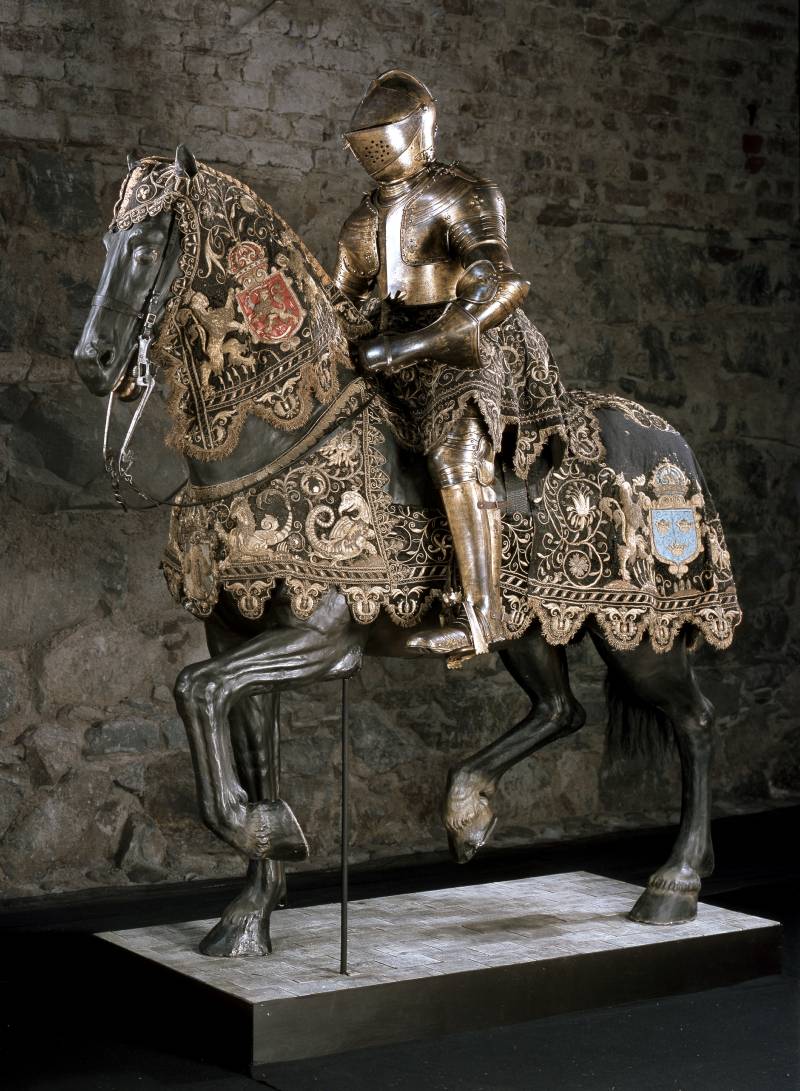 By the way, absolutely knightly, but ceremonial armor of King Gustav II Adolf is also exhibited here. In them, of course, he no longer fought. But to have - had. So it was supposed to be according to the position! Royal Armory - Livrustkammarin, a museum at the Royal Palace of Stockholm
In 1691, it was decided to establish a weapons museum at Makalos Palace in Kungstradgarden, so weapons and armor were moved there. Thanks to this, the collections survived when the Three Crowns Castle burned down in 1697. The Armory has been in Makalos Palace for 100 years. Later it was rebuilt into a theater, and Livrustkammaren moved to the Fredrikshovsgatan castle on Ostermalm. 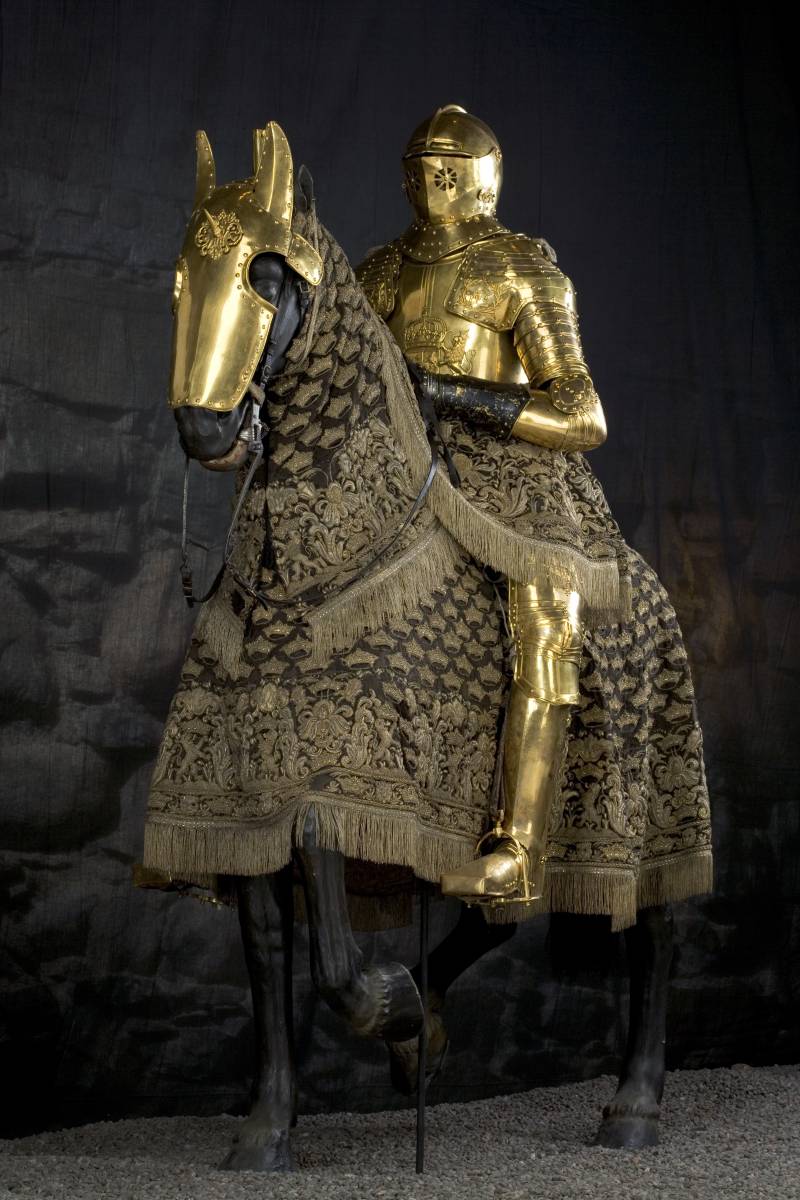 Armor worn by Johann Gillenstern, who participated in the funeral procession of Charles X Gustav. Royal Armory - Livrustkammarin, a museum at the Royal Palace of Stockholm
In the XNUMXth century, the Armory managed to visit various buildings in Stockholm. The objects were also divided. The most valuable items were sent to the Royal Castle, flags and armor were placed in the Church of Riddarholm, and most of them were transferred to the old castle theater Confidensen in Ulriksdal Castle. 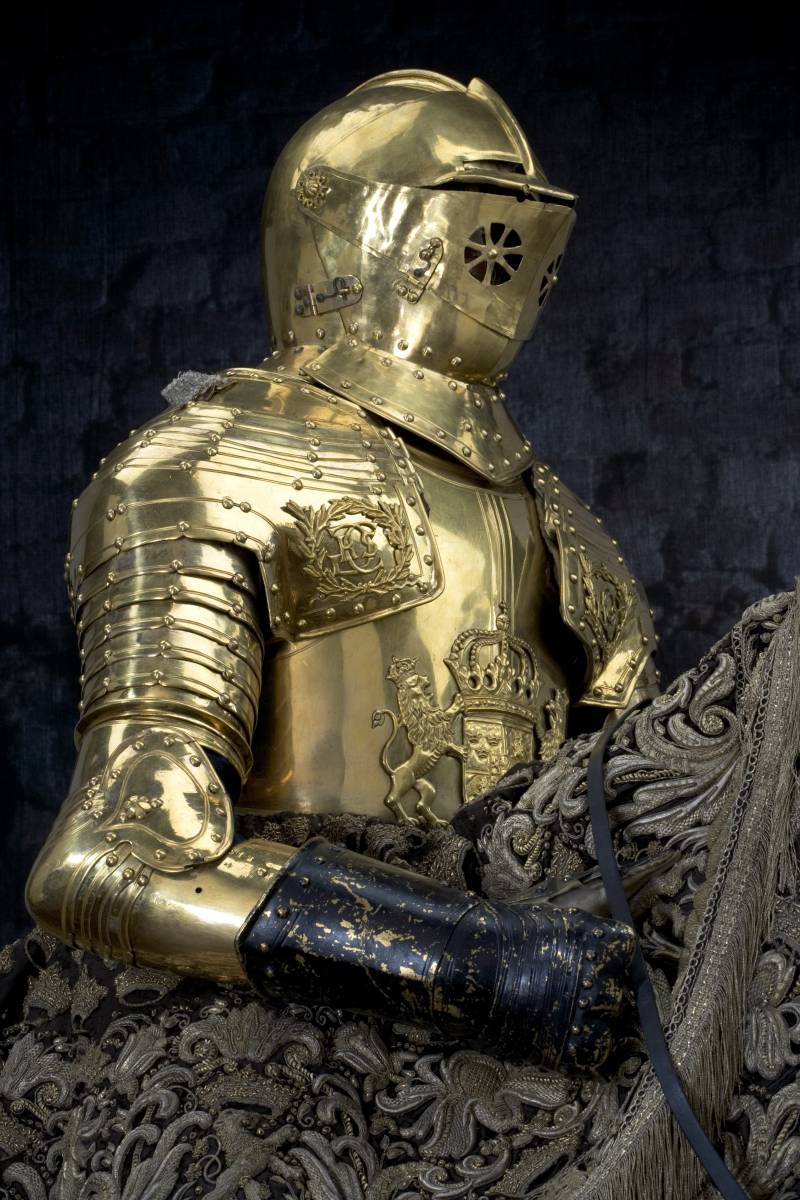 Close-up view of this armor on the right. Royal Armory - Livrustkammarin, a museum at the Royal Palace of Stockholm
In 1850, all artifacts were again collected at the Armory. The new place of the exposition is the Palace of the Hereditary Prince on Gustav Adolf Square, where the Ministry of Foreign Affairs is today. From the Royal Chamber of Garments came precious garments that used to belong to kings, queens, princes and princesses and were used on special occasions. 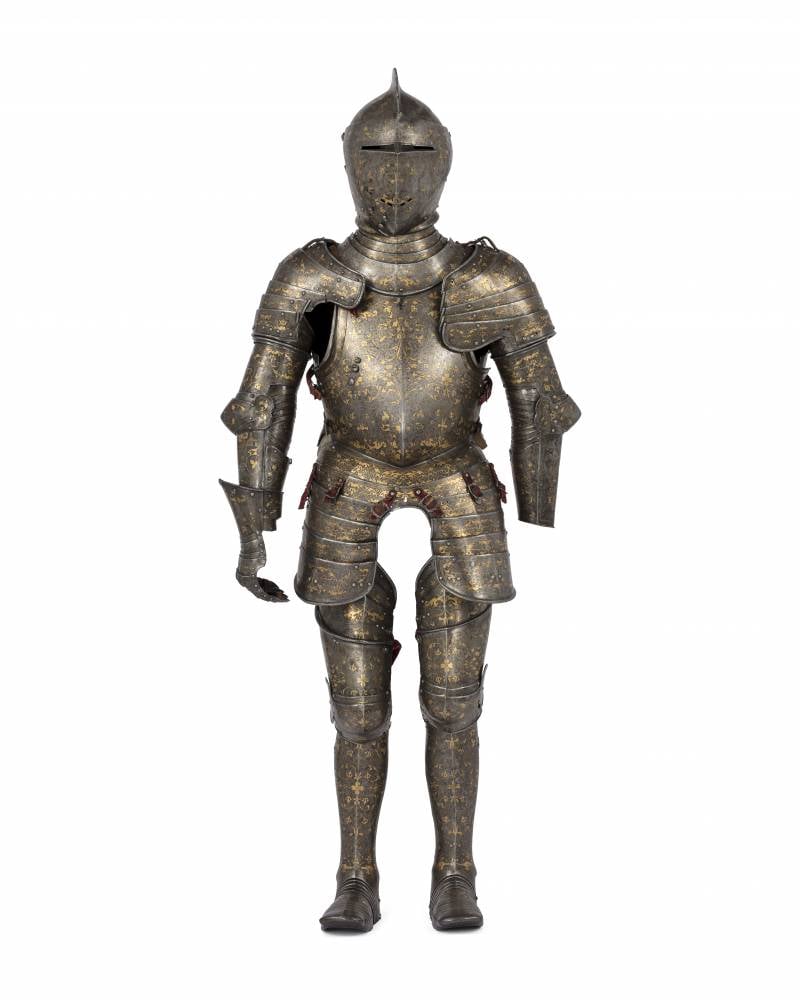 There is also one more armor of King Eric XIV in the collection. Already the third in a row and clearly fighting, as evidenced by the notches on the crest of the helmet and on its visor. It is not as richly decorated as the previous two, but it is quite suitable for participation in hostilities. It is characteristic that the left shoulder pad is much larger than the right one, that is, it is designed to be struck with a spear from this side. The lance hook is missing, but it was, as evidenced by the three holes for its attachment. Royal Armory - Livrustkammarin, a museum at the Royal Palace of Stockholm
At this time, the Armory became a modern museum. Its employees began to search the old archives for documents showing how and when the items got into the Armory and which kings they belonged to. It turned out that much of what was said before about this or that artifact was not true, a mixture of legends and fairy tales. The results of this work were published in books and catalogs, and this was of great knowledge for stories... Personnel were hired to repair, clean and preserve the items stored in the museum, something that no one had ever done before. 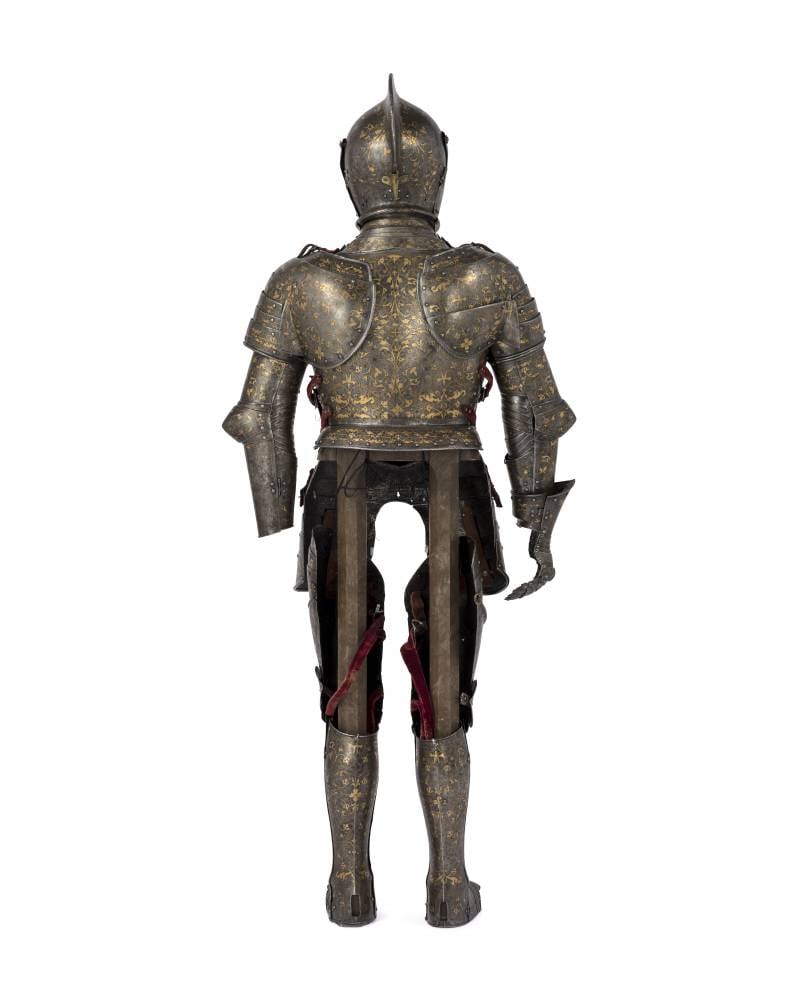 We are still asked questions about whether their armor prevented the knights ... from going to the toilet? No, they did not interfere at all, and this armor just very clearly shows this. As you can see, his seat is not covered with metal at all. There is no metal on the back of the thighs either. That is, nothing prevents him, without taking off his armor ... to do all his business, both in front and behind. Royal Armory - Livrustkammarin, a museum at the Royal Palace of Stockholm
When the royal family needed space in the castle, the Armory was transferred to the Northern Museum in Djurgården. Here, items were exhibited in the main hall from 1906 to 1977.

Finally, in 1978, the Armory returned to Stockholm's Royal Castle. True, only a small part of all the exhibits are on display, all the rest are kept in basements. But they are sent to special exhibitions or donated to other museums.

The Stockholm Armory is believed to have one of the world's finest collections of costumes, weapons, carriages and saddles. So, being in Stockholm, it is undoubtedly worth seeing! By the way, the entrance to the museum is completely free, which, of course, is always very pleasant. There is a radio guide in Russian.