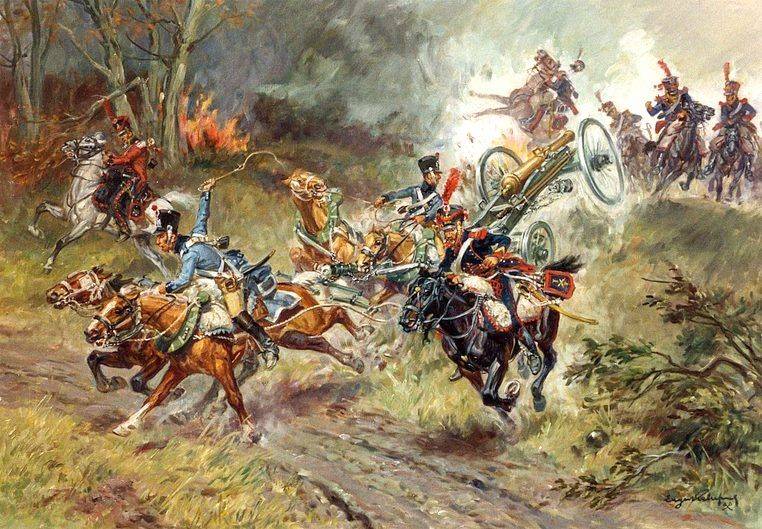 Artillery under fire... Painting by Eugene Laliepvre. In the Napoleonic era, artillery became the main striking force of the French army and acquired an unprecedented prestige.


Napoleon Bonaparte used to say that great battles are won by artillery. Being an artilleryman by training, he attached particular importance to the maintenance of this kind of troops at a high level. If, under the old regime, artillery was recognized as something worse than infantry and cavalry, and in seniority they were considered after 62 infantry regiments (but before the 63rd and subsequent ones), then during Napoleon's reign this order not only changed in the reverse order, but a separate imperial artillery corps.

In the first half of the 1667th century, French artillery was superior to all others, thanks to the fact that France was the first to standardize artillery pieces. The standardization was carried out by General Jean Florent de Vallière (1759-4), who introduced a unified classification system for guns, dividing them into categories from 24 to XNUMX-pounder. The disadvantage of this system was that the guns were strong, but at the same time heavy, which means they were clumsy and clumsy in battle, on the march and in service.

The Seven Years' War proved the superiority of the Austrian artillery, where light 3-, 6- and 12-pounder guns were introduced, as well as light mortars. Other countries followed Austria, especially Prussia.

The loss of France's superiority in artillery persuaded the Minister of War, Etienne-François de Choiseul, to carry out a new reform of this type of troops. He entrusted this task to General Jean Baptiste Vacket de Griboval (1715-1789), who served in Austria in 1756-1762 and had the opportunity to familiarize himself with the Austrian artillery system. Although the conservative military, and especially the son of de Vallière, tried to impede his reform, Choiseul's patronage allowed Griboval to radically change French artillery starting in 1776.

These changes, known as the "Griboval system", meant a complete standardization of not only the guns, but the entire artillery fleet. Not only the guns themselves were unified, but also their carriages, limbers, charging boxes, ammunition and tools. Since then, it was possible, for example, to replace broken gun wheels with wheels from limbers or charging boxes, or even from quartermaster carts.

Another merit of Griboval was that he reduced the gap between the caliber of the gun and the caliber of the nucleus, which up to that time could reach half an inch. With a reduced clearance, the kernels adhered more tightly to the barrel bore, there was no need to hammer wads into the barrel. And above all, it was possible to reduce the charge of gunpowder, while maintaining the firing range. This, in turn, made it possible to cast guns with thinner barrels, and thus lighter. For example, Griboval's 12-pounder cannon has become half the weight of a similar Vallière cannon.

Although the mine companies were part of the artillery units, they formed a separate corps. Mineral companies numbered 82 soldiers each and were stationed in Verdun. Worker companies were assigned to the royal arsenals. Each of them consisted of 71 soldiers. All French artillery was commanded by the first inspector general (general of artillery).

The artillery regiments bore the names of the cities in which they were formed, although by 1789 they could have changed their location to completely different places. The seniority of the regiments was as follows: Strasbourg, Oxon (located in Metz), Tulle (in La Fera), Besancon (in Oxon), Grenoble (in Valence), La Fere (in Douai), Metz (in Besançon).

Each of the seven regiments of foot artillery consisted of two battalions of 10 companies, numbering 55 gunners. The states of the wartime companies were increased by a decree of September 20, 1791 by 20 people, that is, by 400 people in the regiment. On the other hand, the staff of miners and workers' companies decreased - now they totaled 63 and 55 people, respectively. The post of the first inspector general of artillery was also abolished.

Thus, the artillery corps consisted of 8442 soldiers and officers in 7 regiments, as well as 409 miners and 590 workers in 10 companies.

Starting from 1791-1792, the importance and prestige of artillery in the French army increased. This was the only branch of the army that was hardly affected by the desertions and betrayal of the royal officers, which became more frequent in June 1791 under the influence of Louis XVI's attempt to flee to Varennes.

Artillery, a purely technical branch of the army, had far fewer nobles than the infantry and cavalry. Therefore, the artillery retained a high level of combat capability and played a decisive role in the defeat of the Prussian army, which went to Paris in 1792. It can even be said that it was the endurance of the gunners in the Battle of Valmy that decided the outcome of the battle, in which poorly trained regiments, formed from hastily trained volunteers, were not always able to repel the bayonet attacks of the Prussians and withstand the fire of Prussian artillery.

It was as a result of the brilliant resilience of the artillerymen, as well as the growing threat to the borders of the Republic, that in 1792-1793 the artillery corps was increased to 8 foot and 9 cavalry regiments. Horse artillery regiments were assigned to the following garrisons: 1st in Toulouse, 2nd in Strasbourg, 3rd in Douai, 4th in Metz, 5th in Grenoble, 6th in Metz , The 7th in Toulouse, the 8th in Douai, the 9th in Besançon. In 1796, the number of horse artillery was reduced to eight regiments.

Artillery was further developed in 1796. Now it numbered eight foot and eight cavalry regiments, and the number of working companies increased to twelve. Mineral and sapper companies were excluded from artillery and transferred to the engineering troops. And instead of them, a new corps of pontooners was formed - so far only as part of one battalion, located in Strasbourg.

In 1803, in connection with the preparations for the war with England, another reorganization was carried out. Eight foot regiments remained, and the number of cavalry was reduced to six. Instead, the number of workers' companies increased to fifteen, and the number of pontoon battalions to two. A new branch of troops emerged - eight battalions of artillery transports.

The next reorganization of the already imperial artillery corps began in 1804. Then 100 coastal defense gunners were formed, recruited from among veterans whose age or state of health did not allow them to serve in linear units. The same role was played by companies of stationary gunners (sedentaires), located on coastal islands such as If, Noirmoutier, Aix, Oleron, Re, etc. Gradually, due to the increase in the coastline of France, the number of coastal defense companies reached 145, and stationary - 33. In addition, 25 veteran companies were located in fortresses.

In the same 1804 the number of working companies increased to sixteen, and in 1812 there were already nineteen. The number of artillery train battalions was increased to twenty-two. Three companies of gunsmiths also appeared to repair weapons and equipment. Four companies were added in 1806, and five more in 1809.

This organization of artillery was preserved throughout all the Napoleonic wars, only that in 1809 a supply company was added to 22 line artillery companies in each regiment, and in 1814 the number of line companies increased to 28.

At the corps level of the Grand Army, the artillery was commanded by the commandant with the rank of lieutenant general. He was always at the headquarters of the corps and distributed the artillery among the infantry divisions and cavalry brigades, or led them into "large batteries."

Napoleon considered artillery to be the main firepower in battle. Already in the first campaigns in Italy and Egypt, he tried to use artillery to deliver a decisive blow to the enemy. In the future, he tried to constantly increase the saturation of his troops with artillery.

This was the peak moment in the development of French artillery, since the number of guns with which the French could resist the Allies in 1813-1814 was much lower. This was primarily due to the loss of the entire artillery fleet during the retreat from Russia. Despite enormous efforts, it was impossible to restore the former power of the artillery in such a short time.

The number of gunners in the French army grew steadily and noticeably. In 1792 there were 9500 of them. Three years later, in the war of the Third Coalition, there were already 22 of them. In 1805, the Grand Army numbered 34 artillerymen. And in 1814, just before the fall of Napoleon, as many as 103 thousand. However, over time, a significant part of the artillerymen began to be veterans, who could be used only in the defense of fortresses.

During revolutionary wars, there was one weapon for every thousand soldiers. The artillery was small then. And in its ranks it was easier to attract thousands of volunteers from the infantry than to train thousands of professional gunners and give them the appropriate equipment. However, Napoleon persistently strove to ensure that the coefficient of saturation of the troops with artillery was as high as possible.

As the combat effectiveness of the infantry decreased, it was necessary to strengthen it more and more with artillery.