German oil at the turn of the war 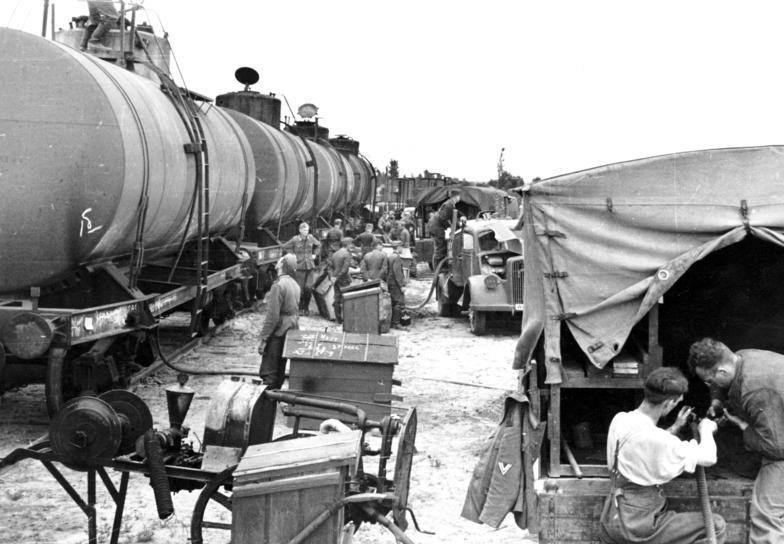 Documentary finds, even in topics that seem to have been repeatedly trodden down, are very interesting and overturning unshakable ideas. Here in the RGVA, in the fund of the Reich Ministry of Economics, I managed to find a document, the importance of which for the military-economic stories Nazi Germany is difficult to overestimate. This is a certificate on the oil balance of Germany for 1941-1943, drawn up on October 31, 1942 (Russian State Archive, f. 1458k, op. 3, d. 458, pp. 4-5).


This is, in essence, a full-fledged oil balance, which takes into account all sources of oil and oil products, all consumption, divided into military and civil, as well as all supplies to allies, dependent countries and occupied territories. A complete picture of where the Reich got the oil from and how it was used.

I have summarized all the figures of this document in a general table in the form of a balance, for ease of review. The data for 1943 are planned, but this circumstance as a whole does not prevent an assessment of the situation. All figures in 1000 tons: 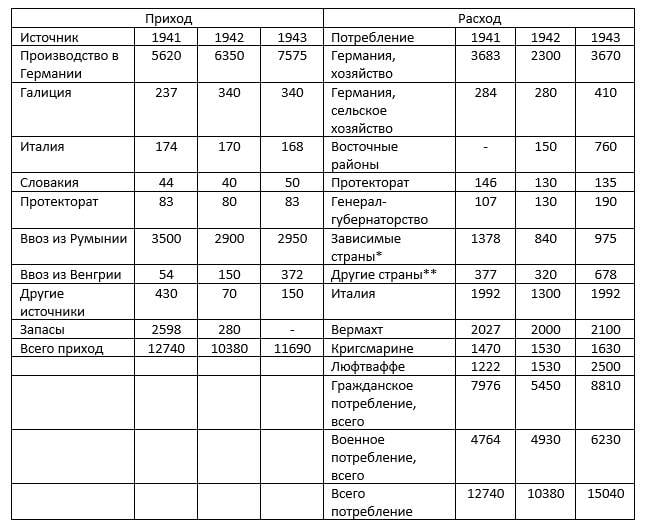 * Norway, Denmark, Holland, Belgium, France, Serbia, Croatia, Greece
** Finland, Bulgaria, Slovakia, Switzerland, Sweden
The figures for 1943 represent an unbalanced balance, so the totals for that year indicate the wishes and the available options. The difference between them was 3350 thousand tons of oil products.

The reference to the import from Romania and Hungary means that these countries covered their oil needs on their own and sold their surplus production to Germany. Italy also had oil and gas production and a dramatic history of struggles to increase production.

В previous articles provided documents with an estimate of Germany's fuel consumption during the war, which were compiled in 1939-1940. Consumption in them was estimated in the range from 6 to 10 million tons. In general, the German experts were not mistaken in these assessments. The actual consumption in Germany, civil and military, in 1941 amounted to 8,7 million tons, and in 1942 - 8 million tons.

At the same time, estimates of the development of synthetic fuel production, which at the beginning of the war amounted to 2,5-3 million tons per year, turned out to be erroneous. In fact, German production of synthetic fuels was twice as large. And already in 1941 it reached 5,6 million tons, accounting for 64,3% of the actual German consumption of petroleum products.

This fuel source increased for almost the entire war, up to May 1944. New synthetic fuel plants were built. As of April 1, 1943, there were facilities under construction for the production of synthetic fuels and oils for 3841 thousand tons per year. And they were to enter service in the second half of 1943 and during 1944 (RGVA, f. 1458k, op. 3, d. 458, l. 2-3). The capacity could exceed 11 million tons, which would cover all of Germany's basic wartime fuel needs. 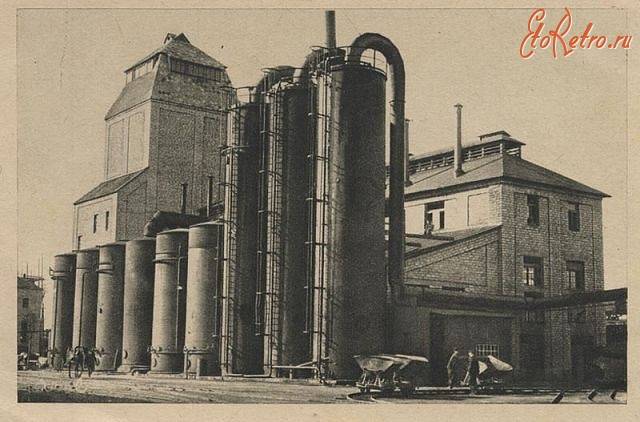 One of the German fuel projects is the oil shale gasoline plant in Kohtla-Järve, Estonia. The factory existed before the war, but the Germans intended to expand it.
This led to the fact that Germany reduced its dependence on crude oil, in particular - Romanian.

By the way, this certificate indicated that the supply of oil products from Romania is facing difficulties. And that this country, having significant domestic consumption, does not want to reduce it and replace oil fuel with coal. The Germans tried to exchange coal for fuel oil, which was used on the Romanian railways, but they got a long, unpleasant and not very productive saga. The Romanians tenaciously held on to their advantage.

Hence the following conclusion follows. The Germans initially relied on synthetic fuels from coal. The coal resources of the Ruhr, Silesia and, in the long term, Donbass were quite enough for them to cover the imaginable military and economic needs.

Redistribution of consumption of petroleum products

The German oil balance, which is in fact also the oil balance of all the countries controlled by Germany, quite clearly shows that the most important measure of balancing this balance was a sharp decline in consumption in the civilian sector.

It would be interesting to see the structure of consumption of petroleum products in industry and the household sector and the changes caused by military mobilization measures. It is possible that such documents will be found later.

However, the reduction in domestic civilian consumption of petroleum products was most likely due to a drop in fuel oil consumption at power plants and its replacement with coal, a sharp decrease in the production of gasoline for private needs and kerosene for lighting, as well as a general decrease in road transport and the transfer of goods to rail and water transport. ...

The neutral countries of Europe in 1938 consumed 9,6 million tons of oil. And in 1941 their consumption amounted to only 1,75 million tons, or 17,7% of the pre-war level. In these countries, partly occupied, partly dependent, partly allied, only the most necessary needs for petroleum products remained, which Germany undertook to satisfy. These are fuel oil for ships, gasoline for cars and aircraft, and lubricating oils. 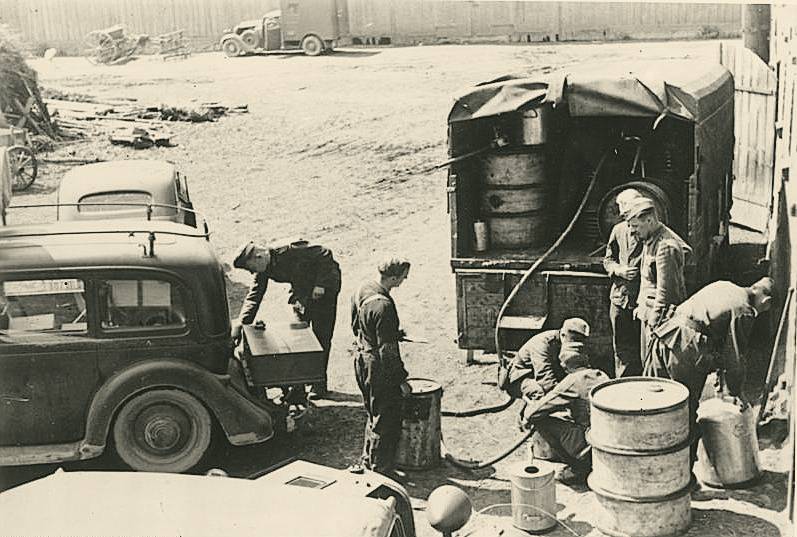 German truck with fuel in occupied Mozyr
Due to this sharp reduction in the consumption of petroleum products in the civilian sector of Germany and in the countries controlled by Germany, it was possible to allocate a quota for the supply of fuel to the German army, fleet и aviation... Essentially, the consumption of petroleum products was significantly redistributed in favor of the army.

Was there a fight for oil?

I mean, it was so vitally important for Germany to seize and use the oil of the Caucasus by all means?

The oil balance of Germany shows - no. There was no vital need to seize the Caucasian oil.

In his the previous article on the Maykop oil seized by the Germans, I concluded that she was not viewed as a source for supplying Germany, at least in the foreseeable future for them. This was a purely analytical conclusion, which turned out to be confirmed by another document.

The certificate on the oil balance of Germany was drawn up on October 21, 1942, that is, even before the end of the battles for the Maikop oil fields. Taking into account the speed of information transfer and the time for preparing the document, the certificate takes into account the state of affairs at best as of September 1942. They had at their disposal the destroyed oil refinery in Krasnodar and the eastern part of the Maikop oil fields. Assuming that from the middle of 1943, 300 thousand tons of oil products from the Caucasus would be received, it was precisely the Maikop oil and the temporary refinery in Krasnodar, which by March 1943, according to the Commander of the Technische Brigade Mineralöl, could produce 600 tons per day or 219 thousand tons per year.

This certificate did not say anything about either Grozny or Baku oil. Most likely, these oil fields were not considered as a potential source of fuel.

Firstly, because they could have been obtained in a badly damaged state (like the Maikop oil fields). There will be nothing to process oil due to the destruction of factories (as well as the Krasnodar refinery). And it will be very difficult to export oil products. Even for the supply of German troops, the export of oil from Baku (in the event of its capture) would have been impossible on a significant scale without the capture of the oil port in Stalingrad and the tanker fleet sailing along the Caspian Sea and the Volga.

Therefore, the Germans, in the situation that developed at the end of 1942, were primarily interested in cutting oil supply lines and isolating the Baku oil-producing region. Perhaps more in its destruction than in its capture and use.

So, the search direction is better to turn to the coal industry and the associated synthetic fuels industry. Since coal was Germany's main fuel resource, this is where one can hope to make interesting finds.