The border ship Sobol was commissioned in Vladivostok 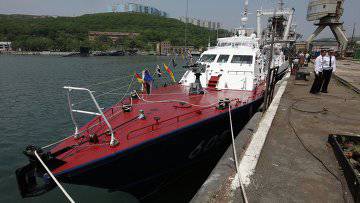 RIA News. The ceremony of raising the naval flag of the coast guard of the Federal Border Service was held on Sunday in Vladivostok on the new guard ship "Sobol", which will first go to patrol the waters of the Russian island, where the APEC summit will be held, and then take over the protection of the maritime state border of the country, told RIA News Representative of the Border Department of the Federal Security Service of Russia in the Primorsky Territory.

The annual 24 meeting of APEC leaders (the Asia-Pacific Economic Cooperation Forum) will be held on September 2-9 in Vladivostok. This is the first APEC summit, which is held in Russia. The total investment in preparing for the summit was about 600 billion rubles.

"The command of the Primorsky regional Border Department of the Federal Security Service of Russia, naval border guards, representatives of the Vladivostok mayor's office took part in the solemn flag raising ceremony," the agency’s source said.

He noted that the Sobol was designed and built in St. Petersburg on the stocks of the Almaz central marine design bureau. The construction was carried out under a state contract. The displacement of the new vessel - 70 tons, develops a speed of more than 40 nodes, the crew - ten people, on the deck - 14,5-mm naval thumb machinegun.