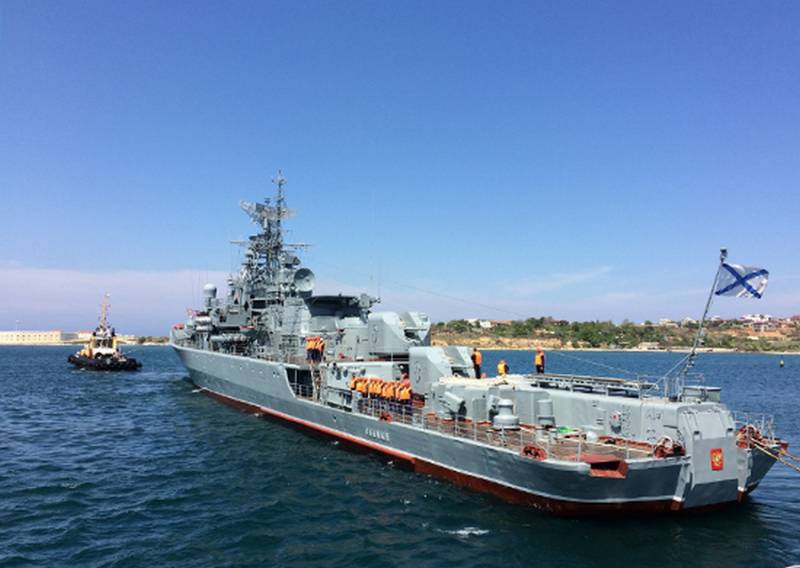 "Veteran" of the Black Sea fleet - patrol ship of project 1135 (code "Petrel") "Ladny" went to sea trials after repairs. This was reported by the press service of the Southern Military District.


Investigative Committee "Ladny" entered one of the Black Sea Fleet's sea ranges, where it will conduct a comprehensive check of equipment and mechanisms, as well as the main power plant of the ship. After completing the exit tasks, the TFR will return to the base, where preparations will continue for the ship's return to the 30th surface ship division of the Black Sea Fleet.

Repair of the Ladny patrol ship began in 2016 at the 13th shipyard in Sevastopol. During the repair, the cruise engines were completely changed on the ship, which had exhausted their resource, and full marching readiness was restored. It is also reported that some changes have been made to the design of the case. There is no information about the replacement of weapons at the moment.

On "Ladny" were installed propulsion engines from the anti-submarine ship "Kerch", which was decommissioned after a fire in 2014. Brand new turbines purchased from Ukraine before the Maidan coup replaced the worn-out Ladny turbines.

Ctrl Enter
Noticed oshЫbku Highlight text and press. Ctrl + Enter
We are
The patrol ship "Ladny" of project 1135 returns to the fleetTurbines, mounted on the "Kerch", rearranged to "Ladny"
Military Reviewin Yandex News
Military Reviewin Google News
46 comments
Information
Dear reader, to leave comments on the publication, you must sign in.