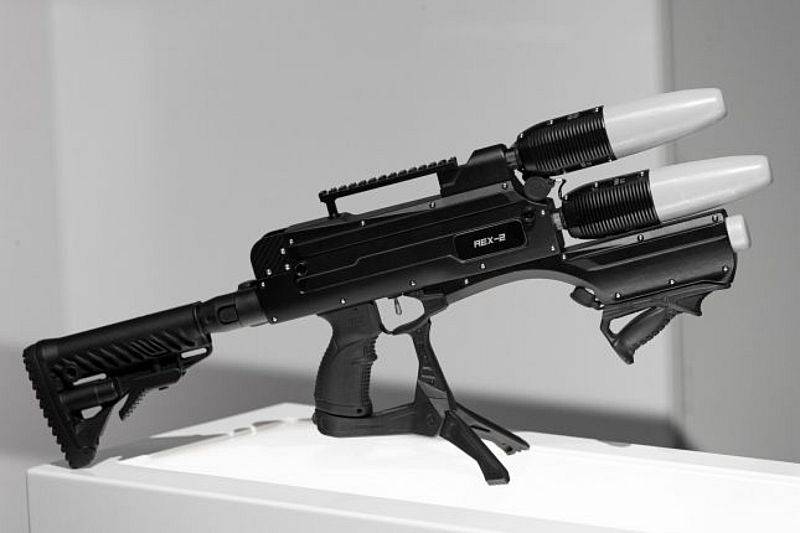 UAVs from promising weapons become commonplace. At the same time, lightweight models of these devices, especially commercial ones, are widely available. Simultaneously with the growth in the spread and use of UAVs, devices are being created to combat them.


On the battlefield, even ordinary quadcopters bought on the civilian market can pose a certain danger. The capabilities of such devices are often sufficient for conducting tactical reconnaissance. At the same time, hitting such UAVs with modern air defense systems is, firstly, extremely problematic, and secondly, it is very expensive.

To combat small-sized shock and reconnaissance drones, specialized devices are being created that can be attributed to electronic warfare equipment. For example, the REX series electromagnetic guns of the Kalashnikov concern can be safely ranked among such developments. Another promising development in the field of countering UAVs is special antidrone missiles, which are being developed by the engineers of the Russian Federal Nuclear Center.

The Kalashnikov concern, which acquired a controlling stake in the Izhevsk-based drone manufacturer ZALA Aero in 2015, gained access not only to unmanned technologies, but also to anti-UAV weapons. Today ZALA Aero is one of the leading developers and manufacturers of drones for various purposes. In addition, the company is also working on the creation of electronic warfare systems that are focused on combating modern UAVs.

Such means of electronic warfare include a whole line of REX electronic guns. The Izhevsk company ZALA Aero has already presented at least two models of non-lethal weapons that can be used to combat drones. These are REX-1 and REX-2 models, both are already actively demonstrated at exhibitions. 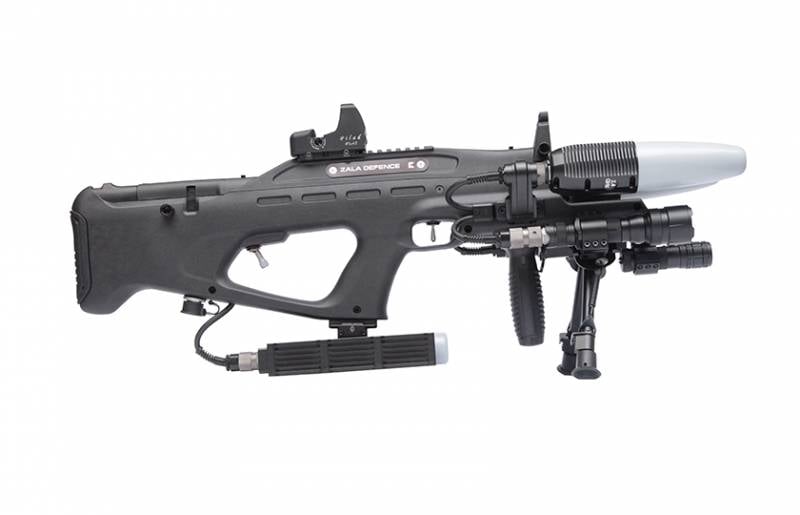 Electromagnetic shotgun REX-1
The REX-1 electromagnetic gun is small in size. In terms of its parameters and weight, the device is comparable to modern models of automatic weapons. The manufacturer declared the weight of 4,5 kg. The built-in battery ensures the operation of non-lethal weapons for three hours.

The device belongs to the modern innovative developments of the Kalashnikov concern. The main purpose of the REX-1 is to protect important facilities and closed areas from intruder unmanned aerial vehicles. This is especially important, since modern air defense systems are not always a guarantee of the destruction of UAVs, and the detection of small unmanned aerial vehicles using conventional electronic reconnaissance means is often difficult.

According to the Kalashnikov company, a special suppression unit is built into non-lethal weapons, which is able to jam the signals of the American satellite navigation system GPS, the Chinese BeiDou, the European Galileo or the Russian GLONASS within a radius of five kilometers (according to kalashnikov.media, on the ZALA Aero website - two kilometers). In addition, at a distance of one kilometer, REX-1 is able to block LTE, 3G, GSM signals, interfering with the running frequencies: 900 Mhz, 2,4 GHz, 5,2-5,8 GHz (on the ZALA Aero website - 0,5, XNUMX km).

Thanks to the listed capabilities, an electromagnetic gun is able to disable enemy drones without physically damaging them. In most cases, a UAV that loses communication with the control panel simply smoothly lowers to the ground. This is typical for widespread civilian and military quadrocopters and small helicopter-type UAVs. 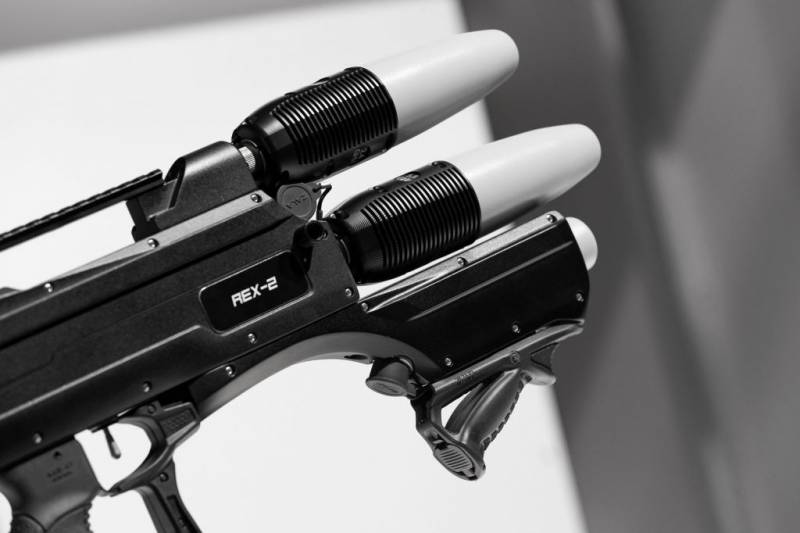 Electromagnetic shotgun REX-2
At the same time, the control of the REX-1 device is quite simple. To bring the gun into a firing position, the fighter only needs to press one button. According to the Kalashnikov concern, non-lethal weapons are equipped with a mounting system that allows additional placement of lights, target designators and various sights, including objective control devices, on the model.

REX-2 and its features

The main purpose of the REX rifles is to protect against light UAVs. At the same time, ZALA Aero is developing its own concept.

Relatively recently, within the framework of the Army-2019 international forum, an enterprise from Izhevsk demonstrated a new version of the REX-2 non-lethal weapon. Many experts recognize this device as the world's most compact anti-drone gun.

The developers refer to the main advantages of the new model over competitors as compact size and light weight. If the first model REX-1 weighed approximately 4,2-4,5 kg, then the weight of non-lethal weapons REX-2 is only 3 kg, and the length does not exceed 500 mm. According to the assurances of the developers, REX-2 is designed to neutralize all types of UAVs, including multicopter-type devices used above the earth or water surface.

Like the previous model, the REX-2 looks like a small arms, but the device does not "shoot" cartridges. Non-lethal weapons fight enemy drones by suppressing radio and satellite navigation signals, which are used in flights by almost all modern UAVs. The lighter and smaller version of the device effectively drowns out the signals of satellite navigation systems within a radius of two kilometers.

The REX developers have provided for the use of non-lethal weapons against various types of targets due to interchangeable modules. Anti-drone shotguns, thanks to their modular design, can be adapted to suit specific tasks. The assembly process of REX guns is facilitated by the presence of the simplest pictograms on the modules themselves. 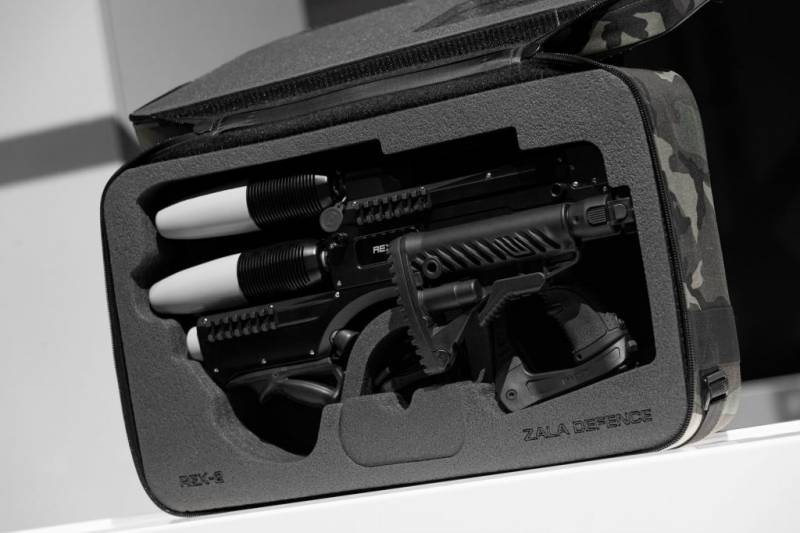 The REX-2's compactness can be judged by its carrying case
For example, a module with a "quadrocopter" image is designed to suppress control channels and information transmission of a UAV. With the image of "satellite" - blocks signals from navigation systems. With the image of the "antenna" - Wi-Fi wireless communication channels. And with the "phone" icon - mobile communications. In the REX-2, the rejection frequencies are customizable, just like in the previous generation model.

Modularity allows REX guns to be used not only to combat enemy unmanned aerial vehicles. It is possible to use these devices to combat improvised explosive devices (IEDs), which are often activated using cellular communications. In case of detection of IEDs or simply suspicious objects, soldiers can use REX-2 to block cellular and radio communications, waiting for the sappers to arrive at the scene.

At the end of March 2021, the Izvestia newspaper published news on the development of a device for combating high-speed drones by specialists of the Russian Federal Nuclear Center. We are talking about the All-Russian Scientific Research Institute of Technical Physics (RFNC-VNIITF). Data on the new development appeared on the official website of Rospatent.

The created antidron missile (according to the description presented) consists of the missile itself with a target guidance unit and a special container with a trap net with weights attached at the corners. The missile delivers a container with a net directly to the enemy's drone, after which a trap net is ejected, which ensures the capture and neutralization of the UAV. It is also reported that the development of one of the divisions of "Rosatom" contains a direction finding unit.

As the developers note, similar projects of drone traps currently existing in the Russian Federation are not effective enough to intercept high-speed vehicles that can perform complex maneuvers in the air. As reported by the RIA Novosti agency with reference to the text of the abstract of the patent, in order to intercept it, it is necessary to catch up with the drone by launching a trap network at an agreed speed. The process for many developments is time consuming and difficult, since high-speed targets can have time to go out of the range of the device. 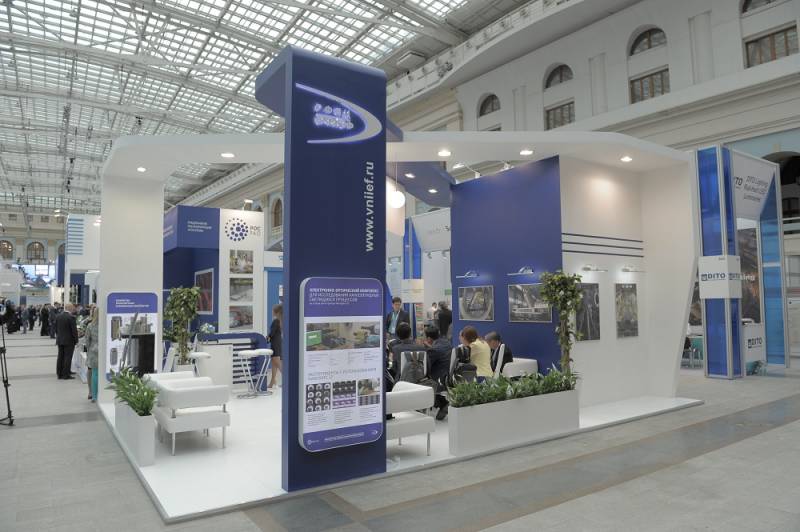 RFNC-VNIITF stand at AtomExpo-2017
The engineers of the Russian Federal Nuclear Center plan to solve the indicated problem by increasing the initial flight speed of the cargo with attached pulling lines connected to the trap net. Experts plan to achieve this by lengthening the throwing barrels, from which the loads fly out. This should lead to a reduction in the deployment time of the trap network to neutralize the high-speed UAV.

Work on a promising anti-drone countermeasures continues. The process of developing the necessary technical documentation for a new product is underway. Production and preliminary testing of prototypes is planned to assess their capabilities to combat high-speed drones. At the same time, Rosatom assures that the development efficiency is confirmed by the results of calculations.

It is worth noting that the first models of anti-drone missiles in Russia were demonstrated back in 2019. A story about such a development was aired on the Zvezda TV channel. The sample then demonstrated was also distinguished by its simplicity and was not a carrier of explosives. Shown two years ago, the development was a kind of kinetic ammunition. The defeat of the drone was carried out directly by the ram.