Nevoyna in Donbass: oddities and passions 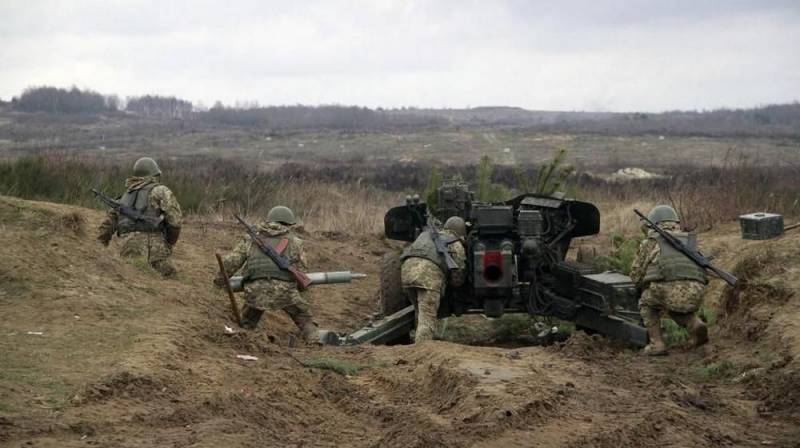 Yes, the fact that the next bloody round did not happen in Donbass is just wonderful. This is an endless feeling of joy for those who did not die, were not crippled, did not lose loved ones, relatives, friends, home and so on.

And the question arises: why is this?

We saw how the situation was gradually heating up, over the course of two months the topic of Donbass began to sound louder and louder, reaching at its peak the familiar theme "We will tomorrow ...". The troops were shuffled on the maps, more and more loud statements, comments, expert opinions, forecasts were made.

Even the dates of the "Ukrainian offensive" were given. With links to various sources, there is no point in citing them, because 99% of these dates and forecasts turned out to be an empty shake of the air.

It's simple. Friends from the DPR explained to me, they gently showed me where the information about the impending "offensive" came from for the first time.

And for the first time, they started talking about the imminent offensive not in the headquarters, but in the DPR Ministry of Information.

There is nothing surprising in the fact that Antipov's department reacted in this way, since the efficiency of this ministry has long been well known to us.

In general, the first deputy minister of information of the DPR, Daniil Bezsonov / Goodwin, came out and started talking about what "is about to begin." And he named the date. March 15th.

Evil tongues assert, however, that Goodwin was based not on intelligence data, but on the fact that Mr. Gordon, also well-known to us from the other side, launched on his resources. But what to take from ukrozhurnalist, Gordon banged at random, but it turned out.

However, Gordon and Goodwin do not command real troops, and the couches are not very popular here. Therefore, as expected, nothing happened on March 15. I had to dodge. And on a blue eye, Bezsonov gave a stunning version that the ukroarmiya "was squeezed by the forces of the LPNR."

Wow ... How not to remember the immortal Yaroslav Hasek, "Di erst to the marshirt column, dictate to the marshirt column ...". And the troops of the two republics squeezed the entire Ukrainian army marching in columns in that area in a dead vise, and only the immediate flight of the Ukrainians saved them from another Debaltsev.

Fun? Well yes. especially if you just compare the numbers of troops and equipment in the republics and the Armed Forces of Ukraine and estimate the possibilities.

But the war did not take place.

Actually, nothing like that. The war was scheduled for a different date. We did without Gordon as a source of information, we managed it ourselves. It is difficult to say what went into use, cards, runes, coffee grounds, but they sounded on April 2, 3, 4.

These days have sunk into oblivion, the offensive has not happened. Why and what caused the cancellation have not yet been announced. Apparently, they haven't come up with it yet. Let's wait, because we are in no hurry.

But what is the essence?

In essence, there was a kind of semi-political action. All these transfers of forces of the Armed Forces of Ukraine and movements on the line of contact pursued one and only goal: to support Zelinsky's statement.

More precisely, a request. The President of Ukraine voiced his desire to communicate with his Russian counterpart. And as a reinforcement of his Wishlist, he preferred to flex his muscles (God, forgive me, but some kind of laughter) of the Armed Forces of Ukraine.

The reaction was not only natural, it was already like a carbon copy, copied and pasted with “control”. That is, first the real perturbations of the Minsk agreements, then everything else.

It is clear that no one is going to do anything about Minsky. Never. Under no sauce. But the topic of sending the President of Ukraine towards Minsk with his wishes is quite normal. That is, the Minsk agreements may still be useful for something.

But the maneuvers of technology, the muscle play of the Armed Forces of Ukraine, which causes laughter, is nothing more than a political demonstration. And it was intended both for Russia, with the president of which Mr. Zelensky so wanted to talk, and for Western partners. Specifically - for Mr. Biden. I hope there is no need to explain why exactly for him.

But the sudden exercises that began in the Crimea (which he himself witnessed) were both larger than the Ukrainian movements, and more useful, since they shook everything seriously.

Plus the beginning of the movement of green mass in Belarus.

And here's the result for you right away - Biden gets in touch with Zelensky. It was not the movement of the Ukrainian Armed Forces that caused this, but the Russian army, which began to move in Crimea and Belarus.

But also the result, whatever one may say. Better than nothing. Putin did not notice - Biden noticed. So it's okay.

But what began later surprised and surprised me in earnest. The meeting is almost in the Normandy format, but for three. Russia, Germany, France.

What does this mean? About much. First of all, that no one in Europe takes Ukraine seriously. In Europe they just want to live in peace, dealing with their refugees from the Middle East in the worst case scenario. And inadequate Ukraine, to put it mildly, is of no interest to anyone.

And in the same way, no one is interested in two pieces of land, unrecognized republics of Donbass. The lot of which will remain in the eyes of the world community ORDLO and nothing more.

Moreover, even in ours, and what is there, even in our media, you can increasingly read expressions of dissatisfaction. How much, do you understand, you can about Donbass and Ukraine? There is nothing more to write about, right?

It is possible and necessary to talk about the tragedy.

We will have a conversation about Crimea in the very near future, fortunately, I have taken a lot of impressions and information from this area.

But now it is appropriate to mention Crimea in the sense that a STRATEGY of the highest order was implemented there. And this is not my opinion, Putin said it in that very famous film.

Strategy. And now it is simply inappropriate to talk about some kind of “general unity” of Crimea on the way to Russia. And whoever wants to, he can remember the clashes between Russians and Tatars. The latter wanted so much to Russia that representatives of the Tatar communities of Russia came to agitate or buy them more than once.

Yes, and the statements of Mr. Aksenov before he became vehemently pro-Russian is also appropriate to remember.

Everything has its own price.

And there is a price for the Donbass scenario. The cost of the tragedy, which claimed many lives, Donbass, Russian, Belarusian, Kazakh - Russian lives.

And today all this turns into outright farce and games.

What for? For what?

All these fantasies, zapoloshny screams? As in the famous parable of the shepherd boy and the wolves ...

I get the impression that all this is being done precisely so that when it really becomes terribly difficult and unbearable, everyone who could help and lend a helping hand again will just wearily turn away from the screens with the words “Come on, here it is again ... ".

Seven years. Seven years of what? Nonsense, meanness and betrayal. Yes, the killing of those who by their deeds helped the republics survive is a betrayal.

The transformation of the Donbass tragedy into a line in news tape is a betrayal. Attempts to make everyone do not care about everything that happens there is a betrayal.

This is the betrayal of those who died there. This is a betrayal of the very idea of ​​the Russian world, which was protected from the sticky paws of the Terbats.

Donbass will remain as much of our pain as Chechnya.

We cannot betray ourselves and listen to those who try to do this. Otherwise, they just might succeed one fine moment.

It is necessary to listen to information from there. The whole question is who it should come from, this information.