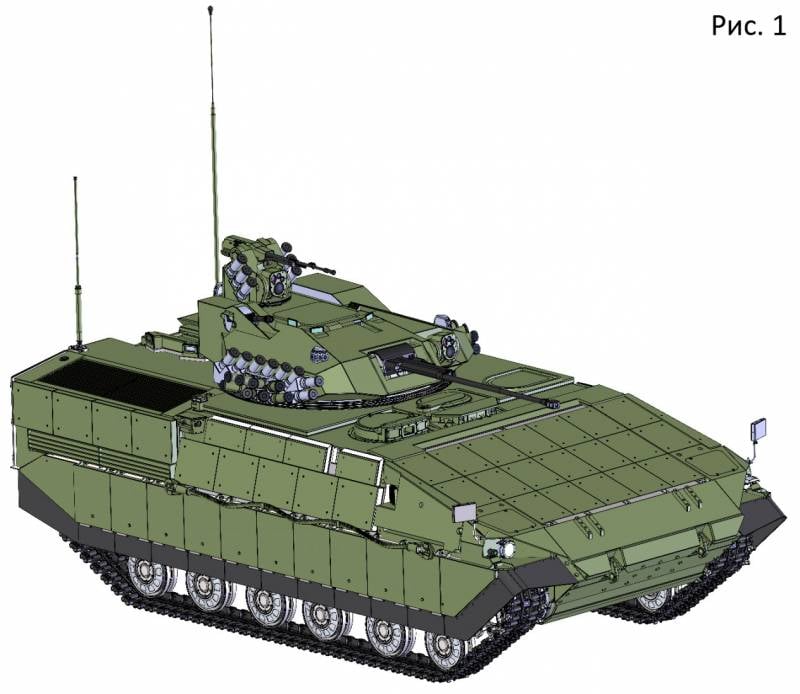 Ukrainian industry is again trying to create a new model of an armored combat vehicle. This time we are talking about a heavy infantry fighting vehicle (TBMP) based on the existing tank chassis. The project called "Babylon" proposes to use a number of modern and bold solutions, which are expected to provide high combat and technical characteristics. Great hopes are pinned on the project, but its real prospects are still in question.

At the end of 2019, Ukroboronprom Concern and Engineering Group Arey signed a memorandum of cooperation. In accordance with this document, the Arey group should develop new projects of armored vehicles for the Ukrainian army, and the state concern will ensure their implementation. The first result of joint work should be TBMP "Babylon".

The development of "Babylon" began at the turn of 2019-2020. By now, some design stages have been completed. The main design features have been determined, and separate units and assemblies have been created. As stated, the project uses the most modern ideas and solutions capable of providing high technical and combat characteristics.

Currently "Arey" continues designing and is already testing individual units. Studied the characteristics of the reservation; preparations are underway for testing other units. In particular, it is necessary to work out the power plant of unusual architecture.

In the future, the Kiev Armored Plant will have to build a full-fledged experimental TBMP. Based on the results of its tests, the issue of launching the series and adopting it will be decided. At the same time, the timing of the completion of the project and the receipt of serial vehicles in the troops are not specified - and, probably, remain unknown.

The Babylon project is based on some interesting ideas. So, for the first time in Ukrainian practice, an armored vehicle is initially created taking into account NATO standards. At the same time, the components of Soviet / Russian standards are retained - mainly weapon.

The basis for TBMP is the chassis of the serial main tank T-64 or T-84, subject to serious processing. The use of a hybrid diesel-electric power plant with a wide range of possibilities is proposed. The chassis remains the same. The most automated complex of weapons based on digital control systems is being developed.

The chassis of the Babylon TBMP will be universal. Instead of the standard cannon and machine gun module, it will be possible to install other fighting compartments, incl. borrowed from old self-propelled guns. The combat module of the heavy infantry fighting vehicle will also be compatible with other carriers. 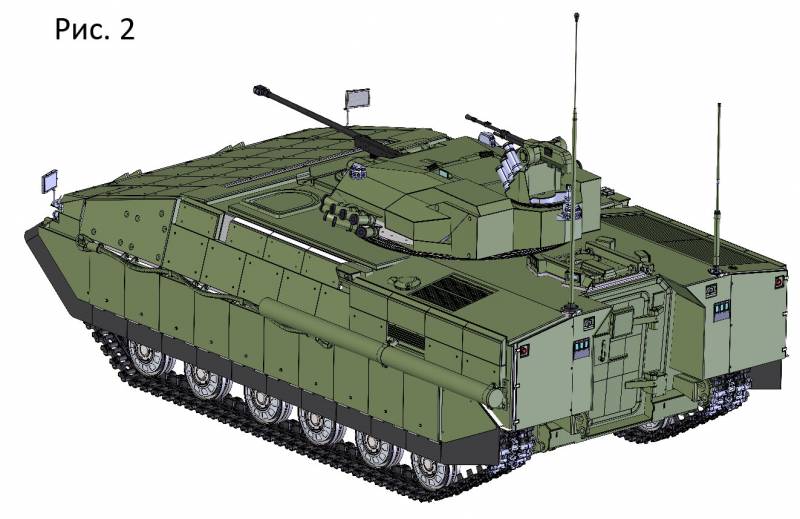 The Babylon project is distinguished by a high degree of novelty. More than 200 new components have been announced. Probably, we are talking about the development of our own parts and components to replace imported samples that are no longer available for political reasons.

Published several images of "Babylon" - a three-dimensional model and a prototype. They show that the project involves the construction of a well-protected vehicle with a number of expected features and some interesting features. Externally, TBMP is generally similar to some existing samples.

The TBMP hull is made using spaced armor. In addition, frontal and side projections are equipped with overhead elements. It offers a double bottom for protection against mines and additional internal armor elements that cover the crew and troops. It is argued that the layout of the hull booking successfully withstood the shelling from a 30-mm cannon from a distance of 200 m and the hit of a 125-mm sub-caliber projectile from 500 m.

A hybrid power plant is being developed for Babylon. The aft compartments of the hull house a Deutz TCD16.0V8 diesel engine with a power of 768 hp. and a generator. Two traction electric motors of 500 kW each are located in the bow, and batteries are located on the bottom of the hull. Several modes of operation are declared, providing for the separate or combined use of diesel and electric motors. In addition, TBMP will be able to supply electricity to external consumers. The power plant has an integrated climate system.

The new TBMP will receive a manned fighting compartment with a developed weapons complex. The swinging tower mounts a 30-mm 2A42 cannon and a 7,62-mm PKT machine gun. On the roof of the tower there are mountings for a 40-mm UAG-40 grenade launcher and Barrier missiles. The design of the turret allows reloading of weapons from the inside, without the need to leave the protected volume. On the roof of the tower it is proposed to install an additional combat module with a large-caliber machine gun.

The tower and combat module will receive optoelectronic units for finding targets and aiming weapons. A digital fire control system with weapon stabilization, remote control from operator stations, etc. is being developed.

TBMP will receive the so-called. a unified control complex, which will include a traffic control system, an OMS, a circular view and communication devices. All control will be carried out from three automated workstations of the crew. The use of a single complex is expected to simplify movement and weapons control, when working independently and as part of a unit.

The crew of the "Babylon" in the configuration of a heavy infantry fighting vehicle includes three people. The driver and commander are inside the hull, the gunner must work in the turret. The troop compartment will be able to accommodate eight soldiers with embarkation and disembarkation through the aft door. "Anatomical" energy absorbing chairs with various adjustments are offered for use. Inhabited compartments must have a climate system.

The prototype of "Babylon"
In terms of its dimensions, the promising TBMP will not be inferior to the T-64 base tank. Combat weight is declared at the level of 36 tons. It is supposed to provide high mobility and maneuverability on land. With the help of equipment for underwater driving, the armored vehicle will be able to cross water obstacles.

At the heart of the Ukrainian project TBMP "Babylon" are the most daring ideas, incl. not yet widely used in world practice. It is believed that this will make the new armored vehicle one of the most efficient and advanced in the world. The project has already been brought to the stage of testing individual units, and in the foreseeable future it is planned to build a full-fledged prototype.

The proposed appearance of the combat vehicle is of some interest. So, it corresponds to the ideas of recent times about reducing the potential of "conventional" infantry fighting vehicles and the need to create heavy vehicles of this class. The project provides for a high level of protection and firepower. The hybrid power plant has well-known operational and technical advantages. Also an important feature of the project is a unified management complex.

However, the outlook for Babylon in terms of production and operation remains uncertain - and there is no reason for optimism yet. This project from the "Arey" group may face the same problems as the mass of other modern developments in Ukraine. In recent decades, the Ukrainian industry has offered a large number of various types of armored vehicles, but only individual products were brought to the series, and the pace of production left much to be desired.

All this was due to a chronic lack of funding, organizational problems, general degradation of industrial potential, etc. By now, despite some insufficient measures, the situation as a whole has not changed. As a consequence, any new project, including Babylon, risks repeating the fate of previous developments.

Such problems are exacerbated by the excessive novelty and boldness of a promising project. The authors of "Babylon" will have to work out a number of solutions and components, and then set up the production of all new unusual systems. It will require not only the creation of a new production line, but also the establishment of cooperation with subcontractors, which can be overwhelmingly difficult.

Taking into account the known factors and objective difficulties of modern Ukraine, one can imagine what the future of TBMP "Babylon" will be like. Apparently, "Engineering group" Arey "and" Ukroboronprom "will be able to complete the development work. Not only a mock-up, but also a full-fledged prototype will be built.

However, the future of the project is vague and not conducive to optimism. If "Babylon" can be brought to a series, then the Ukrainian army will not have to rely on a large number of such equipment. Heavy infantry fighting vehicles will be difficult and expensive to manufacture, which will limit its production. Even an optimistic scenario allows expecting only dozens of serial armored vehicles. However, given the current views and plans of the Ukrainian leadership, the lack of modern effective armored vehicles and the possibilities for its release should be considered positive factors.