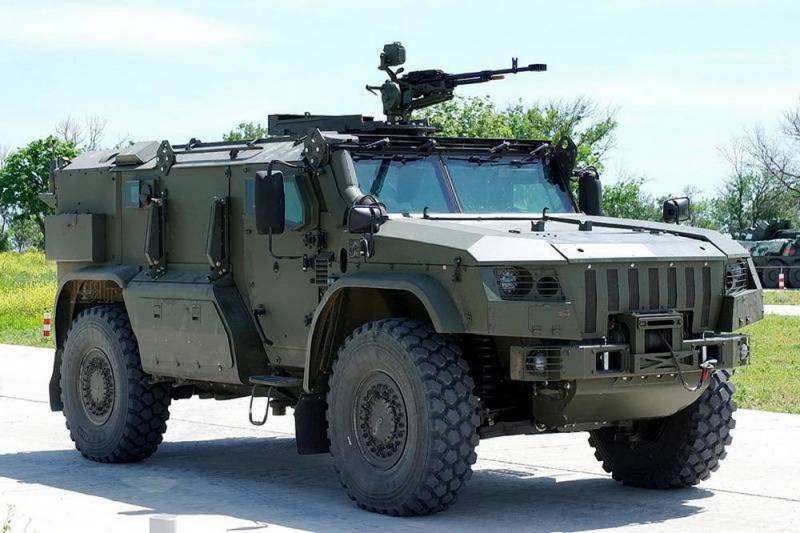 The Ministry of Defense has announced the demonstration of the newest armored vehicle K-4386-Air Defense "Typhoon-Air Defense". As stated in the military department, an armored car designed to transport MANPADS calculations will be presented to the general public for the first time at the Victory Parade, which will be held on May 9 on Red Square in Moscow.


The military department explained that the "Typhoon-VDV" armored vehicle will pass as part of a mechanized convoy across Moscow's Red Square. In addition to the novelty, four more representatives of the Typhoon armored vehicle family will participate in the parade, which ones are not reported.

The mechanized column also includes five types of armored vehicles of increased security of the Typhoon family, and the Typhoon-Air Defense model will be held on Red Square for the first time
- said in a statement.

Gross weight - 14 tons. Engine - 350 HP, max. speed - 105 km / h, cruising range - up to 1200 km. Crew of 5 people: driver, crew commander and 3 gunner of MANPADS crew. The armor provides protection against large-caliber bullets and detonation under the bottom of 4 kg, and under the wheel - 6 kg of explosives (in TNT equivalent).

The main purpose of the Typhoon-Air Defense armored vehicle is to cover military convoys, mechanized groups on the march and in parking areas, as well as to quickly change the positions of the crews of mobile anti-aircraft systems. In addition, the vehicle can be used as a commander or communications vehicle.
Ctrl Enter
Noticed oshЫbku Highlight text and press. Ctrl + Enter
We are
The Ministry of Defense showed a new armored car K-4386-Air Defense "Typhoon-Air Defense"Reports from the militia of New Russia for 27-28 September 2014 of the year
Military Reviewin Yandex News
Military Reviewin Google News
46 comments
Ad