Do we need such a memory?


But I would like to start with a little abstract topic. 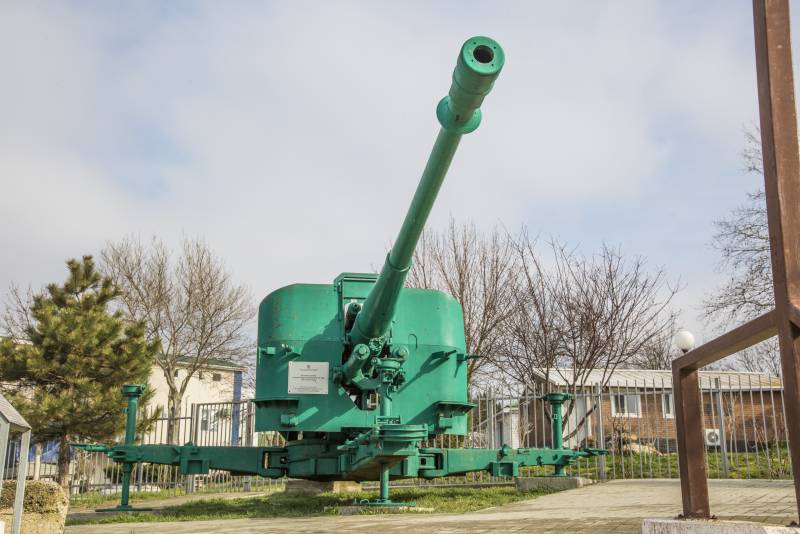 I have been stirring the topic of memory and monuments for a long time and I simply will not let it fall. Actually, they didn’t put it, this topic, in order to take it and drop it. "The people who do not remember the past ..." and so on.

It so happened that I chose Anapa as the place of temporary deployment for several reasons at once, and made raids to the Crimea.

It so happened that quite close to the PPD on Gorky Street, I immediately discovered something resembling a memorial. Found - must be examined for an item. I took my camera and went. 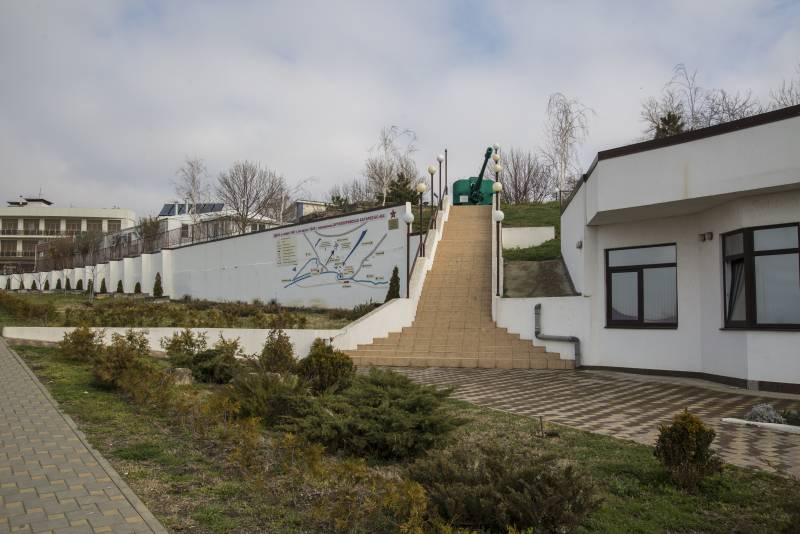 Honestly, sometimes the initiative is not just a punishable case, but punishable in full.

The first thing that catches your eye is the tool and the scheme. 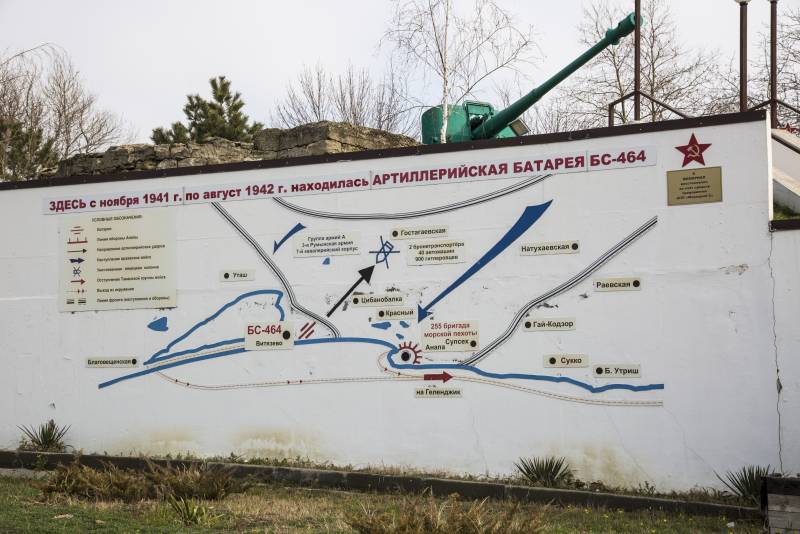 The scheme is absolutely correct, there are no complaints about it. But further ...

Let's get a little stories?

The first character in our history is the Shahumyan destroyer. 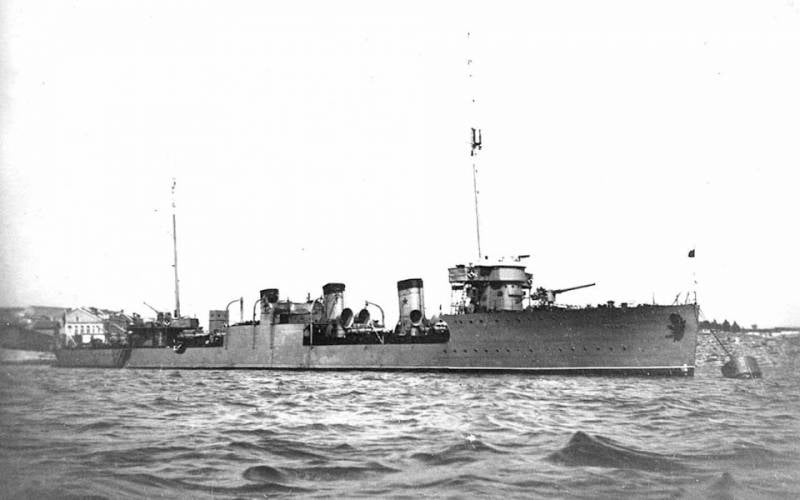 The destroyer is conditional, because when it was laid down, yes, the ships of the Fidonisi type, the Black Sea relatives of the Noviks, were destroyers. But by 1941, the "Shaumyan" could be considered a destroyer with a huge stretch.

Laid down in 1916 as Levkas, it entered service only in 1925. Displacement 1580 tons (full), speed 36 knots, cruising range 2 130 miles at 18 knots. The armament consisted of four 102-mm guns. Anti-aircraft armament consisted of four DShK machine guns with a caliber of 12,7 mm. In addition, the ship carried four 457 mm three-tube torpedo tubes. Crew of 9 officers and 127 sailors.

The destroyer was laid down as "Levkas", since January 1919 it was renamed "Ivan Sirko", since February 5, 1925 it became a part of fleet like “Shahumyan”. 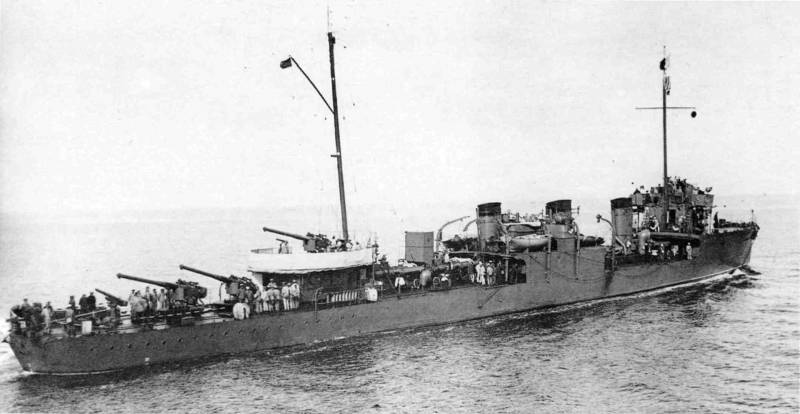 With the beginning of the Great Patriotic War, "Shahumyan" took part in mine laying, escorting transports and the defense of Odessa. From the beginning of November 1941 he took part in the defense of Sevastopol. On December 28-29, 1941, the destroyer landed troops in Feodosia, January 15-16 and January 24-25, 1942 troops in Sudak. February 28-29 - landing in Alushta.

On April 3, 1942, in a heavy snowfall, "Shaumyan" was crossing from Novorossiysk to Poti. Due to gross violations of the rules of navigational service, the ship ran aground near Gelendzhik in the area of ​​Cape Tonky. During the accident, the ship broke through the bottom and lay down on the ground.

It was not possible to remove the ship from the stones, subsequently the ship was completely destroyed by storms and German aviation.

But the 102-mm guns of the Obukhov plant with ammunition were removed from the ship, transported to the shore and used to form the coastal battery No. 464. 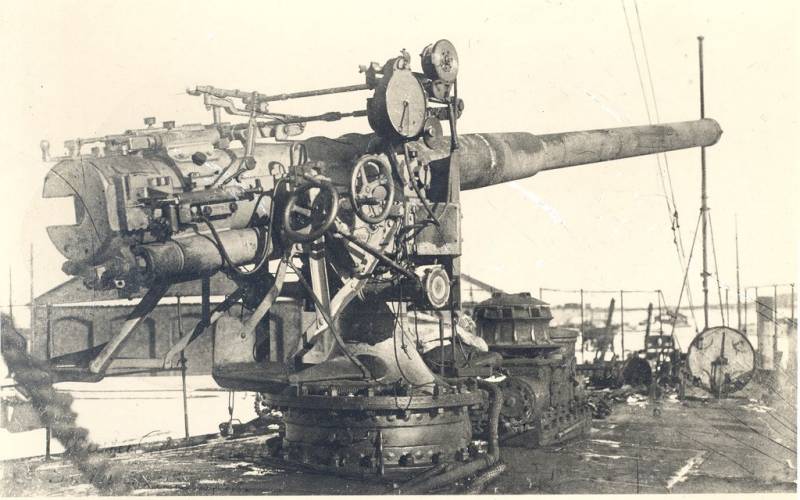 The destroyer gunners were also sent there along with their guns.

August 1942. The battery was fully formed and ready for battle. It so happened that the calculations of the battery guns turned out to be the last defenders of Anapa. The combat mission was set to delay the enemy's advance in any way.

The choice was small, in fact, the only one - to fire on the enemy until the full use of the ammunition of the guns. That is, 1000 shells.

The battery was commanded by senior lieutenant Belokhvostov.

On the morning of August 30, 1942, the guns of "Shaumyan" opened fire on the column moving towards Anapa from the direction of the Gostagaevskaya stanitsa. tanks and enemy vehicles. The tankette, the gun and about 20 vehicles with infantry and cargo were destroyed, and the enemy's movement was stopped.

The Germans retreated, being completely unprepared for the fact that 102-mm shells would fall quite accurately and carry death. And for the naval gunners, it was easier to shoot from a fixed platform than from the deck of a small destroyer. So the result was quite predictable.

On the morning of August 31, the Germans again left the village of Gostagaevskaya. At 9 am the battery opened fire again. They did not spare the shells, the outcome of the battle was clear to all the Red Navy men, there was nowhere to retreat.

The Germans stopped their offensive towards Anapa and moved part of the equipment and personnel directly to the battery. The battle went on almost all day. By 17 o'clock, the 464 battery was completely surrounded.

The commander of battery 464 Belokhvostov decides to destroy all documents, blow up the battery and break through to the village of Blagoveshchenskaya, where the boats were waiting for evacuation.

The cover group of the spotter commander Sharoglazov remained on the battery. The rest of the personnel under the command of Belokhvostov withdrew in battles along the Vityazevskaya spit to the village of Blagoveshchenskaya, was taken on boats and taken to Gelendzhik.

Having shot all the ammunition, the remnants of Sharoglazov's group (16 people) were captured during the retreat, the rest (about 30 people) died or disappeared without a trace.

In total, the battery destroyed 20 vehicles and about 900 Germans. The Nazis captured Anapa and adjacent villages. 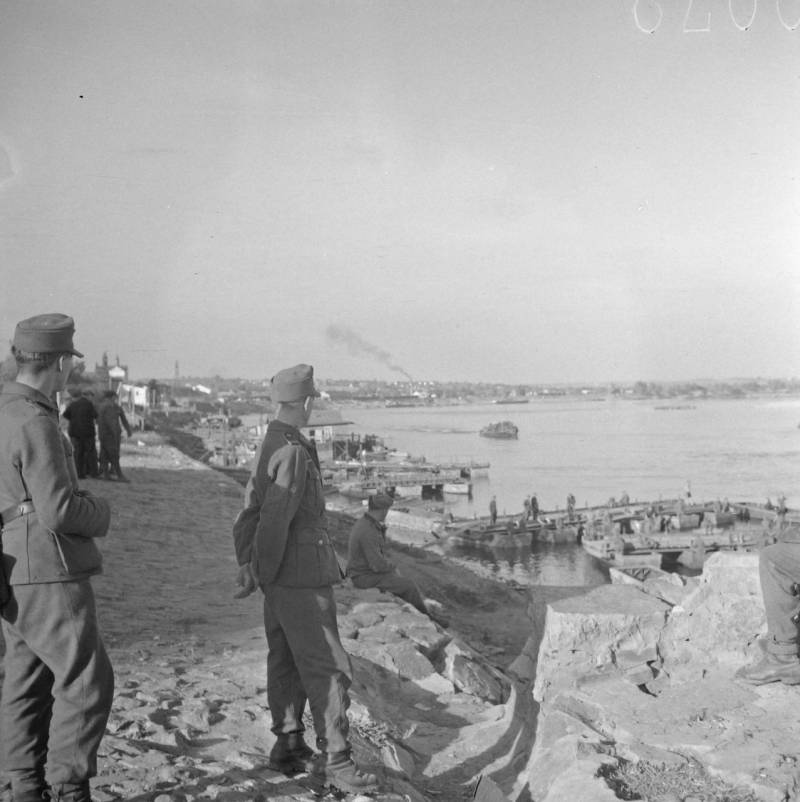 Two days of combat work of the battery. An episode of that war.

And this is what we have today. 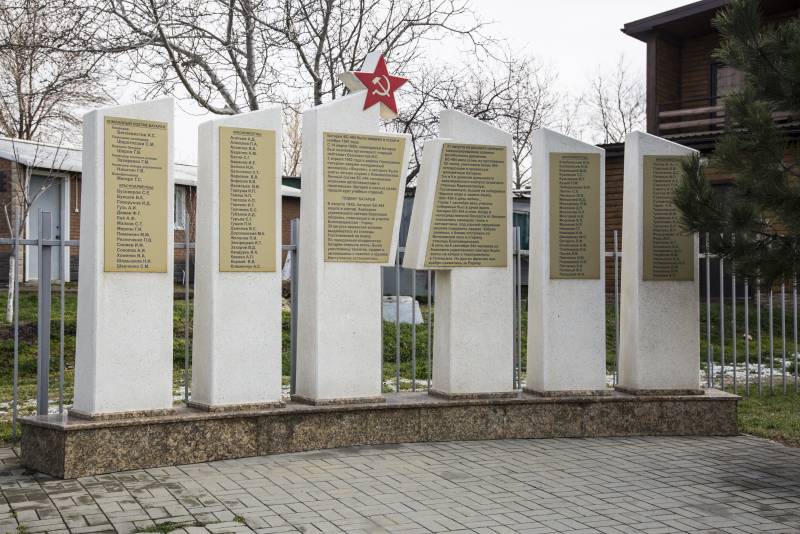 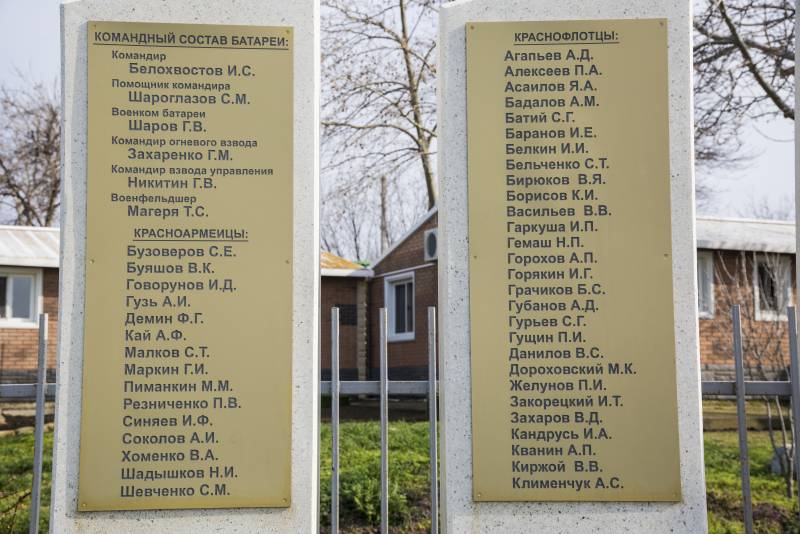 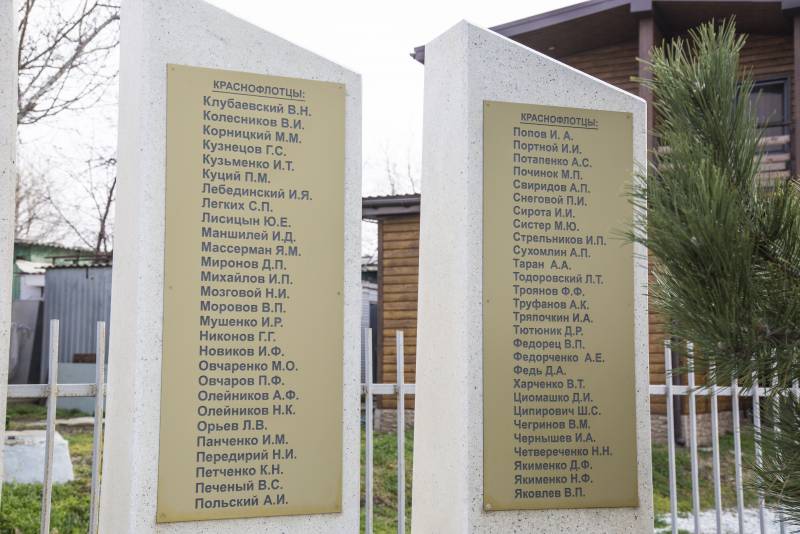 It's just wonderful that history has preserved and brought to us the names of those who fought in these positions.

It is wonderful that the place where the 464 battery stood is not forgotten and this very nice square was created on it. Clean, well lit in the evening and cozy. 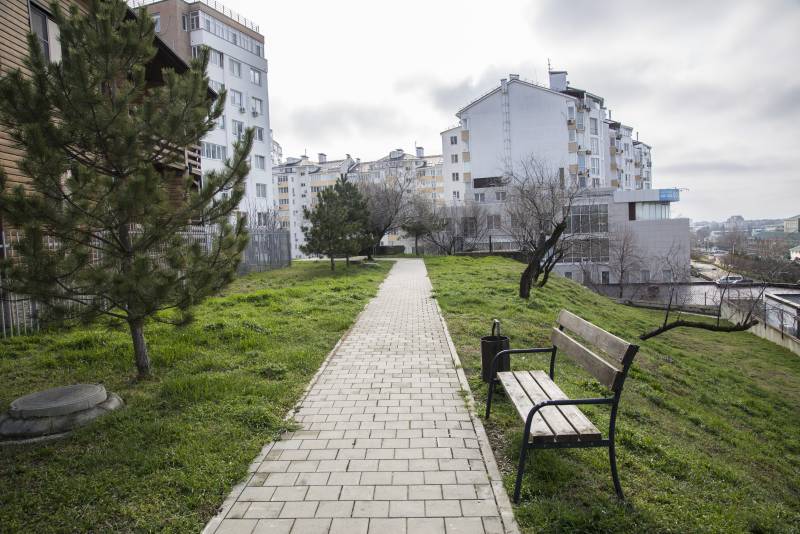 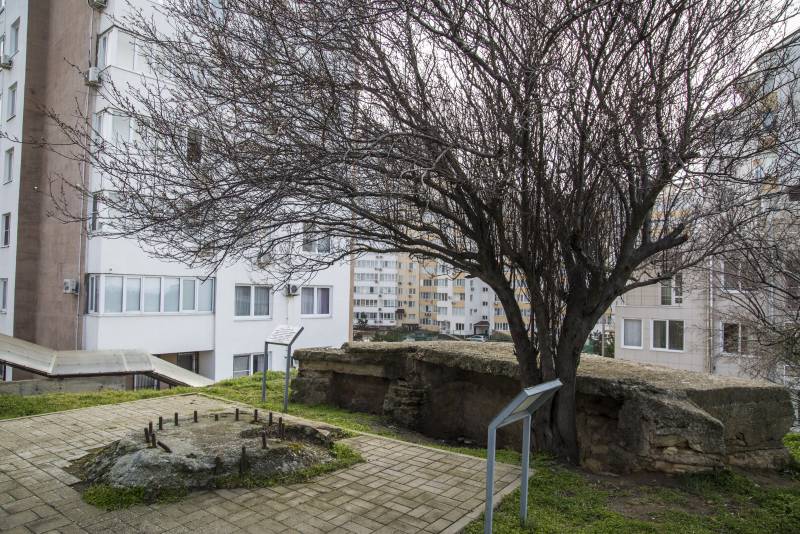 This is a good memory.

What's bad is the way it is all done. 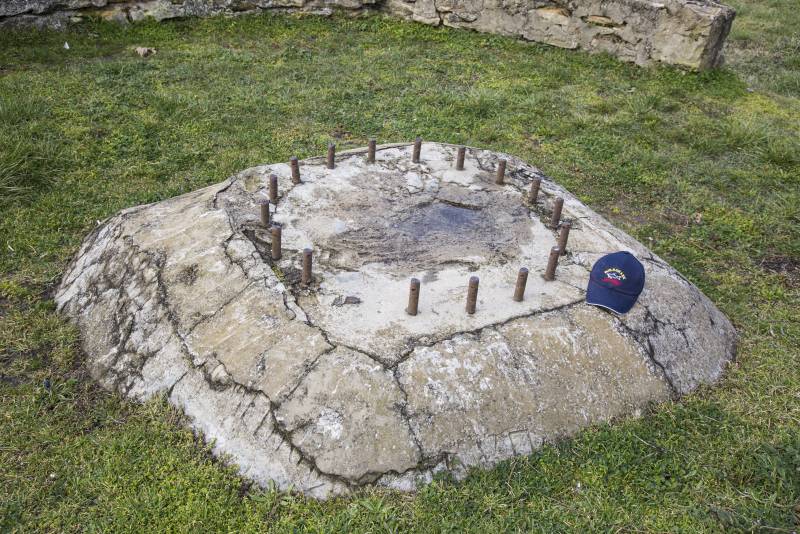 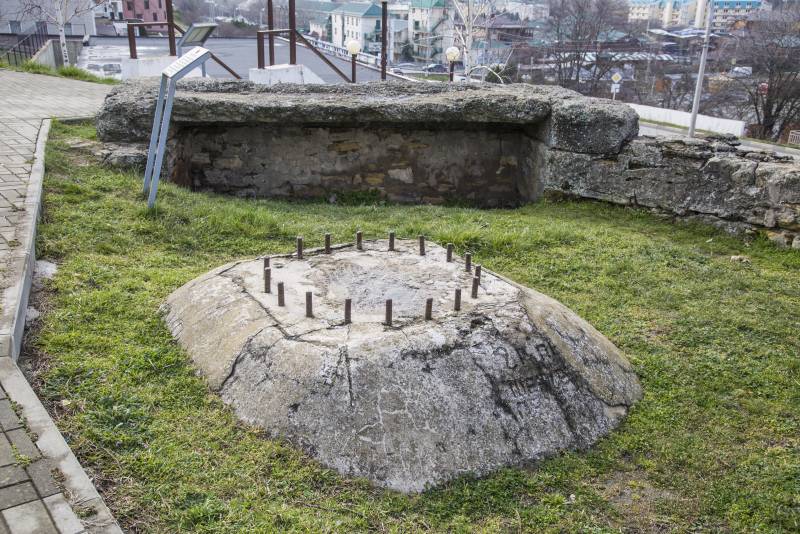 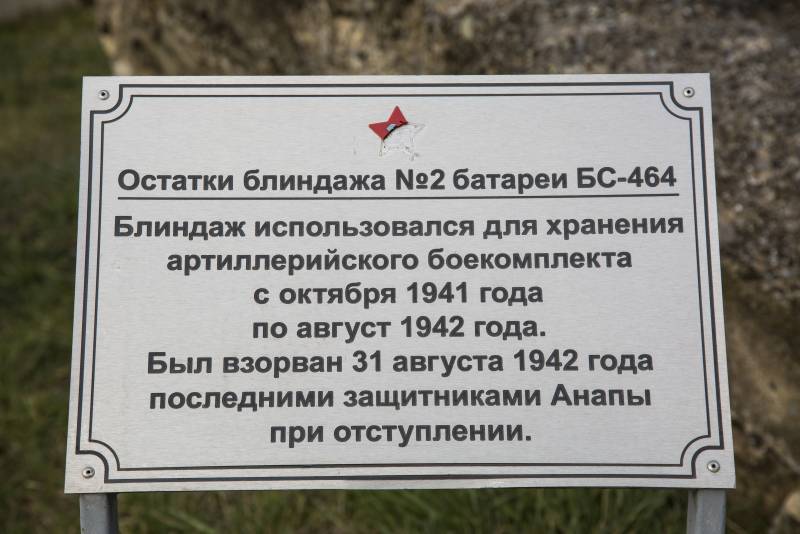 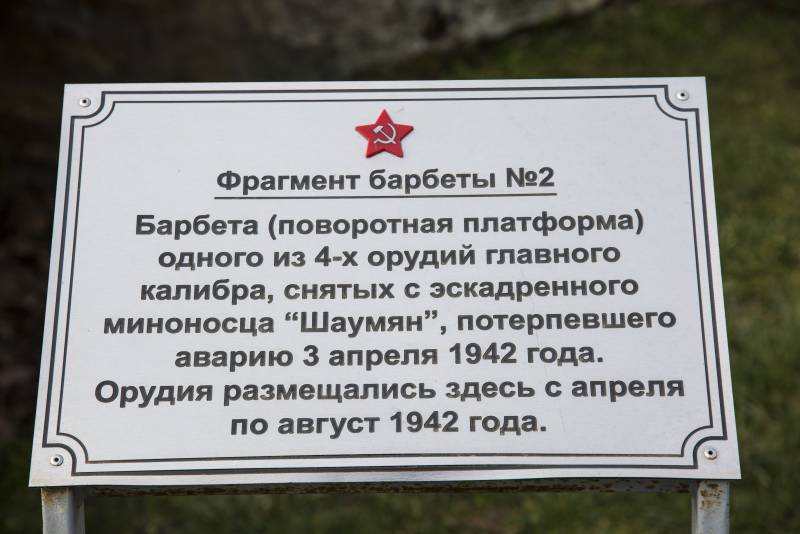 Errors on the signs are unpleasant. Yes, today you can easily say, “Who cares, barbet or barbet?”. Indeed, what kind?

Illiteracy is humiliating. For both sides, and the one that wrote this, and the one about which they wrote. Like "Tigers" in films about the battle of Moscow in 1941 or La-5, which, judging by the films, generally fought from the first to the last day.

And what about the weapon?

With the gun, too, everything is sad. 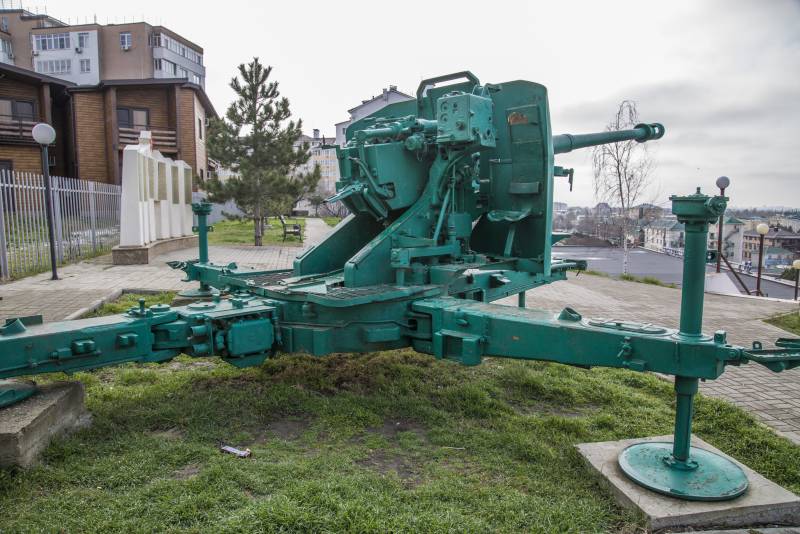 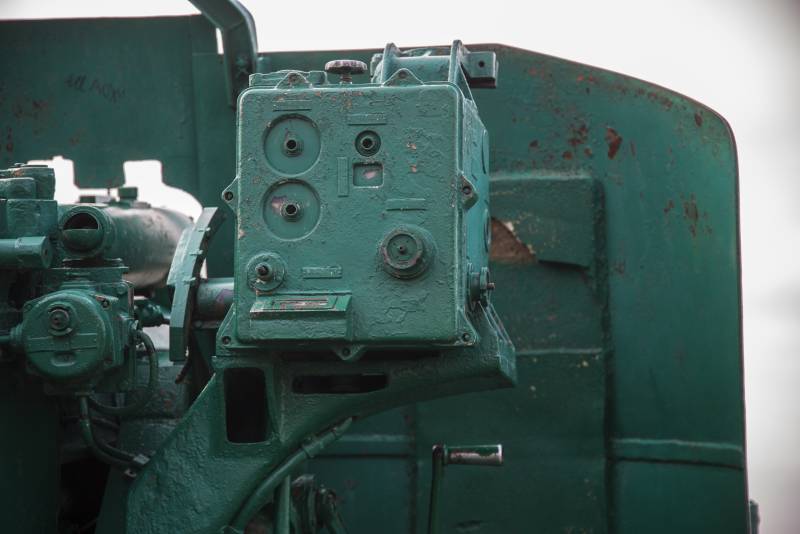 It immediately becomes clear (probably not to everyone) that this weapon has nothing to do with the events of 1942. But it still stands here.

In fact, this gun has its own history. They say that there used to be a sign telling about what kind of gun it is and why it is here.

The gun served 45 years and during its time in the combat composition of the Black Sea Fleet performed 216 artillery fires, fired 2400 shells, and repeatedly won the Commander-in-Chief of the Navy for artillery fire. 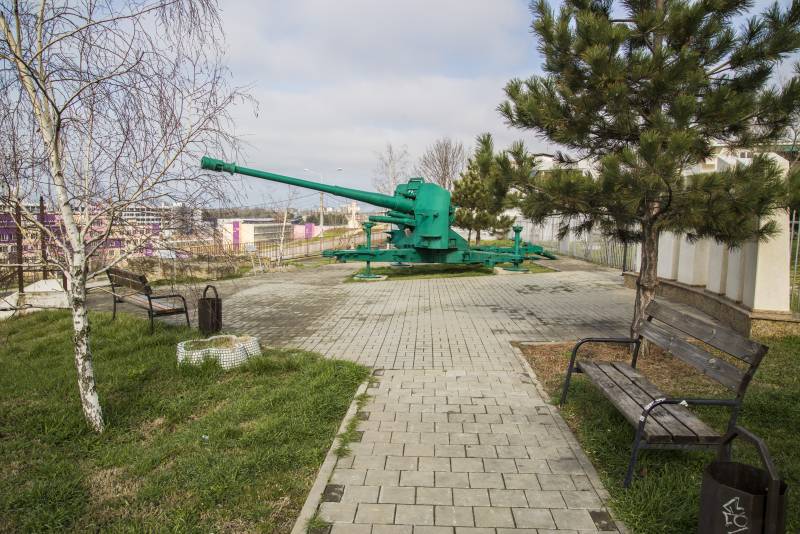 Here's a story. With ambivalent feelings and questions.

1. Why was a weapon installed at the site of the battery that had nothing to do with that war?

2. Why did they remove the sign telling about what kind of weapon it is? Apparently, at today's level of historical "enlightenment", just a gun with a barrel and painted green is enough?
By the way, the color, to put it mildly, is not the same at all.

3. Why does no one have any questions about the illiterate inscriptions on the tablets? Okay, the barrel of the antiamphibious gun facing the sea is normal. But the guns of the 646 battery looked in the completely opposite direction.

And the most important question: do we need such a story at all? Blinded "on the knee", stretched in the style of "owl on the globe"?

Of course, it's great that the place where the 646 battery fought for two days remained untouched, it is being looked after. But the approach itself is outraged. Of course, not the level of the Nazis on the posters for Victory Day or February 23, but still.

It is clear that there are few specialists, and mostly people who come to the southern city on vacation are not interested in such cruel details. But can we even afford such things?