The West should have sided with Hitler 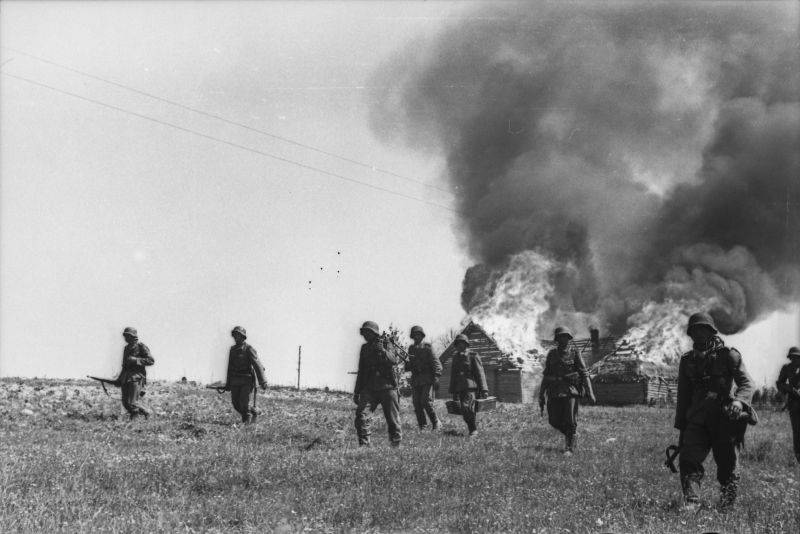 A German infantry unit from Army Group North walks past a burning house in a village near Pskov. Summer 1941

The West had to take the side of Hitler's Reich. A scandalous book by the American revisionist historian Sean McMeekin "Stalin's War" is being published in the USA. The author takes a new step in stories falsifications of the Second World War in the West: he directly reproaches the countries of the West for their wrong choice. Churchill and Roosevelt needed not to fight Hitler, but to unite with him and fight Stalin.

Russophobia on the march

This is not the first such work by McMeekin. In 2011, his book "Russian origins of the First World War" was published. In it, the author argues that Russia is allegedly more than other powers guilty of unleashing a world war. The war was fueled by Russia's enormous imperialist ambitions. In particular, Russia sought to seize Constantinople, the Black Sea straits zone and Galicia. The Russians used the situation in Serbia to be the first to begin mobilizing the army and thereby provoked Austria-Hungary and Germany to start a war. Also, the Russians allegedly provoked an uprising in Western Armenia, supplied the Armenians weapon long before the Ottoman Empire entered the war. This is the origin of the Armenian catastrophe.

The traditional method of Western propaganda: when white turns into black and vice versa. For example, in the West, the greatest and most effective Russian rulers, Ivan the Terrible and Stalin, have been turned into tyrants and villains. At the same time, propaganda has worked so well that even a part of Russian society believes in it.

Basically McMeekin didn’t come up with anything new. After the collapse of the USSR, history was already rewritten in the West. Russia is no longer considered the liberator of Europe. Moreover, in the Baltics, Ukraine, Georgia, Poland, the Czech Republic and many other countries, Russians are considered “occupiers” and “rapists”. Stalin was put on a par with Hitler, and communism with Nazism. The theory of the equal responsibility of Germany and the USSR in unleashing a world war has spread. Soviet soldiers-liberators were equated with the German occupiers and SS men. Moreover, in the wake of the “democratization” and liberalization of Russia in the 1990s, similar sentiments prevailed among Russian liberals and Westernizers.

Year after year, the postulates of the "criminal conspiracy" of Stalin and Hitler - the Molotov-Ribbentrop Pact, which allegedly began the Second World War, were approved. About the "Soviet occupation" of the Baltic States, Bessarabia and Western Belarus, and Ukraine. About Stalin's "criminal war" against Finland. How Hitler and Stalin "jointly" destroyed the Polish state, and much more. For each position, many articles, "scientific" papers and documentaries were published. They were approved in the "world" public opinion. Now this is a "truth" that is denied only in Russia and partly in Belarus. Although there are Westernizers or nationalists in Belarus who agree with this anti-Soviet and anti-Russian myth.

The fact that it was London and Washington that at one time nurtured and fostered Hitler, preparing him for a campaign to the East, is not told to the western man in the street. How Germany was helped to restore a powerful industry, the military-industrial complex, to create the Wehrmacht. What could not have been done without powerful financial injections, colossal economic, technical and resource assistance. Germany was allowed to break the Versailles agreements that contained it, to create full-fledged armed forces. That Hitler was given almost all of Europe. Austria and Czechoslovakia. England and France allowed the Reich to crush Poland - a "strange war". Britain slept through the occupation of Northern Europe. Then the masters of the West merged France.

Hitler and the Third Reich seemed to the West as an ideal anti-Soviet weapon. Until the very end of the war, the USA and England tried to avoid landing in Europe in order to strike the Reich. After all, the war between the Germans and the Russians was planned and went like clockwork. Millions of Russians were killed, German armies reached Leningrad, Moscow and the Volga. In the Far East, the Japanese Empire was to strike at Russia at any moment. The fiercest battles bled Russia and Germany. As a result, the Anglo-Saxons had to finish off the weakened winner, establish their own world order. The United States and England joined the ranks of irreconcilable fighters against Hitlerism only at the last stage of the war, when it became clear that the Russians had turned out again and became even stronger.

It is this truth about the war that Western falsifiers are trying to hide.

They take revenge on the pages of history textbooks, humiliate Russia and the Russians. They tarnish our heroic past. They are trying to make us Ivan, not remembering kinship, to hammer into Russians the idea of ​​their historical and civilizational "inferiority", of the need to be obedient to the will of the "developed, civilized and free world." Turn us into slaves of the Western order.

Therefore, the next step is now taken.

Russians are an absolute evil. Stalin is much worse than Hitler. Like, the Fuhrer and his henchmen were not so bad guys. They tried to protect Western Europe from the "Russian barbarians". In fact, this is a continuation of the theory of the revisionist writer V. Suvorov (Rezun), who suggested that Stalin was preparing a preventive war against Germany (The myth of Stalin's "preemptive war") and Hitler only got ahead of him, and thereby saved Europe from complete occupation by the Red Army and from its Sovietization.

The historical, informational basis for the assertion that Russia is an aggressor country is presented. At the same time, the Russians are aggressive at any period of their history: the Russian kingdom, the Russian Empire, the USSR and the Russian Federation. The Russians attacked Turkey, Sweden and Poland, started two world wars, the war in Afghanistan, invaded Ukraine and Syria, etc. Conclusions from the adoption of this theory can be made broad: from the fact that today's Russia (without repentance) cannot be a full member of the UN and the world community to the need to revise the borders of the Russian Federation. For example, the Russians should abandon Vyborg, Kaliningrad, the Kuriles, Crimea, the North Caucasus, etc. Pay compensation to the peoples affected by the "Soviet occupation". In particular, in the Baltics, in Poland, similar proposals have been put forward more than once.

Interestingly, in Germany itself, which was previously one of the strongholds that opposed revisionism, the process of rehabilitation of Nazism is also underway. For example, the German state channel ZDF launched a campaign under the hashtag #MeinNaziHintergrund (“My Nazi past”), urging young Germans not to hesitate to talk about their grandfathers and grandmothers who served in the NSDAP. The German generations who were ashamed of their past are gradually leaving. And sooner or later, quantity will turn into quality. Not surprisingly, Nazis are increasingly being found among the elite German troops.

The First and Second World Wars were caused by the crisis of capitalism, the Western world, which is based on the constant expansion, development and plundering of someone else's energy, resources and space. When there are no new zones of “free hunting, for parasitism and robbery, there is a severe crisis. It is solved by organizing a big war. It will make it possible to destroy competitors, including those within the Western world, and to rob their wealth. Also, destroy the previous political system, states, infrastructure, in order to create a new order in place of the destroyed one.

Before World War I, the West was at such a dead end. Then the masters of England, France and the United States pitted the Russians and the Germans against each other (World War I - the treacherous war of Great Britain and the USA against Russia and Germany). As a result, the Germanic, Russian, Slavic (Balkans) and Islamic (Ottoman Empire) worlds were destroyed and plundered. The West, due to the inflow of gold, capital, raw materials, the seizure of foreign markets, crawled out of the crisis. The Anglo-Saxons crushed their main rival within Western civilization - Germany. However, Russia by some miracle was saved (the red project of the Bolsheviks).

Therefore, when a new stage of the crisis of capitalism began (the Great Depression), a new world massacre was organized. The Anglo-Saxons prepared, financed and armed the Hitler project (Who brought Hitler to power; Hitler was only a tool to crush the USSR). The simple-minded Germans were once again set against the Russians. Even earlier, fascist Italy was created in Europe as a future hotbed of war. In the Far East, the United States and England have long fostered militaristic Japan, directed against China and Russia.

In general, the Second World War had to solve several important tasks:

1. Destroy Soviet civilization as the main threat to the West. As an alternative vision of the future of humanity. As a society of knowledge, service and creation, which in the future completely buried the slave-owning model of the West. With the hands of Hitler, finally solve the “Russian question: destroy most of the Russian superethnos, enslave the rest, with the complete elimination of the spiritual, cultural, educational and scientific and technical potential of the Russians.

2. Defeat Germany, weakened after the war with the Russians: dismember and occupy. First, turn Europe into a battlefield, and after the war - into a completely dependent on the United States.

3. Defeat and subjugate Japan in the Asia-Pacific region.

4. Weaken the British Empire, ensure its transition to the position of a junior partner in the Anglo-Saxon tandem. Ensure the penetration of American capital into the British world.

Ctrl Enter
Noticed oshЫbku Highlight text and press. Ctrl + Enter
We are
About Stalin and KhrushchevWhat you didn't want to know about England
Military Reviewin Yandex News
Military Reviewin Google News
105 comments
Information
Dear reader, to leave comments on the publication, you must sign in.