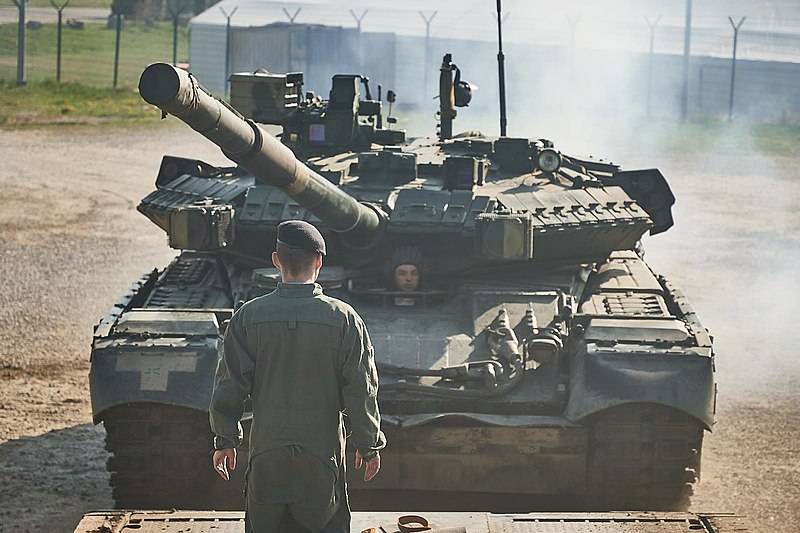 Since 2014, the destinies of Estonia, Latvia and Lithuania have caused serious concern among the military-political leadership of the NATO countries. An example of the return (or, as the Western media write, “conquest”) of Crimea by Russia, for some reason, is extrapolated to the Baltics. Moscow, in the opinion of the Western powers, will find it very difficult to resist a lightning war of conquest in the region. Everything has been created for this. Geographical location, when the countries are sandwiched between the Kaliningrad, Pskov, Leningrad regions and Belarus.

The military potential of the Baltic troika also leaves much to be desired - according to NATO calculations, Vilnius, Tallinn and Riga will surrender to Russian strikes in just 60 hours. And, finally, in the countries of the former Soviet Union there is still a large proportion of the Russian-speaking population. And this will be an additional bonus for the advancing units of the Russian army and for the post-war organization of the occupied territories. Achilles' real heel with NATO membership cards. 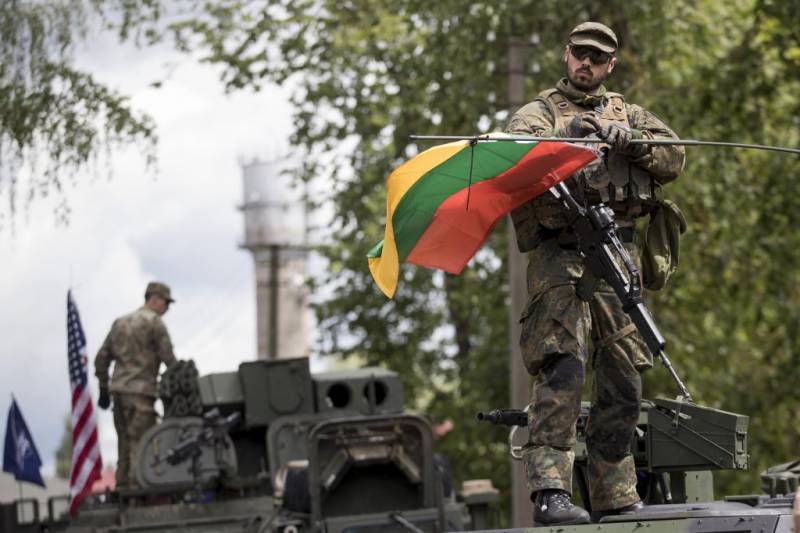 Source: facebook.com
NATO understands very well that a hypothetical conflict with Moscow should develop with lightning speed. This is primarily in the interests of Russia. The gradual escalation of the conflict is extremely disadvantageous for the Kremlin - the allied forces will have time to increase their numerical advantage. And the crisis will cost both sides a lot of blood with an unpredictable ending.

The operational transfer of military units to protect the sovereignty of the Baltic states in this regard seems to Brussels a priority task. However, logistical difficulties will hinder mobility, according to retired generals Ben Hodges and Heinrich Braus. The generals voiced their opinion in the German edition of the Frankfurter Allgemeine Zeitung and left NATO in the Baltic conflict with Russia not so many chances.

Several scenarios for the development of events are considered. First of all, this is a blow to the advancing Russian forces transferred from the Norwegian Oslo through Sweden. Further across the Baltic Sea landing to Estonia. Unless, of course, by this time there will be no Russian marines and anti-ship complexes on the coast.

But in this beautiful stories there is a weak Swedish link with a low capacity of railways, weak bridges and highways. In addition, there is a shortage of railway platforms in Sweden for the transport of heavy tracked vehicles. After all, the country is not part of NATO and is not particularly suited for the transit of foreign armies. Hodges and Braus propose to lay down at least three to four weeks for the transfer of units along this route! Where the Russian units will be in this case, I think, it is unnecessary to explain.

They are considering NATO strategists and alternative ways of advancing to the patronized eastern neighbors. To fend off the Russian threat in the Baltics by land, it will be necessary to pass through the sixty-kilometer Suwalki corridor. This scenario is being prepared either for a preemptive offensive or for a limited conflict with Russia without entering the territory of the Kaliningrad enclave.

Although the limited Russia-NATO conflict in itself is such an ephemeral thing that risks turning into a full-scale war that one should be skeptical about the plans of the ex-generals. Nevertheless, Hodges and Braus complain about the weak carrying capacity of the Suwalki Isthmus, through which one branch line and two roads stretches. With a quick transfer of troops, there will inevitably be a congestion that threatens a military catastrophe for the NATO contingent.

It is also necessary to modernize Polish transport routes. In particular, delays are possible at the Opole Glowne railway junction, which has not fundamentally expanded since Soviet times. 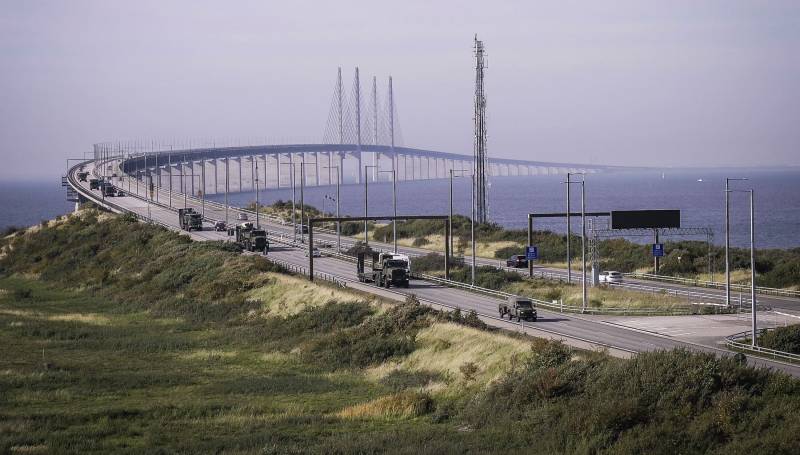 Source: nato.int
The most interesting thing is that in peacetime, when the situation in the Baltics will only escalate, NATO troops will have to stand still ... at customs. Despite the open borders of the European Union, they are still full of conventions. On average, it will take at least five days for NATO army units to solve all bureaucratic issues. At the same time, the military is ready to spend no more than three days on customs.

In addition to all of the above problems, there are weak bridges, narrow tunnels and old roads on the way from Western Europe to the Baltics. According to the most conservative estimates, Hodges and Braus propose to find at least one and a half billion euros by 2027 to modernize transport infrastructure. NATO has already prepared strategic directions on which they will conditionally "shift the asphalt" under the tracks of the Abrams and Leopards.

The Americans, meanwhile, calculated that most of Poland's bridges would not be able to withstand the 63-ton carcass of Abrams and the vehicles at its base at all. "Discovery" was made by analysts from the renowned agency RAND. This is not surprising - the bridges were built in the era of the Warsaw Pact, and the architects definitely knew the difference between the masses of enemy and Soviet armored vehicles. In the direction of the west, the relatively light 45-ton T-72 vehicles had to pass, but in the opposite direction the Abrams, Challengers and Leopards had to fail.

The Americans announced additional purchases last year in this regard. tank bridgelayers, but this will not fundamentally increase the operational mobility of armored vehicles.

From the outside it may seem that if Moscow had the will, the Baltic countries would have long ago connected the Russian enclave with the continental part of the country by a sovereign isthmus. And indeed it is. Beyond its rapidly aging transport infrastructure and logistical complexities, NATO has few forces in Europe.
The Americans keep only 70 thousand troops in the Old World, of which 35 thousand are in the ground forces - in the best years of the Cold War there were almost 400 thousand. It is noteworthy that the United States even had to dispatch peculiar hostages to Estonia, Lithuania and Latvia. Each of the countries is supposed to have one airborne company, which (in the event of a conflict with Russia) must quickly perish, thereby engaging Washington in a full-scale war.

Recall that the Baltic troika, even in NATO itself, is given 60 hours to confront Russia. Of course, pessimists think so. Optimists are ready to give Estonia, Lithuania and Latvia two or three weeks without external assistance. Which, as we found out, will not come up soon. Now on the agenda in Brussels is ensuring the operational mobility of troops according to the "30-30-30" formula, that is, in 30 days the army must deploy 30 combat-ready battalions, 30 squadrons and 30 naval vessels. While this is in theory, but with each new teachings, the thesis is getting closer to reality.

Since the collapse of the Warsaw military bloc, the territory of Eastern Europe has not fundamentally been modernized militarily. On the one hand, Russia did not pose such a threat, and on the other, it was simply a pity for the money. Fortunately, the Europeans already had a lot of worries in the east.

Now NATO has to adapt its standards to the transport infrastructure of the former socialist bloc country. It doesn't always work out.

Due to their geographical location and the transport network inherited from the USSR, the Baltic states have the hardest time.

Ctrl Enter
Noticed oshЫbku Highlight text and press. Ctrl + Enter
We are
Strangulation: the context, conduct and consequences of the American naval blockade of ChinaRepublic of the former USSR. Latvia: years without “occupiers”
Military Reviewin Yandex News
Military Reviewin Google News
73 comments
Information
Dear reader, to leave comments on the publication, you must sign in.