Limitations and prospects of "microwave guns" 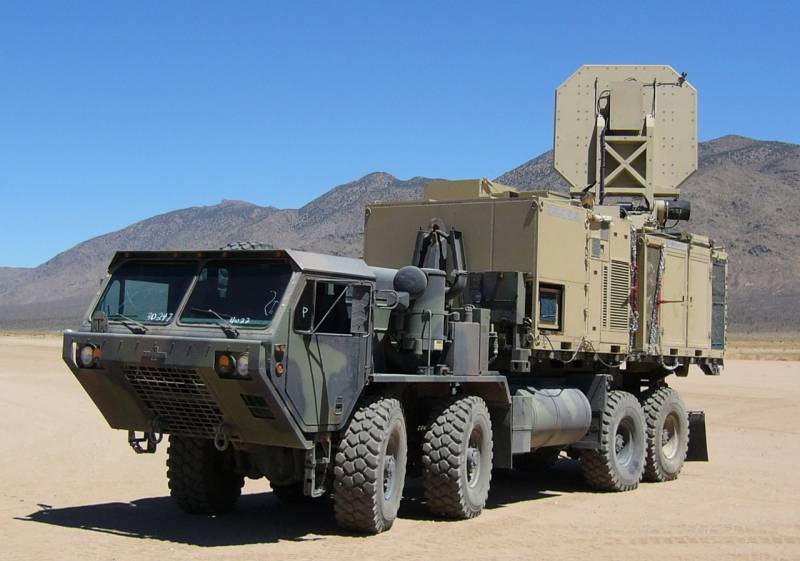 An early version of the ADS system on a truck chassis

One of the options for the so-called. weapons on new physical principles or directed energy weapons is a system that strikes a target due to microwave electromagnetic radiation. In recent decades, a number of similar complexes have been proposed in different countries, but only a few samples have reached the armament. Objective factors of various kinds interfere with obtaining more interesting results.

Microwave or microwave radiation refers to waves with a length of 1 m to 1 mm (frequency from 300 MHz to 300 GHz). Microwaves of different frequencies and intensities are used to solve a wide range of problems in industry, communications, radar and even in everyday life. In the context of weapons systems, it is proposed to use the ability of microwave radiation to induce currents in conductors and warm up dielectrics.

The "microwave cannon" can be used to destroy enemy electronic systems. Radiation of sufficient power can damage or destroy circuits and components of an electronic device. With the help of radiation of lower power and the required frequencies, it is possible to suppress radio channels in the corresponding ranges. 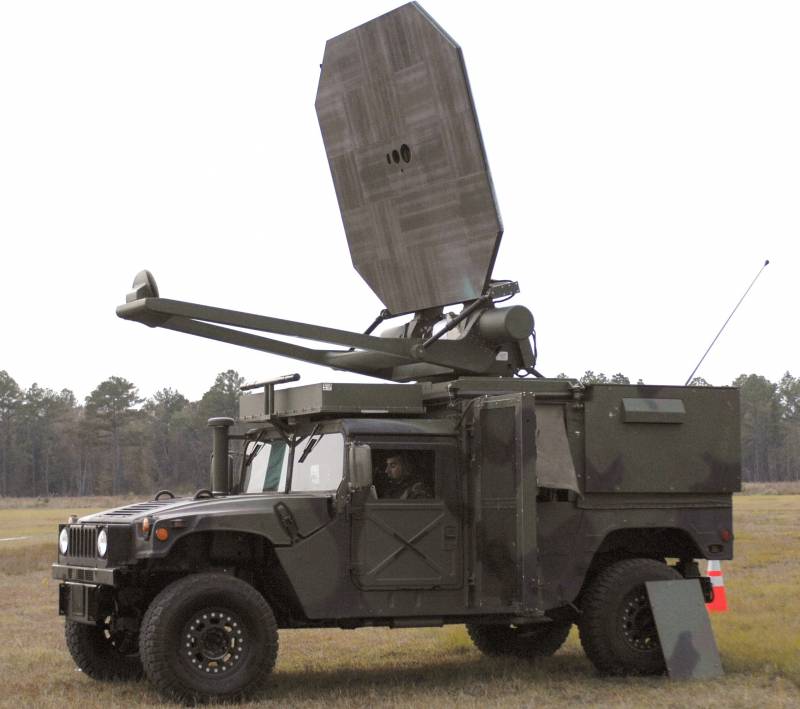 More compact ADS option
Microwave radiation is also proposed to be used against manpower. Radio waves can heat water in the tissues of the human body and cause pain and / or burns. This effect can be used for long-term incapacitation of the enemy or as a short-term measure of non-lethal impact.

Weapons based on microwave waves can be performed in different form factors and used on different media. Projects were proposed for air, land and sea-based systems. At the same time, only land samples, stationary and mobile, have been brought to the series and until operation.

At the beginning of the XNUMXs, the Pentagon announced the existence of a non-lethal ADS (Active Denial System) microwave cannon. This product was made in the form of a container or a set of devices suitable for mounting on a car chassis. A large antenna device is placed on the roof of the carrier for targeted destruction of targets.

The first version of ADS operated at 95 GHz and had a power of 100 kW. Waves 3,2 mm long penetrate 0,4 mm into human skin and cause heating of the epidermis without affecting deeper layers and tissues. Depending on the range and current power of the emitter, within 3-5 seconds the skin warms up to 40 ... 45 ° C. This causes pain and forces the enemy to seek cover. With the cessation of exposure to waves, a person's well-being is normalized. Burns and other injuries during short-term exposure are unlikely - the target person prefers to escape from the radiation before it excessively overheats the tissue. 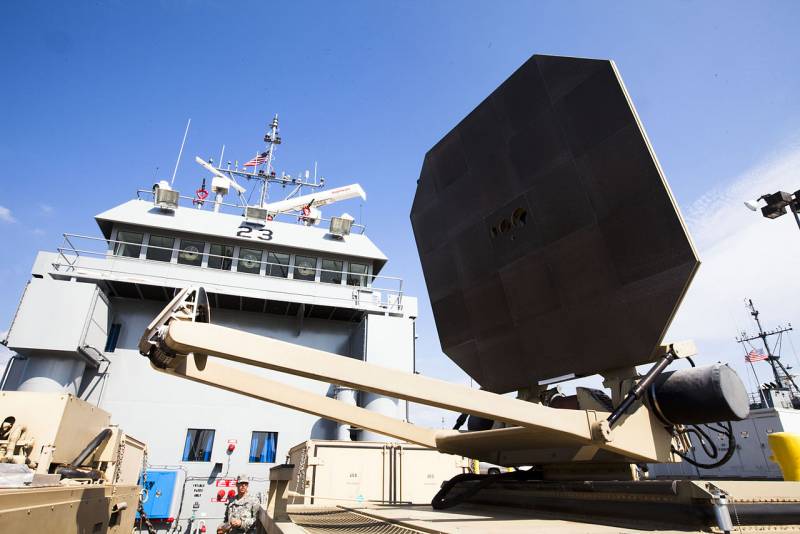 ADS towed on board
On the basis of the full-size ADS complex, new samples were created. Thus, the Silent Guardian product is less powerful and is installed on the HMMWV chassis. It is also known about the development of small-sized stationary complexes for use at various facilities.

Field tests of the first version of the ADS were carried out in the 2010s. In XNUMX, it was reported about the deployment of such a complex at one of the bases of the American army in Afghanistan. Details were not disclosed, and soon it became known about the removal of ADS from duty. Despite this, it has been argued that ADS and similar systems are capable of providing effective and non-lethal protection of objects from attacks.

The Russian army already has a microwave gun. This product is used as part of the target equipment of the 15M107 "Foliage" remote demining machine. This vehicle is equipped with a multi-zone search module for detecting explosive devices, and also carries a microwave generator with an emitter to destroy detected objects from a safe distance.

The "microwave cannon" on board the "Foliage" vehicle is designed to disable electrical and electronic components of explosive devices. The antenna device ensures the destruction of targets in a sector with a width of 90 ° at a distance of up to 50 m. Under the influence of an electromagnetic pulse, the elements of the mine "burn out", with or without charge detonation. 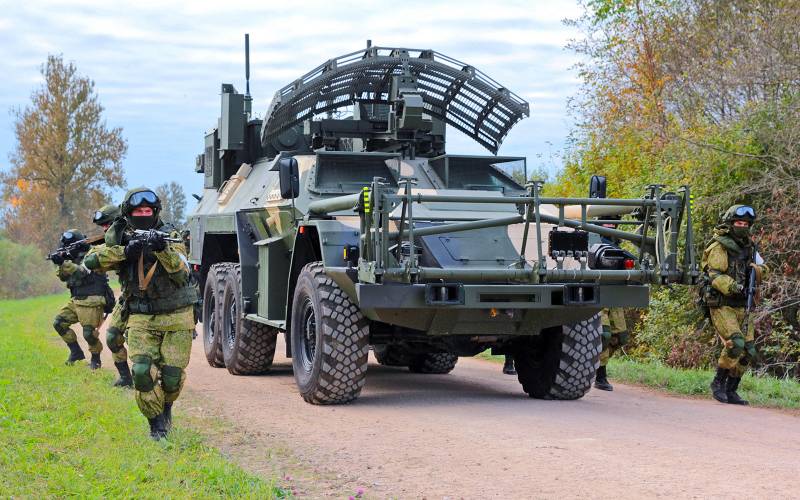 Machine 15M107 "Foliage" in the stowed position
The "Foliage" demining vehicle has been adopted by the Russian Strategic Missile Forces, is mass-produced and supplied to the troops. This technique is intended to escort mobile ground missile systems on alert. The crews of the "Foliage", using the standard equipment of the vehicle, must identify and neutralize dangerous objects on patrol routes.

The Strategic Missile Forces regularly conduct a variety of exercises, incl. using machines 15M107. Another message about the Foliage exercise appeared just a few days ago. The demining machine identified and non-contact defused 20 training explosive devices, incl. outside the standard range of 50 m.

Directed energy weapons are attracting the attention of the military, scientists and engineers, but microwave guns have not yet been widely used. Only individual samples have been brought to operation, and a lot of other projects cannot even get out of the testing stage. Other ideas remain at the stage of proposals without real prospects. The fact is that experienced microwave guns have shown their capabilities and general potential for a long time - and with them disadvantages and limitations. 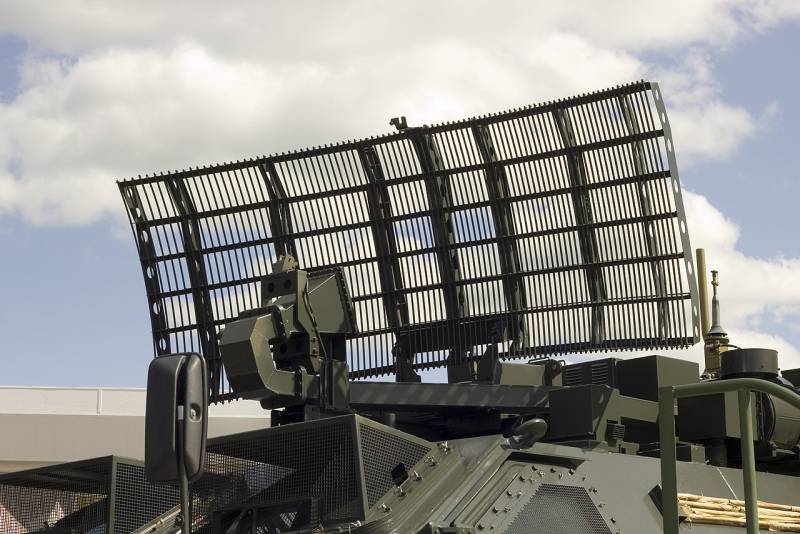 Microwave cannon on the roof of "Foliage"
The non-lethal ADS complex at one time was criticized in two directions at once: due to the alleged lack of efficiency and in connection with possible excessive performance. Thus, maximum efficiency is ensured only when radiation hits parts of the body without significant protection. Thick clothing, not to mention protective equipment, dramatically reduces the effect of microwave radiation. How ADS should respond to such “threats” is unknown; details of the studies were not reported.

During the tests, the volunteers were free of any metal or other objects that could heat up under the influence of microwaves. What could be the effect of ADS exposure on metal items of clothing, jewelry, tattoos, etc. - unknown. According to various estimates, a negative impact is not excluded, incl. with delayed effect.

According to well-known reports, the Russian "Foliage" mine-clearing vehicle copes with the assigned tasks and provides both search and disposal of mines. There is the possibility of remote demining, which sharply reduces the risks for the vehicle and its crew. Such capabilities have been repeatedly tested on tests and during exercises.

However, the microwave gun as a means of demining has a significant drawback. Such weapons are only capable of striking explosive devices built using electrical and electronic components. Simpler products, devoid of such "weak points", will have to be neutralized manually, by the forces of sappers who are part of the vehicle's crew. 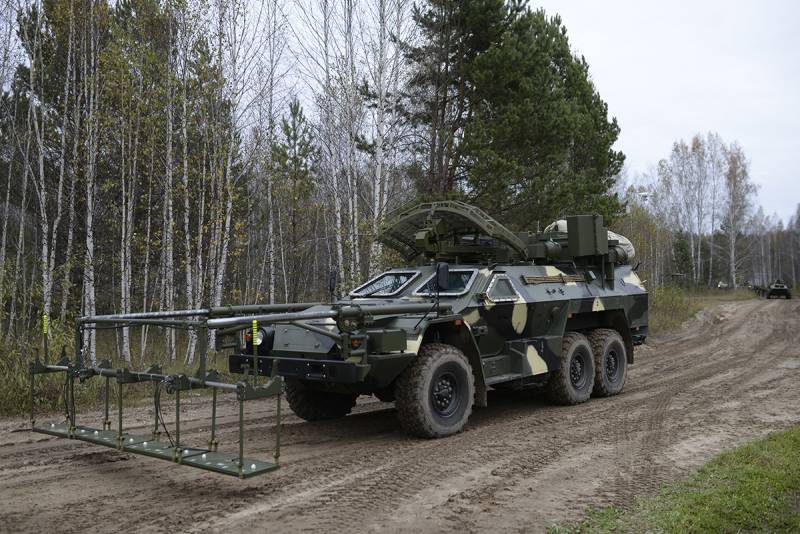 The demining machine searches for explosive devices. Microwave cannon folded
In addition, the "Foliage" microwave emitter solves only one specific problem and cannot be used for other purposes. Probably, by proper configuration, it can be turned into a non-lethal semblance of ADS, but nothing is known about this.

According to known data, the non-lethal ADS weapon system developed by the United States was used to a limited extent by the army and other structures. The Russian product "Foliage" on the same principles found application in the Strategic Missile Forces and provides safe patrolling of the PGRK. New weapons based on microwaves have been announced, but have not yet been brought to full operation. Perhaps this situation will change in the foreseeable future.

In the meantime, preliminary conclusions can be drawn. In theory, microwave weapons can impact and destroy enemy personnel and materiel. The expected effects make it possible to solve a wide range of tasks requiring permanent or temporary incapacitation of the enemy. However, the creation of workable systems of this kind and the search for areas of their application, as practice shows, are associated with certain problems and objective limitations.

Specific disadvantages limit the real scope of application of microwave guns. The maximum possible results have so far been obtained only when developing specialized systems for rather narrow niches. However, leading countries remain interested in microwave directional weapons, realize their advantages and disadvantages - and continue research and design work. It is very likely that new samples that hit the target with microwaves will appear in the very near future and will compare favorably with existing products.