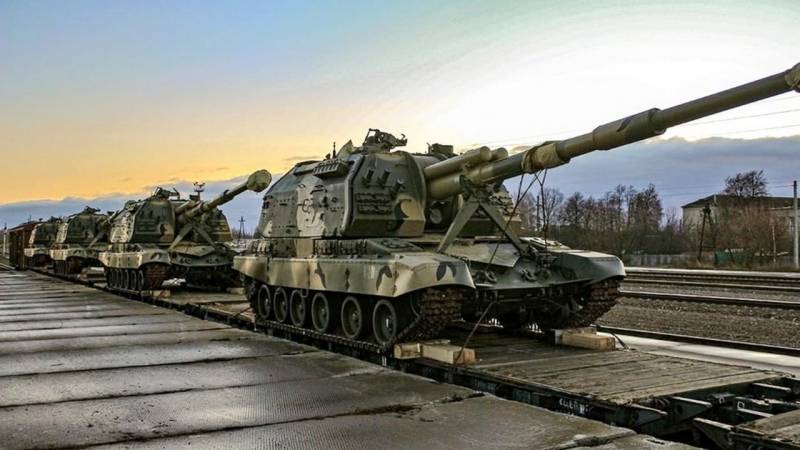 The redeployment to the western border of the Rostov region of the S-300PM1 anti-aircraft missile battalion of the Russian Aerospace Forces, numerous batteries of the Akatsiya and Msta-S self-propelled guns of the Russian Army, as well as motorized rifle and engineering units of the Russian Ground Forces finally strengthened us in the opinion that in the course of “stopping” the upcoming general offensive throw of Ukrainian military formations in the key operational areas of the Donbass theater of military operations, the 1st and 2nd Army Corps of the NM LDPR can rely not only on information support provided by aircraft operators strategic radar and optical-electronic reconnaissance of Tu-214R and RER Il-20M aircraft, but also for full-fledged artillery support with the final suppression of key fortified areas, artillery firing positions and mechanized units of the Armed Forces of Ukraine, as well as the establishment of a no-fly zone over the theater of operations.

You cannot do without the "north wind". How will carte blanche turn out for Kiev in the implementation of the escalation scenario in the Donbass theater of operations and provocations on the northern border of the Republic of Crimea?

Being a completely adequate asymmetric response to the deployment of Tochka-U battalions near the northern borders of the Republic of Crimea, the recent implementation of exercises by rocket artillery battalions of the Smerch MLRS of the Ukrainian Armed Forces with simulated (“digital”) massed missile and artillery strikes against the strategically important infrastructure of the Russian Armed Forces in Crimea, as well as Kiev's planned mass genocide of the Russian-speaking population of Donbass in the event of successful offensive actions by Ukrainian formations, the above countermeasure of the General Staff of the Russian Armed Forces will provide the 1st Army Corps of the DPR NM with a number of operational and tactical advantages.

First of all, this is the possibility of blocking the advancing units of the 36th Separate Marine Brigade of the Armed Forces of Ukraine and the Azov Regiment in Telmanovsk and Novoazovsk, which will exclude the possibility of the latter establishing partial control of Telmanovo's dense urban development, replete with a huge list of tactically advantageous firing positions for the use of anti-tank systems FGM-148 "Javelin" on armored vehicles of the 9th Mariupol-Khingan separate motorized rifle regiment and other units.

The batteries of the Msta-S self-propelled guns or the Tornado-S multiple rocket launchers can perfectly cope with this task, the ammunition of which will have 152-mm Krasnopol-D guided artillery shells and 300-mm guided missiles of the 9M544 / 549 family with a range 43 and 120 km respectively.

Consequently, for the lightning-fast deprivation of the combat stability of the 36th Marine Brigade of the Armed Forces operating in the Telmanov direction, the crews of the Msta-S self-propelled guns and the Tornado-S MLRS do not even need to cross the border with the Donetsk People's Republic, because all the western approaches to Telmanovo are within reach the above types of promising artillery shells in the event of the deployment of artillery systems in the Rostov region.

Several massive and high-precision missile and artillery strikes of MFA in the “fire raid” mode along the “chain” of fortified areas in the vicinity of Mariupol and Volnovakha will allow, in a fairly short time, to hack the first line of defense of the Armed Forces of Ukraine and provide the 1st AK NM DNR with the opportunity to start developing a counteroffensive in the Mariupol operational direction with the formation of an appropriate tactical cauldron.

As for the redeployment and probable deployment of S-300PM1 anti-aircraft missile divisions in the western regions of the Rostov region, they will not only "cut off oxygen" to the Ukrainian front-line fighters MiG-29MU1 and Su27S / P1M, front-line bombers Su-24M and attack aircraft Su-25UM1 / UBM1K, but will also completely deprive the publicized Turkish shock-reconnaissance drones "Bayraktar TB2", on which the General Staff of the Armed Forces of Ukraine has made very high stakes, of the possibility of operating.

It is well known that the airframe of this product has an effective reflective surface of the order of 0,07–0,1 sq. m.

The radar for illumination and guidance 30N6E (included in the radar architecture of the S-300PM1 air defense missile system) is capable of capturing such targets for "precise auto-tracking" at a distance of 90-105 km.

As a result, the S-300PM1 division deployed west of Taganrog will be able to intercept the Bayraktars of the Ukrainian Armed Forces in the Berdyansk - Rozovka - Donetsk - Gorlovka semicircle (on the outskirts of the LPR).

If the operators of "low-speed" and low-maneuverable Turkish drones bet on the phenomenon of the radio horizon and try to hide the Bayraktars from the 30N6E illumination radar behind the "screen" of the radio horizon by transferring the UAV to a low-altitude mode of following the terrain (at a distance of 90-105 km, the height of the radio horizon is on the 40V6MD universal tower of the 30N6E radar is about 375-400 m), then they will automatically fall into the high-altitude lines of interception of the Strela-10M3 self-propelled air defense systems, which are in service with the 1st AK NM DNR.

The 9M333 anti-aircraft guided missiles included in the data of the air defense system are equipped with unique multispectral optoelectronic seeker with infrared, photocontrast and jamming sensors (capturing the source of optoelectronic interference).

The presence of a photocontrast sensor (which directly captures the silhouette of the target in the visible wavelength range) will allow the 9M333 missile defense system to intercept Bayraktars without difficulty, even despite the good shielding of the Rotax 912 horizontally opposed piston engines, which provides a multiple reduction in the infrared signature of these shock reconnaissance drones.

In addition to creating a no-fly zone over the Donbass theater of operations, the S-300PM1 anti-aircraft missile divisions of the Russian Aerospace Forces will also be able to cover the Donetsk-Makeevka agglomeration and a number of large settlements of the Donbass republics from attacks by operational-tactical BR 9M79-1 "Tochka-U" and 300-mm guided missiles. Alder-M rockets, self-propelled launchers of which, with a high degree of probability, can be deployed near Kramatorsk.

But in order to form a reliable anti-missile "barrier" over Donetsk, the S-300PM1 air defense missile launcher must be redeployed to the Shakhtersk area, since the maximum range of interception of ballistic targets for this version of the Trehsotka is 40 km. Thus, it should be stated that the MFA and S-300PM1 units of the Russian Aerospace Forces deployed near the Donbass theater have mixed all the cards in Washington and Kiev.

Ctrl Enter
Noticed oshЫbku Highlight text and press. Ctrl + Enter
We are
Situational analysis of the death of the MH17 flight (Malaysian Boeing 777), made on the basis of engineering analysis from 15.08.2014Operational situation in the Donbass theater against the background of Avakov’s brilliantly insane strategy. What steps to wait?
Military Reviewin Yandex News
Military Reviewin Google News
202 comments
Ad