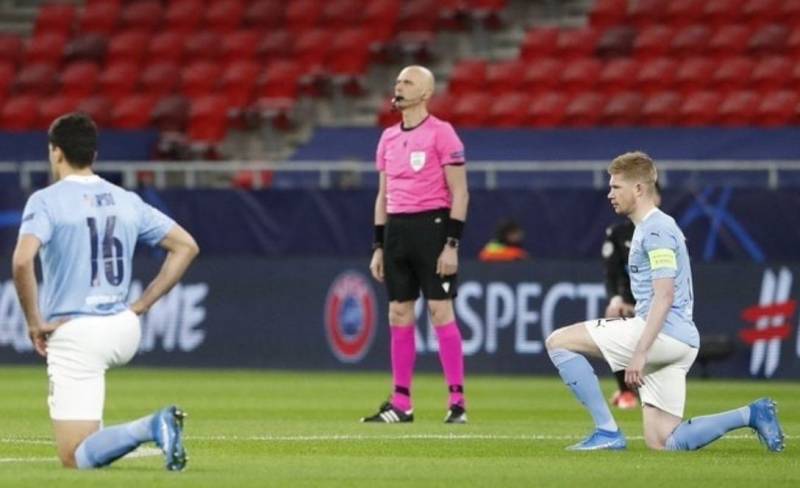 Is Russia to blame again?

In London on March 26, football referee Kirill Levnikov, before the meeting between England and San Marino, unexpectedly repented for the sins of his ancestors before African Americans and knelt down. Of course, the Western European public appreciated such an attack by a Russian citizen and unanimously approved the public action. The most depressing thing about this is that Levnikov never explained why white natives of Russia can allow themselves to express solidarity with the Black Lives Matter (BLM) movement in this way. Public statements about unfair treatment of African Americans, corresponding reposts on social networks, and even protests at American embassies can be considered conditionally permissible. After all, why can't Russians stand in solidarity with the eternally oppressed blacks in the United States? Racism is in America's blood and no matter how hard BLM activists try, it will take another couple of generations to get rid of it. If at all possible, of course. 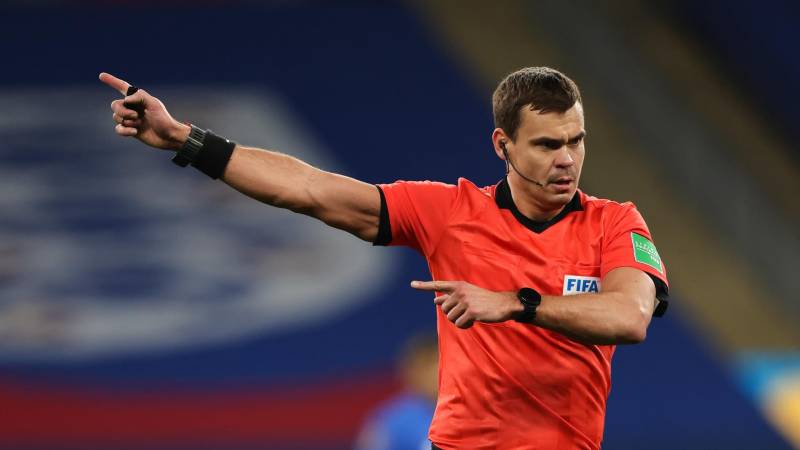 ... and the referee Levnikov stood up. Source: eurosport.com
The bowed knee of arbiter Levnikov was perceived by the overwhelming majority of Russians not as a symbol of solidarity, but as a posture of submission. As rightly commented on social networks, a man kneels before God, as a sign of respect to his parents and when he asks for the hand of his future wife. Everything else is interpreted solely as a symbol of obedience to the will of the one before whom the knee is bowed. And this is the opinion not only of Russians, but also of the "enlightened" West.

"I kneel before two people: the queen and my consort, when I asked for her hand in marriage."

And the British, as you know, have a very big colonial background of guilt towards blacks and not only towards them. Obviously, Levnikov also found in the Russian stories some pages for which we need to kneel in front of blacks.

There are two intolerable things in this situation. The first is a feeling of indignation, bordering on shame, from the need to contemplate a Russian citizen on his knee. And this is in the center of London, "friendly" to us. And secondly, a part of the Russian public can accept such a gesture of a football referee as a real admission of Russia's guilt towards blacks. A bad example is known to be contagious. Considering the level of development of modern "boomers" of Russian history, this cannot be ruled out. Peter the Great had his own dark-skinned Arap. More enlightened people will remember the African roots of Alexander Sergeevich himself. Maybe, after all, there are a couple of moments of inaccurate treatment of blacks somewhere in Russian history? And we have something to ask for forgiveness?

The epidemic is coming

Probably, comparing Black Lives Matter with an epidemic will not seem entirely correct, but the logic of the development of events suggests just such an analogy. A few weeks ago, on March 16, Russian referee Sergei Karasev with assistants Igor Demeshko and Maxim Gavrilin refused to kneel before the start of the match. The game was going to be very serious - Manchester City and Borussia Mönchengladbach were sorting out the relationship in the Champions League. Everyone on the field, of course, knelt down in unison to the approval of the stands. But the referees from Russia were not afraid to stay on their feet. How not afraid of the Formula - 1 racer, the Russian Daniil Kvyat. Last year he defiantly did not kneel down several times when almost the entire piloton showed "solidarity." The genius of the knee was Lewis Hamilton, the only black Formula One driver. He, in particular, owns the words:

"Silence on racism is complicity."

Nevertheless, repentance for the colonial past has not passed our country either. The first Russian citizen knelt down in public. Will BLM virus spread to all of Russia?

Source: russiamatters.org
Only now adherents of such actions forget that kneeling is more or less adequately perceived only in the United States. For several decades overseas, kneeling has symbolized the peaceful struggle for civil rights, the strength and unity of the nation in one prayer. This has been the case since the days of Martin Luther King.

Despite the all-encompassing globalization, gestures and symbols are still perceived differently in the world. For example, the well-known gesture "Everything is OK!" in Europe, the USA and Russia are perceived as "everything is great!" But in Brazil, you have to be careful with such messages - here the locals designate a similar fifth point. And the situation with BLM kneeling in different countries is perceived completely differently. Especially those who have not tainted themselves with racism. Conversely, states that have recently launched a real genocide against other peoples have not adopted the methods of fashionable repentance. For the Germans, for example, it would be very nice to come up with their own symbol of repentance-solidarity in front of the millions of those killed just because they are Russians, Jews, Gypsies ... And start all public events with appropriate ceremonies.

If you are white, then you are a racist

The BLM trend has so far only touched the Russians, but in the United States, it seems, they will never find a way out of the anti-racist impasse. In the fight for the importance of black lives, activists are crossing all boundaries. And here there is little real attention to the problems of American racism. Fame and commercial gain come to the fore. In the modern world, these are identical values ​​for a long time.

And the interracial sequel "Peter Pan and Alice in Wonderland", in which most of the actors are black, is considered quite progressive. On the network, many platforms have banned criticizing the film for the absurdity of the casting, and YouTube channels under the trailers of the new movie turned off dislikes. By the way, on the issue of free will in the West. Naturally, such a kind of advertising campaign cannot but have a positive effect on the box office of the film. Although it may not affect, we will not find out about it, since the very fact of the failure of a film with black actors will be considered a manifestation of racism.

In pursuit of the public's favor, you can put your own creations under the knife. So the theater in Minneapolis in late March canceled the play "Cinderella". How can a production exist in modern America if, as theater director Michael Brindisi put it, the cast is "98% white"? Now the theatergoers have announced a new casting, the entrance to which has been ordered off white. A manifestation of new racial discrimination, now against people with fair skin. 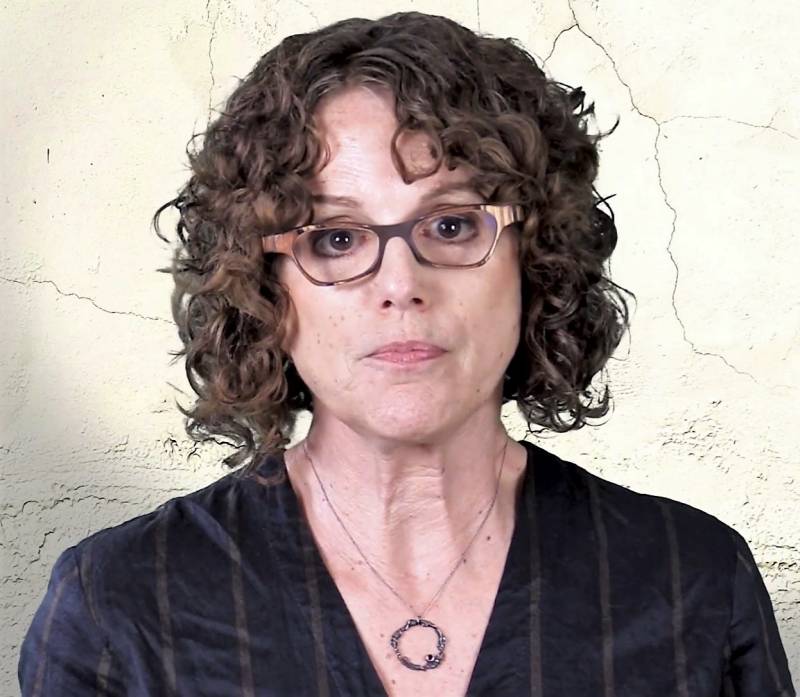 Coca-Cola, for example, at one of its internal corporate presentations, quite seriously recommends employees to try to be less white. If you are white from birth, then your whole life will have to prove that you are not racist. And to do it all the more difficult. Writer and researcher of the phenomenon of the white man Robin DiAngelo in the lecture "Deconstructing White Skin" speaks almost of the innate racism of light-skinned people. Say, at a very young age, white people subconsciously absorb their exclusivity and racist attitudes. It is now impossible for a non-African American and non-native American to prove that he is not a racist.

Expressions like “I don’t divide people by skin color” and “for me all races are the same” only confirm, according to DiAngelo, the racist essence of the individual. Such expressions can only be allowed by representatives of the dominant races. Probably only silently kneeling down can a white man be proven that he is not a racist. As Kirill Levnikov did.

The BLM movement is taking on an ideology. And she has her theorists. The centuries-old history knows many examples of the transformation of generally harmless and, at first glance, fair ideas into real monsters. For example, eugenics, fashionable at the turn of the XNUMXth and XNUMXth centuries, literally transformed into the foundation of German National Socialism in just a few years.

Are there any guarantees that BLM's viral activity won't translate into something more? And will skin color become a true sign of the dominant race?