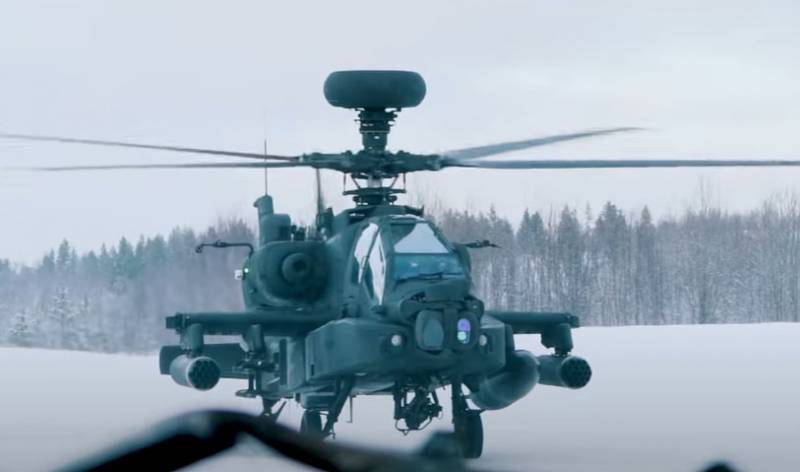 British Defense Secretary Ben Wallace spoke about the prospects of the British Army aviation in connection with the reform of the troops. London is trying to carry out a major reform in the Royal Armed Forces, the main program of which is called "Soldiers of the Future". According to the minister, the 1st tactical aviation brigade will be combined with the 16th airborne assault brigade "to form a global rapid reaction force."

This transformation will enable us to respond quickly to crises around the world.
It is pointed out that for "preparedness for new challenges" the crews of attack helicopters of the British army are being trained in "difficult Arctic conditions."

We are talking about the crews of Apache Attack helicopters, which, according to the minister, “will be trained in piloting in the Far North for ten days. In which region the pilots of the British Army Aviation undergo this kind of training, Wallace did not specify.

However, information appeared on social networks that British helicopters were involved in maneuvers in Norway. In particular, for their basing, the Bardufoss airfield is used, from which Hitler's planes took off during the Second World War, including for delivering strikes on the territory of the USSR. The airfield is located in the north of Norway. It is about 300 km from the Russian border.

The British Ministry of Defense notes that helicopter pilots perform piloting in conditions of limited visibility, at temperatures below 20 degrees Celsius. During the exercise, the skills of landing on ice and piloting in the dark are practiced. It also reported on the training of the crew for survival in the event of an emergency helicopter landing.
Ctrl Enter
Noticed oshЫbku Highlight text and press. Ctrl + Enter
We are
Reports from the militia of New Russia for 27-28 September 2014 of the yearList of CIA-funded Russian public organizations
Military Reviewin Yandex News
Military Reviewin Google News
24 comments
Information
Dear reader, to leave comments on the publication, you must sign in.