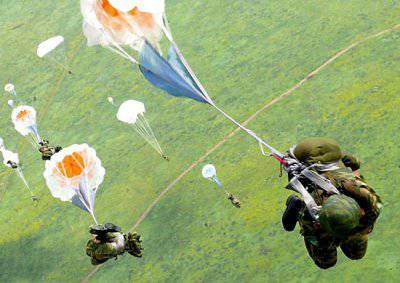 I was born in the ancient Russian city of Pskov and left it to go to university. But every year I went with my family at least once to my homeland. In those days, it was not at all costly, I could afford to travel by plane with a transfer in Moscow. After all, it turns out that when we were poor we were rich, and when we started living in a “democratic” society, traveling to another city on an airplane immediately turned into luxury.

So, in Pskov, I always helped my father repair his car, the beautiful 21 – Volga, to do something in the garage. There were always his neighbors in the garage, former colleagues, and they often told stories from army life. I want to recall one of these stories now. Georgy, a former instructor for landing an airborne division in Pskov, told her. Having seen a grateful listener in me, he told about an unusual case from his service. I apologize in advance if I call something wrong, I tell the story according to my own sensations and to the best of understanding.

One day, George flew to the landing. We flew on the old workhorse of the paratroopers on the An – 2 plane, which is still carrying soldiers to the altitude so that they can descend by parachute from there. In the plane there were two pilots in the cockpit, George and the detachment of paratroopers, ready for parachuting. George knew the junior lieutenant, who was supposed to be the last to jump. The plane gained altitude, a signal arrived from the cockpit - it's time to jump. All the paratroopers, according to the instructions, fastened the carbines of the exhaust parachute to the long cable that was stretched along the entire cabin of the aircraft. They all stood along the cable and moved to the side door, through which they jumped. The paratrooper did not need to pull the ring, the parachute opened itself, the exhaust cable remained on the plane, and the soldier with the opening parachute flew to the ground. The whole compartment safely left the plane and descended to the ground in a state of euphoria - I imagine the sensations of flying with a parachute. The last jumped junior lieutenant. Whether something did not work, it may have been an error when assembling the parachute, but the exhaust cable was firmly attached to the dome of the main parachute. When the lieutenant jumped into the open door, the dome immediately opened, filled with the oncoming air and remained hanging across the cabin of the aircraft. The parachute lines severely hit George, standing right next to the door, in the face, he fell, hit his head badly and felt that blood was running down his face.

At this point, the fun began. The plane flies, a paratrooper dangles on its lines, the parachute of which partially remained in the cockpit. George thought:
- You need to get up to call one pilot and try to drag the guy back.
Immediately another thought flashed:
- It will not work, it is too heavy, and the parachute behaves like an unbroken horse, trying to hit the lines with anyone who wants to come close.

But George’s body refused to obey. He felt that he needed to do something, he urgently needed to tell the pilots, consult with the ground and try to save the young guy, but could not even move his hand, could not utter a sound.
The cockpit door opened, the second pilot looked out, looked at George, looked at the trembling parachute and ... quietly closed the door. From the sound of the engines and the change in the flight angle, George realized that the plane had begun to land. George frantically tried to make a decision - there is a young guy down there unconscious who just crashes during the landing, you have to get up, save him, but the body did not listen.

Through the open door, he saw the approaching field of the airfield, thinking hopefully:
- Maybe they will land on the grass, then the guy has a chance to escape.

But the plane entered the concrete strip and landed. Everything - the inevitable death of a young guy. George remained motionless, the pilots did not leave the cabin either. Suddenly a smiling lieutenant's face appeared in the doorway. The rags of a reserve parachute dangled on his chest, but he seemed to be pleased:
“How softly they landed me, great pilots, rescued me,” the lieutenant said.
At this moment, George released:
- Yes, how could you, you good fellow, that alive ...

During the landing at the command post was a high rank of inspectors. Everyone saw that a man was hanging under the plane. But no one said a word, everyone silently watched the natural course of events.

Then they started to figure out what happened. We decided to award the crew and George for saving a man. But it turned out that they did not save anyone. In addition, all those present at the flight control center behaved strangely. No one took any action. We decided to hush up the whole story and not to reward anyone. I don’t know how this state of emergency was described in the reports to the authorities, but the examiner somehow managed to remove the entire story from the reports. Everything ended well, but for a long time all the participants tried not to even talk about this case, no one could explain what had happened to everyone, everyone just looked at the inevitable death of a person and did nothing. They say that in the army life of such stories is a dime-pond, it is impossible to explain the motives and actions. This is how complex a person is.