"God does not scold ..." On the topic of persecution of Orthodoxy 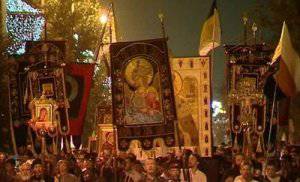 Evil no longer puts on masks, hiding behind the traditional "universal" screen. It acts openly, bitterly and arrogantly, aiming at the very heart of Russian civilization — the Orthodox Faith and the Holy Church, the only thing on which Russia and the Russian world stand. Perhaps there was no more powerful wave of persecution of the church since the Bolshevik obscurantism, when crosses were thrown from the bell towers, icons were burned and churches exploded. Now the evil has shifted to a new offensive. A series of monstrous acts of vandalism against Orthodoxy swept across Russia. Reports of new anti-Christian crimes come with frightening regularity. Reprimand of icons, cutting down of crosses, satanic dances in the main temple of Russia - all this, unfortunately, happens to our country, in reality, during our time and our fellow citizens. At the same time, such acts cause an overwhelming condemnation of the overwhelming majority of citizens, regardless of whether they consider themselves to be believers or simply live, as they say, according to their conscience. The filth and chilliness of these acts is obvious to the absolute majority. However, there is a minority, corrupted by the wicked abomination of anti-Christian ideas, driven by the enemy of the human race, who does not stop at nothing. These are ideological descendants of those who trashed temples in 20-s of the last century, betrayed and shot the family of Emperor Nicholas II, destroyed Russia, etching the spiritual and moral foundations of Orthodoxy from the people’s consciousness, replacing them with ideological chimeras contrary to traditional Russian self-consciousness. And then, and now, a relatively small group of people, supported by various “fighters against the regime” who gladly side with the distracted persecutors of faith, are consciously acting against Russia and its church. The obscurantists of the whole world, among whom there are celebrities, rebelled against Russian Orthodoxy. The anti-Christian information campaign has been fully launched and is actively supported by the relevant media all over the planet.

The scale of what is happening is very serious. In the conditions of severe information pressure exerted on the Russian society that has barely begun its return to the holy traditions of Orthodoxy, it is necessary to consolidate all healthy forces that can influence public opinion, having developed in it an unconditioned reflexal rejection of the ugliness being created. Acts of vandalism, aimed at desecrating the feelings of believers and undermining the spiritual foundations of the existence of Russian society, should be interpreted by law unequivocally as a crime, punishment for which is not only inevitable, but also severely.

In the face of the persecutors and through the ugliness they perpetrated by Russia, another challenge was thrown. By creating atrocities, their organizers carefully observe the direction of public discussion and deviations from normal for any morally healthy person to such incidents of reaction, presenting them as "evidence" of the seriousness of the split in society and a high level of hostility towards the ROC. The recent anti-Orthodox acts are test balloons thrown into the information space with the aim of violating the spiritual will and civilization choice of the majority of citizens of the country, with the aim of undermining the authority of the latter, but therefore not less powerful bastion of the Russian civilization - the Russian Orthodox Church. That is why the public reaction to what is happening should be as unambiguous and timely as possible. It should be noted that the struggle for the Faith of Christ, like the struggle for traditional civic morality, does not accept violence, it must take place strictly within the law and take place where the main threat to the moral health of society comes from - in the information space, the space of ideas and opinions.