At present, submarine missile carriers of three projects are operated as part of the naval component of Russia's strategic nuclear forces, carrying three different missile systems with different missiles. The leading place in the structure of the strategic nuclear forces is still occupied by the SSBN of the project 667BDRM. For their rearmament in the recent past, the D-9RMU2.1 missile system with the R-29RMU2.1 "Liner" missile was created.

From 1984 to 1990, seven SSBNs of the project 667BDRM "Dolphin" were accepted into the Soviet Navy. Over the next decades, they were to remain the newest and most advanced in the naval component of the strategic nuclear forces. In the initial version, the Dolphins carried the D-9RM missile system with 16 R-29RM missiles, developed at the G.R. Makeeva. This composition of weapons remained until the beginning of the XNUMXs, when the first modernization program was launched.

By the end of the nineties, the modernized D-9RMU2 missile system with the R-29RMU2 Sineva SLBM was developed. In 1999, such missiles went into series, and soon the process of updating the carrier submarines began. As they underwent medium repairs, the ships received the necessary equipment to use the new missiles.

By the end of the 9s, there was a need for the next update of the weapons complex. Soon, this led to the emergence of a new modification of the missile system with the D-2.1RMU29 index. The deep modernization of Sineva received the designation R-2.1RMUXNUMX and the name Liner.

On May 20, 2011, the first test launch of the Liner took place from a standard launch vehicle. SSBN K-84 "Yekaterinburg" North fleet from the water area of ​​the Barents Sea launched a rocket at training targets at the Kamchatka training ground "Kura". Start and flight were carried out normally; inert warheads successfully hit the intended targets with a given accuracy.

The second tests took place on September 29 of the same year. This time the K-114 Tula submarine became the experimental carrier of the Liner. The missile was launched in the Barents Sea and successfully delivered combat equipment to Kamchatka. New launches were not carried out as part of state tests.

Already in October 2011, the successful completion of flight tests of the D-9RMU2.1 complex and the R-29RMU2.1 rocket was announced. The products received a recommendation for adoption and were approved for mass production. According to the plans of the command, in the near future all SSBNs of project 667BDRM were to undergo rearmament with the introduction of a promising missile. Also mentioned was the possibility of re-equipping older ships of the project 667BDR "Kalmar", but such a program was not carried out. 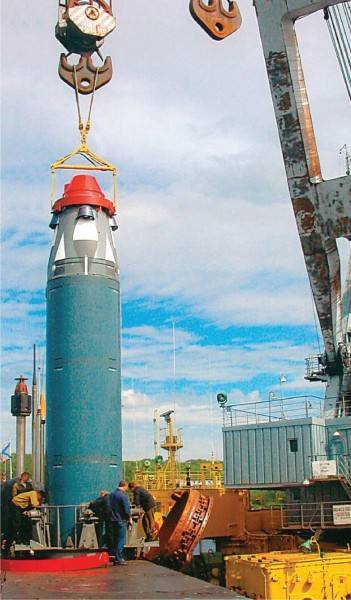 Loading the "Sineva" product into the launcher
At the beginning of 2012, the command of the fleet reported that the new "Liner" would not have to be put into service. This was due to the fact that it was about an existing rocket undergoing modernization. Consequently, no specific procedures were required associated with the emergence of new samples. However, on January 31, 2014, the Russian government issued a decree on the acceptance of the D-9RMU2.1 complex with the R-29RMU2.1 SLBMs into service with the navy.

Already in 2011, the Krasnoyarsk Machine-Building Plant mastered the serial production of new missiles. As reported, at that time, the Sineva product remained in the series, and for some time it was produced in parallel with the Liner. Subsequently, the production of R-29RMU2 was phased out in favor of a newer SLBM.

According to open data, the Liner rocket is a deep modernization of the previous Sineva. The main structural elements and instrumentation have undergone various modifications. At the same time, the main attention is paid to updating and increasing the effectiveness of combat equipment and means of overcoming missile defense.

R-29RMU2.1 retains the dimensions and weight of the base product - length 15 m with a diameter of 1,9 m, launch weight - 40,3 tons. The three-stage scheme and liquid propulsion systems at all stages are preserved. At the same time, the dimensions of the steps were changed and other solutions were introduced. The launch range remained the same, up to 11 thousand km.

Launch of the "Liner" is carried out from the standard mine installation of submarines of project 667BDRM. After passing through the modernization and installation of the necessary instruments, the carrier submarine is able to use new missiles. It also retains full compatibility with the older "Blue". In the course of the exercises in recent years, the Dolphins have used both types of missiles. 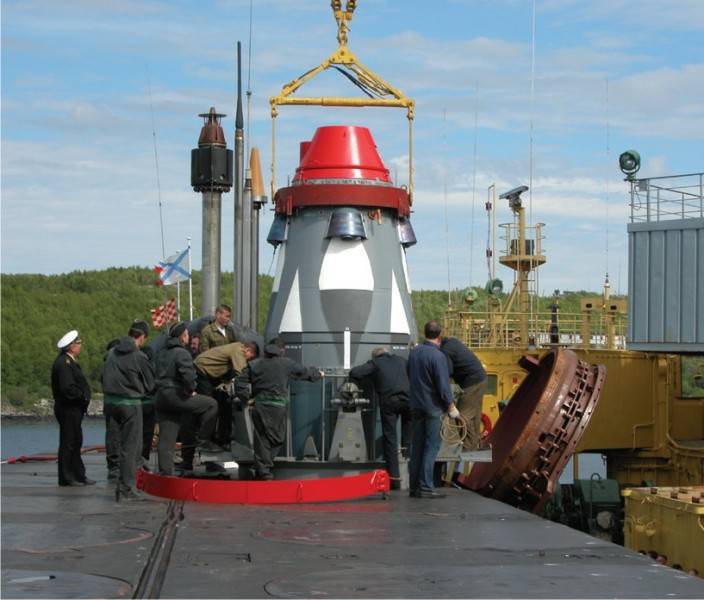 Loading "Liner"
Several options for combat equipment have been proposed for the Liner SLBM. The missile can carry warheads of low and medium power (up to 500 kt), as well as a complex of means of overcoming missile defense. One missile is capable of carrying from 4 blocks of medium power to 10 low-power, as well as anti-missile defense systems of various configurations. It is curious that the low-yield warhead is similar to that used in the Topol-M, Yars and Bulava complexes.

The creation and adoption of the R-29RMU2.1 "Liner" rocket made it possible to solve several urgent problems and had a positive effect on the state and prospects of the naval component of the strategic nuclear forces. With the help of the new missile, it was possible to improve the prospects of the submarine forces, as well as expand their combat capabilities.

Due to the transition to the "Liners" it was possible to extend the planned service life of the existing SSBNs of pr. 667BDRM. According to the plans of the beginning of the last decade, such ships will be able to continue service until at least 2025-30. and retain the required efficiency. The possibility of extending the service life is of particular importance due to the specifics of the combat strength of the submarine forces and its prospects.

At the moment, there are five submarines of project 667BDRM in combat, all serve in the Northern Fleet. Another ship is undergoing medium repairs and will return to service in the future. Dolphins are still the main strategic submarine missile carriers. The newer pr. 955 "Borey" is still outnumbered by them, and this situation will begin to change only this year - with the delivery of the fifth and sixth cruisers. 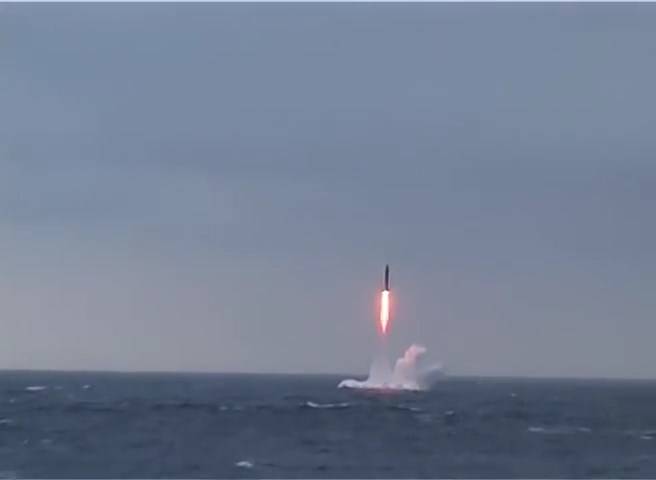 R-29RMU2 rocket launch from the Tula submarine, November 2014
At the same time, an equal number of submarines will not yet ensure equality in the number of missiles. A group of six Dolphins can carry up to 96 R-29RMU2 / 2.1 products, while six Boreyevs are equipped with only 72 Bulava missiles. Similar trends are observed in the theoretical number of deployed warheads.

Retaining the main components and assemblies of the previous "Sineva", the new "Liner" received improved combat equipment. The presence of two types of warheads and different variants of means of overcoming missile defense allows you to make various combinations of combat load. This provides greater flexibility in the use of SLBMs and facilitates the preparation of plans for the deployment of strategic nuclear forces, taking into account the existing restrictions, strategies, etc.

The near future of the underwater component of the strategic nuclear forces is determined by work in two directions. The first provides for the construction of modern SSBNs of the project 955 (A) and the production of R-30 "Bulava" missiles for them. The creation of a large grouping "Boreyev" is complex and takes a lot of time, and all the desired results will be obtained no earlier than the middle of the current decade.

The second task is to maintain the technical condition and combat effectiveness of the existing cruisers of the project 667BDRM, while maintaining a special status. For this very purpose, at the turn of the 9s and 2.1s, the modernized D-XNUMXRMUXNUMX missile system with the Liner missile was developed, which has a number of important advantages over previous systems.

Project 667BDRM submarines with R-29RMU2.1 missiles generally meet the current requirements for strategic missile-carrying submarines and make a decisive contribution to the nuclear deterrence of a potential enemy. However, their age imposes certain restrictions, and in the foreseeable future, such ships will have to be withdrawn from the fleet, replacing them with modern ones. It is unlikely that new projects for the modernization of Dolphins and Liner will appear in the future, however, in their current form, they will be able to continue service for the next 5-10 years, effectively solving the assigned tasks.