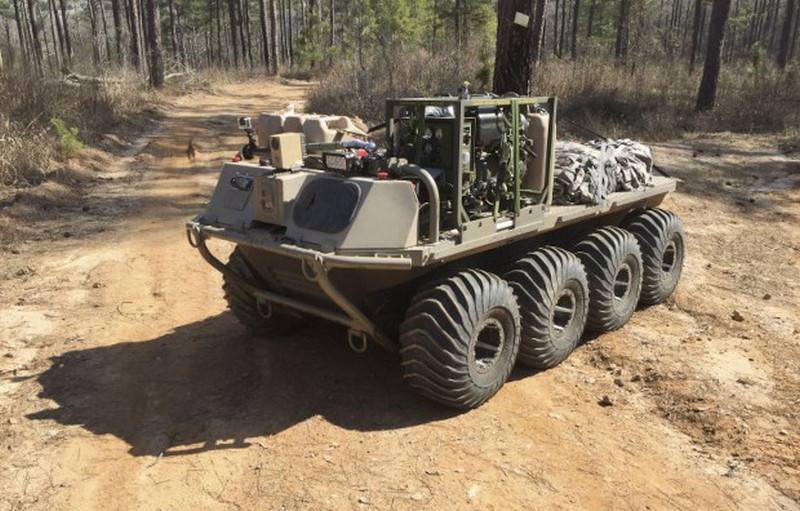 The US Army will conduct the final tests of the wheeled ground robots MUTT (Multi-Utility Tactical Transport, multifunctional tactical transport). According to NPlus1, tests are scheduled for April.


According to the plans of the US Army (Ground Forces), after the final tests, small-scale production of robots will begin in September this year, and by the end of the year they will be put into service.

MUTT was developed by General Dynamics Land Systems as part of the SMET (Squad Multipurpose Equipment Transport) tender for the supply of a ground robot for the transportation of goods to the US Army. The company's specialists offered the military a wheeled robot MUTT (Multi-Utility Tactical Transport). The robot is designed in three versions with wheel configurations 4 × 4, 6 × 6 and 8 × 8, at the same time, the wheelbase can be replaced with a tracked one.


According to the company, MUTT is capable of transporting goods weighing up to 454 kg, working for 72 hours and covering a distance of up to 100 kilometers. In motion, the robot can generate electricity with a power of up to 1 kW, while at a standstill - up to 3 kW.

The operator can control the robot, but there is also a fully automatic mode and a mode of following the soldiers.

The design of the device provides, if necessary, the installation of a combat module or platform for launching drones. The main tasks are the transportation of ammunition, equipment, and the evacuation of the wounded.

Earlier it was reported that under the terms of the agreement, General Dynamics Land Systems must supply the US Army with 624 new robots, maintenance equipment and simulators. The first batch of MUTTs is due to enter the troops in the first quarter of 2022, and the end of deliveries is scheduled for the end of October 2024.

Ctrl Enter
Noticed oshЫbku Highlight text and press. Ctrl + Enter
We are
The US Army chose a transport robotThe 20 rating of the largest arms deals, decisions on which were made in 2012
Military Reviewin Yandex News
Military Reviewin Google News
49 comments
Ad