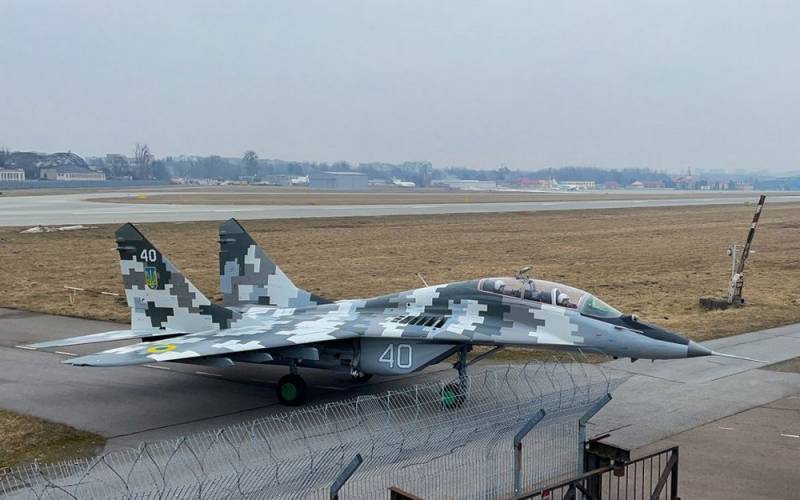 The Air Force of the Armed Forces of Ukraine received a MiG-29UB fighter, repaired at the facilities of the Lviv State Aircraft Repair Plant. This is reported by the Ukrainian media with reference to the press service of the plant.


The fighter that has undergone repair has already made test flights and went to the place of deployment. It is noted that the plane was repaired as part of the state order last year, this year the Lviv aircraft plant has no orders, and after the entire volume of work has been completed, the enterprise can simply stand up.

Combat training fighter with tail number 40 "white" made test flights and left for the tactical brigade. aviation Air Force of the Armed Forces of Ukraine
-speak in the message.


According to the Ukrainian Military Pages, last year, the Air Force of the Armed Forces of Ukraine received four modernized MiG-29 fighters and one rebuilt after the accident. In addition to the MiG-29, the Armed Forces received one Su-27UB, one SU-24MR, one Su-25 and two UBS L-39M1.

This year, one MiG-29MU1 was lost, damaged in an accident involving a car crashing into the tail section of the aircraft. According to preliminary data, the fighter cannot be restored.

Note that the MiG-29 fighter is the main combat aircraft of the Air Force of the Armed Forces of Ukraine. Despite the obsolescence of the aircraft fleet, Ukraine cannot independently carry out the appropriate modernization of the MiG-29 fighters due to the severance of all economic ties with Russia.
Ctrl Enter
Noticed oshЫbku Highlight text and press. Ctrl + Enter
We are
Polish Air Force replenished with two M-346 Master combat training aircraft (UBS)Ukrainian Air Force plans to replenish 2017 with airplanes in 60
Military Reviewin Yandex News
Military Reviewin Google News
20 comments
Ad