"Thor" in his prime

March 31 2021
25
35 years ago, on March 18, 1986, the Air Defense Forces of the Ground Forces adopted the Tor air defense system (according to the then classification - SAM) "Tor". The head developer of the Tor air defense missile system was the Research Electromechanical Institute (the chief designer of the complex was V.P. Efremov, the chief designer of the combat vehicle was I. M. Drize), the co-developer for the manufacture of prototypes and the head manufacturer was the Izhevsk Electromechanical Plant (now IEMZ Kupol, part of the Almaz-Antey VKO Concern). 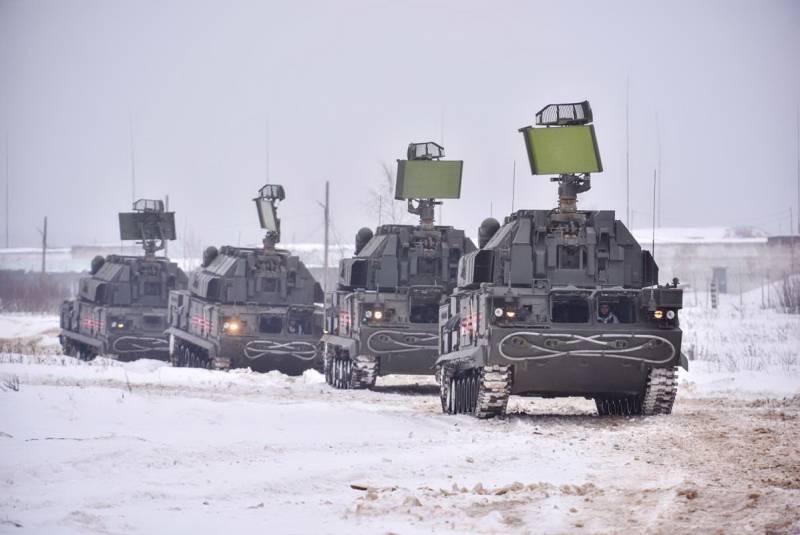 The development of a new anti-aircraft complex, which replaces the "Osa", was carried out for eleven years and was crowned with complete success. The troops were armed with an air defense system that was long ahead of its time and at the same time has a huge modernization resource.

Usually, a new combat vehicle retains many of the features of its predecessors. An experienced eye will easily see the general design features of the Yak-9 and Yak-1, T-62 and T-54, and the inexperienced will not even notice the difference between them. But there are times when the newly adopted equipment is radically different from its predecessors. In such cases, they say that the designers have made a revolution. It is precisely this revolutionary product that the Tor air defense system has become. Even outwardly, he had little in common with his predecessor. Instead of a light antenna-triggering device - a massive "tower". The inclined guides of the missile defense system gave way to an internal vertical layout (looking ahead, it should be noted that the designers of foreign analogues will come to vertical launch only after two decades). The chassis is not wheeled, but tracked (one of the main purposes of the "Torah" is to provide anti-aircraft cover tank divisions, and the new air defense system had to be equal in cross-country ability to the main tanks). Radar antennas - with a phased array. The “stuffing” of the complex was no less radically different - analog computing devices were replaced by digital ones. But there were also some traits related to the Wasp. In particular, the radio command guidance method was retained. Considering the power of the radar, the radio command telecontrol used in the complex in its area of ​​responsibility significantly surpassed (and surpasses) alternative methods of missile guidance. The only drawback of RC-guidance is the impossibility of providing firing according to the "fire-and-forget" principle, which allows the implementation of homing heads. But, firstly, the GOS, having this, perhaps, the only merit, had a number of significant shortcomings, and secondly, they significantly increased the cost of missiles. Soviet designers who created weapon to repel the massive invasion of the enemy, they could not, of course, leave aside the "economy of war". And it is worth noting that the course towards economical missiles remained true after the end of the Cold War. Yes, today it is difficult to imagine an open armed conflict between the world powers. But now, not only small countries, but also individual armed groups can afford an impressive fleet of air attack weapons - through the use of UAVs. And it is for the fight against drones that the Tora missiles are optimal - inexpensive due to the use of RC guidance and accurate due to a powerful guidance station. The choice of missiles with the seeker turned out to be fully justified. The task of increasing the fire performance began to be solved in a different way - increasing the channeling rate on the target, first to two for the "Tor-M1", then up to four for the "Tor-M2U" and "Tor-M2". 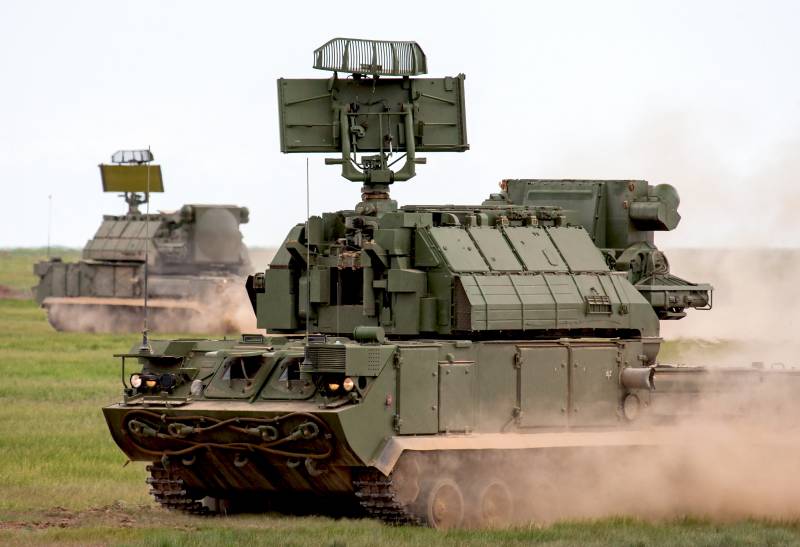 Since the adoption of the first "Thor" air defense system of this family, there have already been three waves of deep modernization. The newest Russian air defense missile system "Tor-M2", equipped with powerful and perfectly protected from interference detection and guidance radars, is capable of effectively intercepting high-speed (700 m / s and above) low-flying (10 m and below) small-sized (RCS - 0,1 m2 and less) SVN. The far border of the affected area (at least 15 km) allows you to cover large-area objects, and the upper (12 km) - to deal with high-flying tactical air defense systems. Heading parameter ± 9,5 km provides cover for a front 19 km wide. The radio command guidance method makes it possible to continuously correct the flight of missiles and direct them to the target along the most effective trajectory. BK - 16 missiles per one BM of the complex - allows you to reflect a massive raid, while the complex is capable of simultaneously firing at four targets. The probability of hitting them is close to 100%, which made it possible to abandon the practice of firing two missiles at one target. The deployment time of the "Tor-M2" complex is 3 minutes, which ensures the rapid introduction of the air defense missile system into battle in the event of a sudden enemy raid. At the same time, reconnaissance of the air situation and firing can be carried out in the movement of the complex.

SAM family "Tor" can be integrated with various types of carrier base. IEMZ Kupol serially produces the Tor-M2 air defense system on a tracked chassis, Tor-M2DT on the basis of a two-link tracked cross-country conveyor, DT-30PM and Tor-M2K on a three-axle wheeled chassis. At the request of the customer, the complex can also be produced in the version of an autonomous combat module - "Tor-M2KM", suitable for installation on any carrier base of suitable carrying capacity, transportation by helicopter and railway platform. Diversification in terms of the base significantly expands the scope of use of the "Tor" air defense systems: "Tor-M2" is the "standard" version of the air defense system for tank divisions, "Tor-M2DT" is intended for use in difficult terrain, and "Tor-M2K" is optimal for use in countries with a developed system of paved roads.
A significant advantage of the Russian complex over such modern western air defense systems is the deployment time from the marching order to the combat order - the period during which the complex can "from a state of rest of reconnaissance and fire weapons" go to active reconnaissance of the air situation and intercept targets. "Tor-M2" is deployed within three minutes, without stopping movement, and also on the move can conduct combat work and to detect and intercept targets. For Western counterparts, the deployment time can reach 10-15 minutes, and they can carry out combat work only after a complete stop. The short deployment time and the ability to conduct reconnaissance and fire on the move, coupled with a tracked chassis, make the Tor-M2 air defense system a true air defense system of the Ground Forces - highly mobile, capable of accompanying tank and motorized rifle divisions on the march and in all types of combat even on rough terrain. , without hindering their movements, provide reliable cover from air attacks.

Today air defense systems of the "Tor" family are the main means of air defense in the tactical echelon of the Ground Forces. They are able to provide protection for important military and civilian objects and reliably cover troops on the march and in all types of combat, without hindering their movement. Within their area of ​​responsibility, they successfully counteract the entire spectrum of modern tactical air defense systems - from aircraft, helicopters, cruise, anti-radar and other guided missiles, gliding and guided aerial bombs and unmanned aerial vehicles in conditions of intense fire and radio, optical-electronic countermeasures, in any weather conditions, day and night. SAM family "Tor" serve in the most critical areas. They provide air defense for the Russian base in Khmeimim. They serve in the Kaliningrad Region and the Eastern Military District. Tor-M2DT provides air defense for the Arctic group of Russian troops.
The main advantage of the Tor-M2 air defense system is the ideal balance of tactical and technical characteristics while reaching the maximum in the most key positions. It is possible to design an air defense system that will have a longer firing range or more means of destruction of a target due to the loss of some other important characteristics. You can create a simpler and, accordingly, less expensive complex with a significant decrease in combat capabilities. It is possible to overtake "Thor" by some separate characteristic. It is impossible to overtake the "Thor" in terms of the aggregate performance characteristics.

At the same time, the improvement of the complex continues. It is led by IEMZ Kupol, which since 2013 has been the parent enterprise not only for the production, but also for the development of the MD air defense missile system. The total list of topics of research and development work aimed at improving the "Torah" exceeds two dozen titles. Work is being carried out in the direction of increasing noise immunity, increasing the ability to detect and defeat actively maneuvering, small-sized or weakly emitting air targets. In addition, the tasks of increasing the probability of hitting air targets are being solved; expansion of the affected area; increasing the maximum speed of targets hit, increasing the parameter of hitting air targets; full automation (robotization) of the combat work process; reducing the reaction time, etc.

The Tor-M2 air defense missile system not only has no equal in the world in terms of its performance characteristics, but also optimally corresponds to the tasks of building an air defense system aimed at countering the most urgent air threat at the moment: a sudden massive attack of small-sized air attack vehicles traveling at extremely low altitudes. And this is a huge merit of both domestic military thought, which managed to predict the nature of the upcoming battles and correctly set the task, and Soviet and Russian designers who managed to solve this problem and created an air defense system capable of fighting not only existing, but also promising air attack weapons.