The throwing range of a hand grenade is determined by the physical condition and skills of the fighter, but does not exceed several tens of meters. To attack more distant targets, it is necessary to use technical means - a variety of grenade launchers. At the end of the seventies, as an experiment, a disposable grenade launcher "Penal" was created, which was distinguished by its small size and rather high combat characteristics.

The hand grenade is small in size and weight, but its flight range does not exceed 30-40 m. Grenade launchers can shoot hundreds of meters, but have significant dimensions and weight. In a number of situations, a fighter may need a light and compact system suitable for throwing a grenade over long distances. Under-barrel grenade launchers became a good solution to this problem at one time, but they could only be used with machine guns, which could lead to difficulties of an ergonomic and operational nature.

At the end of the seventies, the designer of the Tula TsKIB SOO Valery Nikolaevich Telesh began to develop an original grenade launcher, combining convenience and high combat qualities. The product with the working name "Pencil" was based on a number of curious ideas and was distinguished by the most simple design. The grenade launcher was planned to be made disposable and always ready for use. He had to use a VOG-25 shot or other 40-mm ammunition, incl. non-lethal equipment.

The Penal disposable grenade launcher externally was a metal cylinder with closed ends. On the side there was a simple trigger mechanism with a safety pin and a ring. The length of the item was 200 mm, the diameter was approx. 45 mm, weight with ammunition - 700 g.

The main part of the grenade launcher was a rifled barrel. It was made in the form of a thin-walled aluminum tube with the necessary holes and internal elements. In the front of the tube, rifling was provided, similar to the thread of the GP-25 grenade launcher. To fix the shot in the working position, there were stops inside the barrel.

The trigger was placed on the side of the barrel. It consisted of a spring plate with a drummer, its support and a safety catch in the form of a check. When fired, the spring was supposed to provide a blow to the grenade primer. 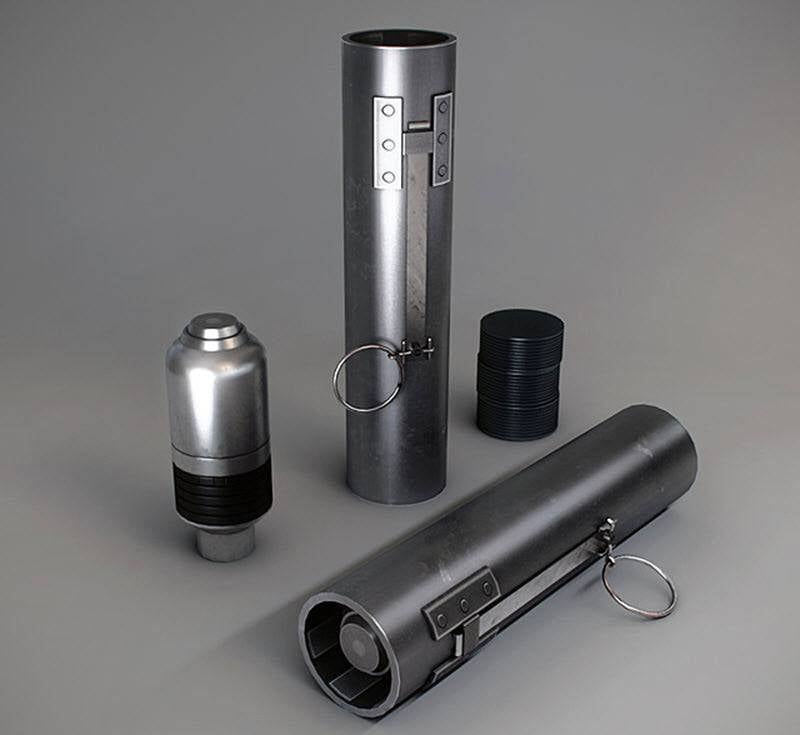 Reconstruction of the appearance of the "Penal". In the foreground is a combat-ready grenade launcher, behind is a VOG-25 shot, a barrel and anti-mass blocks. Graphics War-time.ru
Any adaptations to improve ergonomics weapons were not provided. It was proposed to take and hold the grenade launcher by the barrel-body. Horizontal guidance was carried out "by eye". Experienced grenade launchers did not have the means for vertical guidance, but, according to some reports, in the future it was planned to apply a simple rangefinder scale to the hull.

The "Pencil" product was to be assembled and equipped at the factory. A VOG-25 shot or other product with suitable characteristics was placed in the central part of the barrel. In the back of the barrel, behind the grenade, an anti-mass was placed in the form of a set of round plates made of aluminum or plastic. The ends were closed with knock-out covers that were torn off when fired. The recoilless system has reduced the requirements for barrel strength and made it lighter.

As part of the Penal system, it was proposed to use different ammunition. First of all, this is the VOG-25 fragmentation grenade and its modifications. It was also allowed to use the unified product "Nail" with an irritant like CS, smoke grenade VDG-40, etc.

The design muzzle velocity of the grenade reached 90 m / s. The maximum firing range is 300 m. Low accuracy was expected, but it had to be compensated for by the action of the ammunition: the scattering of fragments of a combat grenade or the formation of a gas cloud from a non-lethal product.

By simplifying the design as much as possible, it was possible to reduce the cost of mass production. The serial "Penal" was not much more expensive than the VOG-25 fragmentation grenade. Consequently, for the price of two grenades, it was possible to get not only ammunition, but also a device for throwing it at a long distance.

From the point of view of the principles of operation, the "Penal" was a recoilless weapon with recoil damping due to the release of counter-mass. This feature imposed some restrictions on the application.

The grenade launcher could be carried in any suitable pouch or otherwise. Before the shot, it was necessary to remove it and remove the ring with the check. After that, the product was ready to fire. The "pencil case" was required to be taken away from oneself in order not to fall under the influence of powder gases or flying out elements. It was also necessary to monitor the safety of others. 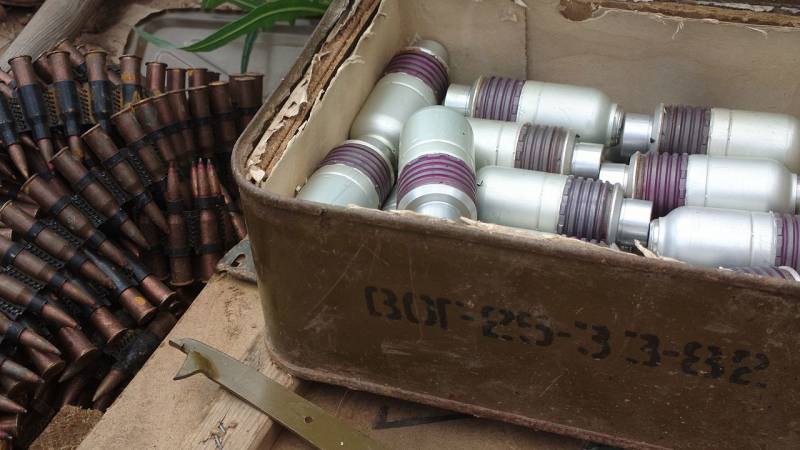 VOG-25 grenades in a standard container. Photo Wikimedia Commons
With the help of an eye gauge and a scale, the shooters had to aim at the target, after which it was possible to press the trigger. This led to the ignition of the grenade charge and to a shot. The grenade tore off the front cover and sent to the target, and the powder gases through the rear cut knocked out the counter-mass and the cover. This action of the weapon made it possible to do without tangible recoil.

It is known that at least one experimental grenade launcher was manufactured at TsKIB SOO, which was used in tests. This product was tested at a test site and its real characteristics were established. Apparently, the prototype was repeatedly reloaded, which showed the fundamental possibility of manufacturing not only disposable grenade launchers.

The design parameters and fighting qualities were confirmed. However, this fact did not affect the real prospects of the grenade launcher. According to known data, none of the departments, considered as potential customers, did not want to purchase "Pencil cases". In the existing weapons systems of the Ministry of Defense, the Ministry of Internal Affairs and the KGB, there was simply no place for such products. The military and security officials continued to use standard hand grenades and grenade launchers of all existing models.

According to some sources, "Penal" was nevertheless adopted by one of the power structures and was even produced in small batches. However, such information is not confirmed by anything - and contradicts reliably known information from other sources.

The reasons for the failure of the Penal project are obvious. First of all, the prospects of this development were negatively affected by its proactive nature. None of the departments ordered the development of such weapons - because they did not need them. According to the test results, interest in this product did not appear.

The Penal project offered an original solution to the problem of the grenade throwing range, but the need for such a solution is questionable. It is difficult to imagine a situation in which a fighter will need the most lightweight grenade launcher capable of sending a single grenade to 200-300 m without special requirements for hitting accuracy. In real situations, it is possible to get by with hand grenades and various grenade launchers with different characteristics.

Thus, the main result of the Pencil project should be considered a test of the viability of the original idea. It was found that the technical tasks set can be solved, but their result is of low practical value. As a result, the experimental grenade launcher did not reach the series and did not enter service. But he left an interesting mark in stories domestic grenade launchers.