Who Will Go North: Lessons from Blocking the Suez Canal 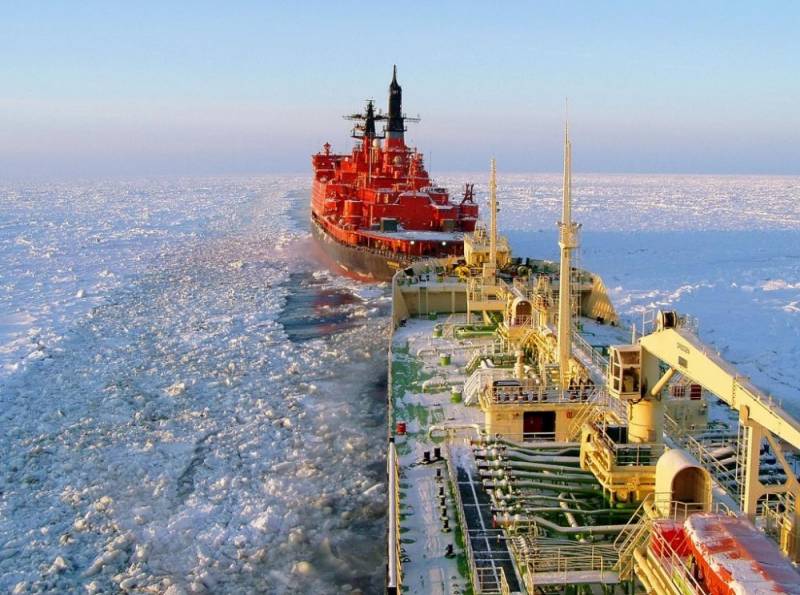 Seven days that shook the world

The container ship incident on the Suez Canal changed a lot. Some believe that what happened was an accident, others believe that this is a technique used by a rival in a big political game. Lessons to be learned from this stories.

But, whatever one may say, Suez fell out of the comfort zone. Business will be forced to look for an alternative to it. And the Northern Sea Route has good potential, albeit not so unambiguous.

Everyone finally exhaled. Main Sea Gate - The Suez Canal is unlocked. The container ship Ever Given, on which numerous curses fell, and in Russia - rather, anecdotes, after seven days of inactivity, was removed from the shallows. 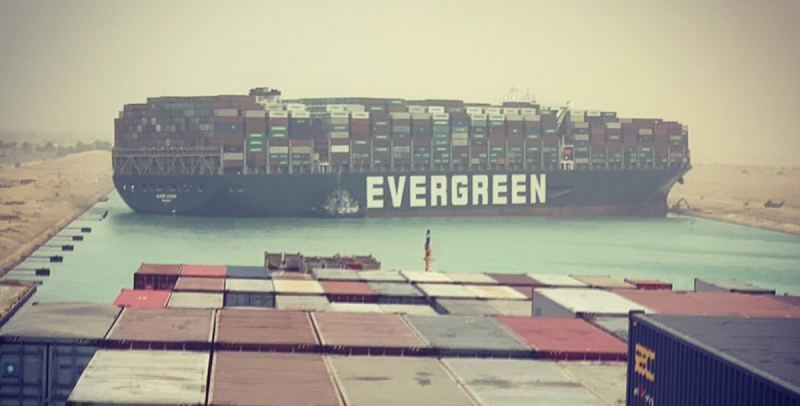 Photo: fallenhearts17 / instagram.com
The huge colossus, designed to carry over 20 shipping containers (Twentyfoot Equivalent Unit, TEU), went further north. Mohab Mamish, adviser to the Egyptian President for the development of seaports and the Suez Canal, has already announced that navigation has begun along the canal.

According to calculations, it will take several more days for the movement along the key water section to return to normal. The unexpected closure of the canal gave rise to big problems for some, unexpected bonuses for others, and at the same time renewed the discussion about alternative routes.

First, about the problems.

The "traffic jam" in Suez stopped about 450 ships. According to Bloomberg, the total damage from blocking the channel is $ 9,6 billion per day. The world trading system was somewhat feverish from a "blood clot".

Indeed, for example, more than 2019 thousand ships passed through the Suez Canal in 19, 1,25 billion tons of cargo were passed. And this, whatever one may say, is about 13% of the volume of international trade and 10% of oil transportation. 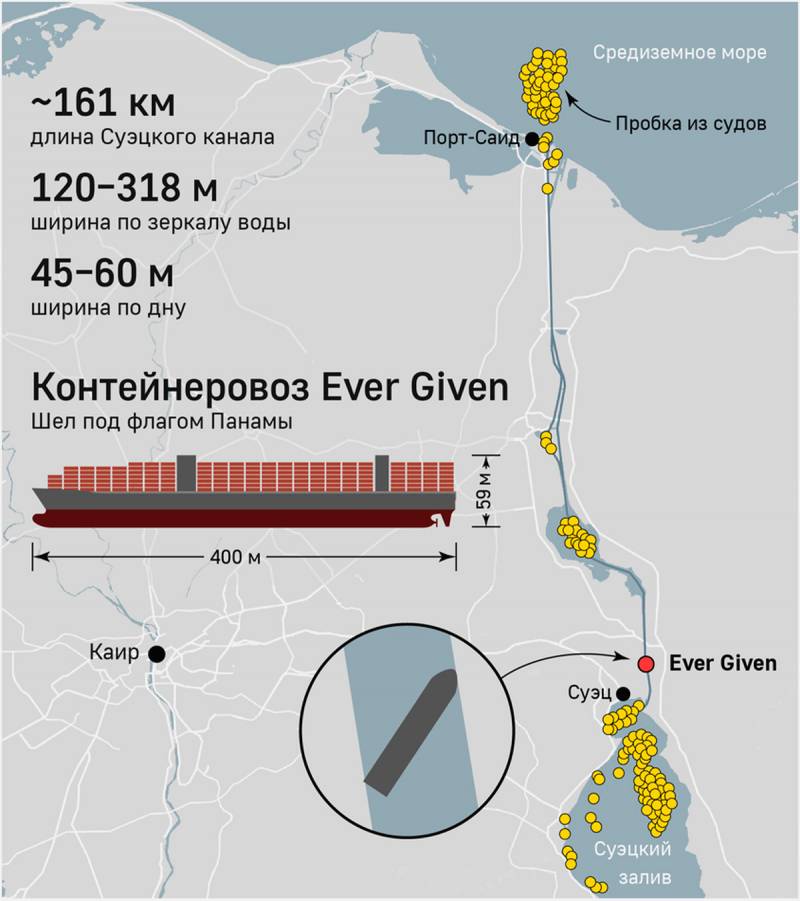 Now about the bonuses.

The carriers, of course, were worried. Contracts are “burning” from such stops, especially when perishable goods are being transported. But here it must be borne in mind that all goods are insured, and therefore it is time for insurance companies to twitch.

But the maritime companies, apparently, are even happy. Due to the state of emergency on the Suez Canal, the cost of sea transportation has increased significantly. According to Bloomberg, the delivery of one 40-foot container from China to Europe will now have to spend about $ 8 thousand, and a year ago it was 4 times cheaper.

Oilmen also turned out to be in positive territory. The negative trend of the fall in world prices for black gold not only stopped, but was replaced by an increase - by 7%. Although after News oil quotes began to fall again after Ever Given was floated.

Alas, negative expectations from the third wave of coronavirus in Europe turned out to be stronger. And here a lot depends on the decisions of the participants in the OPEC + agreement. If exporters decide to maintain production restrictions in May, then a sharp drop in oil prices will definitely be avoided.

What alternatives to the route through the Suez Canal are we talking about?

Of course, the old classical route that goes around Africa from the south came to life at once. However, it is 9,6 thousand kilometers and 10 days longer. All this translates into significant additional costs.

Carriers, predicting that the situation with Ever Given would drag on, began to deploy ships on the approach to the Suez and send them around Cape Hope. But businessmen count money.

The behavior of the leader of sea transportation - Maersk company is significant. As reported on the official website, she had 34 vessels on hold, 15 were rerouted around Africa. So, as soon as the "traffic jam" on the Suez Canal collapsed, Maersk immediately decided to return several ships from the "African" campaign. Time is money, as they say.

In Russia, and not only in Russia, the Northern Sea Route has returned to the information field. It is known to be noticeably shorter than the route from Asia to Europe through the warm seas. For several years now, the Russian authorities have been focusing on the development of the Northern Sea Route. There is a gradual arrangement of ports on the route, related infrastructure, the icebreaker fleet is increasing, etc.

But a significant number of experts are still skeptical about the prospects of the NSR. First, they say, the incident with Ever Given did not come right on time. That is, not just in time. Now, if it happened in August or September, when the ice situation on the Northern Sea Route is favorable, then the carriers would certainly turn their eyes to the north.

In the meantime, unfortunately, only Suez.

Secondly, modern business is used to receiving quality service. And the infrastructure of the Northern Sea Route, to be honest, is not yet ready to receive a large number of ships, and even large tonnage. There are simply no fully equipped ports along the route. 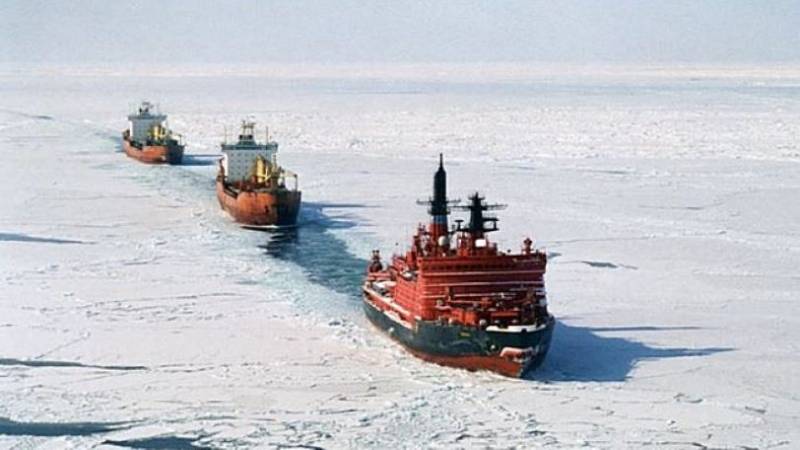 Russia has only Murmansk. But where is he? At the very exit to Europe, and you still have to get to it. In addition, we repeat, carriers are insured without exception. And insurance companies assess the risks. So, they unambiguously classify SMEs as a high-risk zone, and hence the corresponding insurance payments.

Thirdly, on the main route from Southeast Asia to Europe, cargo does not go without stopping from point A to final B. Up to half of the cargo, as the analysis says, remains in ports along the route. It is profitable, but this option is certainly not provided for the NSR.

Fourth, let's not forget that China is actively developing a land-based alternative - the One Belt - One Road project. The incident in the Suez Canal will definitely spur the PRC to invest even more actively in the development of this super-project.

And yet the future belongs to the Northern Sea Route. Time works, surprisingly, for him. First of all, one should not discount the conspiracy theory that the closure of the Suez Canal is the work of the United States.

The incident, surprisingly, happened just then, when China sharply intensified in the Middle East and Europe. Chinese Defense Minister Wei Fenghe is paying a visit to Europe from March 24 to March 31. And the foreign minister of the country went on a Middle East tour: Saudi Arabia, Turkey, Iran, UAE, Bahrain and Oman.

And the initiatives do not sound weak: direct negotiations between Palestine and Israel, a conference on security in the Persian Gulf. And all under the auspices of China. The United States went into hysterics from such Chinese arrogance.

Therefore, the negotiations between the United States and China in Anchorage (Alaska) were predetermined: there will be no peace between the two giants. And the unexpected maneuver of Ever Given somehow fits very organically into the overall political mosaic.

And where, tell me, the Northern Sea Route?

Very much to do with it. Business thinks about money and time. The Suez Canal has ceased to be comfortable for the world economy. Now no one will give a grudge that a new blocking of the main line will not happen in the future. 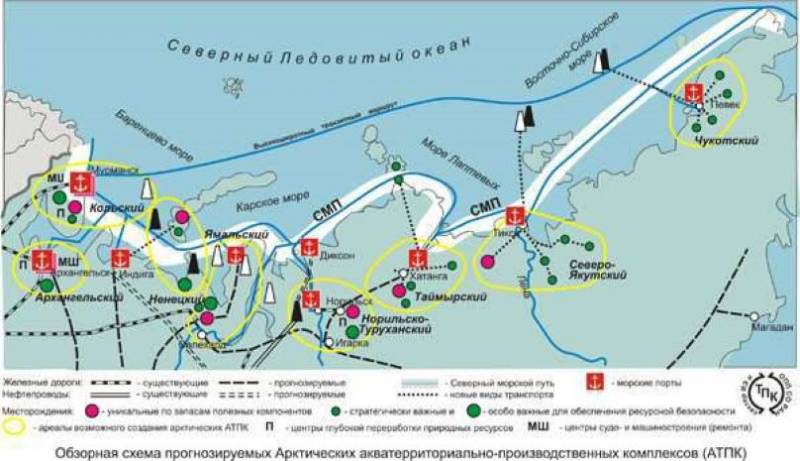 Even for purely technical parameters. Now ships with a large tonnage rule the ball on the seas. The shipping market has been divided up by several global companies, and their favorites are ships like Ever Given with 20 containers. Another breath of wind and please.

China, realizing that the United States will not give up the Middle East field so easily, will be forced to look for an alternative. The Northern Sea Route is just a suitable option. He is controlled by a trusted partner, and even more - an ally.

Russia is forced to converge more and more with the PRC, given the overwhelming pressure from the United States. But let's not forget about Europe, which makes convulsive attempts to abandon the role of a puppet in the hands of Uncle Sam. The NSR is an unambiguous trade alternative for the European Union, albeit not in the very near future.

Russia has already clearly declared its sovereignty over the sea waters adjacent to the country's Arctic coast. So far, the Northern Sea Route is basically a route for the transportation of liquefied natural gas produced in Russia's northern fields.

But the same Maersk has already flown its container ship along the NSR, there is no doubt that others will follow. And the infrastructure of the track will be improved, the technologies allow it. And Chinese investments will help. They will come. And here it only remains for Russia to act wisely - to develop the Northern Sea Route, but also not to miss the initiative.

But that's another story...