Why are 11 US Navy aircraft carriers not enough?

April 1 2021
29
Kyle Mizokami, whom we have already studied well thanks to his impressive competence in naval questions and such a charming sense of humor, pleased me with another masterpiece (I really am not afraid of this word).


The Senate and the US Congress are arguing over whether it's time to stop building aircraft carriers, not send (yes, send) a couple of the oldest ones for scrap, and old Kyle pleases us with material of a completely different kind.

So how did old Kyle make us happy this time? But what: referring to the opinion of admirals in various positions in the fleet, Mizokami repeats after them simply amazing news: 11 aircraft carriers are not enough for the US Navy. 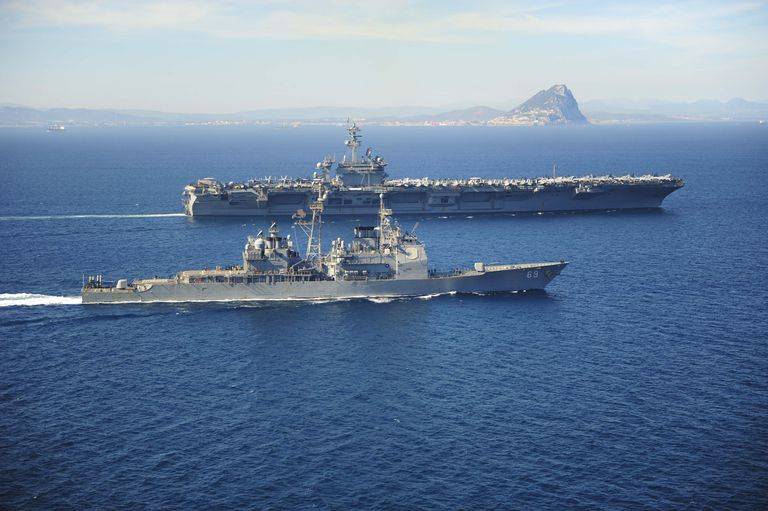 It is necessary either more aircraft carriers, or the existing ones to be used not so actively.

The most interesting thing is that just recently, in the Senate, during a speech on the confirmation of his candidacy for the post of Commander of the Asia-Pacific Forces, Admiral John Aquilino said that “The United States has the necessary number of aircraft carriers to meet the needs around the world, if only additional problems. "

It should probably be recalled here that, according to the law, the US Navy must operate at least 11 aircraft carriers to ensure the country's security. And recently, there have been many reflections on the fact that, in fact, the States do not need so many expensive whoppers. It makes sense to reduce the amount, and spend the freed up money on something more urgent.

In general, nothing new.

However, these statements generated a flurry of retaliatory attacks. And this is quite natural. Money, and everything connected with aircraft carriers is not just money, it is AMOUNT, and there will always be applicants for it.

As for the counterarguments, there is a lot of reasoning and reports that have appeared about how overworked the crews of aircraft carriers are. The culmination was the record 10-month combat duty of the aircraft carrier "Nimitz", primarily due to the fact that it could not be replaced in time. The rest of the ships were either on similar duty or under repair. 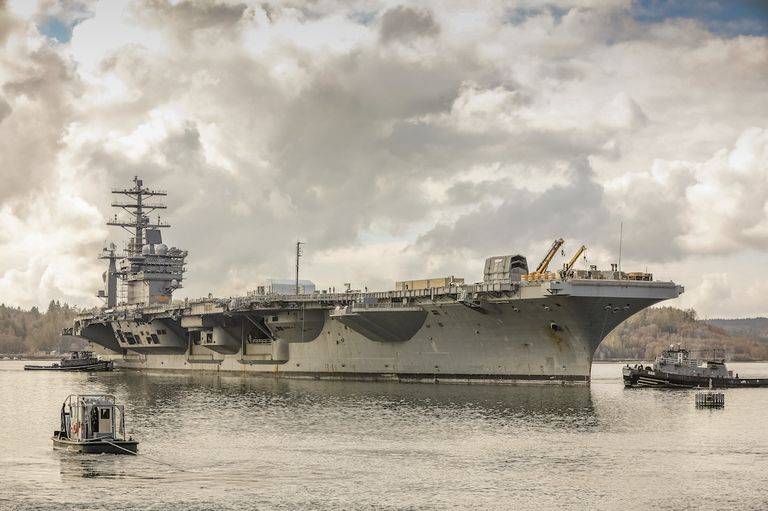 And here a simply masterpiece conclusion begged: it is necessary to build more aircraft carriers, so that the crews of the ships would not be killed in the service in the name of their country. Or (if not build) you need fewer tasks for aircraft carriers.

At the hearing, Senator J. Roger Wicker asked Aquilino if 11 aircraft carriers were enough for the Navy:
“We have fulfilled the law with 11 (ships - approx.), But is that enough? Just tell us — we need to know. We can change the law of the country if we get enough votes. "

This is an interesting question, isn't it? The point, apparently, is that Wicker represents the state of Mississippi, where the shipyard Huntington Ingalls Industries (HII) is located, which builds ... aircraft carriers! Not only in Mississippi, but (mostly) in Virginia.

Aquilino replied, as befits a sailor:
"I think the size of these forces is right at the moment, unless there are additional challenges."

About these "additional problems" ... Interestingly, in general they can be divided into two groups. The first is some kind of suddenly announced enemy. So strong that additional aircraft carriers may be required to curb and reconcile it. Can you imagine this quickly now? So I can't.

Appointing an enemy in the United States is a simple and common business, but in this case it may not work out.

And the second one. This is the technical fatigue of ships, the need to spend huge sums on their repair and maintenance. The same "Nimitz" has been in service since 1975. Eisenhower has been stepping on his heels since 1977. 45 years in the ranks is no joke.

And they serve and will serve. At least, until they sort out the problems of "Ford", which was supposed to take up combat duty in 2018, but in fact it is no longer expected until 2024. Technical reasons. On a brand new ship.

By law, the navy is required to operate at least 11 aircraft carriers. And while Wicker is right that the service has 11 carriers, that doesn't tell everyone. stories... The 11th aircraft carrier, the new USS Gerald R. Ford, cannot be deployed at this time. The ship, whose first operational patrol was originally scheduled for 2018, is stuck on technical issues and may only conduct its first patrol in 2024.

And despite the fact that there are no big conflicts in the world, for some reason American aircraft carriers spend quite a lot of time on military campaigns. 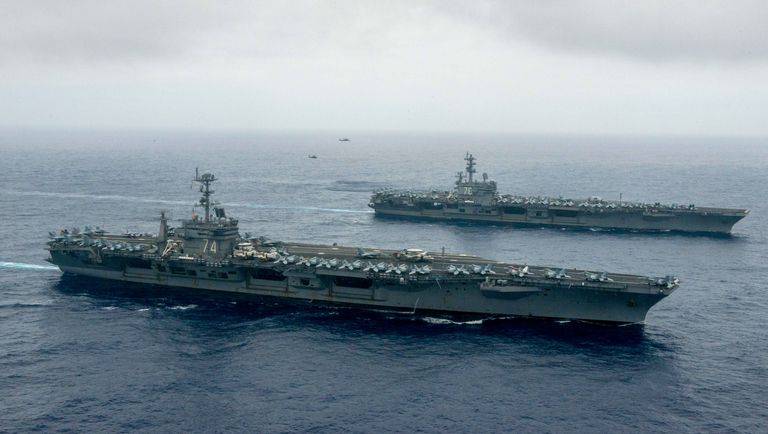 During the Cold War, 13 to 15 aircraft carriers in the US Navy typically spent about 180 days at sea at a time. Over time, the aircraft carrier fleet became smaller and smaller, and for some reason the tasks did not diminish.

What the crews of the ships are doing and what tasks the command assigned to them are already two questions. And the third - how much did it all cost?

For aircraft carriers, the navy generally follows the one-third rule that governs most fleets: at any given time, one-third of ships are on patrol, one-third is preparing to patrol or just leaving, and the last third is in maintenance at the shipyard.

In emergencies, many (but not all) ships preparing to patrol may be alerted, and ships completing a patrol may delay their return. Thus, at any given time, 4 out of 11 aircraft carriers may be available for operations, and 5 or 6 in emergencies.

I just want to say: “Guys, why are you so killed? Well, you will never be killed like that! "

Aircraft carriers are sorely lacking. As part of the Eastern Fleet, there is only one operating Eisenhower, plus Lincoln on the base, the rest are under repair. In the west, they cannot deploy a Ford.

One involuntarily begins to believe that with so many breakdowns, more aircraft carriers are needed. Or really, not to get involved in an operation where an aircraft carrier is absolutely necessary. You can also save sailor Ryan with a destroyer.

Of course, there are many ships in the US Navy that are just as deadly as aircraft carriers. The same Virginias. The whole question is - against whom to fight?

When this question will be answered, then it will make sense to ask the question of how many aircraft carriers the United States really needs.

And what will all this translate into from a financial point of view.

In the meantime, it really makes sense to think about the fact that it is not worth so hard to drive such expensive ships around the world. The world did not seem to ask for this.