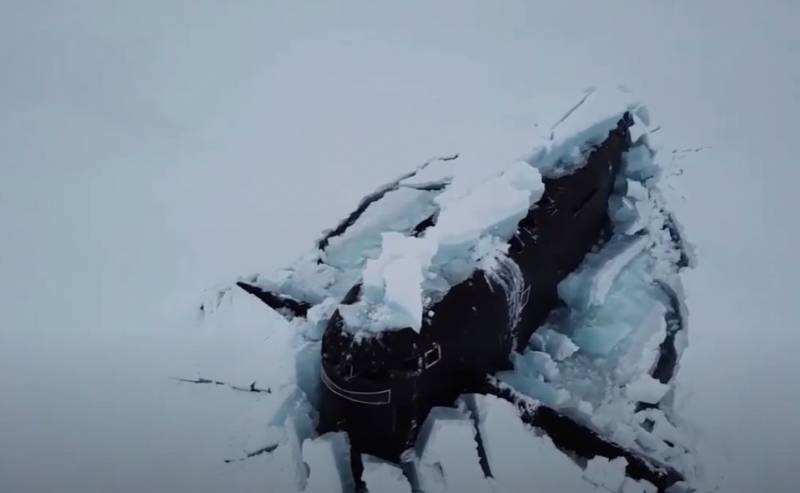 On March 20, an integrated Arctic expedition "Umka-2021" was launched in the Arctic Ocean and in the surrounding areas. During these exercises, the ships fleet, ground units and specialists of scientific organizations had to conduct several dozen different events. At the same time, only one thing attracted the greatest attention of the public and specialists - the surfacing of submarine missile carriers right on the ice field.

Expedition "Umka-2021" started on March 20. The Franz Josef Land archipelago, Alexandra Land Island and the nearest waters covered with solid ice were chosen as a testing ground for such maneuvers. The average air temperature in the area of ​​the expedition did not exceed -25 ° C. Wind gusts reached 30-32 m / s. Ice thickness - approx. 1,5 m.

The expedition was organized by the Navy and the Russian Geographical Society. The purpose of the expedition was to carry out a complex of practical and combat training, as well as research activities. Over the course of several days, it was planned to hold 43 separate events of various kinds, incl. more than a dozen scientific studies. 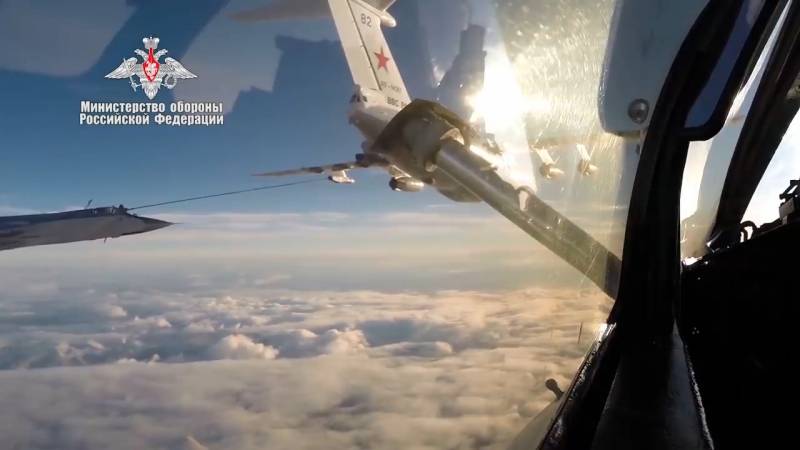 Refueling of MiG-31 interceptors to reach the North Pole
More than 2021 servicemen of different types of troops and civilian specialists took part in Umka-600. Also involved approx. 200 units weapons, military and other equipment. The expedition plan provided for the use of various equipment, from snowmobiles to strategic submarines, as well as the use of various weapons - from machine guns to torpedoes.

The Ministry of Defense notes that some of the combat training activities were carried out for the first time in domestic practice. Such novelties included the tactical exercise of the Arctic motorized rifle brigade in the conditions of the islands of the Arctic Ocean. In addition, a pair of MiG-31 interceptors flew over the North Pole for the first time, which required mid-air refueling. 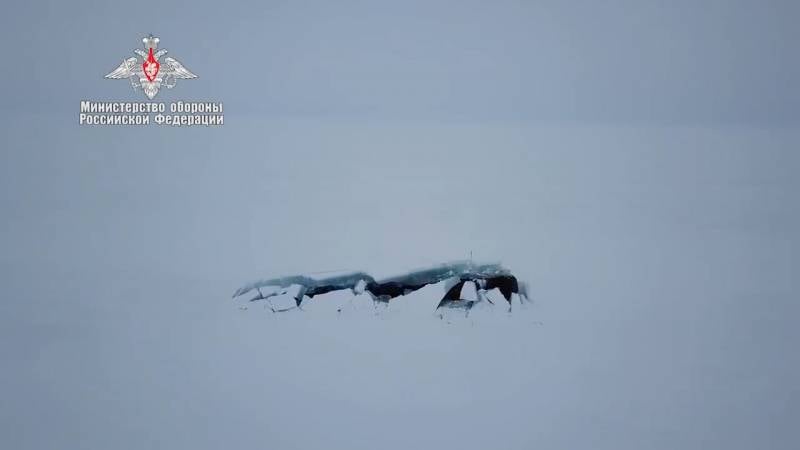 Project 667BDRM submarine breaks the ice
Such an expedition with the participation of military and civilian specialists with the solution of a wide range of various tasks was organized for the first time. In the future, it is planned to conduct new expeditions of this kind, with the help of which it will be possible to study and develop other regions of the Arctic.

The greatest interest of specialists and the public was aroused by an episode with the participation of the submarine forces of the Northern Fleet, which took place a few days ago. The navy was represented by three strategic missile submarines of two types - two nuclear submarines of the project 667BDRM and one representative of the project 955. The names of the ships are still unknown.

The submarines went to the specified area near the island. Land of Alexandra and began to fulfill the assigned tasks. One of the cruisers performed practical torpedo firing from a submerged position. Later, a hole was set up at the torpedo's ascent point, and the valuable product was lifted out of the water. 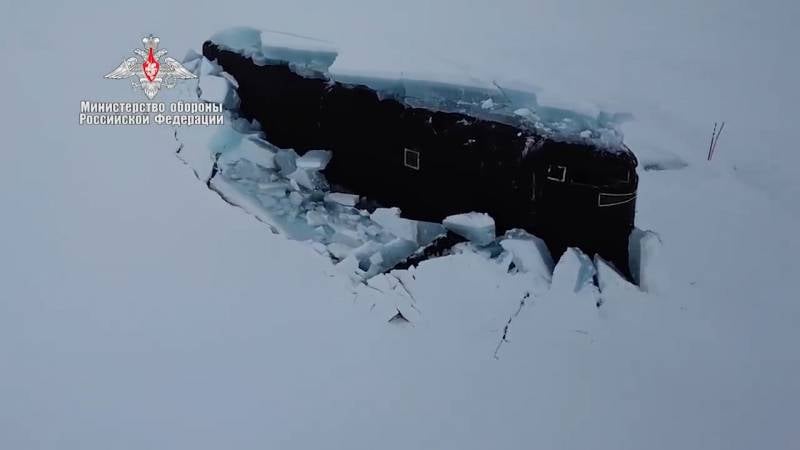 After reconnaissance of the situation and the necessary preparation, all three submarines rose to the surface, breaking through the ice cover. Competent actions of the crews allowed all three ships to surface in a limited area with a radius of only 300 m. After carrying out the following measures determined by the expedition program, the submarines made a dive and continued to move along the specified routes.

On March 26, the Ministry of Defense published a short video showing the process of submarines surfacing through the ice. A few days later, the foreign company Maxar Technologies showed a satellite image of the surfacing area. It showed all three submarines and a large hole in the ice, probably made to extract the torpedo.

Immediately after the surface of the submarines, last Friday, the command of the Navy revealed basic information about the progress of the expedition. At that time, more than 35 tasks out of the planned 43 were completed. The members of the expedition showed high proficiency and demonstrated their skills. The equipment and weapons involved confirmed the declared characteristics and the ability to work in Arctic conditions. 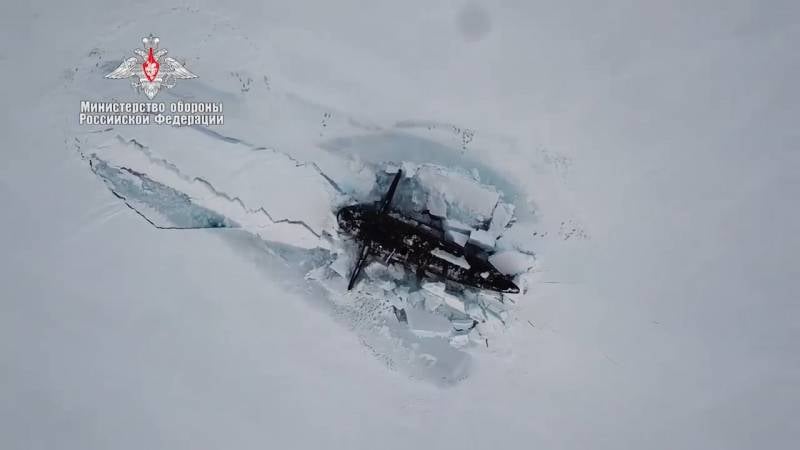 Thus, the Arctic grouping of the Russian armed forces has once again confirmed its high potential in solving a number of tasks in the difficult polar climate. The capabilities of ground units, combat aviation and submarine forces. In addition, the military helped the Russian Geographical Society with conducting research, the results of which can probably be used in the interests of the army and civilian structures.

However, in recent events, the operation for the simultaneous operation of several SSBNs under the ice with subsequent ascent to the surface is of particular importance. During this event, the special capabilities of the submarine forces were shown, suitable for use in the processes of strategic deterrence.

The Arctic Ocean is of great interest as an area for combat duty of strategic missile submarines. Thick ice reliably protects the submarine from observation and detection from the surface, from the air or from space. However, duty in this region is highly complex and dangerous. 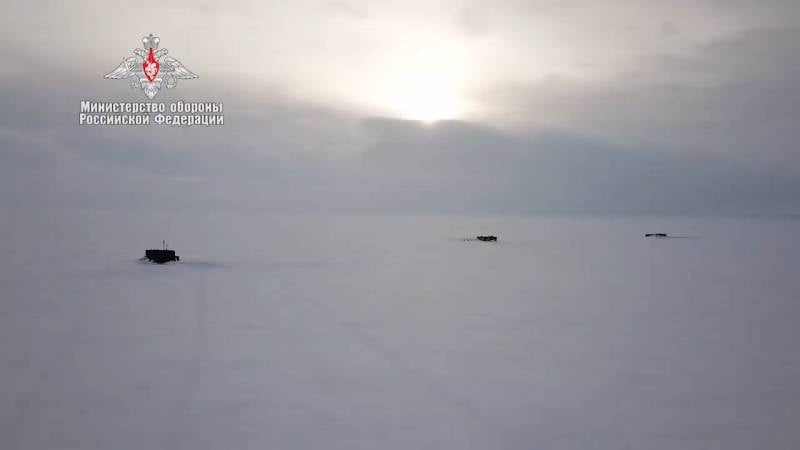 When driving under ice, navigation becomes difficult and there is no possibility of an emergency ascent. Regular ascent to the surface is a complex procedure with lengthy preparation. So, it is necessary to look for an area of ​​ice of acceptable thickness with a flat underwater surface, without large protruding elements that threaten the submarine. There are other limitations and difficulties that distinguish surfacing in ice from working in clean water.

The Arctic Ocean is beneficial as a launch site. Using existing ballistic missiles, Russian SSBNs can control a significant part of the northern hemisphere, including the entire territory of a potential enemy. In this case, the launch is likely to be sudden, which turns out to be an additional deterrent. 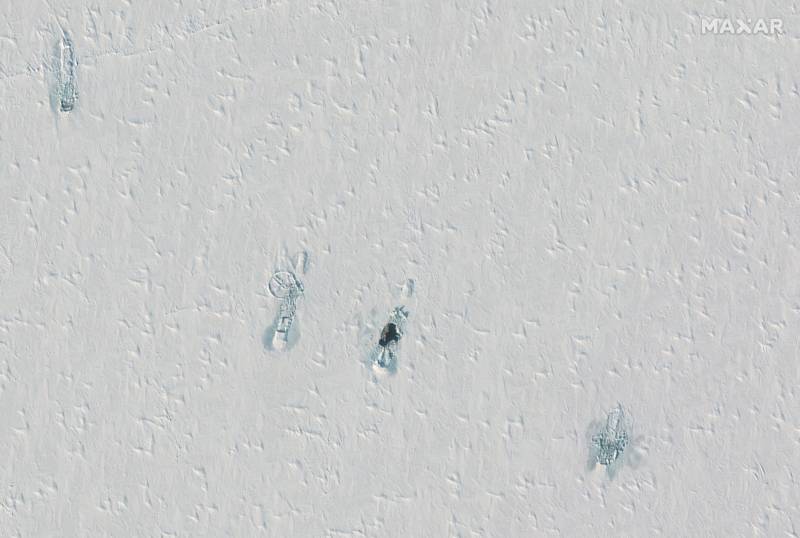 Satellite image of submarines
Thus, a few days ago, three cruisers confirmed the ability of our submarine forces to work freely in the Arctic. Strategic submarines can be on duty to contain a potential enemy, as well as carry out combat training missile launches. In addition, multipurpose submarines may be present in the Arctic Ocean, whose task is to search for and destroy enemy SSBNs.

Expedition "Umka-2021" shows the capabilities of not only individual units and combat units. Simultaneous and large-scale operation of various structures was demonstrated, in the air, on land and on ice, as well as under water. In the future, more similar exercises are expected, which are likely to re-use dissimilar forces.

It should be noted that different regions of the Arctic regularly become training grounds for conducting exercises of various types of troops. The current expedition "Umka-2021" differs from them in the scale and complexity of the tasks set. The announcement of new maneuvers of this kind allows us to expect an increase in the intensity of exercises beyond the Arctic Circle. Regular exercises of limited scope will be maintained and will now be supplemented by periodic major expeditions. 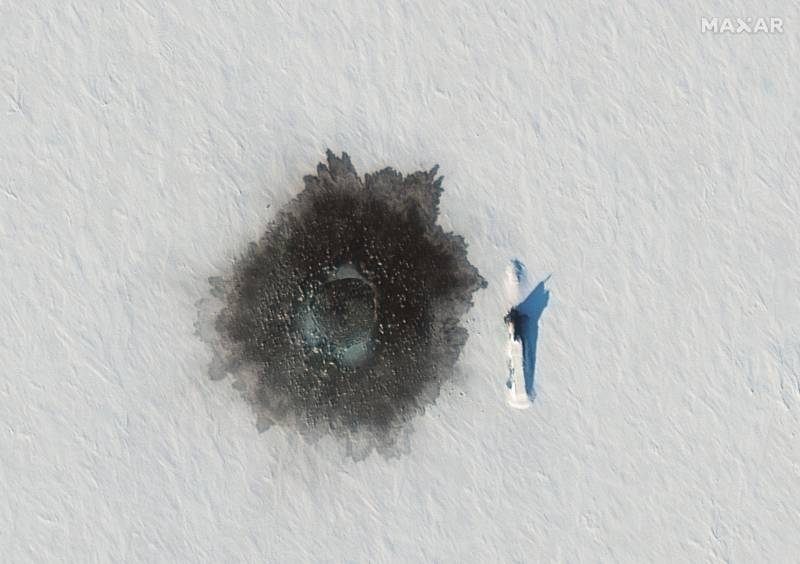 One of the cruisers and the wormwood of unknown origin
There are obvious reasons for the launch of a series of major exercise expeditions. The Arctic is of great military-political and economic interest. In the past decade, our country has been carrying out active military construction and other activities in the region in order to protect its interests. Expedition "Umka-2021" is another step in this direction, and its scale indicates the achieved capabilities of the Russian army.

Thus, the expedition of the army and the Russian Geographical Society "Umka-2021" has successfully solved a number of the most important strategic and tactical tasks. Among other things, it allowed working out a number of important procedures, showed the capabilities of the fleet and the army, and also demonstrated Russia's serious intentions regarding the Arctic. Such events are planned to be held in the future - and it is very likely that they will again contain extremely interesting and illustrative episodes.