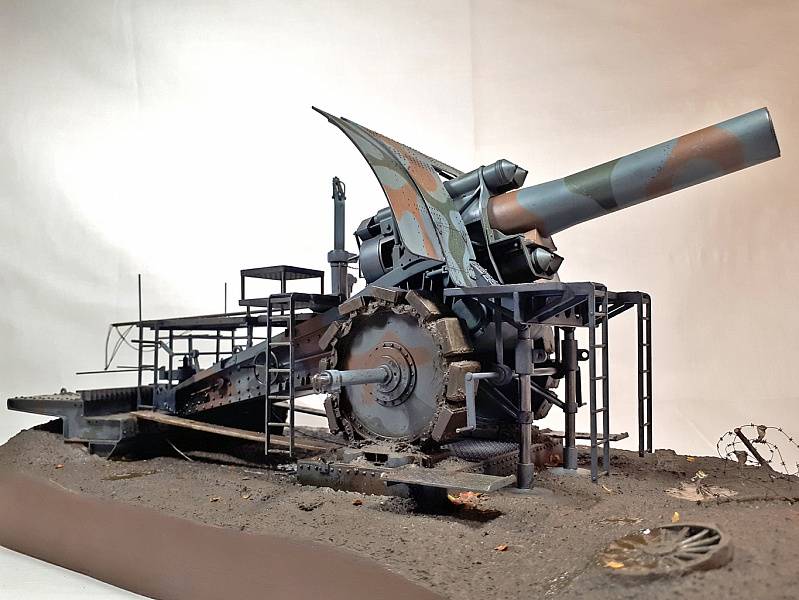 At the time of the outbreak of the First World War, German heavy artillery was one of the best in the world. In terms of the number of heavy guns, the Germans outnumbered all their opponents by an order of magnitude. Germany's superiority was both quantitative and qualitative.

By the beginning of the war, the German army had about 3500 heavy artillery barrels. The Germans retained this superiority throughout the conflict, bringing the number of heavy guns to 1918 units by 7860, brought together in 1660 batteries.

In this series of heavy guns, a special place was occupied by super-powerful artillery weapons, which rightfully include the 420-mm German mortar "Big Bertha", also known under another nickname - "Fat Bertha" (German name - Dicke Bertha). During the war, the Germans successfully used this weapon in the siege of well-fortified Belgian and French forts and fortresses. And the British and French for the destructive power and efficiency called this weapon "the killer of the forts."

The super-powerful weapon was named after the granddaughter of Alfred Krupp.

The end of the XNUMXth and the beginning of the XNUMXth centuries in Europe and around the world is a time of rapid development of industry and technology. The world was changing, so were the weapons. We can say that all the years preceding the outbreak of the First World War, the arms race was only gaining momentum, and the outbreak of the conflict only dispersed this process.

The production of a powerful 420-mm mortar by the Germans was a logical response to the fortification work, which was carried out before the war in France and Belgium. For the destruction of modern forts and fortresses, adequate weapon... The development of a super-powerful weapon was carried out in the company of Alfred Krupp. The very process of creating a mortar began in 1904 and continued for quite a long time. Development and adjustment of prototypes went on until 1912. 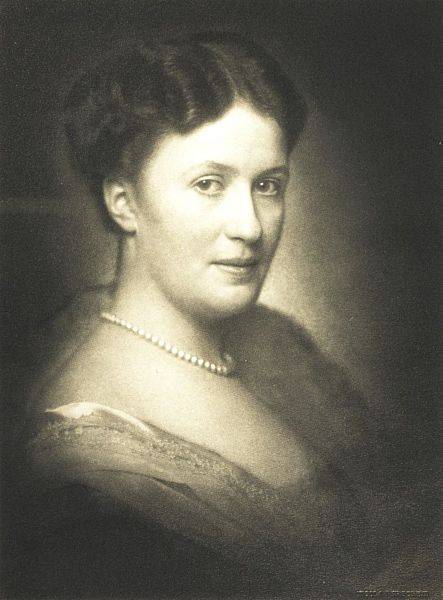 Alfred Krupp's granddaughter Bertha Krupp
The development of the 420-mm mortar was carried out directly by the chief designer of the industrial concern "Krupp" Professor Fritz Rauschenberger, who worked on the project together with his predecessor Draeger. The design and production of mortars was carried out at the Krupp Armament plant in Essen. In official documents, the guns were called "short naval guns", although it was originally planned to use them only on land. Perhaps this was done for conspiracy purposes.

According to one version, it was the tandem of developers who gave the super-powerful mortar the nickname "Big Bertha" in honor of the granddaughter of the founder of the concern Alfred Krupp, who was considered a real "cannon king" who managed to lead the company to the leaders of the German arms market for many years. At the same time, the granddaughter of Alfred Krupp, Berta Krupp, at that time was already the official and sole owner of the entire concern. This version of the name of the weapon, of course, is beautiful, but it cannot be unambiguously confirmed.

Prerequisites for the creation of "Big Bertha"

The Germans began to develop super-powerful mortars as a response to the creation by the French of a powerful system of long-term defensive fortifications on the border with Germany. The order to the Krupp company, issued at the beginning of the 300th century, assumed the creation of a weapon that could penetrate armor plates up to 305 mm thick or concrete floors up to three meters thick. XNUMX-mm shells for such tasks were not powerful enough, so the German designers predictably went to increase the caliber.

The transition to a new caliber allowed the Germans to use concrete and armor-piercing ammunition, the weight of which could reach 1200 kg. During the First World War, the name "Big Bertha" was applied to two different 420-mm artillery systems - a semi-stationary (type Gamma) and a lighter mobile version on a wheeled carriage (type M). 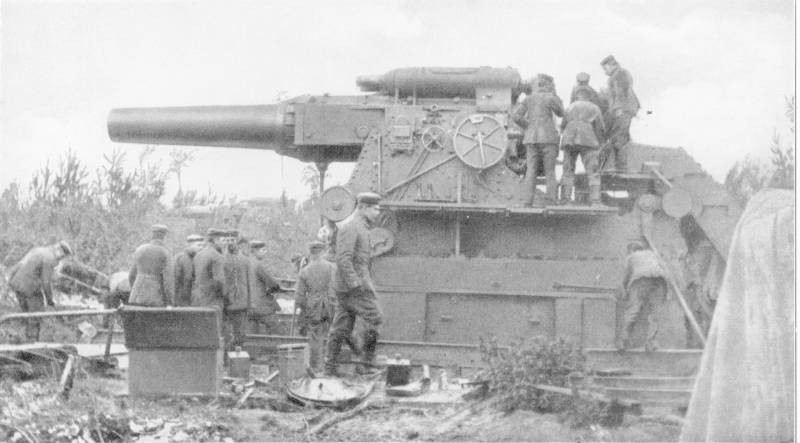 Semi-stationary version of "Big Bertha", type Gamma
On the basis of the latter system, already during the war, which acquired a positional character, the Germans created another artillery 305-mm gun with a barrel length of 30 calibers. By that time, there were practically no targets for super-powerful artillery, and the relatively small firing range was becoming an increasing obstacle.

A new model of a gun with a carriage from a Type M towed mortar received the designation Schwere Kartaune or type β-M. By the end of the war, the Germans had at least two batteries of such 305-mm guns at the front. Such guns could send shells weighing 333 kg at a distance of 16,5 kilometers.

Technical features of the guns

The first version of the "Big Bertha" was a semi-stationary version of the 420-mm mortar with a barrel length of 16 calibers. This modification was included in history as a type of Gamma. By 1912, the Kaiser's army had five such guns, five more were released during the First World War. Also, at least 18 barrels were made for them. 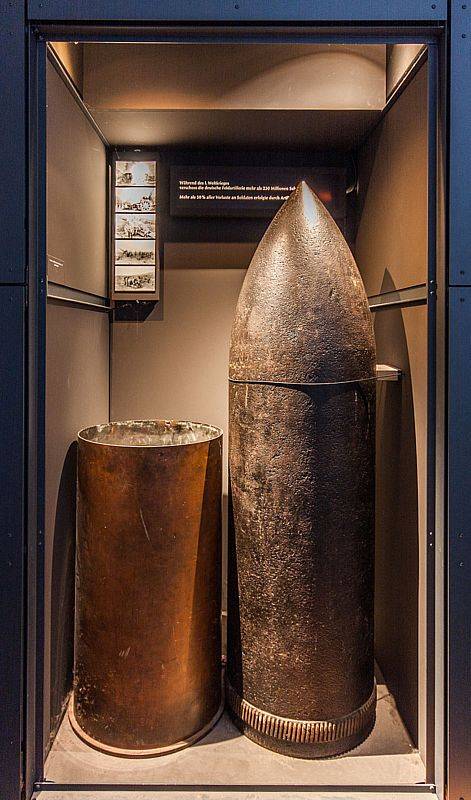 420-mm projectile "Big Bertha"
The 420-mm mortar had a 16-caliber barrel - 6,723 meters. The weight of this artillery system reached 150 tons, and the weight of the barrel alone was 22 tons. The mortar was transported only disassembled. For this, it was necessary to use 10 railway cars at once.

Upon arrival at the site, work was underway to prepare the instrument for installation. For this, a pit for the concrete base of the tool was torn off. It could take a day to dig a pit. Another week was spent on the hardening of the concrete solution, which would cope with the recoil from firing of a 420-mm mortar. When working and equipping the firing position, it was necessary to use a crane with a lifting capacity of 25 tons. At the same time, the concrete base itself weighed up to 45 tons, and another 105 tons weighed the mortar itself in a combat position.

The rate of fire of all 420 mm mortars was only 8 rounds per hour. At the same time, fire from the "Gamma" artillery system was conducted at elevation angles of the barrel from 43 to 63 degrees. In the horizontal plane, the guidance angles were ± 22,5 degrees. The main for this version of the gun could be called an 1160-kg armor-piercing projectile containing 25 kg of explosives. At a speed of 400 m / s, the maximum firing range of such an ammunition reached 12,5 kilometers.

The design of this projectile did not change during the First World War. But the high-explosive projectile, on the contrary, has been reduced. Its weight was reduced from 920 to 800 kg, and its muzzle velocity increased to 450 m / s. The maximum firing range of a high-explosive projectile increased to 14,1 kilometers (however, the mass of the explosive also decreased from 144 to 100 kg).
The semi-stationary version could be used to combat stationary objects such as fortresses and forts, for which mortars were created. But such a design also had quite obvious drawbacks - a long preparation time for firing positions and the binding of such positions to railway lines. 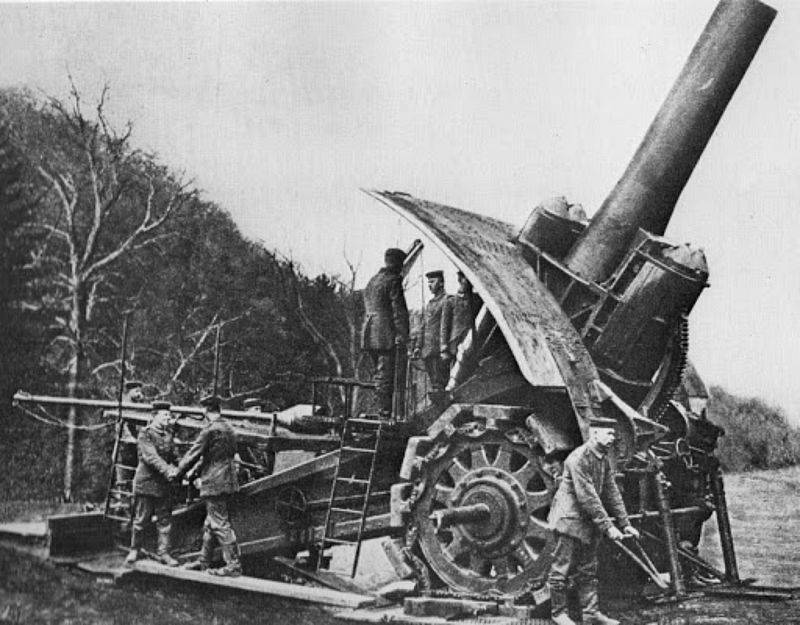 Mobile version of "Big Bertha", type M in position
Back in 1912, the military ordered the development of a smaller mobile version of the Gamma. The new version received a wheeled carriage. Already in 1913, the German military, without waiting for the completion of the development of the first gun, ordered a second sample. And in total, during the war years, 10 more such mortars were assembled, which received the designation "type M".

The weight of such a mortar was reduced to 47 tons. A distinctive feature was the reduced barrel length of only 11,9 caliber (rifled length of 9 calibers). The barrel weight decreased to 13,4 tons. In the vertical plane, the gun was guided in the range from 0 to 80 degrees, loading was carried out only with the horizontal position of the barrel. In the horizontal plane, the gun pointing angles were ± 10 degrees.

The towed gun fired high-explosive shells weighing 810 and 800 kg, which had an explosive mass of 114 and 100 kg, respectively. The speed of the projectiles was 333 m / s, the maximum firing range was up to 9300 meters. In 1917, a lightweight 400-kg armor-piercing projectile with 50 kg of explosives was developed. The muzzle velocity of such a projectile increased to 500 m / s, and the maximum firing range reached 12 meters.

The main difference between the gun was the presence of a wheeled carriage and a shield that could protect the crew from shell fragments. In order to prevent the wheels of the heavy-duty weapon from getting stuck in the ground and broken military roads, special plates were located on them, designed to reduce the pressure on the ground. The technology using special all-terrain plates Rad-guertel in 1903 was invented by the Englishman Braham Joseph Diplock. True, he believed that his invention would be in demand in agricultural technology. 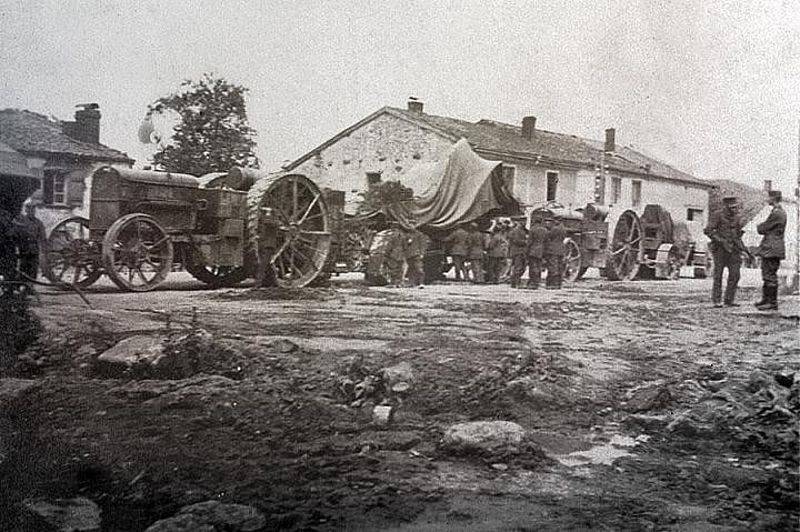 Transporting "Big Bertha" type M by Daimler tractors
For the transportation of 420-mm mortars, special tractor-tractors were created, on the creation of which the Krupp concern worked together with the Daimler company. To transport mortars and equipment necessary for the assembly, four special transport vehicles were used. Assembling the lightweight version of the mortar on the ground took up to 12 hours.

Combat use of guns

420-mm German mortars fully justified themselves in the fight against the fortresses and forts of the Belgians and the French at the first stage of the First World War. The high-explosive shell of this weapon left a crater up to 13 meters in diameter and 6 meters deep. At the same time, during the rupture, up to 15 thousand fragments were formed, which retained their lethal force at a distance of up to two kilometers. In buildings and walls, the shells of this mortar left 8-10 meter breaks.

As the experience of combat has shown, 420-mm shells pierced reinforced concrete floors up to 1,6 meters thick, and just concrete slabs up to 5,5 meters thick. A single hit to the stone structure was enough to completely destroy it. Earthen structures also quickly collapsed as a result of the impact of powerful high-explosive action. The insides of the forts - moats, glacis, parapets turned into a lunar landscape familiar to many from photographs of the First World War.

The combat debut of the Big Berts was the shelling of the Belgian fortress of Liege. To suppress the fortress, 124 guns were used at once, including two "Big Bertha" attached to the German troops in Belgium. To disable one Belgian fort, a typical garrison of which could consist of a thousand people, the guns took a day and an average of 360 shells fired. Twelve forts of the fortress of Liege were taken by the Germans in 10 days, largely due to the power of their heavy artillery. 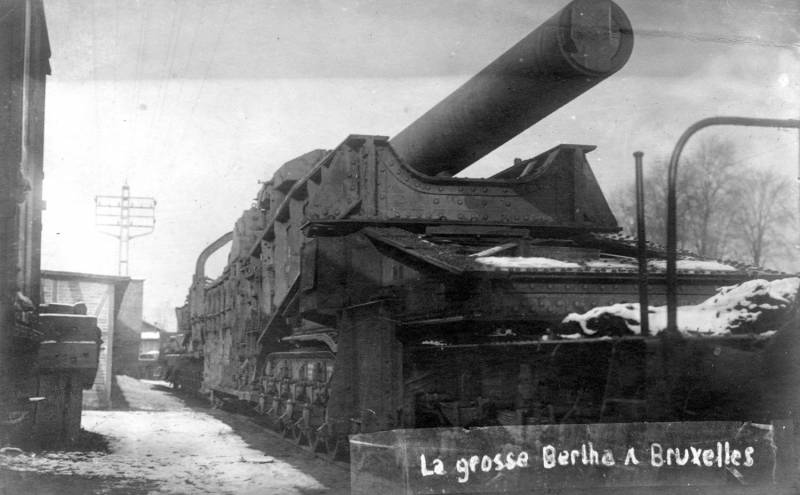 Transportation of a semi-stationary version of the "Big Bertha", type Gamma in Brussels, photo history.2014-18brussels.be
After the very first battles on the Western Front, the British and French began to call 420-mm mortars "forts killers." The Germans actively used the Big Bertha on both the Western and Eastern fronts. They were used to shell Liege, Antwerp, Maubeuge, Verdun, Osovets and Kovno.

After the end of the war, all 420-mm mortars remaining in the ranks were destroyed as part of the signed Treaty of Versailles. Miraculously, the Germans managed to save only one mortar of the "Gamma" type, which was lost at the test range of the Krupp factories. This weapon returned to service in the second half of the 1930s and was used by Nazi Germany in World War II.

The Germans used this weapon in June 1942 during the assault on Sevastopol, and then in 1944 during the suppression of the Warsaw Uprising.