The Ukrainian question in history and modernity 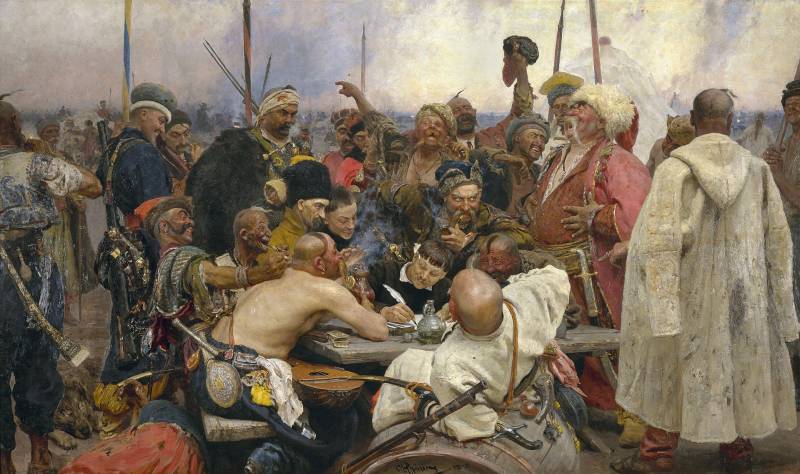 The wars subsided, the Right Bank and Volhynia were harshly bent over by the Poles with unions and other serfdom, and the Cossack state, the Hetmanate, remained on the left bank. Although it did not remain Cossack for long. And again, it's not about ordinary Cossacks, it's about the foreman - the leadership, both military and civilian. It so happened that the people in Russia were calm, but the newly formed elite was badly formed. For the elders of the Hetmanate, Moscow, with its centralized power and severely limited rights of feudal lords, was a nightmare. And Rzeczpospolita is an ideal. There the king was elected, there was a "libertum veto" (this is when one vote "against" blocked any decision in the Diet), and each tycoon had the right to complete lawlessness, absolutely disregarding the laws. And it is clear that the foreman, feeling the strength and crushing the state lands for himself, did not want order, she wanted the very Rzeczpospolita. It's good there, the right to own serfs without restrictions, the right to spit on any laws, the right to sell food to Europe for gold, regardless of local needs ... As a result, the second aspect of the Ukrainian question was the unwillingness of the newly formed elites to live in Russia, in contrast to the population - that just under the "Poles" did not want to go categorically ...

For some reason, everyone remembers Mazepa as a certain standard of a traitor. But he was just a faithful follower of the general tendency - the foreman wanted to return to the Polish-Lithuanian Commonwealth, the people interfered. Offhand - the hetmans Vygovsky, Yuri Khmelnitsky, Doroshenko, Bryukhovetsky tried to cross over ... Mazepa only continued the tradition, except that he went over to the side not of the Poles (Poland by that time had fallen into decay precisely because of its "freedoms"), but the Swedes, who were just fought with Russia. Moved for a reason, but in exchange for the right to rule the Hetmanate almost arbitrarily. It didn't work out, Mazepa fled with the Swedes and died. And Peter the Great sharply limited lovers of being magnates, taking control of power and introducing his garrisons into a number of cities. And then Catherine the Great simply liquidated the Hetmanate, for Little Russia by that time had ceased to be a frontier. The Zaporozhye Cossacks were moved to a new border, to the Kuban. She also annexed the Right Bank and mastered Novorossia, which had nothing to do with the Grand Duchy of Lithuania: before the arrival of the Russian troops there was a Wild Field, an empty land, where Tatars and Nogais occasionally roamed and the Cossacks went on raids.

The south of Russia was developing. Nobody mentioned any Ukrainians (almost no one: although the foreman received titles of nobility and serfs, she was nostalgic about Polish liberties, not even thinking - what, in fact, the Poles ended up with). Until the second half of the 1848th century, no one cared. From the second half - small groups appear, wanting the strange. But the attitude towards them is best illustrated by the reaction of the people - from 1914 to XNUMX, not a single national uprising. There were revolutionary actions, for "independence" - there were no, although the fans of this "independence" were generously financed by the Austrian Empire. Another mistake is that Galicia, lost at the beginning of the XIV century, turned out to be a part of Austria, not Russia, as a result of the divisions of the Commonwealth. The locals called themselves Rusyns, they had a strong Russian movement, supported by the Russian Empire. In response, the Austrians began to encourage the dreams of the separatists, already Little Russian, with all the ensuing consequences.

In the twentieth century

Nevertheless, by 1914, despite the permission of any agitation and propaganda of Ukrainians in the Russian Empire, it remained the lot of a small stratum of the intelligentsia, descendants of the clans of foremen and outright adventurers who dreamed of becoming the leaders of a new, far from poor country. And in 1917, their dreams came true. It is customary to blame everything on the Bolsheviks, but ... The Central Rada, which did not enjoy mass support, was recognized by the temporary. The temporary Ukrainization of the Black Sea Fleet and the Southwestern Front began. The Rada was also granted autonomy by the temporary. The Bolsheviks, on the contrary, first of all tried to slam the whole circus going on. The Brest-Litovsk Peace did not allow, but the government of the Ukrainian SSR (our answer to the UPR) was kept. In general, all sides of the Civil War had a peculiar attitude to the UPR. The Reds believed that the glad-hetmans-directories were usurpers, and that there was a legitimate Soviet Ukraine. Whites, in general, did not consider all these local separatists to be people. And the local population was much more willing to go to the atamans who fought against everyone, but for the land and against the surplus appropriation system, and not the Ukrainians. Only Germany and Austria needed Ukraine. And then - only as a cover for the annexation of fertile lands rich in metal and coal.

It all ended that way - those who like to divide and correct were crushed in between cases, and Little Russia was divided again: Volyn and Galicia went to Poland, the rest became Ukraine, but Soviet. Could it have come out differently? Probably not. There was a problem, it was being solved. Another question is that they did not solve it in the best way. And they began to build Ukrainian identity in earnest, forcing everyone to learn the Ukrainian language (the ancestors of today's Ukrainians did not speak "in language", except perhaps in the villages) and strenuously stuffing separatists with ideas. And the lands were cut not weakly. But this is understandable: the Hetmanate in historical borders were doomed to remain an agrarian hole gaping between industrial Novorossia and the RSFSR.

Comrade Stalin partly shot the lovers of Ukrainian identity and partly imprisoned them. And it was quiet again. This time until 1939, when Volyn and Galicia returned to the USSR. Volyn - okay, this is an Orthodox region that has lived in the Russian Empire for over a century and fanatically hates Poles. But Galicia with its separate language, Uniate religion, terrorism (Bandera and emerged as a terrorist organization against the Poles and based on German Nazism) was clearly superfluous. Taking an openly hostile region was at least stupid. But Joseph Stalin jumped on the rake of Nicholas II, who also tried to annex these lands. In the war, the Ukrainian SSR fought no worse and no better than others. Exceptions are Volyn and Galicia. In the first, the Bandera members slaughtered the Poles, in the second, they actively collaborated with the Nazis in order to slaughter, in general, everyone and build the land from ocean to ocean (at least to the Don).

True, after the end of the war, the Banderaites were transferred (the "bloody regime" of the USSR, instead of executions and eternal exile to relatives, as the French or the British would do, gave 10 years to those caught with weapons, and even announced amnesty time after time). Peace reigned again. The best indicator of the authority of Ukrainians is that as soon as parents were allowed to choose the language of instruction for their children, the number of Ukrainian schools dropped sharply. Even in the order of the Ukrainianized Volyn - every fourth school in the cities became Russian. The people for the most part did not want any land. However, as in all previous eras.

Yes, the people didn’t want to. But, as in the Hetmanate, the elite wanted. All these regional committee secretaries, republican ministers and other academicians who received titles for justifying a certain separate Ukraine, slept and saw themselves as ministers, deputies, oligarchs ... While the USSR was stable, they sat quietly. But this is for now. External adversaries also wanted to separate Ukraine. Their calculation was simple: without Ukraine, Russia can be rich and strong, but it cannot be self-sufficient and great. 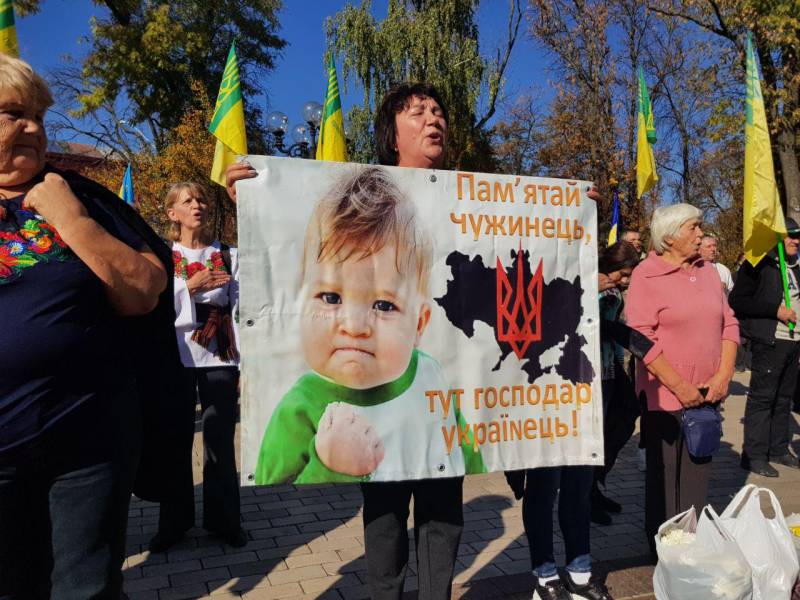 The events of 1991 were logical: the control of the center weakened. And the regional elites rushed in all directions. And not because of patriotism, not because of Ukrainianship, but for pragmatic reasons - your state allows you to steal more. And, having separated, the rest had to be done simply for objective reasons - Russophobia is needed in order to explain to the amazed people why a brother living in Kursk is now a "damned Muscovite" and a foreigner. And why the factories stop one after the other, and some of the accounts in London have stepped over a billion dollars. And the generations who grew up on the myths of the Russophobic sense will look for a way out even further from Moscow. Which actually happened in 2004 and 2014. And the last time it all ended in a huge tragedy and a war that continues to this day. And from which Russia is trying to distance itself, which is deliberately doomed to failure.

The current Ukrainian question is at least a question of protecting our own people. And there are at least twenty million Russians there (those who consider themselves to be such). The issue of security, because the aggressive "Somalia" on the border is potentially dangerous. Especially considering that its population is being actively brainwashed and actively pumped with weapons. The issue of Crimea and Donbass, which have to be defended, the latter being as ineffective as possible with an endless, sluggish war. And the question of the economy: to lose these lands and resources forever is at least stupid. And there are no simple solutions for southern Russia, everything is too neglected and too much has been done wrong. 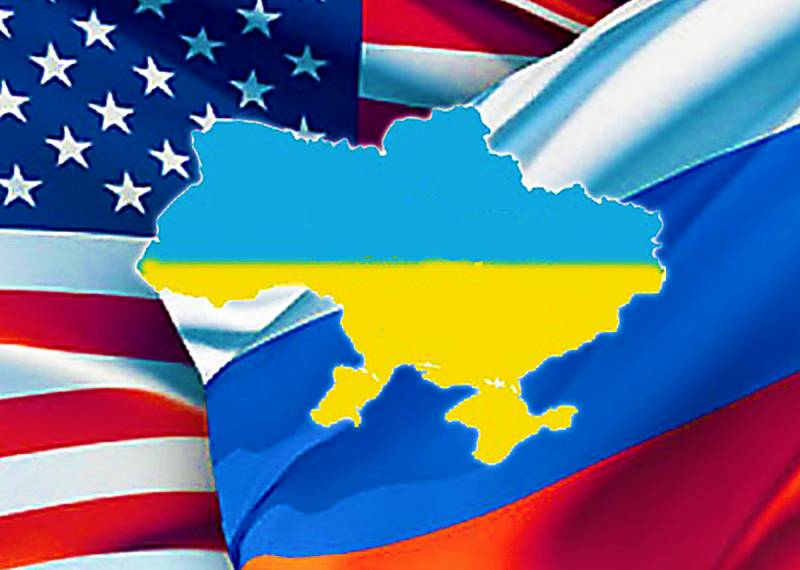 Source: inform-ua.info
And now there is a frontier again. And again the southern front against Russia. And no matter how much you close your eyes, there is no escape from this.