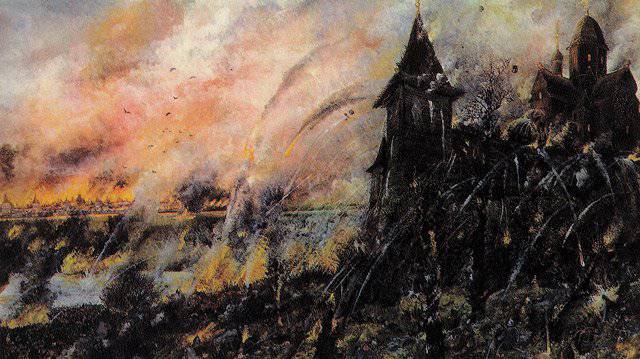 26 August 1382. Khan Tokhtamysh’s troops burned down Moscow. After that, the Tatar troops captured Vladimir, Pereyaslavl, Yuriev, Zvenigorod, Mozhaisk and other Russian cities, laying tribute to them. The campaign of 1382 of the year was aimed at the restoration of the power of the Golden Horde “tsar” over Vladimir-Moscow Rus, which, after the Battle of Kulikovo of 1380, gained independence.

Tokhtamysh was one of the descendants of the Juchi clan, the eldest son of Genghis Khan. His father was Tuy-Khoji oglan, the ruler of Mangyshlak (a peninsula on the eastern coast of the Caspian Sea), an influential prince under Khan Urus. After the father of Tokhtamysh was executed by order of the khan for disobedience, the young prince, saving his life, fled to the Samarkand ruler Timur (Tamerlan) in 1376. A year later, he, with the support of the troops of the ruler of Maverannahr (historical region in Central Asia, the land between the rivers Amu Darya and Syr Darya), began to conquer the Golden Horde.

His position was facilitated by the fact that the Golden Horde was weakened during the period of distemper. Tokhtamysh suffered several defeats from the troops of Urus, but Timur continued to support him, singling out new troops. After the death of Urus, Tokhtamysh was able to defeat Timur-Melik and became the ruler of the White Horde (eastern part of the Juchi ulus) with the center in Sygnak. In 1378, Tokhtamysh began a war with Mamai, who controlled the western part of the Golden Horde. The Kulikov battle, where Mamai lost his main forces, finally outweighed the balance in favor of Tokhtamysh. Mamai was able to gather another army, but when meeting with the enemy forces on the river. Kalka his Murza went over to the side of Tokhtamysh, who was “of royal blood”. Mamai fled with treasure to the Crimea, where he was killed by former Allies - the Italians. The prince seized the land of Mamaia up to Azov, including the capital of the Golden Horde, Sarai-Berke, and occupied the royal throne. It was Tohtamysh's finest hour, he united under his rule the Juchi Ulus.

Having headed the Golden Horde, Tokhtamysh naturally wanted to restore power over Northeast Rus. Khan sent ambassadors to the Moscow Grand Prince Dmitry Ivanovich and other Russian princes with the news of his victory over the enemy of Russia Mamai, as well as his reign in the Golden Horde. Moscow was informed that Tsar Tokhtamysh was grateful to Prince Dmitry for defeating Mamaia on the Kulikovo Field, since the Russian soldiers had defeated not the Khan of the Golden Horde, but Temnik, the usurper of the Khan's power. Now, when the legitimate king came to power in the Golden Horde, from the Chingizids family, Russia must pay tribute in the old days, for which Tokhtamysh promised Dmitry Ivanovich his mercy and protection from enemies (Lithuania). The Grand Duke greeted the Tatar ambassadors affably, bestowed upon them, sent gifts to Khan, but sovereign Dmitri deviated from the tribute ("exit") and humility.

In the summer of 1381, another Tatar embassy led by Ak-Khozu was sent to Russia. However, the ambassadors arrived only to Nizhny Novgorod, apparently, there the Tatars received news that Dmitry was not in the mood to pay tribute and returned to the Horde. Then Tokhtamysh decided to use military force. His decision was approved and the denunciation received from the Suzdal princes Vasily and Semen. Dmitry invited Metropolitan Cyprian of Kiev to Moscow. The Suzdal princes presented this step as a conspiracy of Moscow with Lithuania, the ally of its enemy - Mamaia.

Tokhtamysh raised an army, and in the summer of 1382, he occupied the lands of Volga Bulgaria. Russian merchants, in order to prevent information leaks, were killed or arrested, their vessels and goods confiscated. Tokhtamysh crossed the Volga and, taking the Suzdal princes as guides, set off on a march with “exile,” that is, without carts. Tatar army bypassed the Ryazan land from the south-east and went to Oka. Some researchers believe that Prince Oleg Ryazansky pointed out fords to Okhtamysh through Oka.

The news of the approach of the enemy troops, it was received "from some of the well-wishing, living within the Tatar", caught the Moscow government by surprise. Dmitri Ivanovich led the forces in possession (and his troops suffered huge losses on the Kulikovo field) towards the Horde. However, without receiving support from other princes, seeing the weakness of the existing forces and the lack of unity, he went north to Kostroma in order to assemble a stronger army. His cousin Prince Serpukhov and Borovsky Vladimir Andreevich went to Volok Lamsky. Moscow and his family, the Grand Duke entrusted Metropolitan Cyprian. Apparently, Dmitry Donskoy was convinced that the new stone walls of the city built in 1367 were unapproachable. In addition, the fortifications were equipped with long-range crossbows and "mattresses" (urban artillery). Light Horde cavalry was not able to take such a first-class fortress. The city possessed sufficient food supplies to withstand a possible siege.

The problem was different, the Grand Duke overestimated the managerial qualities of Cyprian, did not leave an experienced governor in the city. There were not enough defenders and the strength of the military spirit - the few professional squad left with the prince, the warriors who had won the Kulikovo field were dispersed home. Few boyars with servants and Moscow artisans remained in the city. This mass was not inclined to military discipline, order and long military operations. A penchant for self-will, arrogance, irresponsibility dominated their minds.

Cyprian did not organize the defense and began to prepare for departure. Riots began in the city, some wanted to close the gates and keep the defense, others immediately leave the city, and skirmishes began between them. At the meeting, it was decided not to let anyone out of the city. The “Defenders” defeated the boyar cellars with wine and honey, the general drunkenness and robbery began. The townspeople could not even fulfill the decision of the veche - Metropolitan Cyprian and the Grand Duchess were released from Moscow, however, they looted their luggage beforehand. Princess Evdokia and her family went to visit Kostroma with her husband, and Vladyka Cyprian to Tver.

The temporary defense of the city was attempted by the Lithuanian prince, the grandson of Olgerd Ostei, who was in the Russian service. Researchers do not know whose son was Ostey. Perhaps Ostey was the son of one of the two Olgerdovich brothers, the sons of the famous Olgerd, the son of Gedimin - Andrei and Dmitry, the heroes of the battle on the Kulikovo Field. He was able to pacify the rioters, encourage the doubters, appointed commanders to the militia detachments. Under his leadership, the Muscovites were able to burn out the suburbs and prepare the walls for defense, prepared stones, tar, tar. Each defender was assigned his place on the wall.

The army of Tokhtamysh, crossing the Oka River, captured Serpukhov and headed for Moscow, "the townships and villages burn and fight, and the Christian race slanted and killed, and other people were completely full." 23 August advanced forces of Tokhtamysh's troops approached Moscow. The city was not blocked, the Tatar hundreds only circled around the city, robbing villages. Several Tatars approached the walls and they asked the defenders if Prince Dmitry Ivanovich was in the city. Having received a negative answer, the Tatars began to carry out reconnaissance. Muscovites insulted and mocked them.

On the morning of August 24, the main forces of Tokhtamysh went out to the walls. After the shootout, the Tatars went to storm the city, hoping to take the city in stride, taking advantage of the absence of the Grand Duke and his forces. However, the townspeople repulsed all attacks with great damage to the attackers. Horde was fired from "mattresses", crossbows, poured boiling water and resin. The walls, with a sufficient number of defenders and protective equipment, were impregnable. 25 August the enemy went to the second assault, but he was repelled.

The army of Tokhtamysh suffered significant losses and could not waste time on the siege, at this moment princes Dmitry and Vladimir Serpukhovsky gathered troops, peasants gathered in troops and attacked the enemy, the situation changed every day not in favor of the Tatar troops. Tokhtamysh decided to use a military trick. 26 August through the Suzdal princes, they were siblings to the wife of the Moscow Grand Duke, Grand Duchess Evdokia, he offered the townspeople an honorable peace, on condition that they let the Tatar embassy into Moscow. Believing the enemy and the traitors was very stupid, but the drunken crowd (the townspeople had been drunk for several days) accepted the condition of Tokhtamysh. Princes Basil Kirdyapa and Simon swore an oath on the cross.

The Tatar embassy came to meet the Prince of Osteys, the clergy, noble and simple people. Gate protection is not provided. The Tatar embassy penetrated into the city, and the rest of the enemy army rushed after it, the slaughter began. The first was slaughtered prince Ostey. Priests and other people began to cut him down. The townspeople were taken by surprise and could not organize resistance, there was a massacre and plunder throughout the city. Tatars captured the grand duke's treasury, a huge number of values, the city burned out. The entire population was slaughtered, burned, or gone into full. Upon further calculation, it turned out that only the dead citizens - about 24 thousand people. When the Grand Duke of Moscow and Vladimir Dmitri Ivanovich returned to Moscow, he saw only "smoke, ashes, bloody land, corpses and empty charred churches."

To capture more mining and people Tokhtamysh scattered his troops on the Russian land. Tatar troops ravaged Vladimir, Zvenigorod, Mozhaisk, Yuriev and Pereyaslavl. He forbade to touch the land of Tver, so there flowed a stream of refugees. A part of Tokhtamysh's army approached Voloka Lamsky, where the hero of the Kulikovo battle, Vladimir Andreevich Khrabry, was located. The Russian army under his command attacked and utterly smashed the enemy forces, many of the Tatars were captured. It was enough that Tokhtamysh hastily assembled troops and left the borders of the Russian land. On the way back, the army of Tokhtamysh destroyed Kolomna and the Ryazan land. Tohtamysh returned to the Horde with huge booty and full, having strengthened his power even more.

The Grand Duke of Moscow, Dmitry Ivanovich, began to restore the ruined settlements. In the autumn, the Tatar embassy arrived in Moscow with a proposal for peace. In the spring of 1383, Tsar Dmitry sent his eldest son Vasily to the Horde as a hostage. Tokhtamysh gave a label to the Great Reign of Dmitri Ivanovich, although Mikhail Tverskoy asked himself to do it. Moscow-Vladimir Russia was again forced to pay tribute to the Golden Horde kings and perform military service (send Russian squads to the aid of the Horde). The victory over Moscow did not bring good luck to Tokhtamysh - he began to fight with his patron Timur and was defeated in it.