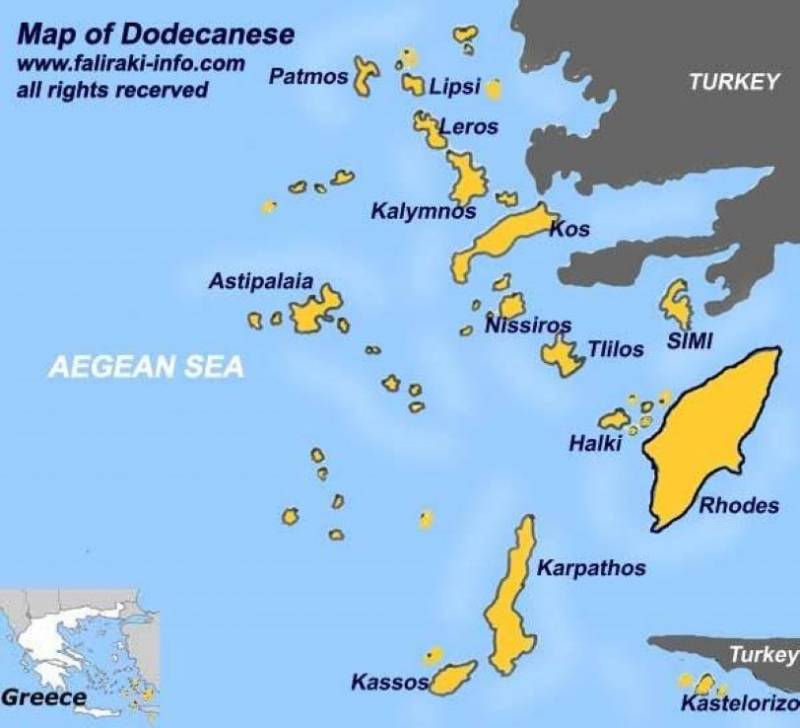 The limits of the possible

The uprising ended in 1829 with the Ottoman Empire granting broad autonomy to Greece. This was, we recall, one of the conditions of the Russian-Turkish Adrianople peace treaty. Already in 1830, Turkey, under pressure from Russia, was forced to grant independence to Greece (see. How Russia helped create Greek independence).

Since the early 1830s, the territory of independent Greece was no more than a quarter of its present territory. Greece reached its current borders only by the end of the 1940s - again, not without assistance from the Russian Empire and the USSR. 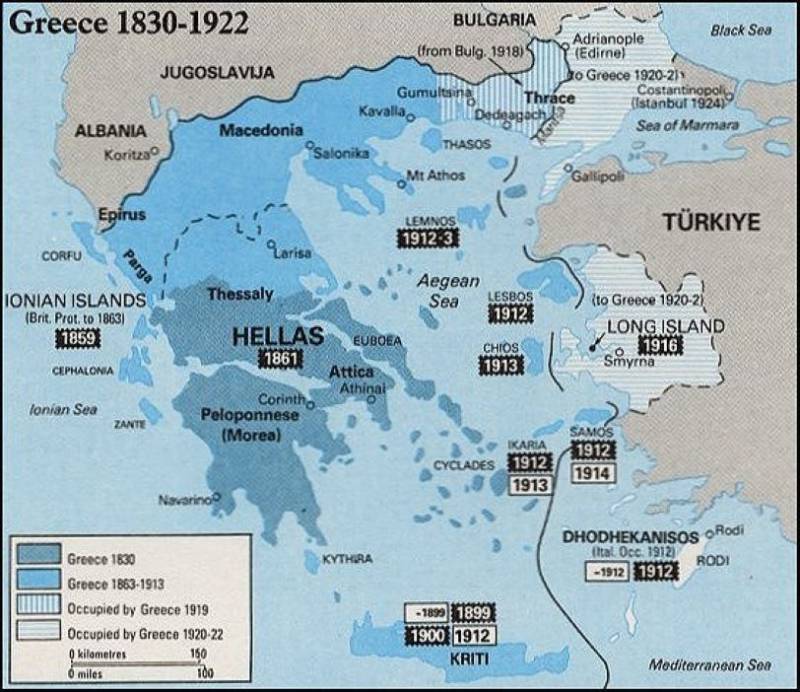 The final chord in the formation of these borders was the reunification of Greece in 1947 with the Dodecanese archipelago in the southeast of the Aegean Sea. These are the Greek islands of the Southern Sporades with an area of ​​2760 sq. km and about 5 thousand sq. km along with the adjacent water area.

While helping with the Dodecanese, the Soviet leadership at the same time made Greece renounce its territorial claims to the southern region of Albania, which already in 1945 had become an ideological and military-political ally of the USSR.

As a result of the Second World War, Albania ceased to be a semi-colony of Italy. Recall: Italy, having defeated Turkey in the war of 1911-1912, seized from her not only Libya, but also the Dodecanese Islands with adjoining waters in the southeast of the Aegean Sea.

The fact that these islands have long been dominated by the Greek population did not bother the Italians. It is interesting that already at the beginning of the 60s of the last century, the share of Greeks in the population of the archipelago reached almost 100%.

After the capitulation of the Porta in World War I, Italy, despite the demands of Athens, refused to transfer the archipelago to Greece. The Entente, which included Italy, did not hide the desire to control the entire route between the Black Sea and the Mediterranean basin.

However, Greece's claims to the Dodecanese have not gone anywhere. In the fall of 1944, British troops captured these islands, with the expectation of transferring them under the "temporary" care of Great Britain - as they did in 1944-1951. with ex-Italian Eritrea on the Red Sea coast.

But the German garrison on the main island of the archipelago - Rhodes - capitulated only on May 8, 1945. And neutral Turkey, as a reward for non-interference in the war on the side of the Third Reich, began to demand the "return" of this archipelago, but London refused.

Do we need a Turkish coast?

At the same time, the position of the USSR, which, much to the confusion of the allies, did not demand the straits, was that these islands should be transferred to Greece. Not only as a member of the anti-fascist coalition, but also as a country that experienced two Italian aggression: in November 1940 and coupled with the Nazi invasion in April-May 1941.

Since March 31, 1947, the administration of His Majesty King Paul I of Greece first began to rule the archipelago. But the British delayed the transfer of sovereignty to Athens, trying to gain a foothold in the southern part of the Mediterranean Straits route.

However, London was forced to yield, taking into account the position of the USSR on the archipelago and the signing of a peace treaty with Italy on February 10, 1947: from September 15, the sovereignty of Greece was declared on the islands. 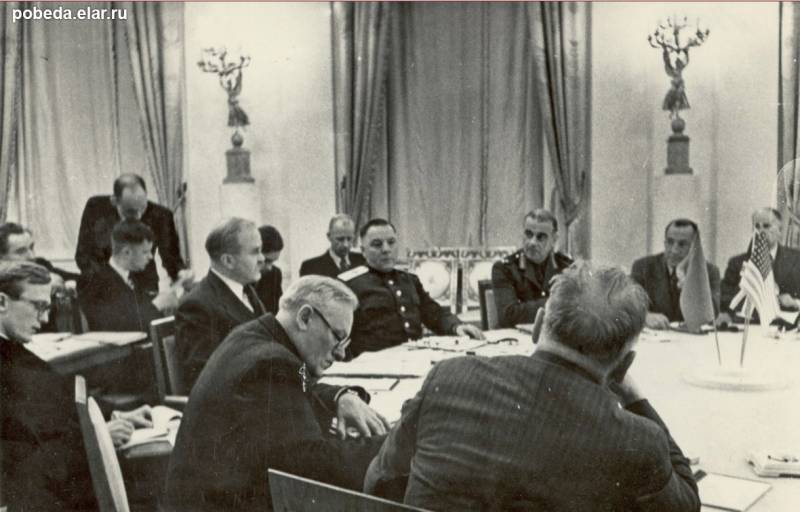 Meanwhile, back in January 10, 1944, in a letter to the Deputy People's Commissar for Foreign Affairs of the USSR I.M. Maisky about the post-war system in Europe, it was noted that

"Greece must be restored within the 1940 borders and, moreover, the Dodecanese must be handed over to Greece."
Which was supported in London and Washington.

We need a base on the Bosphorus

To demand the straits from a non-warring Turkey in 1945 would be too much. Not only was the USSR friendly with this country during all the interwar years, the propaganda effect could be very unpleasant - they say that Stalin's Russia is following the path of the Romanovs' Russia.

But the failure with the post-war project to obtain a naval base on the Bosphorus was not so expected (see. Khrushchev, Constantinople and the Straits). And therefore, Moscow decided to link the ownership of the archipelago with the presentation of the base there by the USSR, at least for the trade fleet.

At the session of the Council of Ministers of Foreign Affairs (CFM) of the USSR, Great Britain, the USA and France on September 14-17, 1945 in Moscow, People's Commissar for Foreign Affairs V.M. Molotov stated that,

"By supporting the transfer of the archipelago to Athens, this area is of strategic interest to the USSR due to its proximity to the entrance to the Black Sea" (see FRUS, 1945, vol. 2).
This position of Moscow was connected with the fact that British troops remained in Greece since the spring of 1945. From where, under pressure from the United States, they were evacuated in February-March 1947. In the memorandum of the head of the British Foreign Office E. Bevin to the USSR delegation at the Ministerial Council on September 19, 1945, it was assumed that:

after the Greek elections, if "a more compliant government comes to power, it is possible that Athens will agree to the deployment of a Soviet base as a" price "for the transfer of the Dodecanese Islands."
The Soviet People's Commissar reminded the Allied diplomats that:

“During the First World War, the British government promised to transfer Constantinople to Russia. Now the Soviet government does not pretend to do this. " Moreover: "Can't the Soviet Union have a" corner "in the Mediterranean for its merchant fleet?"
As General Charles de Gaulle later noted,

"At these words, the British and Americans took their breath ... and the Italian question almost completely reached a dead end."

Another truth about Greece

And in the "Directives for the Soviet Delegation at the Meeting of Deputies in the Council of Foreign Ministers in London", approved on January 7, 1946, the Politburo ordered:

“To ensure that in preliminary negotiations with the Greeks it was stipulated that consent to the transfer of the Dodecanese islands could be given if the USSR was granted a base for merchant ships on a lease basis on one of the Dodecanese islands” (RGASPI, f. 17, op. 162, d. 38).
Meanwhile, Admiral K. Rodionov, the then USSR ambassador to Greece, in talks with Greek Prime Minister F. Sofulis on February 18, 1946, noted that the Soviet merchant shipping company

"Could lease a site in one of the Dodecanese islands to create / lease a base for merchant ships."
This step "would have a beneficial effect on the restoration of the Greek-Soviet trade and the solution of the issue of the Dodecanese." But Sofulis declined to answer, saying that

"He cannot express his opinion on the question raised before the parliamentary elections in Greece at the end of March."
The victory in the March 31 elections by the extreme right - the People's Party - ruled out negotiations on such a base in the Dodecanese.

“Such negotiations became impossible in connection, recall, with the war in Greece between the communists and government troops in 1946-1949. In it, the latter received military and technical assistance from London (until the spring of 1947), and then from Washington. As a result, the communist troops surrendered "(see" The Truth About Greece ", Moscow, foreign literature publishing house, 1949; AVP RF, f. 084, op. 34, p. 139, d. 8).

Due to the factors mentioned, at a meeting of the Council of Foreign Ministers in Paris in June 1946, Molotov stated that

"The Soviet delegation has no objection to the transfer of the Dodecanese to Greece."
But the delegation of the USSR in return demanded from the ex-allies, including Greece, guarantees of the inviolability of the borders of Albania. Greece has long claimed its southern region - Chameria and the nearby large port of Vlore (Greek "Northern Epirus").

By that time, a pro-Soviet communist regime had established itself in Albania, which had obvious strategic benefits for the USSR in the Balkans and the Mediterranean. Until the early 60s, it was in Vlore that the only Soviet naval base in the Mediterranean was located. 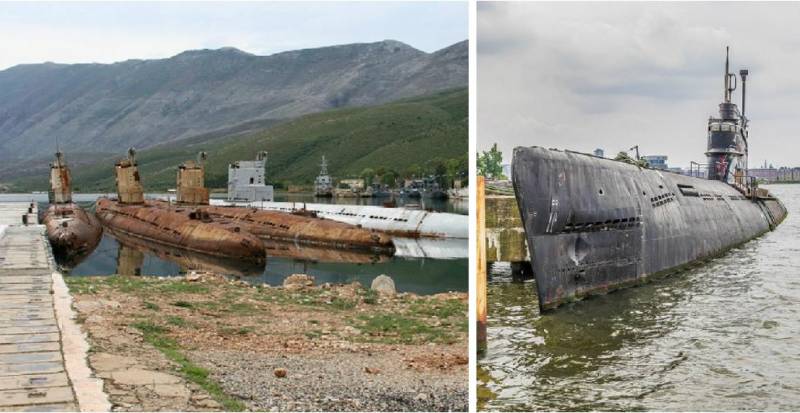 Now no one needs submarines in Albanian Vlora
In view of the growing importance of Greece to the West, London and Washington agreed to Moscow's demand and "persuaded" Athens to actually renounce its claims to Albanian Chameria. This became a fact in mid-November 1947 after a government statement addressed to the government of Albania.

Vyacheslav Mikhailovich Molotov, who put together "Documents and materials on the foreign policy of the USSR" (Moscow, Gospolitizdat, 1949; AWP RF, f. 0431 / II, op. 2, p. 10, d. 40), noted that only two months after the proclamation of Greek sovereignty in the Dodecanese, however, Greece legally abandoned those claims only in 1972.

Finally, it was only in 1987 that the country announced the end of the state of war with Albania.

The USSR was able to strengthen the security of this country and strengthen its position in the Balkans, skillfully using the demand of Athens to annex the Dodecanese.

Ctrl Enter
Noticed oshЫbku Highlight text and press. Ctrl + Enter
We are
Chernobyl notebook. Part of 3Enver Hoxha is the last Stalinist in Europe. Part of 2. The leader of a self-sufficient country
Military Reviewin Yandex News
Military Reviewin Google News
85 comments
Information
Dear reader, to leave comments on the publication, you must sign in.