The emergence of the Ukrainian question 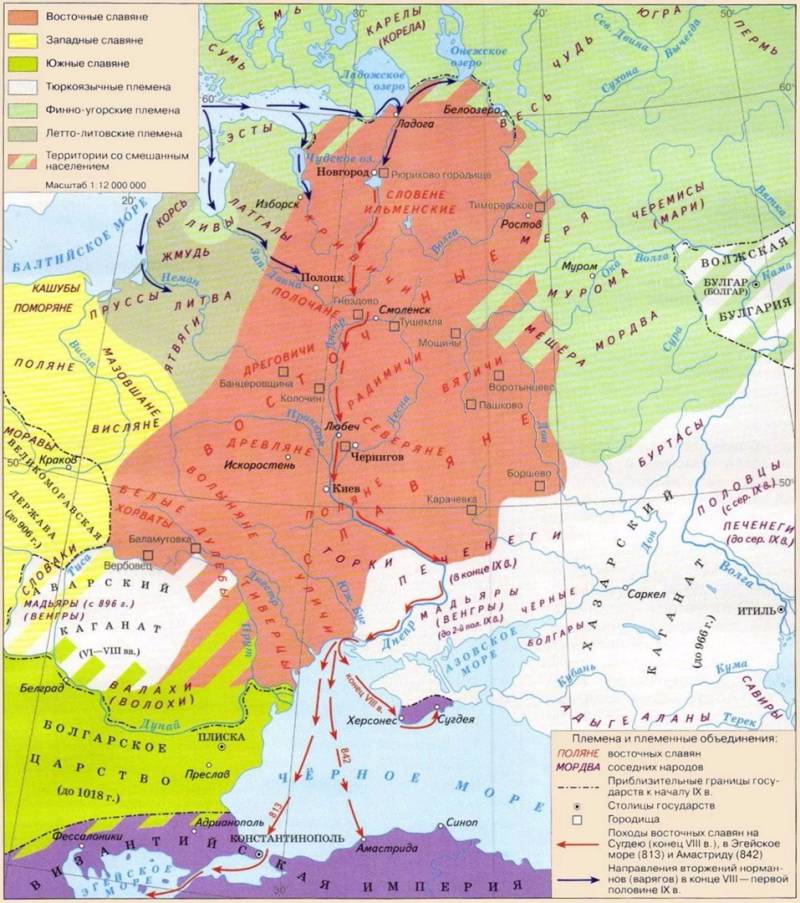 At the dawn of the Russian stories there were no, strictly speaking, Russians, Ukrainians and Belarusians, and any textbook will tell you about tribal unions, like the Volynians or Vyatichi, about the beginning of the formation of their statehood. And about the Varangians, they are Vikings, they are normal. It was from these elements that the Russian state was formed. And this happened for objective reasons: both internal - the Slavic tribes in their numbers and development had already reached a certain level, and external - the path from the Varangians to the Greeks flourished.

In the end it turned out what happened. And the Norman Oleg, the prince of Slovenia, captures Kiev - the capital of the glades. And creates a single state. Later, almost all Slavic tribes begin to pay tribute to Kiev, where Oleg moved his capital. In 988, Russia adopted Christianity, under Yaroslav it became one of the strongest states in Europe. But, again, no Russia, no Ukraine, no Belarus.

In 1132, Ancient Russia disintegrated completely. But, again, it is stupid to look for the national here. Ordinary feudalism. Talks about nations in relation to the inhabitants of Smolensk or Kolomna are drawn only to delirium. The people understood this. The residents of both Novgorod and Galich considered themselves to be Russia in the same way, and the princes of the "sovereign" were all relatives, moreover, their neighbors. A single church, language, culture remained. In 1187, however, the word "Ukraine" is mentioned, but how

"There is a lot of poston about him in Ukraine"
and in the context of the Pereyaslavl principality, which was "Ukraine", in the sense of a frontier - the border between Russia and the steppe, on which the war never stopped.

The name is fair. And then, and after 850 years, Ukraine remains the frontier. The steppe was replaced by the Ottomans, the Ottomans - by the West. But this land plays the role of a battlefield between us and them, that is, those for whom we are a resource. The Mongol invasion and the Golden Horde, in fact, did not change anything. Is that at the beginning of the XIV century the Galician principality went to Poland and was lost for Russia forever, and Volyn - to the Grand Duchy of Lithuania, also Rus, but led by the Gediminovichs.

It so happened that Russia was slowly and surely rebuilding as a whole from two centers: one of them was Moscow, the second - Vilna. To modern Lithuania, that principality has nothing to do with that which occupied it, and the present Lithuanians are the descendants of Zhmudi, but this is so, by the way. The phenomenon is, in general, common: two centers fought for state unity. Many in Europe experienced this, but in our country it ended in a draw, which was the beginning of the split of the Russians, at first imperceptible. 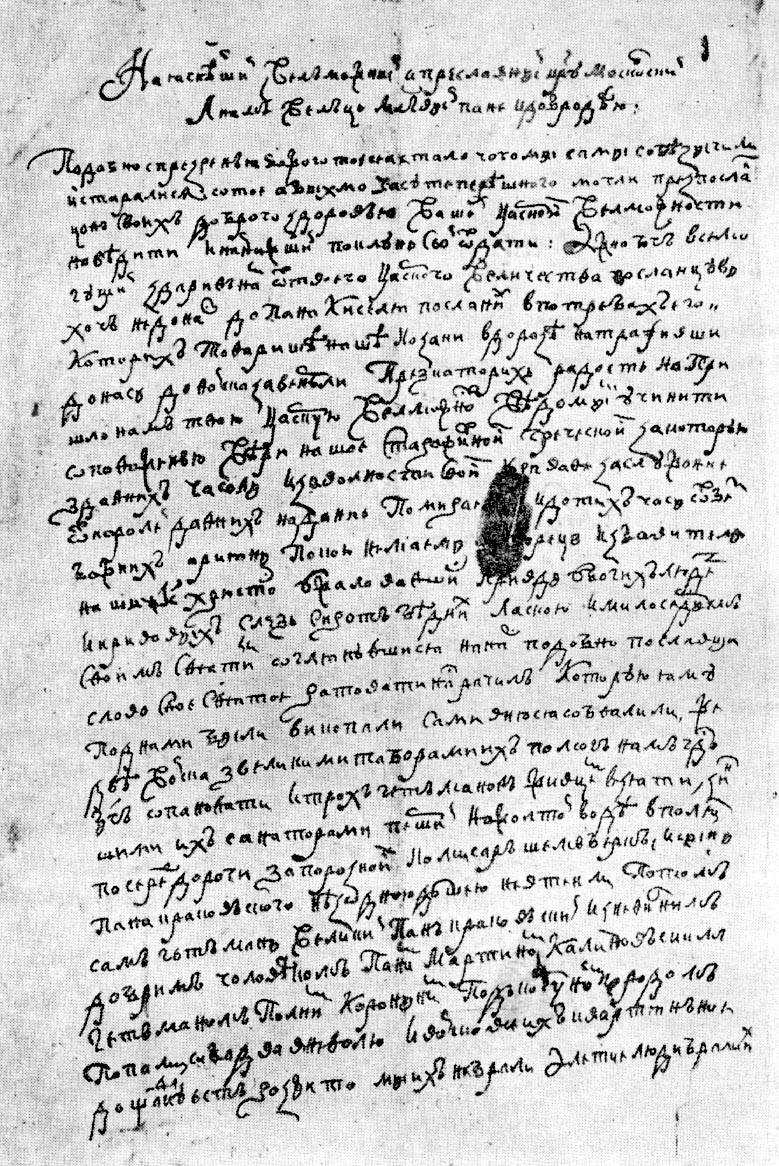 In the 1456th century, centrifugal tendencies accelerated, and the religious question was the start of this. Back in the XNUMXth century, there were two metropolises of Kiev: one in Galich, the second in Vladimir. And, in fact, Orthodoxy has nothing to do with it - the Rurikovichs fought for power. It is clear that the Gediminovichs also did not want their church to be subordinate to Moscow, where the Metropolitan moved from Vladimir, and set up their Kiev Metropolitanate, however, in Vilna in XNUMX.

In the 1569th century, two unions were signed. The first was in 1596, under the name Lublinskaya. And according to it, Kiev region, Volhynia and Podillia were transferred to Poland in exchange for the creation of an equal federation of Vilna and Warsaw. The fact is that Vilna was slowly and surely losing to Moscow, old Russian cities like Chernigov, Gomel, Bryansk, one after another, returned to Russia, and it seemed that a little more ... But it did not work out. Orderly Westernized Lithuanian princes and nobles preferred Warsaw to Moscow. In XNUMX, the situation was aggravated by the Beresteyskaya church union, which the population of Little Russia did not support and which actually made Orthodoxy illegal.

But for Little Russia (again, small - in the sense of the old, historical) difficult times have come. It was during this period that a price revolution was taking place in Europe, and Polish tycoons fell for the golden rain. In Moscow at that time, serfdom was difficult, in Europe too. And what was happening on the territory of Volyn and the Dnieper region was simply horror, aggravated by the constant raids of the Crimean Tatars, armed squabbles between the tycoons themselves and the Cossacks.

The Cossacks, in general, are an international phenomenon. In those days, wherever there was a burning border, hotheads settled who did not obey the authorities, did not believe in God or in the devil, and were waging their own war. And the Cossacks fought against the Poles, the Tatars, and Russia. A forgotten fact - Susanin was killed not by the Poles, but by the Zaporozhye Cossacks ... Nevertheless, it was the Cossacks who became the force that fought against Poland and the union. In the first third of the XNUMXth century, a series of Cossack uprisings swept across Little Russia. They demanded little - expanding the register and removing obstacles in the campaigns against the Crimea and the Ottoman Empire.

The uprisings were mercilessly choking. But in 1648, the head of the next riot, Bogdan Khmelnitsky, despite all the tales, agreed with the Crimean Tatars for the same purposes. In the same year, the united army reached almost to Warsaw, but did not storm the capital of Poland: Khmelnitsky sincerely tried to agree on the forty thousandth register and assign himself and his comrades-in-arms the dignity of the gentry. Negotiations were also conducted with Moscow, but Tsar Alexei Mikhailovich was openly afraid, having every reason for this - the Troubles ended less than half a century ago, and the war with Poland seemed a dubious undertaking. And the Cossacks did not fit into Russia at that time, to put it mildly, not very well. As a result, the war dragged on. Over time, the Cossacks began to suffer defeat, and Russia was faced with a choice: either to observe the massacre of Russian and Orthodox people (and Khmelnitsky himself titled himself Prince of Russia) further, or to intervene. The people would not have forgiven him for the first one.

As a result, the Pereyaslavl Rada of 1654, and the autonomous Little Russia - the Hetmanate within Russia. True, not all. On this territory, the fighting thundered for a long time. Hetmans and candidates for hetmans called on anyone to get the coveted mace. The result is Ruin, a war of all against all, in which the Ottoman Empire and the Polish-Lithuanian Commonwealth willingly intervened. The ending is somewhat predictable: Little Russia was simply divided. The left bank and Kiev with Zaporozhye passed to Russia, becoming an autonomy within it, with very broad rights. The devastated Right Bank partly went to the Commonwealth, and partly to the Ottomans.

Then the Ukrainian question was born in the modern sense - there were too many applicants for fertile and half-empty lands. And the locals, who gravitated towards Russia, were never particularly asked.

In that glorious era, who weapon - he is the main one, but the peasants and townspeople did not have it.