Death Scythe: the two-handed swords of the Middle Ages and Renaissance 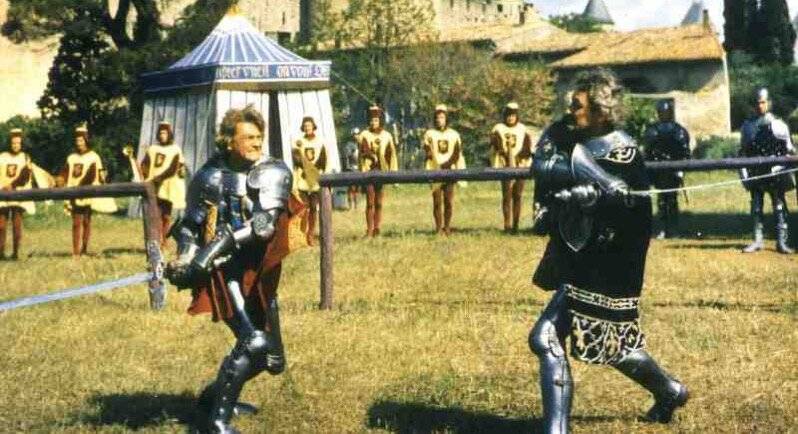 Still from the film "The Miracle of the Wolves" (in the Soviet box office "Secrets of the Burgundian Court"), 1961 France-Italy. Before us is the most spectacular scene of this film - God's Judgment, a duel that should decide the fate of a beautiful innocent heroine. A knight without fear or reproach, de Neuville, played by the equally impeccable Jean Marais, fights against the best villain of French cinema, Guy Delorme. It is clear that justice will certainly prevail, but only after a desperate fight - first on horseback, and then in hand-to-hand combat on foot, just with two-handed swords!

Praise the sword
Mchi,
sword,
Sickle
sech,
Beach
battles
Brother
razors
(Program "Skald". A. Kondratov. "Formulas of a miracle")
Weapon from museums. So it's time to talk about swords, and not about some "ordinary" or even about the same swords of the Vikings (we already talked about them on VO), but about swords for two hands, swords "with a capital letter", swords which novelists love to incorporate into their books. For example, one writer came to me and told me that Maurice Druon, of course, is well done, and his series "Damned Kings" is impressive, but he wants to write a series ... "before," that is, about the kings who created France and England, about "blessed kings". But ... he lacks data on weapons. Asked for help to fix it, and I helped. Then he even held one of the books in his hands, although now for some reason I did not even find a mention of these books on the Internet. Well, what was the name of this author, I, of course, do not remember. Another thing is important: it was striking that, although this is happening at the very beginning of the Anglo-French stories, that is, in 1066, and later, for about 100 years, two-handed swords are regularly mentioned there, as well as the loose hair and white wedding dress of a French noble girl. It was a long time ago, but since then the topic of two-handed swords has bothered me, besides, I even promised it to someone at VO. But then there are no good photos, that is, photos, but there is little information for them. And only now the "stars have converged": there are photographs and there is information, and if so, then you can write ...

A two-handed sword with a pear-shaped pommel; an octagonal wooden handle covered with leather, with a convex molding in the middle and a straight round guard with chiseled balusters; both the crosses and the side rings are made as one piece; a double-edged blade, with a copper-inlaid mark of the master; the ricasso and the side lugs are engraved and gilded with figures of St. Barbara and St. Peter on the one hand, St. Catherine and St. Paul (?) on the other, in the best traditions of the Renaissance. The master is unknown. Made in Milan, approx. 1500-1510 Material and technology: iron, steel, leather, wood and copper; blackening, polishing, turning, etching and gilding. Length: 112,8 cm, blade; length: 37,6 cm, handle; length: 29,8 cm, cross hair; length: 17 cm, ricasso; width: 4,6 cm; weight: 2,46 kg. (c) Wallace Meeting Board of Trustees, London 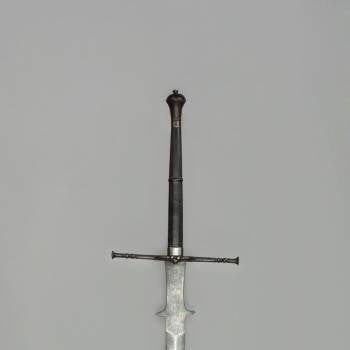 His hilt. Close-up. (c) Wallace Meeting Board of Trustees, London
Let's start with the fact that the "master of swords" - now legendary Ewart Oakeshott, in his typology singled out swords with long handles in the XX type. At the same time, he was talking about a large sword-bastard ("sword in one and a half-hand"), and about real two-handed swords. The length of their handles is 20-25 cm, the length of the blade is from 90 to 100 cm, and the blade itself is wide, with two or three lobes, and the middle lobe is longer than the lateral ones. The origin of such swords, in his opinion, is as follows. In addition to the usual knightly sword, knights somewhere in the XIV century, that is, in the era of mixed, chain-plate armor, acquired the so-called "swords of war" or "long swords", "battle swords" - just in different countries they were called in their own way ... 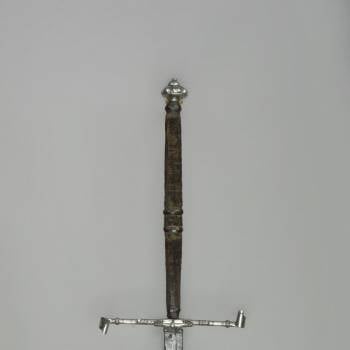 The handle of a two-handed "German sword" with a mushroom-shaped pommel of shiny steel, an oval-shaped handle, trimmed with velvet, with two rings, trimmed with leather; horizontally curved round cross-section, decorated with monster heads and ending in curls; side rings on both sides are decorated in the same way; the crosshair and side rings are made in one piece; a double-edged hexagonal blade at the base, with strong ricasso and side protrusions; the ricasso is trimmed with wood and leather with a carved pattern. Perhaps approx. 1540 Germany, Master unknown. Materials: iron or steel, wood, velvet and leather. Length: 127,2 cm, blade; length: 60,2 cm, handle; length: 38 cm, cross hair; length: 11,5 cm, ricasso; width: 4,5 cm; weight: 3,8 kg. (c) Wallace Meeting Board of Trustees, London
Moreover, the French called the "battle sword" "great german sword", Which directly indicates its origin and distribution. At the end of the late Middle Ages and at the stage of transition to the Renaissance, more and more small details appear on swords. First of all, on the cross, the shape of which also changes. 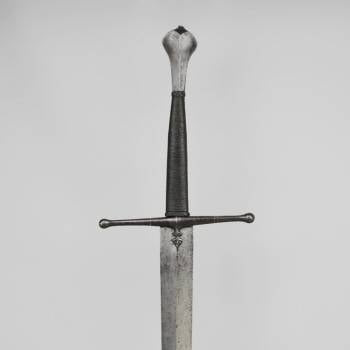 Close-up of its hilt. (c) Wallace Meeting Board of Trustees, London
They were no longer worn at the waist, but on the left at the saddle. And such swords were needed primarily for fighting the infantry, in order to have an advantage over it, and being in the saddle, to be able to reach an infantryman who fell to the ground with such a sword. The difference between swords - bastard and two-handed sword of the Middle Ages, Thomas Laible determines the length of the blade. The first has about 90 cm, the second - about 100. Although they fought with both bastard and two-handed sword with two hands.

However, if the bastard remained a knightly weapon, then the two-handed man began to be used by burghers in everyday life for self-defense. The first could be fenced with both one and two hands, holding the hand on the long pommel, but the second had both hands on the handle. The main thing in this case for us is the chronology - the XIV-XV centuries, the era when they appeared. Before that there were no swords that could be fought with two hands. The weight of such a sword could reach 2,2 kg with a total length of 126 cm and a blade length of 98 cm. But ... as always, but. The same Thomas Laible gives data on the bastard sword made at the end of the XIV century. Its total length is 135 cm, the blade is 106 cm, and its weight is about 2,2 kg. So the difference here is shaky just to the point of disbelief.

Perhaps the most noticeable difference between a two-handed Renaissance sword and a medieval sword will be the protective rings on the crosshairs. There are rings to the left and right of the crosshair - Renaissance, no ... the time is earlier, that is, before 1492, the discovery of America by Columbus. This is Oakeshott's type XX. The replica of such a sword, which Laible speaks of, has a diamond-shaped blade with three valleys, and a parrying ring on the left and right on the crosshair. Length 120 cm, weight 1,6 kg. It is clear that the knights could carry such swords only at the saddle, and used them as weapons for ... "certain" situations.

Later, shorter swords with a complex system of arcs near the crosshair appeared - these were already swords of a transitional form from swords to swords. Such swords have been around since 1500. But they were used later, up to the XNUMXth century.

Classic sword of the early 104,3th century (hilt). Material: iron, steel and copper alloy. Length: 4,9 cm; width: 1,985 cm; weight: XNUMX kg. (c) Wallace Meeting Board of Trustees, London
And now, having clarified the background of the two-handed sword, we will fast forward exactly 100 years and ... find ourselves in the era of its heyday and a very special purpose. The sword simply increased in monstrous size and became the weapon of the infantry. And not just infantry. And the infantry of the Landsknechts. It was used by the warriors of "double salary", who walked in front of the detachment and cut off the ends of the Swiss peaks with them, and then cut them into their ranks. 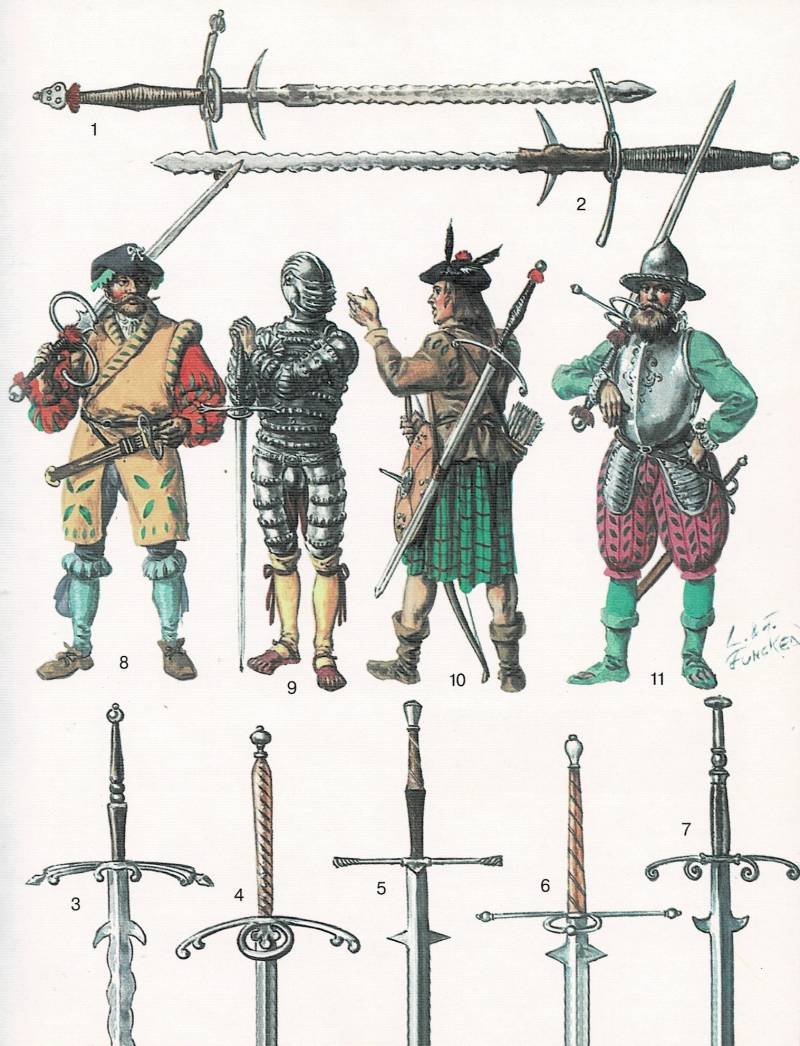 Two-handed swords and warriors who fought with them: 1. Slasher of the second half of the 2th century. The two hooks in front of the ricasso are designed to "shorten" the handle at some moments of the fight, slow down chopping blows and increase the power of straight blows. The wavy blade was designed to inflict more serious injuries. 3. Espadon, late 4th century. 5. Second half of the 1500th century. 6. End of the 7th century. 8. 1520 9. The middle of the XVI century. This is the Italian "spadone a due mani" (two-handed espadon). 1520. The middle of the XVI century. 10. 11 You can see the guard in the shape of the letter "S". 1580. Soldier in three-quarter armor, 2002 21. Scotsman, XNUMXth century, with claymore (claymore or claid-heamtb-mor). A two-handed sword of this type was usually carried behind the back. XNUMX. Soldier "on a double salary", XNUMX: veterans who fought in the front row and more or less clad in cuirasses received a double salary, hence their name "double-soldes". Illustration from the book by Liliana and Fred Funkenov “Encyclopedia of weapons and military clothing. Middle Ages. Renaissance: Infantry. Cavalry. Artillery. M .: Astrel, XNUMX, p. XNUMX

This is how they fought with these swords in battle. Contemporaries often talked about the danger posed by these "masters of the sword" who, with a single wave of their weapons, put their enemies to flight. But they obviously only intervened on special occasions and made up a tiny percentage of the other foot soldiers. In a drawing by Hans Holbein the Younger, we are shown one "master of the sword" among about thirty pikemen and soldiers with halberds. Illustration from the book by Liliana and Fred Funkenov “Encyclopedia of weapons and military clothing. Middle Ages. Renaissance: Infantry. Cavalry. Artillery. M .: Astrel, 2002, p. 121
Now let's look at this classic two-handed sword with a blackened oval hilt, covered with leather and studded with brass-headed rivets. The crosshairs are bent forward and end in curls. Large side rings are attached to the crosshair on both sides. A double-edged blade with wavy blades, the manufacturer's mark is applied on each side; ricasso trimmed in wood and woven leather with carvings. It is known that Christoph I Stantler, a master gunsmith from Passau, who emigrated to Munich around 1555, designated his products with the sign applied to the blade. A series of two-handed swords with this mark is in the National Museum in Munich; at the Historical Museum in Vienna (one dated to 1575); five are in the Army Museum in Paris and many other places. That is, this master worked very fruitfully! 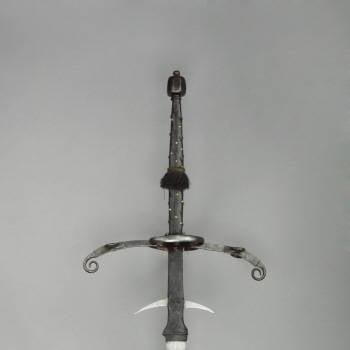 Close-up of the hilt of this sword. (c) Wallace Meeting Board of Trustees, London
Well, we will tell you more about the two-handed swords of the Renaissance, especially about swords with "flaming" blades next time.