Kiev blames DPR for the death of four Ukrainian servicemen 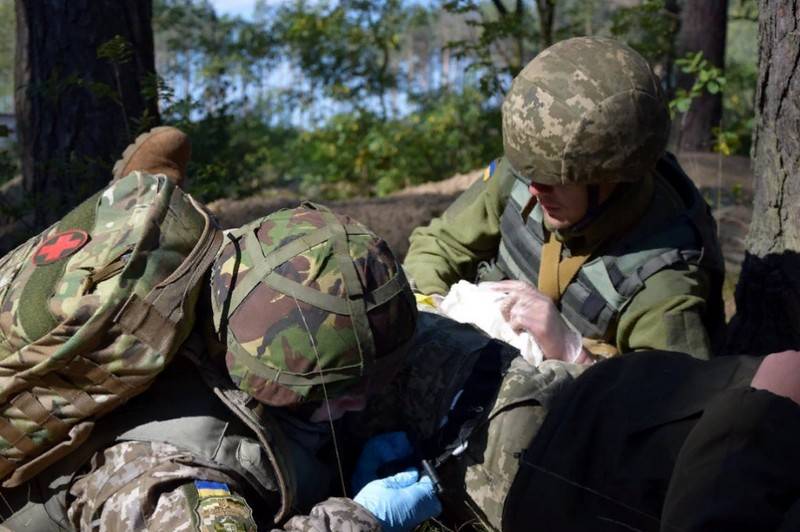 Four Ukrainian servicemen were killed in the Joint Forces Operation (JF) area. Kiev traditionally blamed "Russian separatists" from the DPR for the deaths of the military.


Initially, the information noise was raised by the so-called Ukrainian propagandist Yuriy Butusov, who directly blamed "Russian troops" for the deaths of servicemen of the Armed Forces of Ukraine. According to him, the "separatists" fired mortars at Ukrainian positions near the village of Shumy.


At 13.45, Russian troops fired mortars at Ukrainian positions near the village of Shumy. As a result of the shelling, 4 Ukrainian servicemen were killed
- wrote Butusov.

Later, the death of four and the injury of two more servicemen was confirmed by the press service of the JFO headquarters, also announcing the mortar shelling of Ukrainian positions.

As a result of the shelling, four servicemen from the Joint Forces were killed and two were injured. The wounded soldiers were promptly provided with first aid, they were taken to a hospital
- said in a statement.

In turn, the NM DNR denied the statements of the Ukrainian side, stating that Kiev is once again trying to write off losses from its own mines to the alleged shelling by DPR servicemen.

According to the DPR intelligence, in the area of ​​the positions of the Armed Forces of Ukraine in the village of Shumy, two explosions were heard, typical of detonated mine explosive devices.

The radio broadcast of the talks of Ukrainian militants noted requests to the senior command to evacuate the wounded who were blown up while moving between Ukrainian positions, as well as information about the blowing up and losses of personnel who moved to help the wounded
- stated in the DNI.

Meanwhile, Ukrainian President Volodymyr Zelenskyy directly accused the "separatists" of violating the ceasefire, stating that there were no violations on the part of Kiev. In connection with the death of four servicemen of the Armed Forces of Ukraine, the Chief of the General Staff of the Armed Forces of Ukraine flew into the JFO zone.
Ctrl Enter
Noticed oshЫbku Highlight text and press. Ctrl + Enter
We are
Summary of the week from voenkor Mag about events in the DNI and LC 21.04.18 - 27.04.18Summary of events in the DPR and LPR for 14.04.18 - 20.04.18 from the military commissar "Mag"
Military Reviewin Yandex News
Military Reviewin Google News
59 comments
Ad