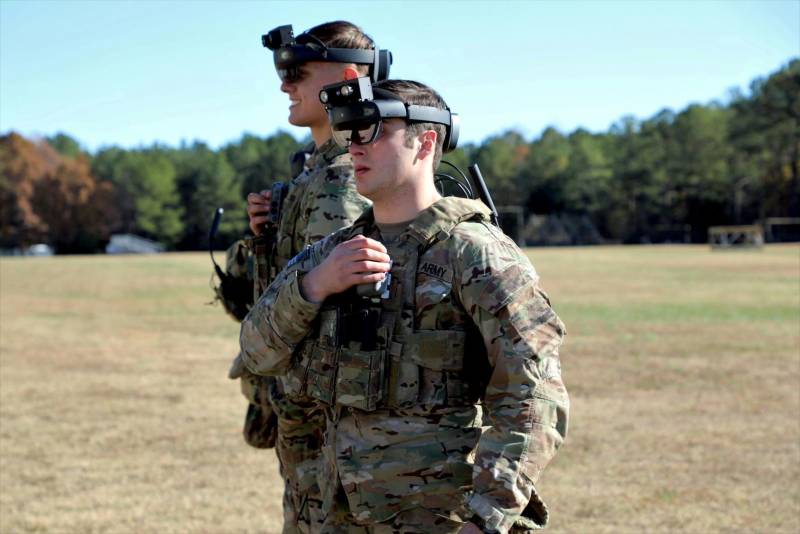 Since 2018, the Integrated Visual Augmentation System (IVAS) is being developed for the US Army. To date, several stages of testing have been carried out, and this summer a large batch of such products will undergo operational tests in the troops. The IVAS system complements the infantryman's other equipment and allows him to observe from under armor or from behind cover, as well as receive any necessary information.

Over the past few years, the US Army has been exploring the prospects and potential of augmented reality systems. For example, in 2017, experimental glasses FWS-1 were tested with the ability to output a video signal from a "smart" sight or from other sources. It was decided to continue the work and develop a similar concept.

The current IVAS project kicked off in early FY2019. Over the next three years, it was planned to develop a project, and then conduct all the necessary tests and prepare a promising system for implementation in the army. In 2021, it is planned to launch a series and deliver the first samples to combat units. The overall complexity of the project and the pandemic had an impact on the progress of the work, but did not lead to fatal consequences. The deadlines were generally met. 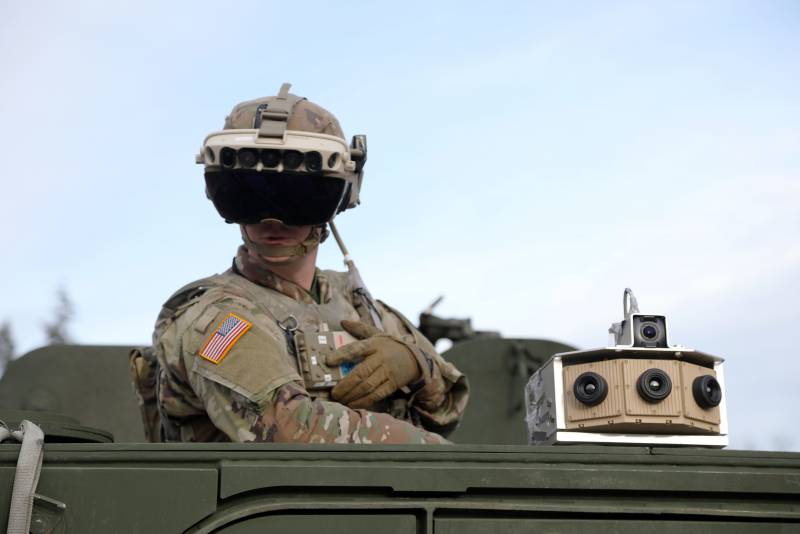 A soldier with IVAS Capability Set 3 goggles. Also, armored vehicle cameras were captured in the frame, the signal of which can be displayed on the goggles
Several organizations from the Pentagon and a number of commercial contractors are involved in the development of the IVAS system. The system is being created for use by motorized infantry, and therefore the structures responsible for the development of infantry weapons and its armored vehicles were involved in the project. In the early stages, Microsoft played a significant role by providing finished products and refined software.

The process of developing a new system was divided into four stages. Each of them provided for the creation of a new or updated sample that meets the specified requirements. So, in March 2019, the armies donated 50 IVAS Capability Set 1 - commercial augmented reality glasses Microsoft HoloLens 2 with redesigned software, an additional thermal imaging camera and other new functions. Tests of such prototypes allowed further development.

Already in October 2019, the army tested a batch of 300 IVAS Capability Set 2. At this stage, the standard army navigation and communications equipment was integrated into the system, which made it possible to abandon Wi-Fi communication. We also fixed various bugs identified earlier.

Last summer, work began with IVAS Capability Set 3 products; 600 such kits have been delivered. The new modification retained the bulk of the components and parts, but received a number of new ones. In addition, the performance of the system has changed - glasses and other devices were made taking into account the operation in the army and the corresponding loads. 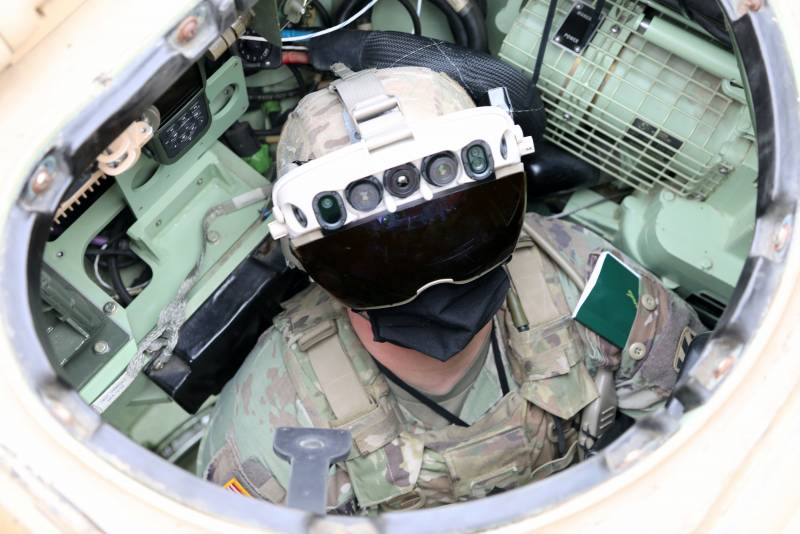 In the fall of 2020, 1600 IVAS Capability Set 4 units were delivered. This set retains the status of a prototype, but has a serial appearance. Set 4 had to pass all the necessary laboratory, range and military tests before being put into service. As expected, the last checks will take place this year and will determine the further fate of the project.

As a result of the development of the project, the IVAS system of a serial appearance differs markedly from the basic commercial augmented reality glasses. The system includes the actual glasses, electronic communication and data processing units, a control panel, as well as a battery system for powering them.

In the process of fine-tuning and adaptation for use in the army, the basic commercial glasses have undergone significant changes. Structurally, they consist of an upper part with a set of cameras for different purposes and actually large glasses with an integrated transparent liquid crystal screen. A strap system is provided for attaching to a standard helmet. These glasses combine the functions of face protection, optical range stereo cameras and night vision devices.

The main task of the electronic unit is to receive a signal from cameras and data from a third-party source, followed by processing and output of the required image to glasses. The reverse process is also possible with the transmission of the video signal from the glasses to another user. In addition, navigation means and a system for assessing the physical condition of a fighter are integrated into the electronic unit. Pulse, body temperature, fatigue, etc. change. Work is underway to introduce an ultralight reconnaissance UAV into the complex. 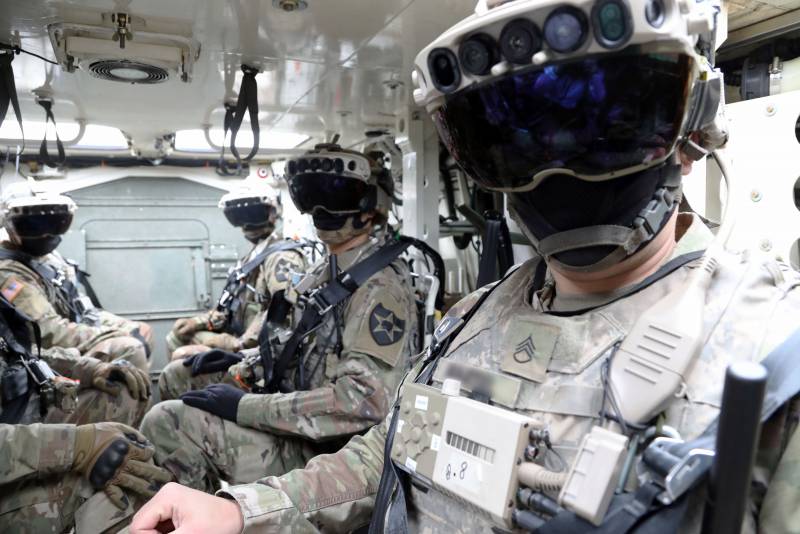 With the help of IVAS kits, the unit commander or headquarters can constantly monitor the location and condition of each of the unit's fighters. It also becomes possible to request an image from the cameras of a particular soldier or show him the required image.

The main task of the IVAS kit is considered to increase the situational awareness of infantrymen. When traveling on armored vehicles, fighters can receive a signal from its external cameras and monitor the external situation without leaving the protected area. This simplifies the timely detection of threats to the infantry or vehicle, and also ensures a safe landing. After dismounting, soldiers will be able to take cover behind an armored vehicle or other objects, while retaining the ability to observe the situation.

The glasses can display a video signal from the "smart" sights of the rifle weapons, with a UAV, etc. In this case, there is no need to carry several different devices with their own screens - they are replaced by one set of IVAS, which has a number of other functions.

In the summer of last year, tests began on the IVAS kits of the third and fourth versions, carried out taking into account all the requirements of the army. Testing is carried out in different conditions and with the solution of different problems. The units of the ground forces and the marines are involved in this work - in the future, they will be the ones who will use advanced equipment. The work of the complex was checked at the level of squad, platoon and company. 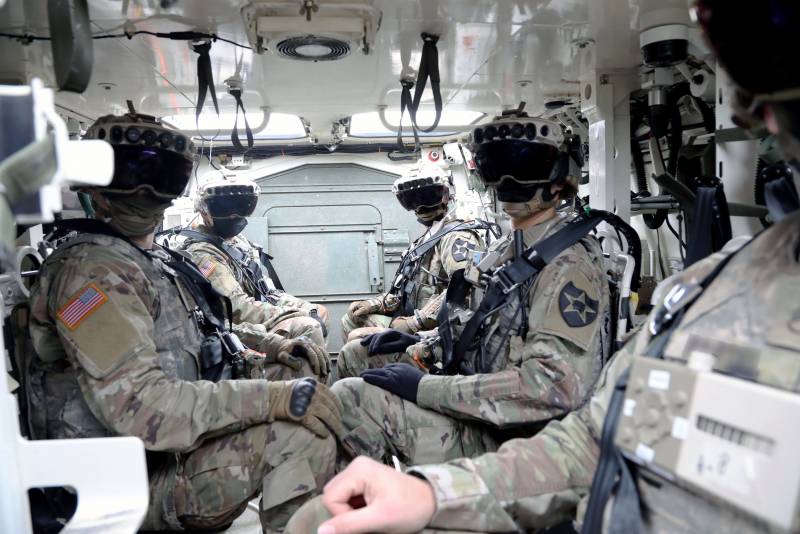 The tests were carried out at training complexes and in the field. The features of the integration of IVAS with the optoelectronic equipment of armored vehicles and work in other circuits were also tested. In October, with the help of the kit, one of the most difficult combat training tasks was solved - the capture of the enemy's trench system at night.

The developers argue that the current testing phase is of particular importance for the entire project. Soldiers with the necessary skills and abilities use the IVAS system in conditions of simulating a real combat exit or clash. Based on the results of such an event, they can draw up a detailed report.

In July 2021, it is planned to start operational tests on the basis of army units. Shortly thereafter, before the end of the fiscal year, the first infantry unit will be fully equipped with the new IVAS systems. Who will become the first combat operators of these products is not reported. Then the completion of all necessary procedures and the official acceptance of the kit into service are expected.

Current plans include the purchase of 40 thousand IVAS sets and the re-equipment of several large formations of the army and the ILC. The total cost of these products was initially set at $ 1,1 billion (27,5 thousand per set). In December last year, Congress cut the budget for such purchases by 230 million, which may affect the pace of production and rearmament. 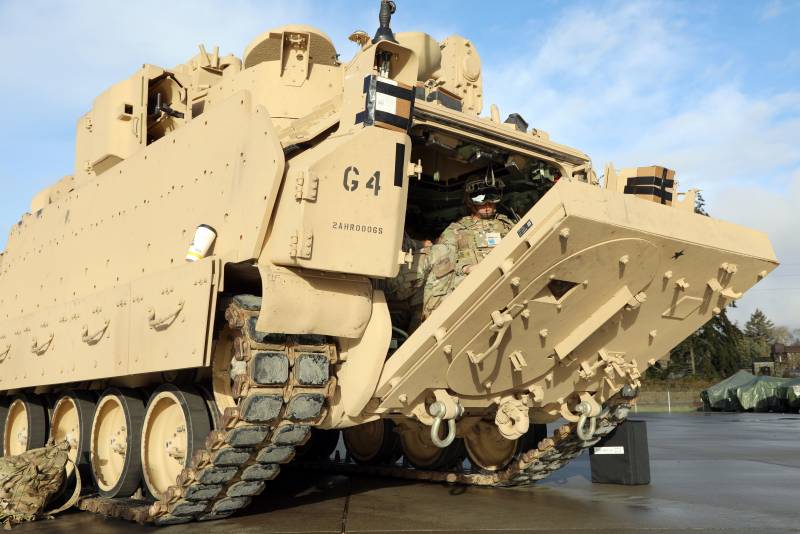 Obviously, 40 thousand points will not be enough to equip the entire infantry, and new orders can be expected. It is also possible that other structures of the armed forces, such as special operations forces, will show interest in this development.

At the finish line

Helmets and goggles with their own screens and the ability to display various information have obvious advantages. They simplify the issuance of information and the exchange of data, and also make it possible to increase the efficiency of an individual soldier, unit or combat vehicle. Such technologies have already found application in modern tactical aircraft projects. aviation, and now they are being brought up to use in the infantry.

It is to be expected that the Pentagon will successfully complete the current IVAS project and launch the re-equipment of infantry units. However, the exact timing of the start of deliveries and the achievement of full combat readiness, the final volume of orders and their cost remain in question. Given the overall complexity and high cost of promising promising samples, it can be expected that IVAS will go to the troops, but the mass introduction of these products will turn out to be more expensive and time-consuming than originally planned.