Contradictions between Russia and NATO will manifest itself in Syria 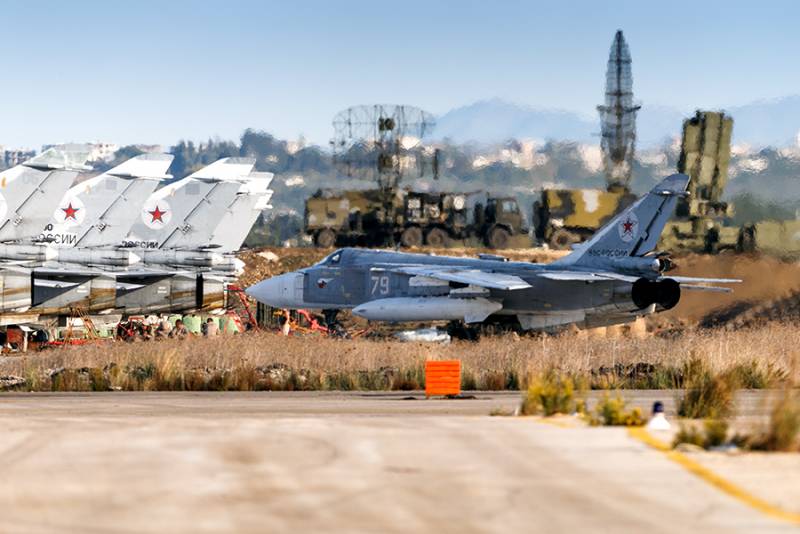 Today, only a very lazy person does not write about the deterioration of relations between Russia and NATO, Russia and the EU, Russia and the United States. It is clear that much of what has already been said by politicians, top officials of states and other people well-known to the world really inspires some fear in the average person. What if there is an inadequate among the presidents, chancellors, prime ministers, who will press a button in a nuclear briefcase ...

It is clear that the "war of nerves" looks quite menacing. All these plans for the collapse of the enemy's economy, the threat of a military attack, sanctions, restrictions, expulsion of diplomats and so on, correctly submitted to the average person through the media, arouses fear in him and distracts his attention from problems within the state. And if we add to this, for example, the upcoming elections, then it also plays on the popularity of candidates for deputies or for some positions.

Meanwhile, the confrontation that really exists between Russia and the West, between various Western countries, is already causing real changes in the situation in the world. No, not where we wait. Not in the west, but in the Middle East, in Syria. It is about this region, more precisely, about what has changed there today, and it is worth talking about. And the changes are indeed global, albeit subtle for the average person.

How the leading players on the Syrian field behave today

If we analyze the situation that has developed in relations between the players in Syria, then several interesting facts immediately catch the eye. The first is a change in the attitude of Bashar al-Assad and his team to the Syrian hydrocarbon fields. We somehow forgot that almost 90% of such fields are now controlled by the United States. And the Americans do not hesitate to openly plunder Syria, exporting oil from there.

Honestly, I don’t remember right away the time when the question of control over these deposits was raised at all. Everyone talks about the American zone in northeastern Syria, but few remember the robbery. In my opinion, this issue was raised by the Syrian ambassador a year ago. Now voices are being heard that the funds received from the sale of oil would greatly help the recovery of the country's economy.

The next fact is the contradictions between the Americans and the Turks. I have already written that the Turkish president is playing his game in Syria and solving his problems. Erdogan skillfully uses his advantages in relations with the United States. Moreover, since the Turks are also not averse to having a piece of the Syrian oil pie, both countries turn a blind eye to the actions of the SAR against a competitor. There is no open confrontation, but the inner tension is felt.

Changes in Russia's actions are also interesting. Many people remember how much we talked about mutual warning of the military about impending operations. This is clear. The security of your own military is important. It is one thing when, during some operations, strikes are delivered to militants or to the positions of the SAA, it is another thing when the strike is directed at the Russian, American or Turkish military.

After the Americans warned our military about the strike a few minutes before it began, the actions of the Aerospace Forces also changed. The latest strikes directed against the militants' oil depots have shown that today, if the military does not have data on the presence of foreign military personnel in the area, the strike is delivered in approximately the same vein as the American strike, which I wrote about above.

We are somehow used to the fact that the militants in Syria no longer represent a serious military force. Yes, these are the allies of the Turks or the Americans who are fighting the SAA. But this war is local, in certain territories. And for certain territories. Meanwhile, the problem of militants in Syria has not been resolved! Here is a quote from an interview with Syria specialist, political scientist Kamran Hasanov on Sputnik radio:

“The situation in Idlib province remains frozen after about a year ago the presidents of Russia and Turkey concluded an agreement on the cessation of hostilities, on the delimitation of the line of fire. But the topic of terrorists has not gone anywhere. A certain part of Idlib is occupied by the armed opposition, which Russia also recognizes to one degree or another, but still the largest part is the terrorists Hayat Tahrir al-Sham. " (request in RF)
It is Hayat Tahrir al-Sham ”(requested in RF) that has become more active today. Field commanders, according to some sources, maintain contact with both the Americans and the Turks. The situation is like in the Russian proverb about an affectionate calf that sucks two queens. And the strikes of the Aerospace Forces are directed precisely at the militants of this organization. But for some reason, Turks and Americans are expressing "concern" to us ...

We tried to persuade the opposing sides to start negotiations for a long time. We inform the world about upcoming provocations. We're talking about strikes against civilians. And at the same time they agree to put enemies at the negotiating table.

Let me remind you why the Aerospace Forces struck at the headquarters of Hayat Tahrir al-Sham (requested in the Russian Federation) in the province of Idlib. A few days ago, mobile militants fired homemade rockets and mines in Aleppo. A fairly large number of civilians were killed and injured. The raid was a response to this shelling.

Moreover, the video most often shows a raid on the headquarters and fuel trucks. And there were several targets, and the losses of the militants from this only increased. According to a Reuters report citing its own sources in Syria, the Russian Aerospace Forces struck a terrorist target near a border crossing on the outskirts of Sarmad, and a ground-to-ground missile hit a target in the city of Kakh. True, there is no confirmation of the message about the target in Kakh so far. I do not yet know who delivered this blow.

It is strange to write this, but against the background of the scandal with the interview of the American president, the US military "hid". Regular patrols, common work that the military of both the United States and Russia regularly do. There are no serious incidents. Perhaps because today they are performing a different task - to embroil Erdogan and Putin. Hence, the transfer of active actions of the militants to the Idlib de-escalation zone.

At the same time, Syrian oil from the US-controlled areas is regularly delivered to Iraq, and from there it is sold as local oil. The United States is not going to remove its military base at Al-Tanf. Moreover, the Americans are strengthening another military base. In the area of ​​the Kharab al-Jir airfield in Hasakah province. A large military convoy of 40 trucks and several armored vehicles recently arrived there.

Here it is appropriate to quote one of the Russian senators, Alexei Pushkov:

“Together with allies from the Kurdish formations of the Forces of Democratic Syria (SDS), the Americans organized the transportation of black gold to Iraq, from where the raw materials go to the international market. According to the Syrian Minister of Oil and Mineral Resources Bassam Tuome, due to the actions of the Americans, the country has lost more than $ 92 billion. They act like pirates, targeting the country's oil wealth and the ships that supply oil. "
Thus, today special attention should be paid to the regions controlled by Turkey. Moreover, the militants are not going to stop attacks and provocations in Idlib. Recently, Deputy Head of the Center for Reconciliation of Warring Parties in Syria, Rear Admiral Alexander Karpov, announced the following information:

"The Center for the Reconciliation of Warring Parties is receiving information about the preparation by the terrorist organization Hayat Tahrir al-Sham of a provocation with the use of poisonous substances in the north-east of Idlib province."

"Terrorists intend to stage a chemical attack in the area of ​​Kitian in order to blame the Syrian government army for this."

Interim conclusions on the situation

No matter how we treat Turkish President Erdogan, he just uses this confrontation for his own purposes. He uses it competently, sometimes even dashingly. But everyone understands perfectly well that Turkey is acting only to the extent that the Russian Federation and the United States allow it.

Recent events, especially the actions of the Russian Aerospace Forces, show that there will be no quiet life for the militants. The time for negotiations is passing. Now the guns will speak. In the modern version, of course. Today it has become interesting to read the materials of Russian military correspondents in Syria. Sappers blew up the "underground city" of the militants. Russian planes destroyed the militants' headquarters and base. And so on.

It is clear that the intensification of the actions of the Syrian government army and the Russian Aerospace Forces will not lead to a conflict with the United States or Turkey. But the fact that the militants really want to start negotiations with President Assad is quite possible. Damascus has not yet been able to oust the Americans and Turks from the areas they control.

So the immediate task will sound like this - to stop provocations, establish peace throughout Syria and begin negotiations on the political and economic structure of the state. Almost the same that stood after the elimination of ISIS (request in the Russian Federation).