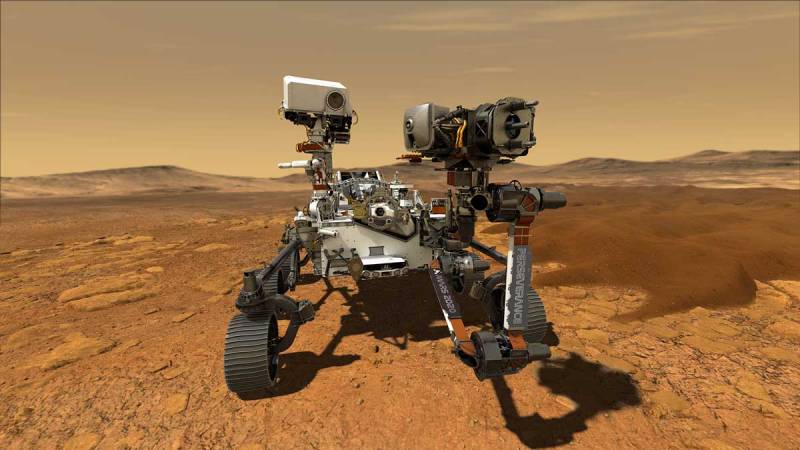 The first rover to successfully land on Mars was the American Sojourner. As part of the Mars Pathfinder program, he worked on the planet for three whole months in 1997, several times exceeding the estimated lifetime. The rover was not faced with particularly difficult tasks - the very fact of finding a terrestrial robotic apparatus on the Red Planet made a splash in the world. Nevertheless, Sojourner managed to send a lot of photographs of Mars, as well as conduct simple meteorological and geological studies. 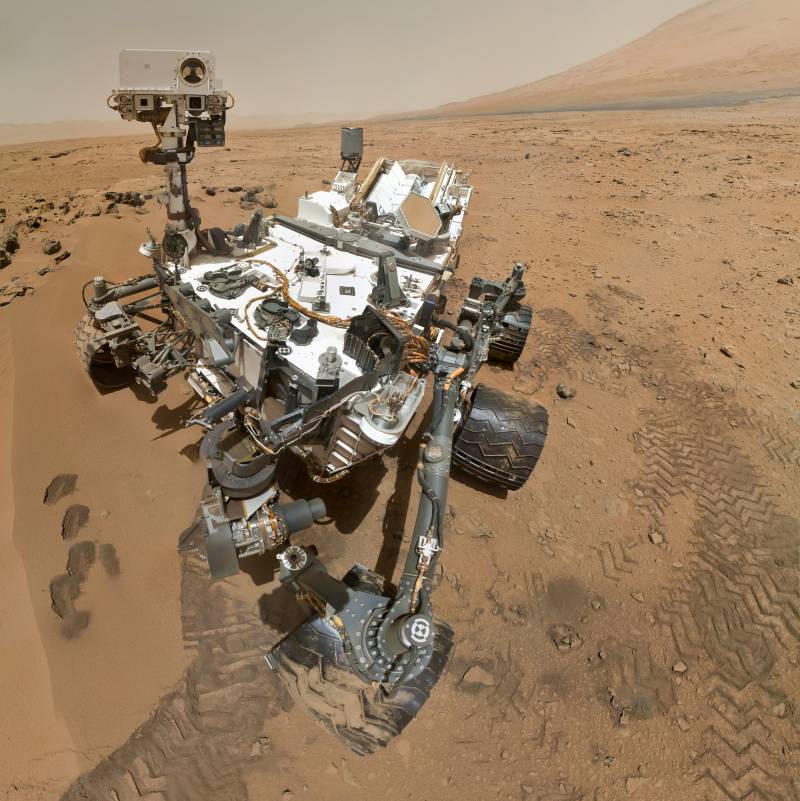 Rover Curiosity. Source: ru.wikipedia.org
Two years later, NASA again sent a Mars mission into space, aimed at a detailed study of the planet's soil and climatic conditions. The Mars Polar Lander mission ended in failure - the descent vehicle crashed for reasons still unknown. On board the spacecraft, the Russian laser radar (lidar), designed to study the composition of the atmosphere, also disappeared. 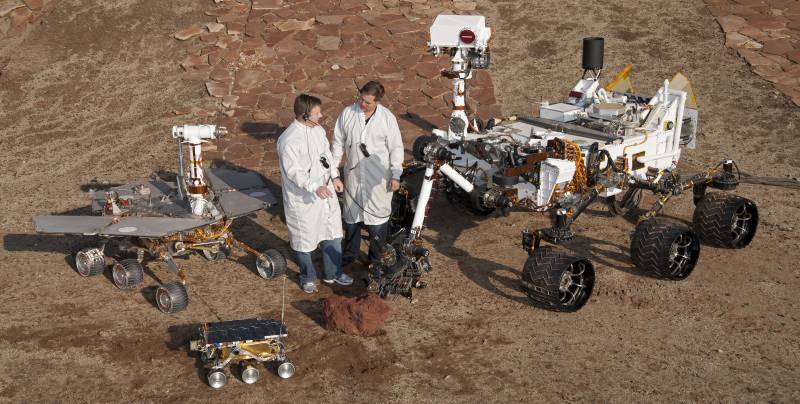 Three generations of American rovers. Source: ru.wikipedia.org
The Americans entered the 2003st century as the undisputed world leaders in the exploration of Mars and backed up their success in 2004 with the launch of the Mars Exploration Rover program. According to the plan, two rovers were supposed to study the planet - Spirit and Opportunity. Both lander rovers landed on the surface of Mars in January 21 with an interval of 2018 Earth days. The Opportunity design proved to be so reliable and durable that the rover continued to operate until June XNUMX.

Now a 900-kilogram Curiosity rover with a radioisotope power source is operating on Mars, which hit the planet back in August 2012. Its main task is to drill and examine samples. At the moment, the mission has been extended indefinitely.

This was not enough for the Americans, and even earlier, in 2008, a small-sized Phoenix station appeared on the planet, one of whose missions was to search for extraterrestrial life. The device was not adapted to movement, was relatively cheap ($ 400 million) and lived in an active state for only a few months. Nevertheless, Phoenix discovered water on Mars and carried out a simple chemical analysis of the soil.

It took the Americans almost ten years to replace the stationary exploration robot that went offline in the fall of 2008. The Mars seismic station with NASA's InSight rig landed on the planet in 2018 and has been successfully sending research results to Earth to date. 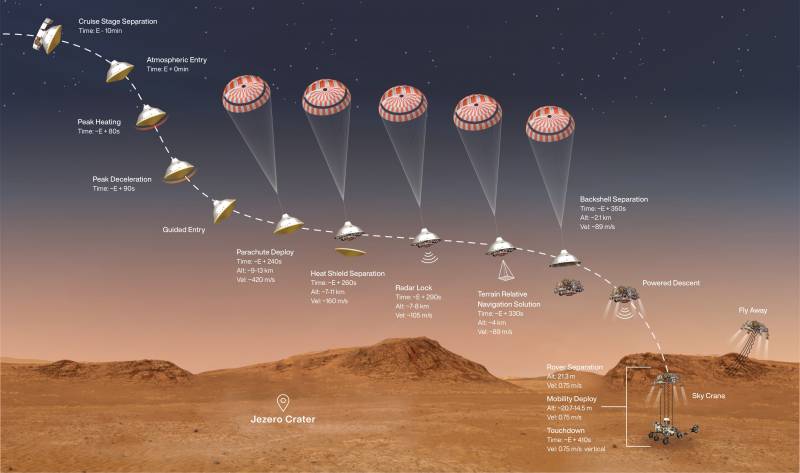 Perseverance landing trajectory on Mars. Source: mars.nasa.gov
The presence of one mobile and one stationary Martian apparatus is clearly not enough for the Americans. To consolidate its presence on Mars, on February 18, 2021, the Perseverance rover landed on the surface. And he has his own helicopter.

Is there life on Mars?

First of all, Perseverance is the largest rover that has been dropped on the Red Planet so far. Elon Musk once catapulted his electric roadster into space, and NASA sent a car-sized rover to Mars. Perseverance is about 3 meters long, 2,7 meters wide and 2,2 meters high. For a rather large rover, super-strong and ultra-light materials were used, which is why the weight of the device in terrestrial conditions barely exceeds a ton. Under Mars conditions, Perseverance will weigh two and a half times less. 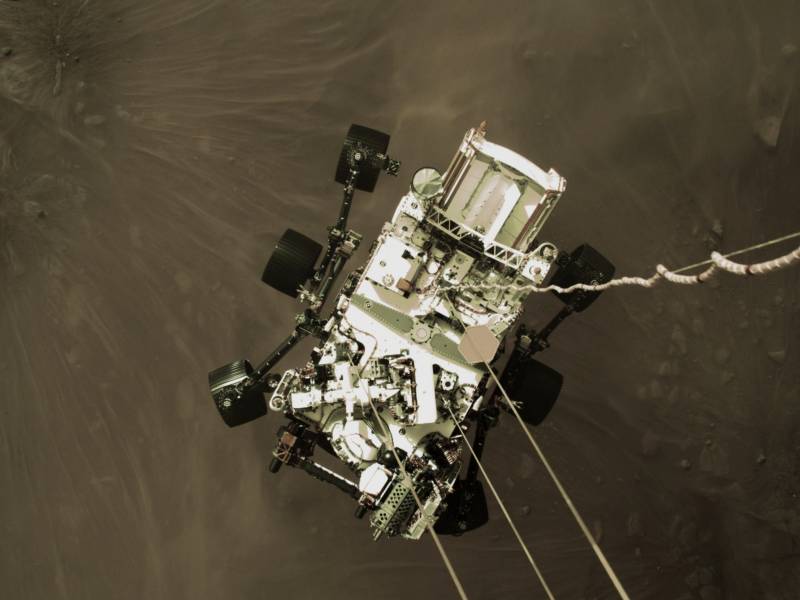 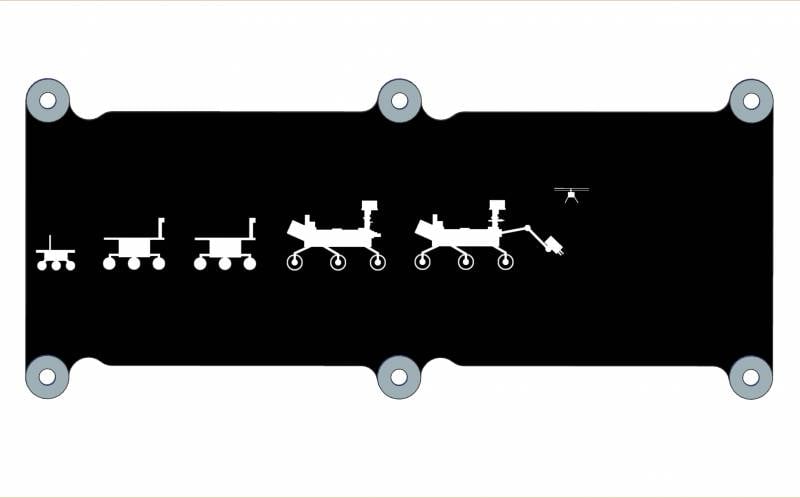 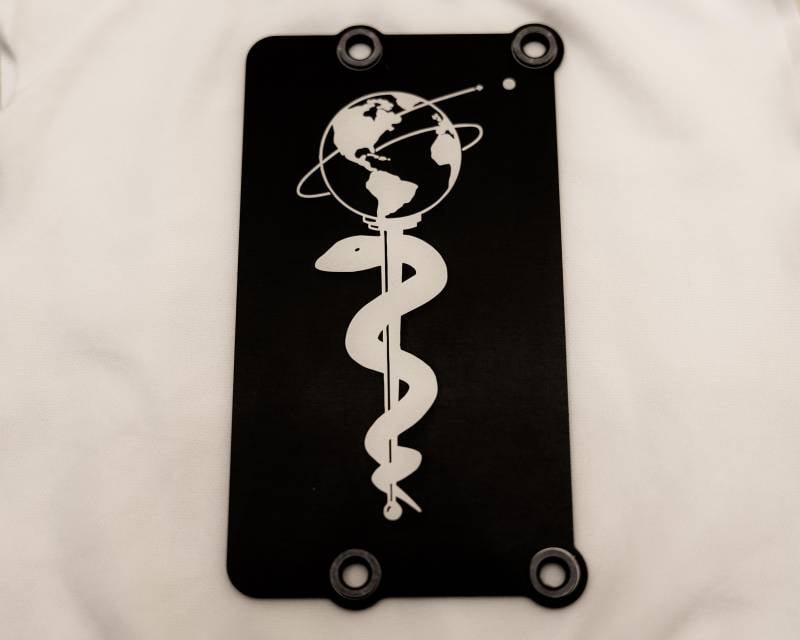 Perseverance brought such cute trinkets to Mars. Source: mars.nasa.gov
The launch of such a complex and expensive project (more than $ 3 billion) must be supported by an appropriate research program on Mars. To justify the spent, the Americans equipped the rover with several interesting gadgets at once.

First of all, this is the MOXIE model apparatus for the synthesis of oxygen from carbon dioxide in the Martian atmosphere, the share of which reaches 93%. In theory, everything is very simple - from the carbon dioxide molecule CO2 we tear off atomic oxygen and combine it with one of the same. The exhaust produces carbon monoxide and molecular oxygen, which is quite breathable.

Prior to that, in space conditions, oxygen was synthesized by electrolysis of water, but for the life of one person, a whole kilogram of water per day is required - this method is not applicable to Mars. In short, the MOXIE apparatus compresses carbon dioxide, heats it up to 800 degrees and passes an electric current through it. As a result, pure oxygen is released at the anode of the gas cell, and carbon monoxide at the anode. Then the gas mixture is cooled, checked for purity and released into the atmosphere of Mars.

Obviously, in the distant future, thousands of such generators will process Martian carbon dioxide into a human-friendly atmosphere. It is noteworthy that this technology is not the most progressive. Still, according to the theory, from two CO molecules2 only one O is produced2... And this is very far from the real effectiveness of such installations. Much more interesting is the idea of ​​splitting carbon dioxide into carbon C and a molecule O2... In 2014, the journal Science published a method for the synthesis of oxygen from CO2 under the influence of ultraviolet lasers. Five years later, the California Institute of Technology came up with the idea of ​​accelerating and hitting carbon dioxide molecules on inert surfaces such as gold foil. As a result of this barbaric treatment, carbon dioxide is split into molecular oxygen and carbon, that is, soot. But while such techniques are far from technological perfection, and NASA has to be content with devices like MOXIE. 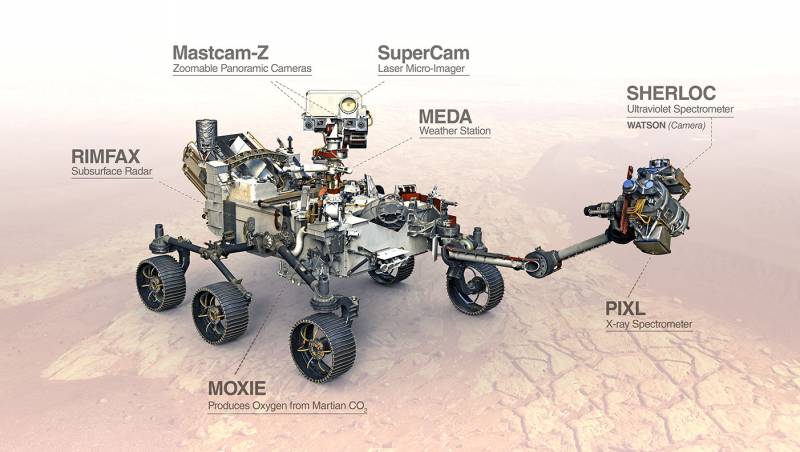 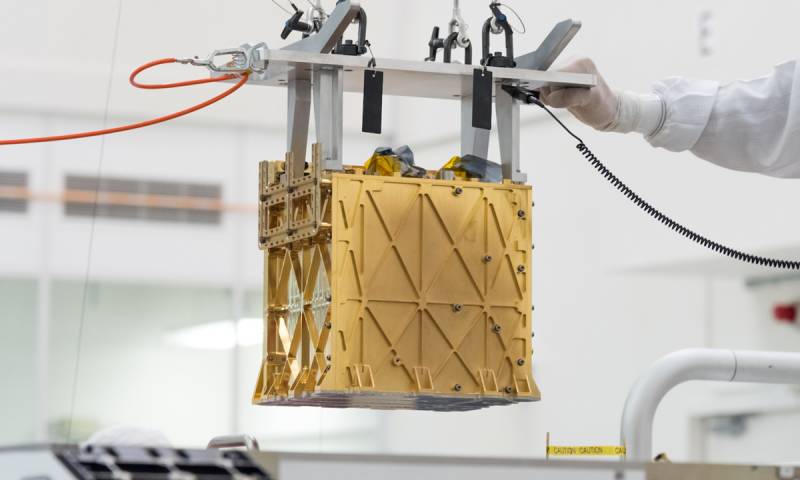 Oxygen generator MOXIE. Source: mars.nasa.gov
The second interesting gadget for the rover is the PIXL, which is designed to scan the surrounding area with X-rays. The device conducts remote testing of soil for chemicals and elements that can be markers of living things. The developers assure that PIXL is capable of recognizing more than 26 chemical elements. A similar task is performed by the multifunctional SuperCam scanner, which is capable of determining the atomic and molecular composition of rocks from seven meters. For this, it is equipped with a laser and highly sensitive infrared sensors. 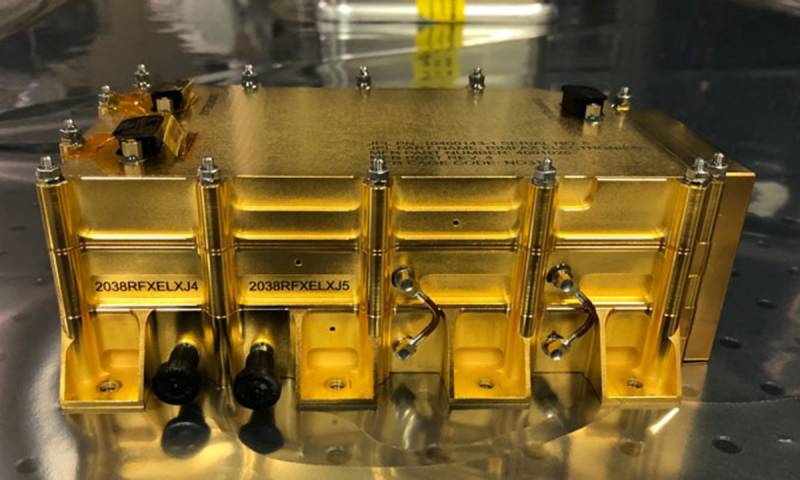 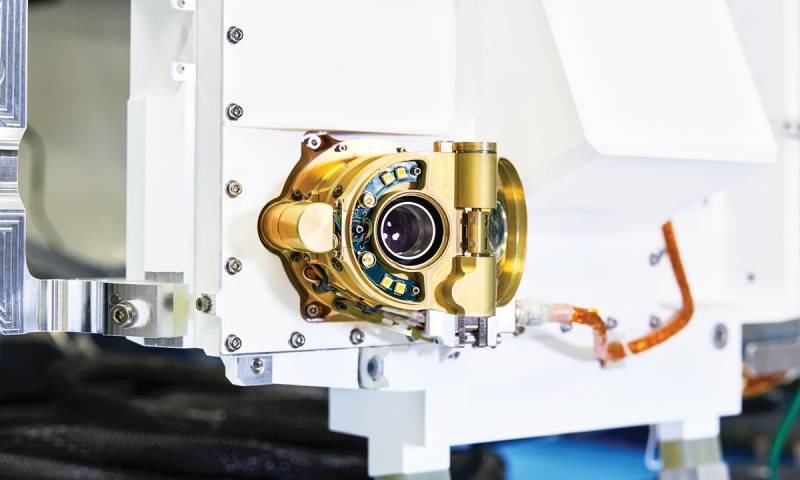 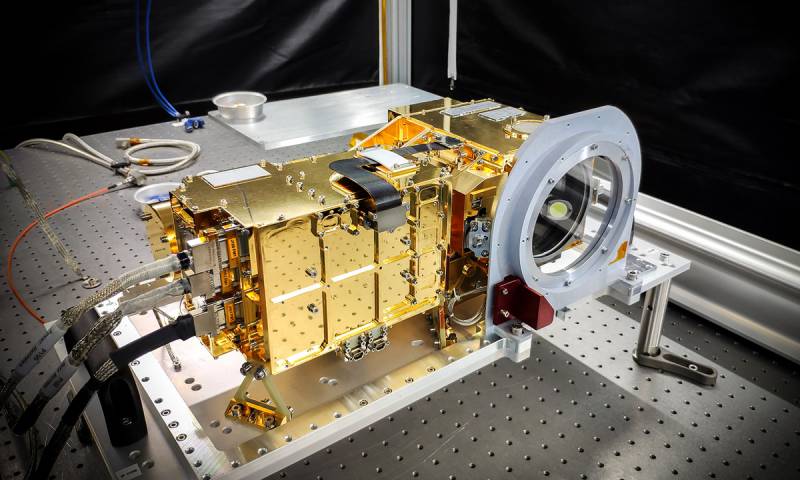 Top to bottom: RIMFAX, SHERLOC and SuperCam. Source: mars.nasa.gov
And that's not all. The analysis for the presence of traces of life is carried out by the "forensic experts" SHERLOC and WATSON. SHERLOC works in the ultraviolet range, probing the surrounding rocks with a laser. The principle is very similar to the work of an earthly sleuth looking for biological evidence with a UV flashlight. WATSON, in turn, captures everything that happens on camera. A pair of sensors along with a PIXL X-ray are located at the end of the rover boom.

Perseverance does not have a drill for exploring the Martian interior. For this purpose, the RIMFAX radar scanner is used, capable of "scanning" Mars to a depth of 10 meters. GPR will map the underlying surface and search for deposits of Martian ice.

The main "show stopper" of Perseverance is not the supergadgets described above and not even a nuclear power plant, but the first in stories an aircraft for Mars. After landing in the Martian crater of Jezero, the rover brought a miniature coaxial helicopter under its belly. In the best traditions of American astronautics, the name for the helicopter was chosen through a competition, and Ingenuity became the best. Posted by Vaniza Rupani, 11th grader from Northport. 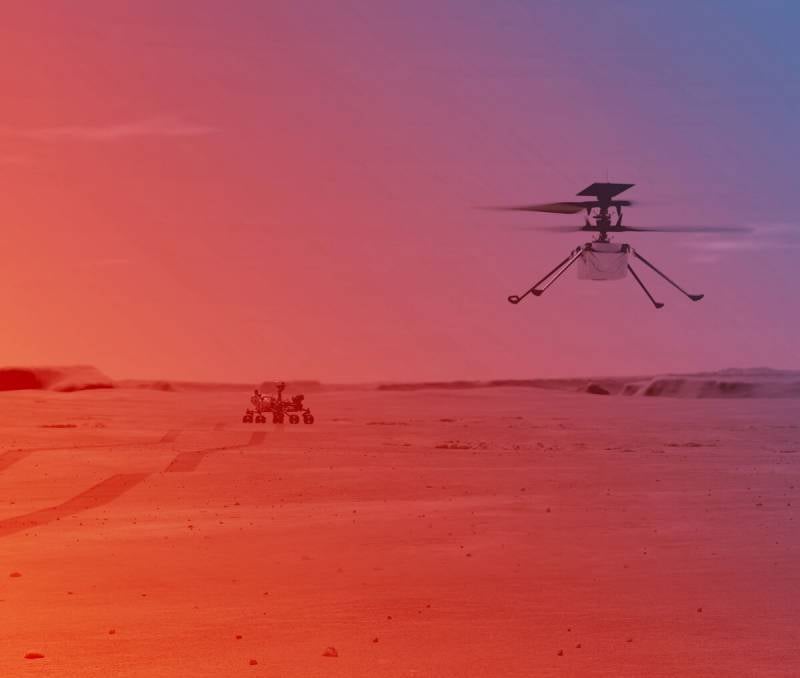 This is how NASA artists see the first flight of a Martian helicopter. Source: mars.nasa.gov 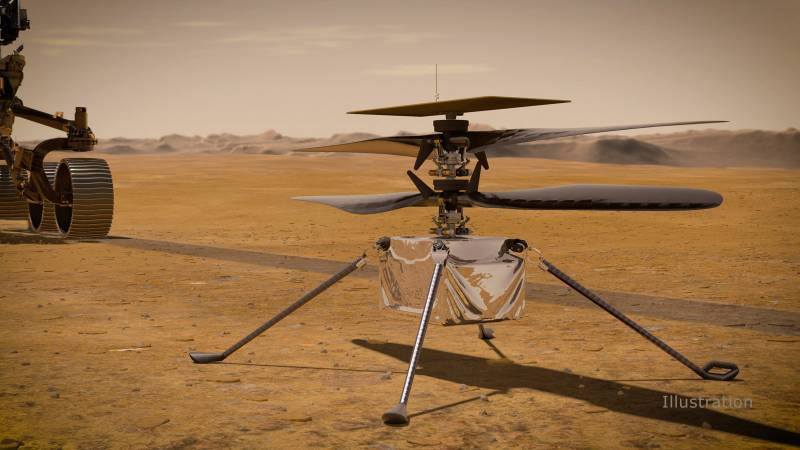 Coaxial Ingenuity. Source: mars.nasa.gov
The helicopter does not carry any scientific equipment. Its main task is to demonstrate the potential for flight in the atmosphere of Mars, which consists almost entirely of carbon dioxide. The atmosphere of the Red Planet is similar in density to that of Earth, but the gravity is 2,5 times less. The aircraft pulls 1,8 kilograms and for its weight is equipped with relatively small propellers (rotation speed - 2537 rpm) - bonuses of Martian gravity. However, the huge temperature drops on the planet's surface forced engineers to build a complex thermal protection system on a helicopter. The first flight of Ingenuity is scheduled for no earlier than April 8, and the entire test program should be completed within a month. The helicopter is disposable - after testing it will remain on Mars as alien debris. Perseverance, too, will eventually turn into a dead piece of expensive alloys, but its life cycle is much longer. 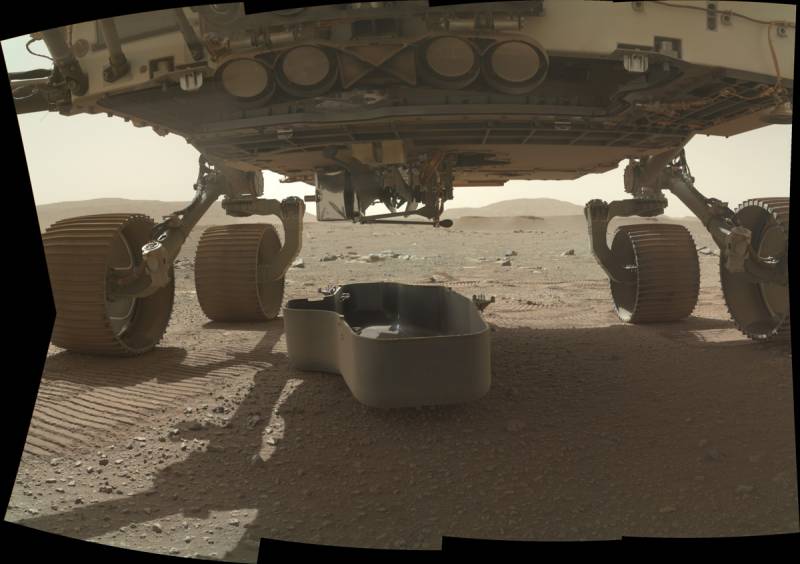 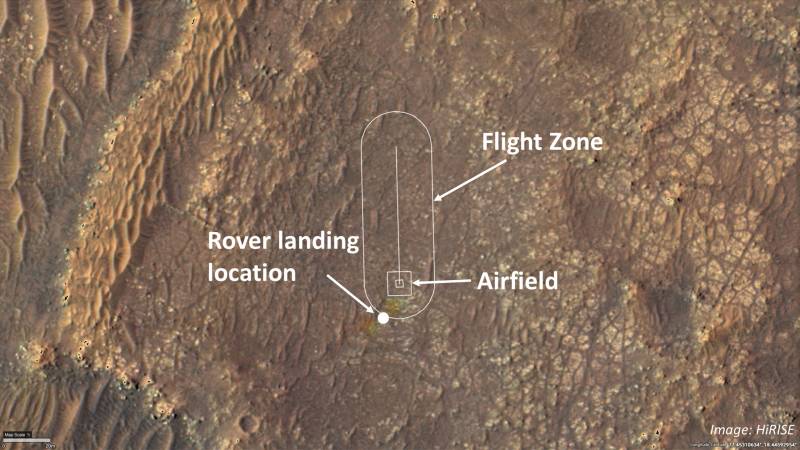 Intended “airfield” for Ingenuity and flight program. Source: mars.nasa.gov
It is assumed that Perseverance will drop its satellite in a guitar-shaped protective container, roll back several tens of meters and remotely launch a test flight program. The helicopter will have to fly around the rover without leaving the surveillance area of ​​cameras and scanners. The hardest part is to survive the first cold Martian night for a miniature helicopter. If you are reading the material before April 8, 2021, then the Martian rover is just moving towards the pre-selected airfield for the Ingenuity launch.