Name and feat on the “hero's desk”. Commemorative project dedicated to the heroes of the border guards 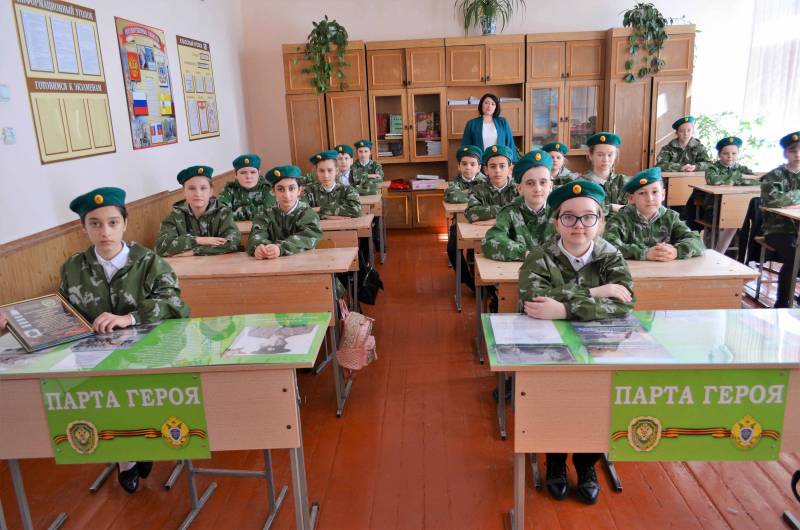 Remember! Through the centuries, through the years - remember!

About those who will never come again - remember!
These lines are taken from the poem "Requiem" written by the famous Soviet poet Robert Rozhdestvensky in 1960.

Human memory is the best reward

Following the poetic words of Robert Ivanovich, in order to perpetuate the memory of the heroes-border guards, the Stavropol regional branch of the Russian Council of Border Service Veterans is actively implementing the seemingly modest, at first glance, memorable project “Hero's Party”. There is no doubt that the project is patriotic. Moreover, the Stavropol land is known for its heroes.

They, who grew up or served in these places, left one day on orders to defend the Fatherland and performed their heroic deeds. Their exploits were reflected in the original, even somewhat unexpected, idea of ​​the "Hero's Desk".

The project was developed by representatives of the Council of Veterans of the Stavropol Territory Border Service. He in an accessible form tells boys and girls about school graduates and fellow countrymen who have performed a feat and have shown personal courage and courage in defending the Motherland. 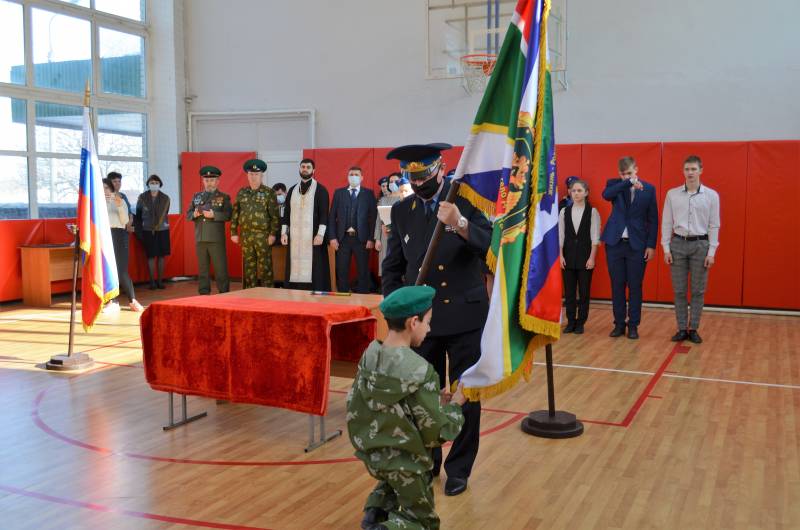 The first four desks were opened in 2020 in several educational institutions of the region.

Each resident of the village of Kazgulak in the Stavropol Territory honors the memory of his fellow countryman - Hero of the Soviet Union, colonel - border guard Ivan Petrovich Barsukov. Veterans of the regional council, together with Major General Pavel Solovyov, presented his exploits in the Afghan war, displayed on the Hero's Party, at the Stavropol Presidential Cadet School and at school No. 18 of the city of regional significance Nevinnomyssk.

And in February 2021, representatives of the Regional Council of Veterans of the Border Guard Service and activists of the Trunovsky Municipal District opened a border class "Sentinels of the Motherland" at school No. 6 in the village of Donskoy, held a ceremony for attaching the banner to the flagstaff and opened the "Hero's Party" by the Knight of the Order of the Red Star border guard Pavel Buravtsev , who died on November 22, 1985 in a battle near the Afghan village of Afridzh. 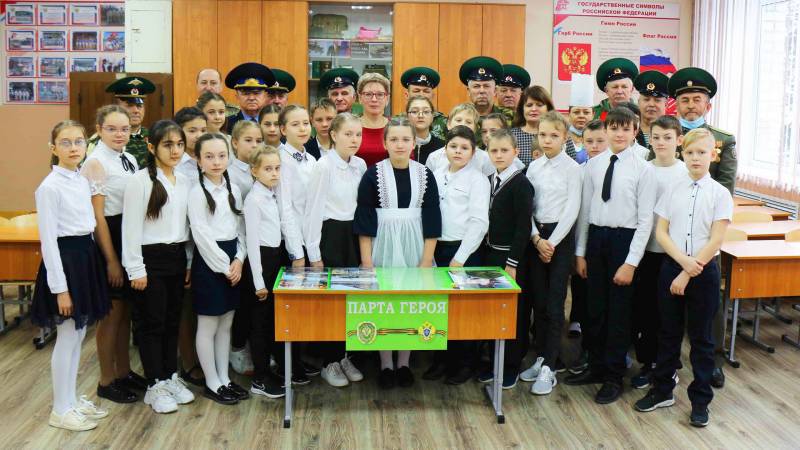 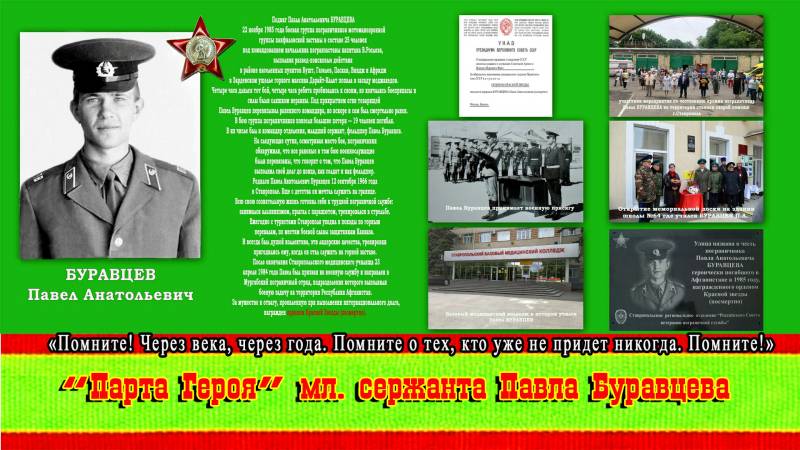 "Hero's Desk" by Pavel Buravtsev found its place in the border class "Sentinels of the Motherland", next to the desk, which reflects the name and feat of the border fighter Stanislav Antonenkov. Its opening took place a month earlier. And now the schoolchildren of the village of Donskoye have two symbols with the names of the heroes and their exploits. It's no secret that this is an additional incentive for boys and girls to study well and be among the best.

Let's not forget anyone

There is no doubt that the veteran border guards of Stavropol have done a huge and important job, and today "Hero's desks" are already in many educational institutions of the region. They immortalize the brave and courageous deeds of border guards and military personnel: 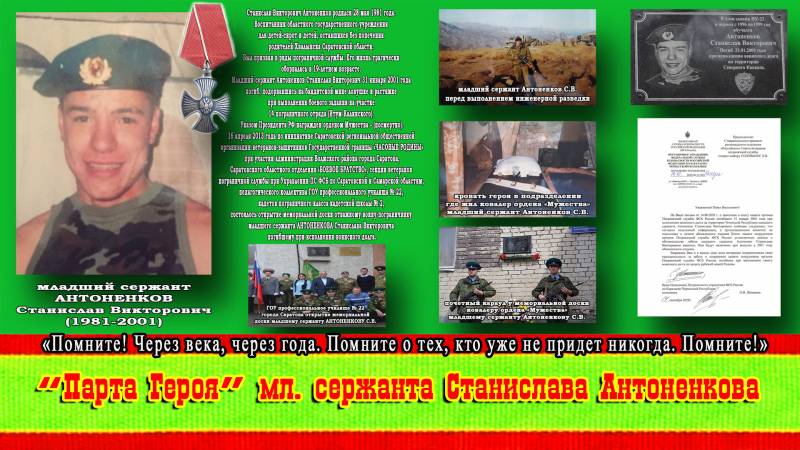 - Commander of the Order of Courage, junior sergeant Stanislav Antonenkov, who died in 2001 while performing a combat mission, being blown up by a booby trap: the Solnyshko children's home, gymnasium number 9 and school number 50 of the city of Stavropol, school number 6 in the village of Donskoye, GKU Orphanage »No. 19 of the city of Novopavlovsk, Orphanage No. 17 of the village of Tolstovo-Vasyukovskoye.

- Hero of the Soviet Union, Lieutenant Pyotr Stratiychuk, who distinguished himself during the Kerch-Eltigen operation in 1943: School No. 1 in the village of Kursavka, Andropovskiy MO. 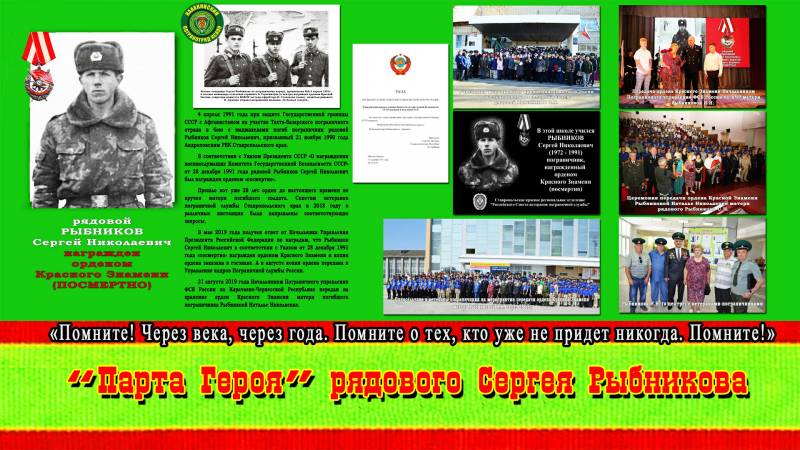 - Commander of the Order of the Red Banner, Private Sergei Rybnikov, who died in a battle on the border in 1991: School No. 1 in the village of Kursavka, Andropovskiy MO. 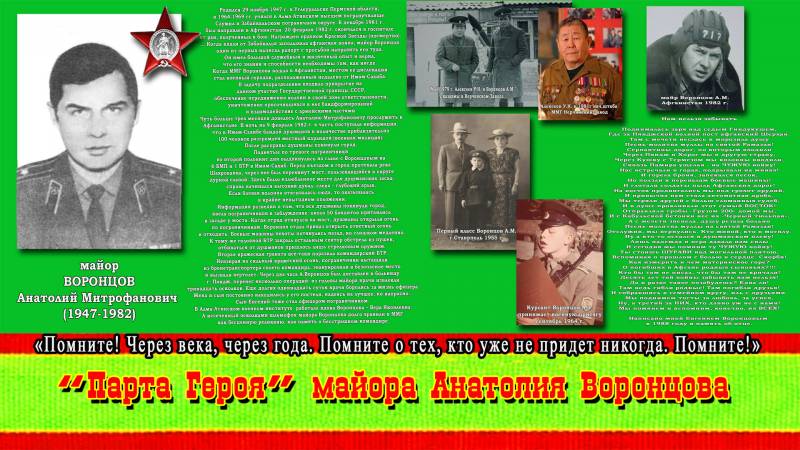 - Chevalier of the Order of the Red Star, head of the motomangroup, Major Anatoly Vorontsov, who died in a battle with dushmans in Afghanistan in 1982: School No. 64 in the city of Stavropol. 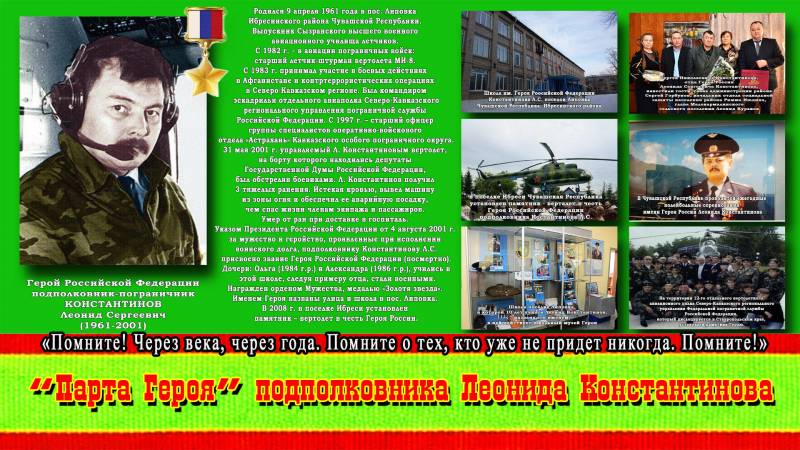 - Chevalier of the Order of the Red Star, Lieutenant Timofei Drobot, who died in August 1944: school number 1 of the city of Izobilny. 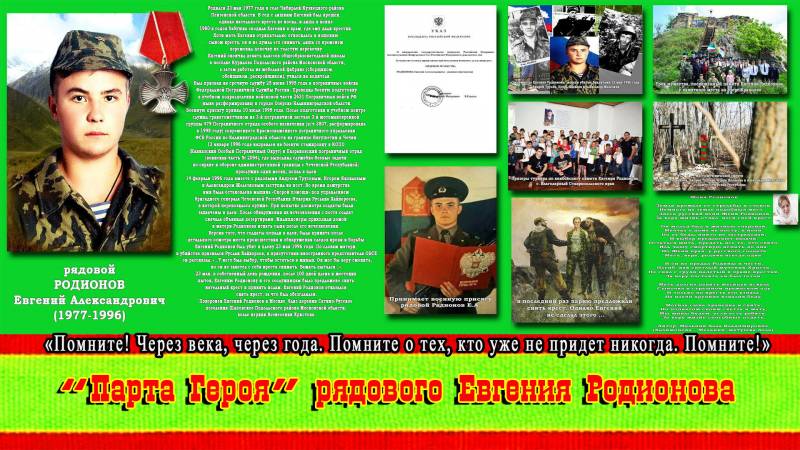 - Chevalier of the Order of Courage, Private Evgeny Rodionov, beheaded in Chechen captivity in May 1996: School No. 1 in the city of Izobilny. 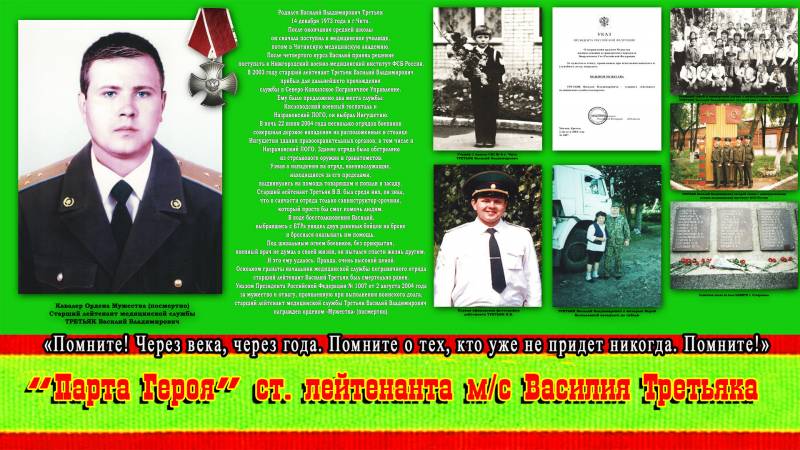 - Chevalier of the Order of Courage, senior lieutenant of the medical service Vasily Tretyak, who died in a battle in the North Caucasus in June 2004: schools No. 44 and No. 20 of the city of Stavropol. 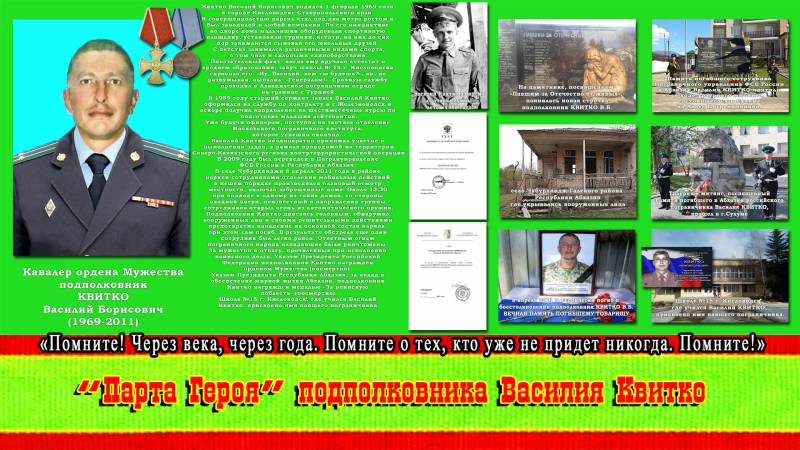 - Commander of the Order of Courage, Lieutenant Colonel Vasily Kvitko, who died in a shootout with saboteurs in the Republic of Abkhazia in April 2011: School No. 15 in the city of Kislovodsk. 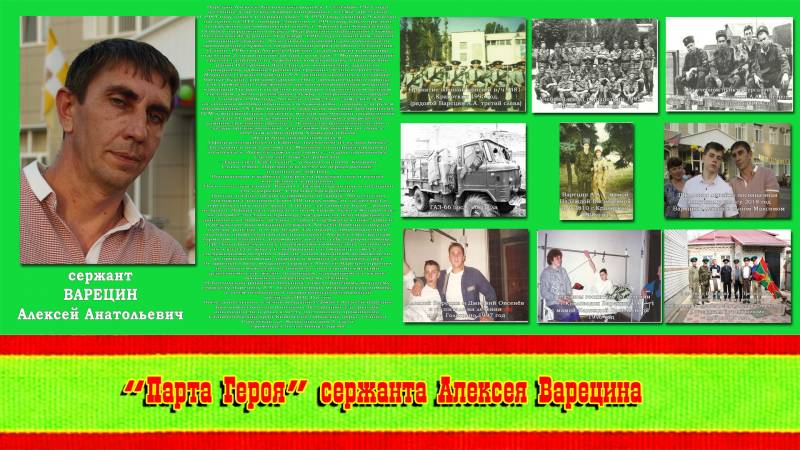 - Participant of the counter-terrorist operation in Chechnya, Sergeant Alexei Varetsin, who distinguished himself in the performance of a combat mission: School No. 3 of the village Sovetskaya, Kirovsky GO.

- Hero of the Russian Federation, Lieutenant Colonel Mikhail Minenkov, who distinguished himself during the counter-terrorist operation in the North Caucasus in October 1999: School No. 18 in the city of Nevinnomyssk. 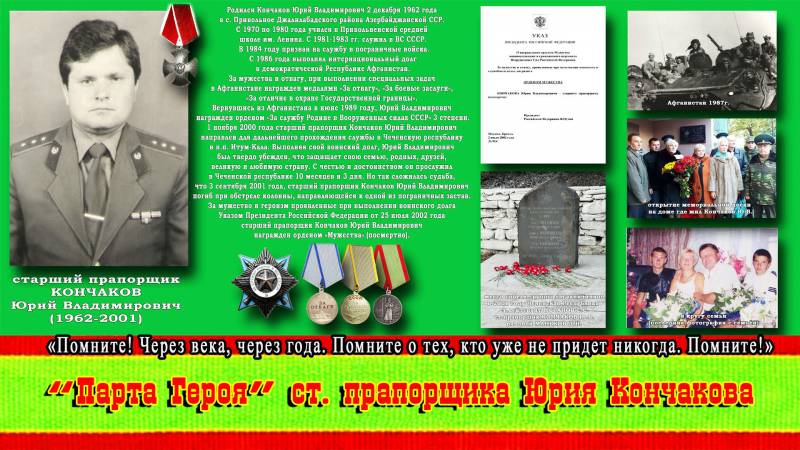 - Chevalier of the Order of Courage, senior warrant officer Yuri Konchakov, who died in battle in the North Caucasus in September 2001: Lyceum No. 35 of the city of Stavropol. 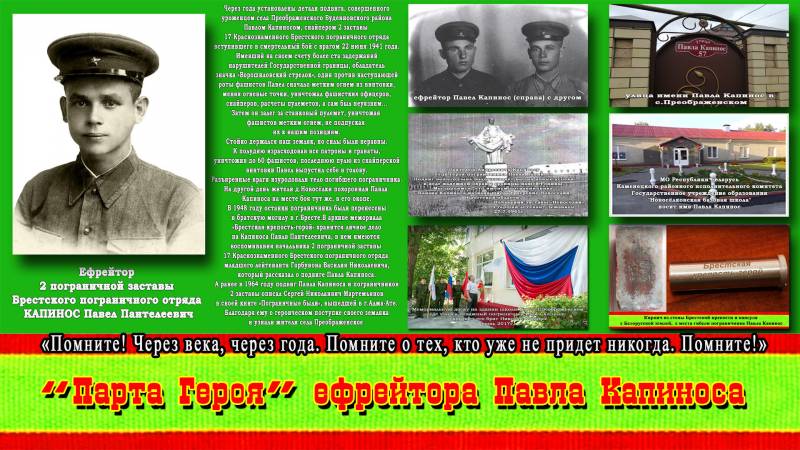 - Private Pavel Kapinos, who killed about 60 fascists and died heroically in the first hours of the Great Patriotic War on June 22, 1941: School No. 15 in the village of Preobrazhenskoye. 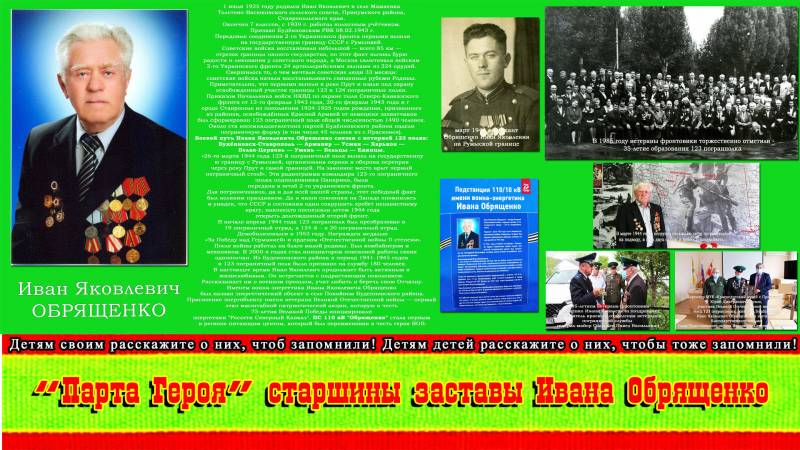 The right to study for the "Hero's Party" is given to activists and the best students of schools. Already in 2021, veteran border guards installed 31 "Hero's Party" in 3 orphanages, as well as 28 schools and gymnasiums in Stavropol.

In preparing the publication, materials provided by the press service of the Stavropol branch of the RSVPS were used.