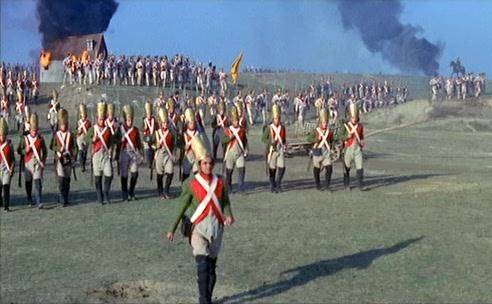 The Russian infantry is attacking. A still from the film "Austerlitz" (France, Italy, Yugoslavia, 1960). Perhaps it can be called the best movie that shows this battle. And the uniforms and ... the fur coats in him are just great

In favor of god Zlata
The edge on the edge of war;
And human blood by the river
On the blade flows Bulat!
People die for metal,
People are dying for the metal!
(Verses of Mephistopheles from Gounod's opera "Faust". Authors of the libretto - J. Barbier and M. Carré)
Greatest battles in stories. In the two previous articles in our series, we examined the uniforms of the allies - participants in the Battle of Austerlitz, Russians and Austrians. And logically, today's material should also be about uniforms. But only their opponents - the French. But ... how much can you do with mentics, dolmen, pantaloons and leggings? They will not run away from us anywhere, all the more so without pantaloons then, and even now no one is at war. So there will be more about the French pantaloons, but for now let's see what forces the allies and their enemy, the Emperor of France Napoleon Bonaparte, had at Austerlitz.

Let's start from the top. Such in the Russian imperial army was the Emperor Alexander I himself, surrounded by his retinue, which, as you know, “makes the king”. During his reign there were suites: Prince Czartoryski and Counts Stroganov and Novosiltsev - all secret advisers. Prince Volkonsky was the adjutant general of the emperor and acted as the general on duty, and Count Lieven was in charge of the Military Campaign Office, Lieutenant General Count Arakcheev (where without him!) Was also with the emperor's person and was listed as an inspector of the Russian artillery, engineer-general Sukhtelen ruled the suite His Imperial Majesty was in charge of the quartermaster's department, and Chief Marshal Count Tolstoy was in charge of supplies. 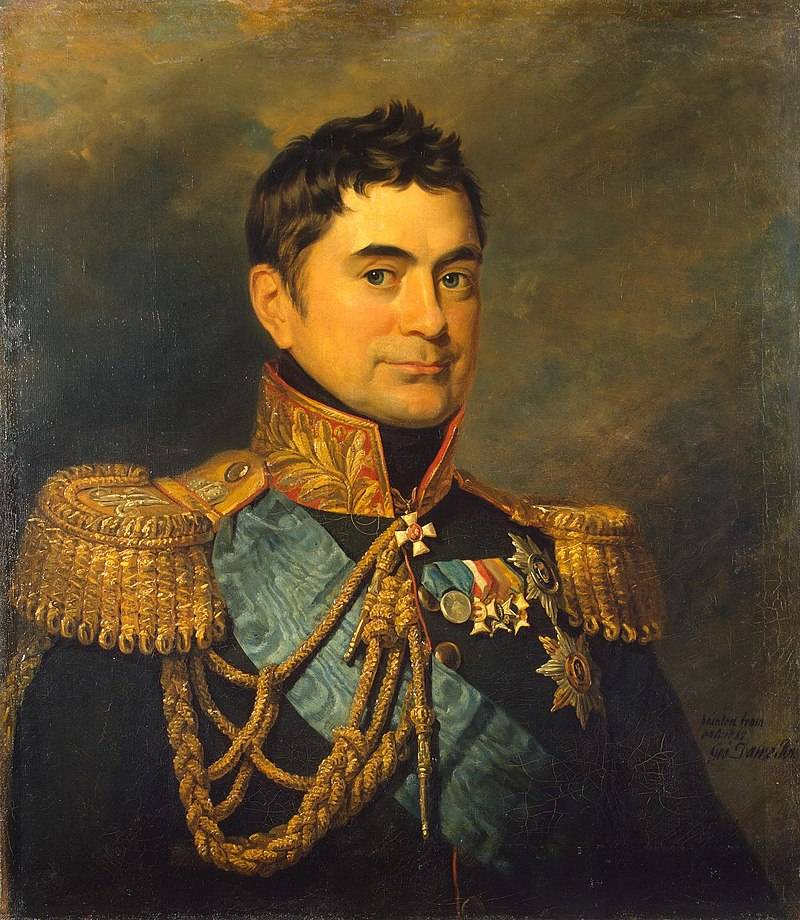 Portrait of P. M. Volkonsky by George Doe. Military Gallery of the Winter Palace, State Hermitage Museum, St. Petersburg
General of Infantry MI Kutuzov was considered the commander-in-chief, and there were two quartermaster generals at once: Major General Franz von Weyrother and Major General Gerard 1st. The first represented the Austrians, the second - the Russians. Artillery at Kutuzov was commanded by Lieutenant General Baron Meller-Zakomelsky, and Major General Glukhov was in charge of the engineering troops. 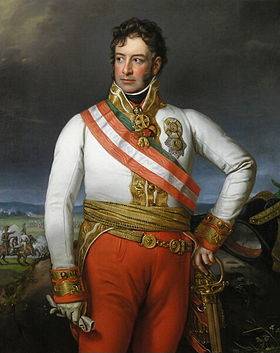 Field Marshal-Lieutenant Prince Karl Philip Schwarzenberg. Unknown artist. Cesky Krumlov Castle
On November 17 (29), 1805, the allied troops, leaving the Great Olmüts road, went around Brunn, moving through Austerlitz. We walked slowly, getting bogged down in mud on country roads and periodically dispersed in search of fuel and provisions. Well, about where their enemy was, there were only very vague ideas, although the Russian-Austrian army was on its territory and simply had to have good intelligence and agents.

The offensive plan was developed by Major General Franz von Weyrother. And here the question immediately arises: why is he? Just because he did maneuvers here the year before? And although there were enough generals at the headquarters of Emperor Alexander and under the command of the Kutuzovs, that is why they were entrusted with drawing up this plan, approved by both monarchs. In our literature, they like to write about the fact that Emperor Alexander was under the influence of the Austrians. But why was he under it? For youth or stupidity? And why did not his retinue and those of his ilk dissuade him from this influence? After all, after Ulm, something was hard to believe in the general genius of the Austrian generals. And there were more Russians in the allied army than Austrians. But, nevertheless, for some reason Weyrother ... Moreover, when Weyrother on the night of November 20 (December 2) at a meeting at headquarters with the chiefs of the columns read out his disposition, then when asked by one of them about what would happen if the French attacked Allied troops on Prazen Heights, the Quartermaster General replied: “This case is not foreseen". Moreover, the translation of his disposition into Russian was completed only in the morning, and the commanders of the columns received it even later, at 6 o'clock in the morning. 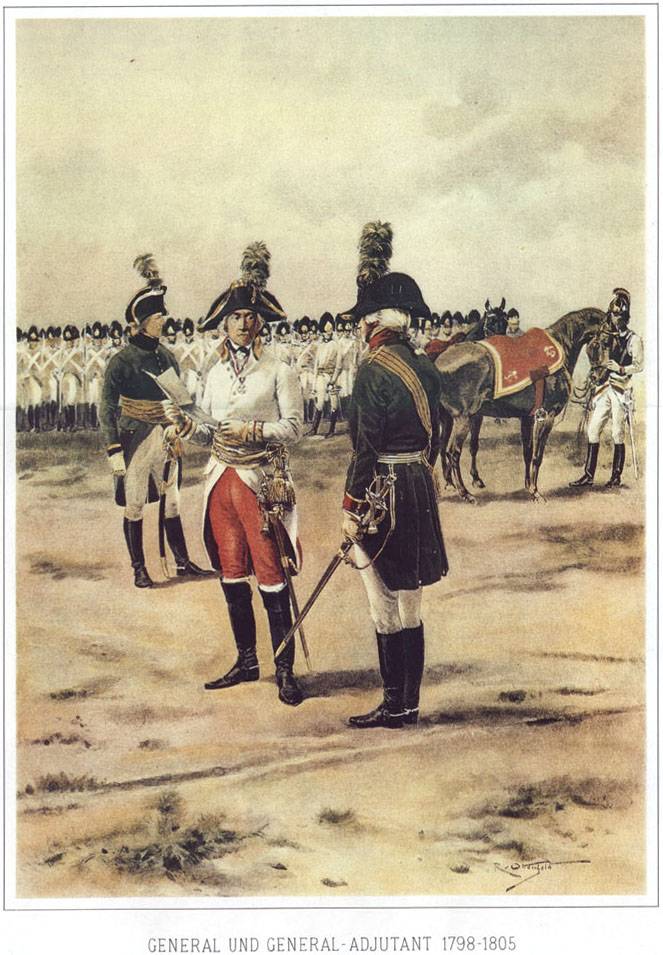 General and Adjutant General of the Austrian Army. Artist Richard Knötel (1857-1914). Military History Museum, Vienna
Everyone writes that Alexander disliked Kutuzov. But why? Because he knew about the impending attempt on his father and did not report it? Or, on the contrary, he knew and reported, but there was no need to report? But Kutuzov ... could have gone to the emperor, criticized Weyrother's plan and ... even put his sword at the feet of the beloved emperor. Like, my gray hair does not allow me to bend my soul and all that stuff ... But I didn’t do it. He preferred the role of a stupid campaigner, although he was the commander-in-chief. In short, there are so many "why" and so many secrets in all this that it is simply impossible to unravel this tangle today. One can only state: it was like this, but it was like that ...

It is interesting that L. Tolstoy in "War and Peace" in the words of Prince Andrei wrote about the same:

“But was it really impossible for Kutuzov to directly express his thoughts to the sovereign? Can't it be done otherwise? Is it possible for court and personal considerations to risk tens of thousands of my, my life? " He thought.
In general, it turned out as it is written by Tolstoy: “Die erste Kolonne marschiert ... die zweite Kolonne marschiert ... die dritte Kolonne marschiert ...”[1] And no one dared to prevent this. Didn't even try! And it only says that our generals, so brave on the battlefield, were more afraid of ... their own than the enemy. And this is very sad. There was one who was not afraid, because by that time he was already in the grave for a long time, and no one else dared to follow his example. Ranks were clearly more expensive than honor, alas.

But what were all these columns, what was their structure and strength? Well, now we will find out about this too. 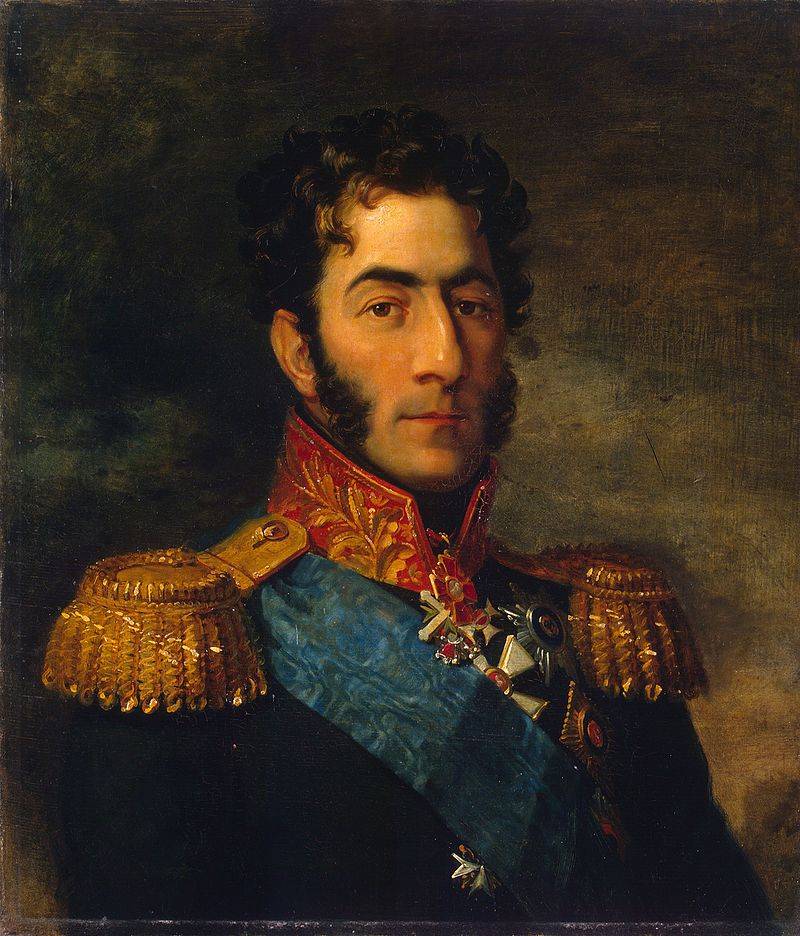 Portrait of Lieutenant General Prince P.I.Bagration by George Doe. Military Gallery of the Winter Palace, State Hermitage (St. Petersburg)
In the Russian army near Austerlitz, the vanguard was allocated as a separate detachment, commanded by Lieutenant General Prince Bagration. According to some reports, there were 11 soldiers in it, including 750 horsemen with 3000 guns, and according to others (edited by the Eksmo publishing house) - 30 people and 13 guns, Russian and Austrian. 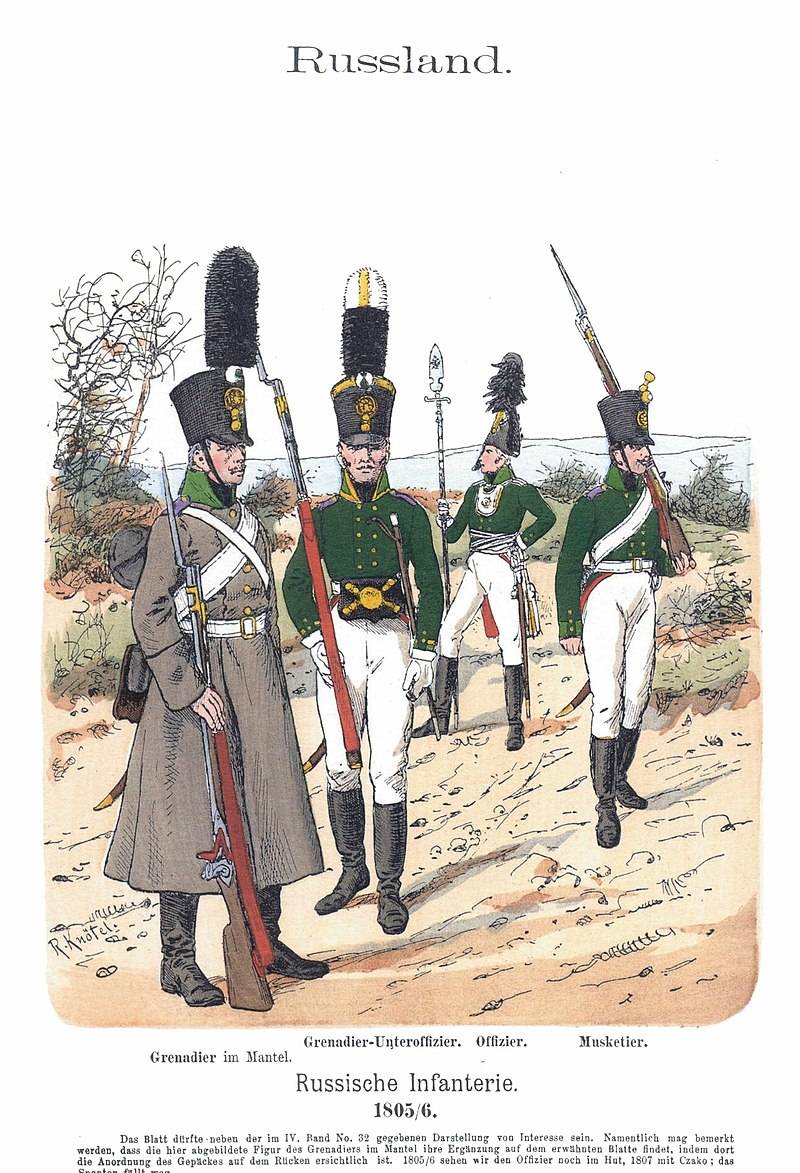 Russian grenadiers on the left and fusilier on the right, 1805-1806 Artist Richard Knötel (1857-1914). Military History Museum, Vienna
A separate detachment was the Russian Guard under the command of the Grand Duke Constantine: 8500 people, of which 2600 were cavalrymen with 40 guns, although, according to Russian sources, more than 10 people! 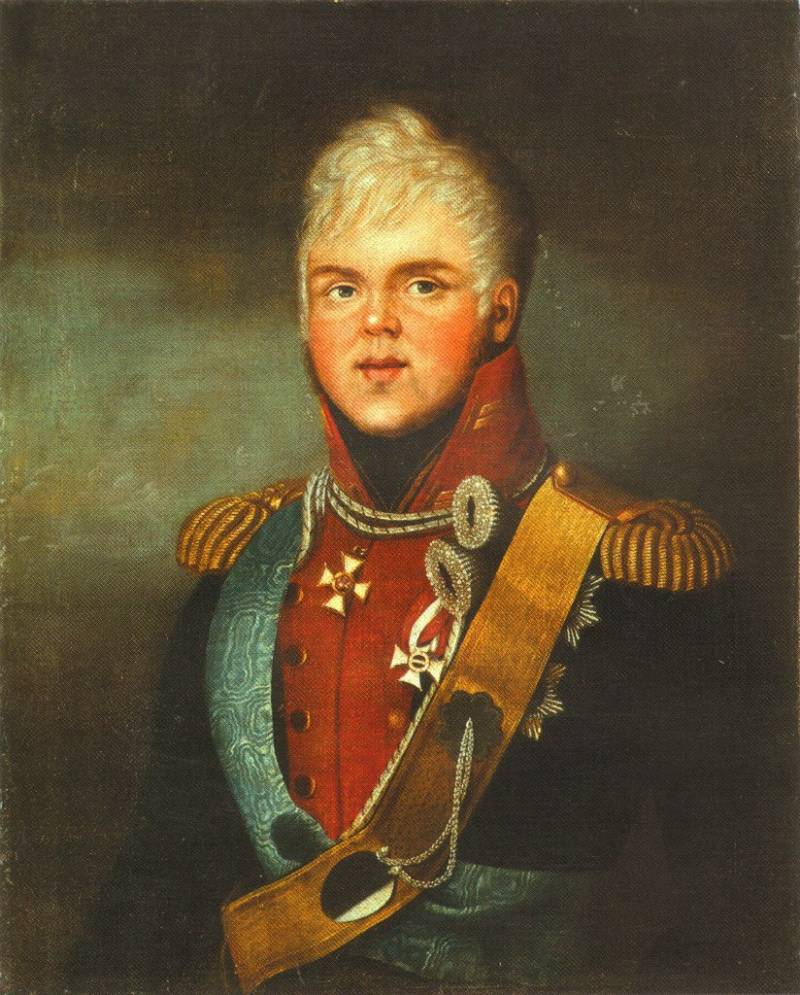 Portrait led. book Konstantin Pavlovich. Unknown artist. 1807-1809 State Memorial Museum of A. V. Suvorov, St. Petersburg
The Austrians also had a vanguard under the command of Field Marshal-Lieutenant Baron Kienmeier: about 5000 people, 1000 horsemen, two of our Cossack regiments of 500 Cossacks and 12 cannons. 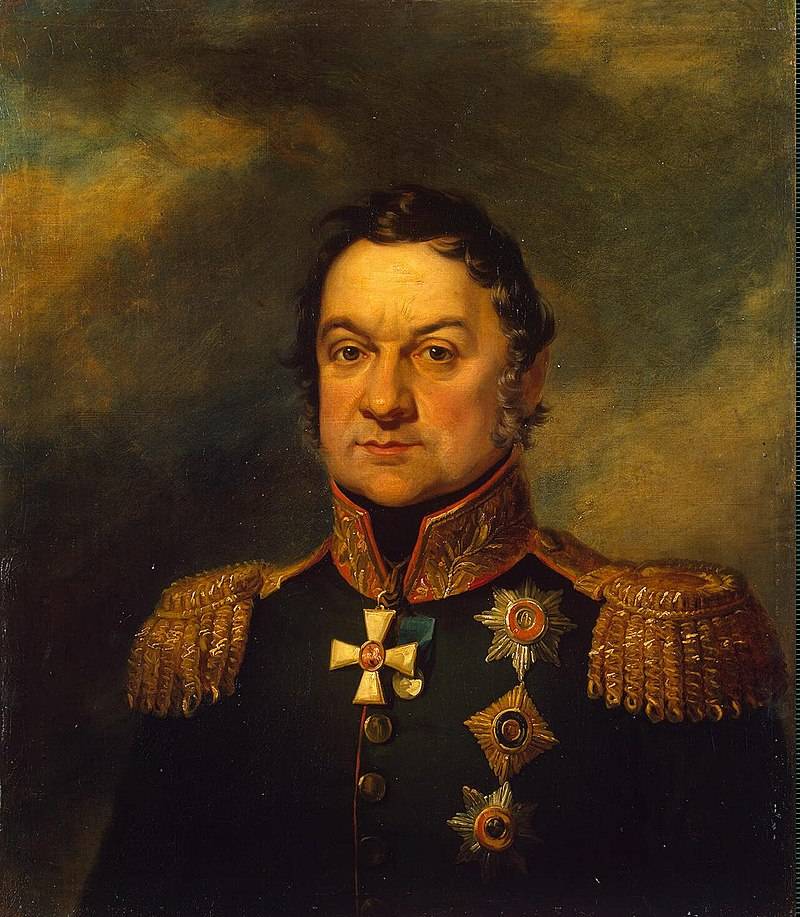 Portrait of Lieutenant General D.S.Dokhturov by George Doe. Military Gallery of the Winter Palace, State Hermitage (St. Petersburg)
Lieutenant General Dokhturov commanded the first of the famous "Weyrother's columns". Under his command were the following forces: 7752 people (according to other sources, 13600!) And 64 guns. 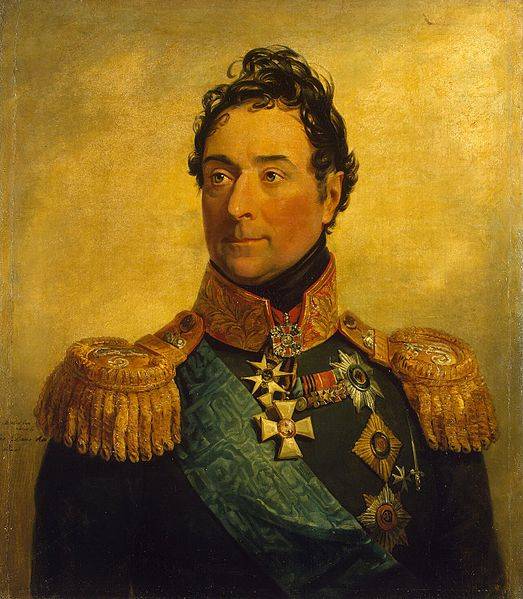 Portrait of Lieutenant General Count AF Langeron by George Doe. Military Gallery of the Winter Palace, State Hermitage (St. Petersburg)
The second column was commanded by a Frenchman in the service of the Russian army, Count Langeron, also in the rank of lieutenant general: 10 people, including 283 horsemen and 360 cannons. According to other sources, he had more people: 30 11!

The third column of Lieutenant General Przhibyshevsky: 5448 (7770) people with 30 guns.

The fourth column was commanded by two: the field assistant Count Kolovrat from the Austrians and Lieutenant General Miloradovich from the Russians. She numbered 12 099 people (16 190) with 76 guns. 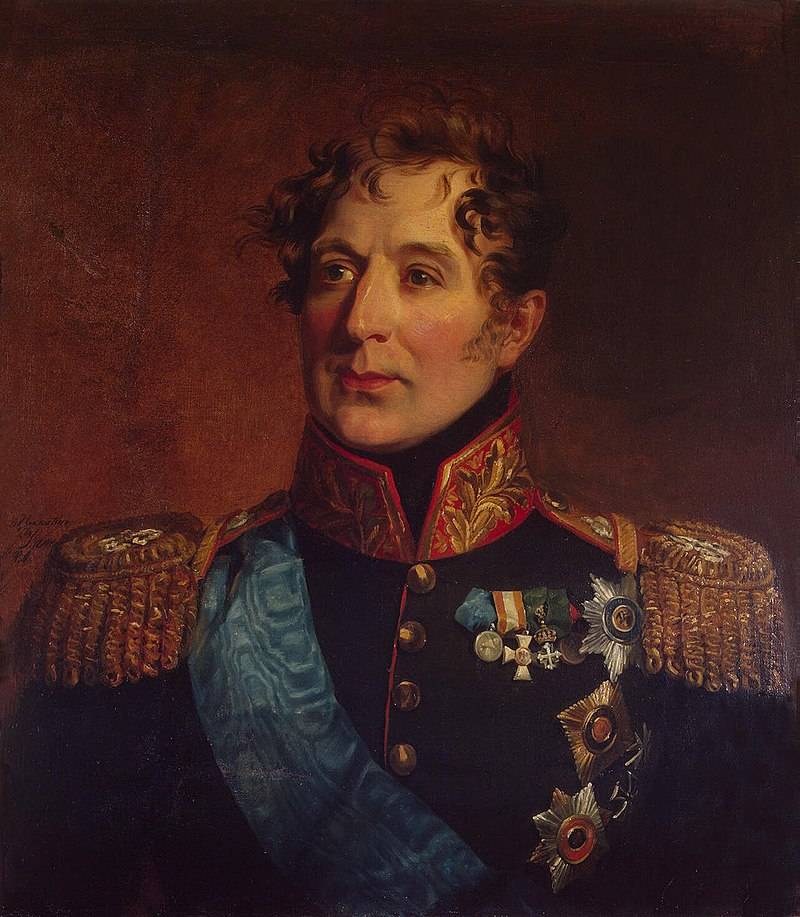 Portrait of M. A. Miloradovich by George Doe. Military Gallery of the Winter Palace, State Hermitage Museum, St. Petersburg
The fifth column was subordinate to Field Marshal-Lieutenant Prince of Liechtenstein and numbered 4622 cavalrymen with 24 guns, and according to the Eksmo edition - 5300 and 18 guns. 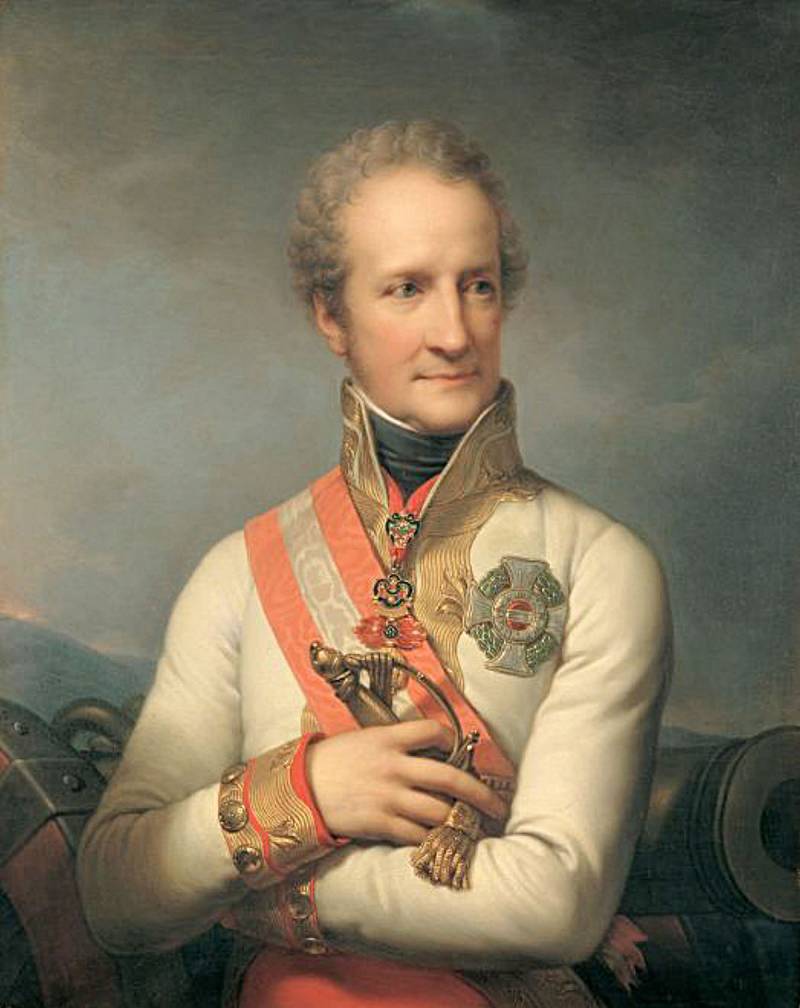 Johann von Lichtenstein, 1816 In the battle of Austerlitz, he commanded the 5th column, which consisted entirely of cavalry. His troops fought well, although they could not save the allied army from defeat. Johann Baptist von Lampi the Elder (1751-1830). Liechtenstein Museum, Vienna
Thus, the total forces of the Russian-Austrian army before the battle of Austerlitz were as follows: 72 789 people, of whom there were 14 139 cavalrymen, and 318 guns in total. But there is evidence that the total number was even about 85 thousand people!

PS Some of the VO readers complain about the paucity of sources on the topic raised. Well, perhaps, for this case, we can recommend this highly interesting publication: Mikhailovsky-Danilevsky Alexander Ivanovich. Description of the first war between Emperor Alexander and Napoleon in 1805. Publisher: Type. Headquarters of the Separate Corps of the Inner Guard. Place of publication: St. Petersburg. Year of publication: 1844. Number of pages: 304 p.

True, it was written, alas, with Yaty and Fita. However, it is from him that both our Russian and foreign authors usually draw all the details about this battle. It is also valuable because there are also maps, although they are given on too small a scale.