How the British government wanted to survive a nuclear war

March 28 2021
58
In the first decades of the Cold War, when it became clear that the USSR, albeit totally inferior in those years in the number and growth rate of its nuclear arsenal, nevertheless had a serious retaliatory strike potential, and this potential due to qualitative growth (emphasis on ballistic missiles) is growing rapidly, Western countries have taken care of how to minimize the consequences of strikes, at least for the leadership of the countries. After all, then they planned to start first, although it is not a fact that if something happened, they would be the first to start - the concept of a preemptive strike by the Soviet military leadership was never rejected. And the Russian, as we know, too.

On the seas, on the waves, now here, and tomorrow there ...

The system of the CPSU - air command posts did not exist in those years, it will appear later, in the second half of the 60s and beyond. There was no equipment that could fit into the planes of that time and provide stable communications and combat control. There were no suitable aircraft yet, and most importantly, there was no particular need. The extremely low accuracy of the then delivery vehicles, albeit compensated by the excess power when hitting area targets, when hitting buried protected targets, was the determining factor why the then ICBMs, SLBMs or MRBMs were ineffective against such targets. The issue with mobile command posts was resolved differently.

The Americans, as part of the NECPA (National Emergency Command Post Afloat) program, built two floating emergency command posts for the leadership. One was the Northampton CC-1 ("Northampton"), that is, the "command ship". It was originally an early post-war Oregon City-class light cruiser, completed as a command light cruiser, and then rebuilt as a command post for military and political leadership. The second ship was the SS-2 Wright, originally a Saipan-class light aircraft carrier. The second ship was equipped especially on a grand scale: the size of the aircraft carrier made it possible to accommodate a lot of powerful and voluminous equipment there, to equip a bunch of premises for the headquarters and management, and the maintenance personnel could be taken fairly. There were about 200 communications specialists alone. It was used as a base for helicopters and even an unmanned helicopter, unique for the early 60s, with an extended antenna for ultra-long-wave radio communication! There were plans to turn one of the first US nuclear submarines into a third "command ship", but they did not grow together. The scenario of their use assumed the evacuation of the leadership on them during the crisis period, before the start of a possible war, and not at the very beginning. But even in the "Caribbean Crisis" there was no leadership on them, although the "Northampton" was prepared to accept it. 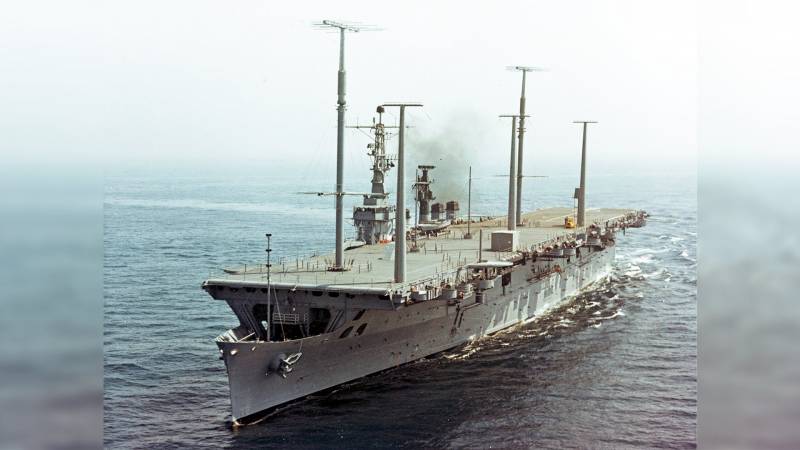 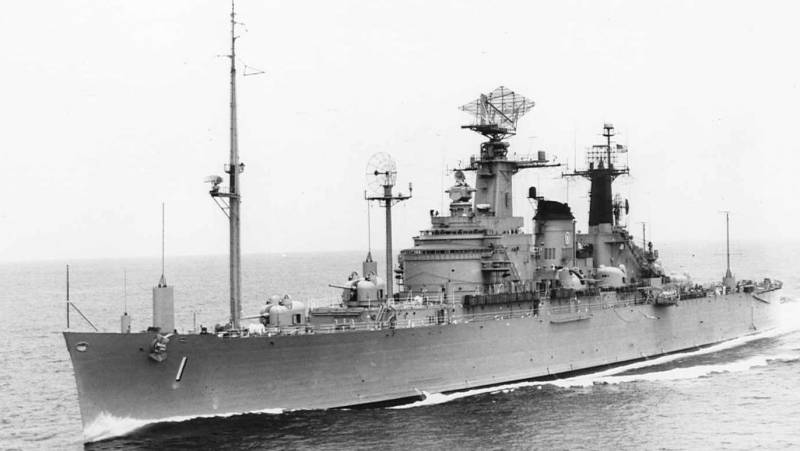 SS-1 Northampton in 1959
These ships were rarely used for their intended purpose, although Presidents Kennedy and Johnson visited them on exercises and even occasionally spent the night. After 1970, they were taken to the reserve, and in 1977-1980. - disposed of. The era of the CPSU has come. By the way, the first VKP in the United States, EC-135J Night Watch, although it entered the service back in 1962, was unsuccessful and could be in the sky for a fairly limited time.

And what about London?

And how did the leaders of the United Kingdom plan to survive the nuclear war in those years, which at that time was still a very powerful state? In the Cold War, the British government's survival plans are indeed divided into 3 main phases. The first, which lasted until the early 1950s, involved the widespread use of antiquated World War II hideouts in London, such as the Admiralty Citadel, Cabinet War Rooms and other similar hideouts.

It was then assumed that a relatively small amount of atomic weapons, single ammunition (the USSR then had much less bombs than the West thought, and Britain might simply not have enough then) with limited accuracy and destructive potential, and that this was not an unreasonable assumption that absolutely most of Great Britain would survive. To this end, London will continue to function in one form or another as the capital, and most of the government will remain, albeit hiding in shelters and other unaffected areas of the city.

Since the mid-1950s, with the introduction of hydrogen bombs and ballistic missiles, ammunition has grown and delivery accuracy has increased - it has become clear that there is little chance of London surviving a nuclear attack, and that the government will be destroyed in these old vaults. ... British planning then focused on a dispersed system of government headquarters, using many obsolete bunkers and several other facilities, including WWII underground factories, and each headquarters would have to govern its own region. More precisely, with what was left of it. Each region would have an empowered (usually a senior minister) and supported by various branches of government to oversee survival and recovery (there were such hopes).

This form of regionalized governance lasted until the end of the Cold War, and as unfashionable as it may sound, the UK was actually pretty well organized (the British think so, the Russians had a different opinion) when it came to work planning. local, regional and central governments in World War III. Over time, it became clear that huge efforts were made throughout the country to build all kinds of scattered protected facilities of various levels. It is unlikely that this would have saved the British from defeat, but their plans were more elaborate than those of the same United States in the same years, although they were not suitable for the planning of the USSR in this matter and its allies.

Korsham - how to make something useful from an old aircraft factory

And what about the very central authority of the Kingdom? From the mid-1950s to 1968, the plan was simple - the government was to land en masse at the facility in Corsham, known by various names, including STOCKWELL, TURNSTILE, BURLINGTON, EYEGLASS. 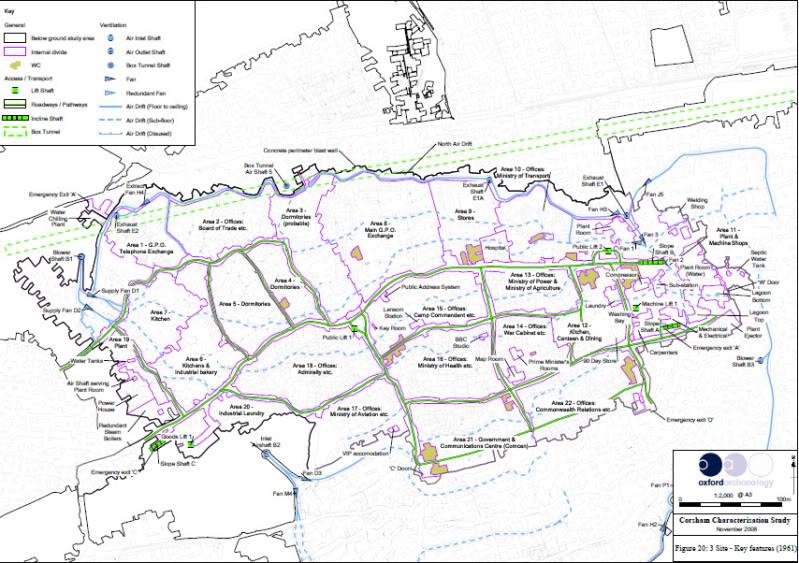 Object Korsham, plan of structures
In peacetime, this place was not "inhabited", its location was classified, and only a tiny handful of people knew the true nature of what was happening there. Well, of course, they thought so in London, but in Moscow they knew that the "Cambridge Five" and our other intelligence officers worked very effectively. Extensive plans have been drawn up that, if increased activity, government departments will be mobilized to travel to the Korsham site according to carefully crafted plans. Upon arrival, office blocks and telephone numbers were arranged in advance - now you can look in the former top-secret telephone directory and find out the exact room number and extension number required to contact the First Sea Lord or Prime Minister. The site, formerly an underground aircraft factory during World War II, was located in old quarries and was huge. At least, he was so for those years. It had enough space for about 4000 people to live in relative comfort, had many canteens (including one for senior civil servants and a women's canteen), a hospital with an operating room, several office blocks, and a vast array of communications that allowed the British government to conduct war. 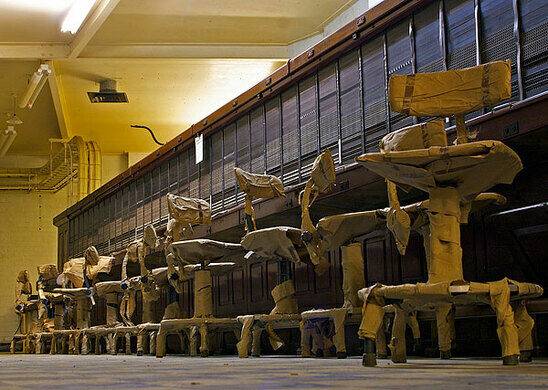 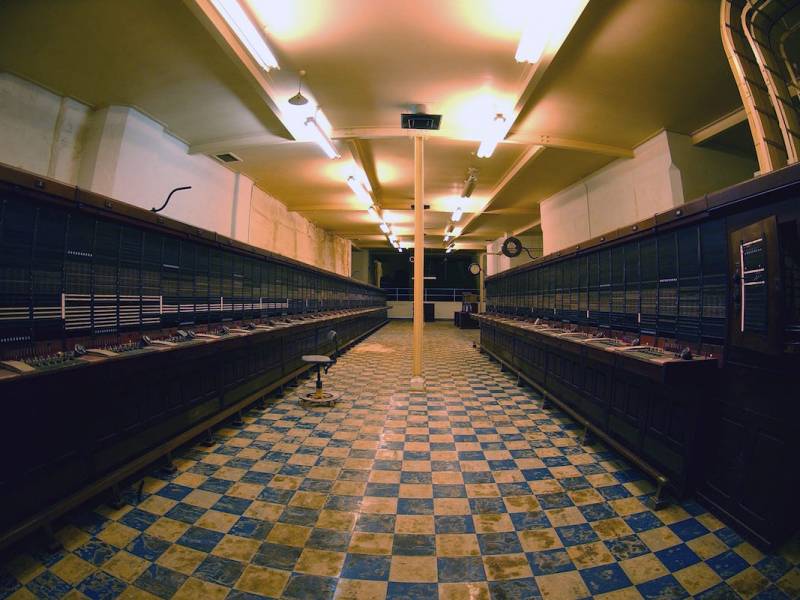 A couple of photos from the facility in Korsham
Korsham was an excellent central headquarters for the government in terms of convenience, but it was also a very vulnerable target. In the event of a general war, at the moment when he went on the air, he would transmit signals and would be easily detected (if we forget that Moscow already knew about him). It would probably have been destroyed right at the beginning of the war, because it was not so deeply buried. Yes, and it is not necessary to destroy such an object completely - the later tactics of dealing with super-protected large bunkers involves striking all possible reconnoitered exits from the object, which would lead, if not to destruction, then to the immuring of those who were there forever and ever, and without communication - already after a few blows, it would hardly have survived. True, at the time when this Korsham was the main object, the warheads did not yet provide the required accuracy.

But it was much easier to destroy Korsham, and in the second half of the 60s, they realized this in London. A different solution was required, and the British thought they had found it. But more on that in the second part.