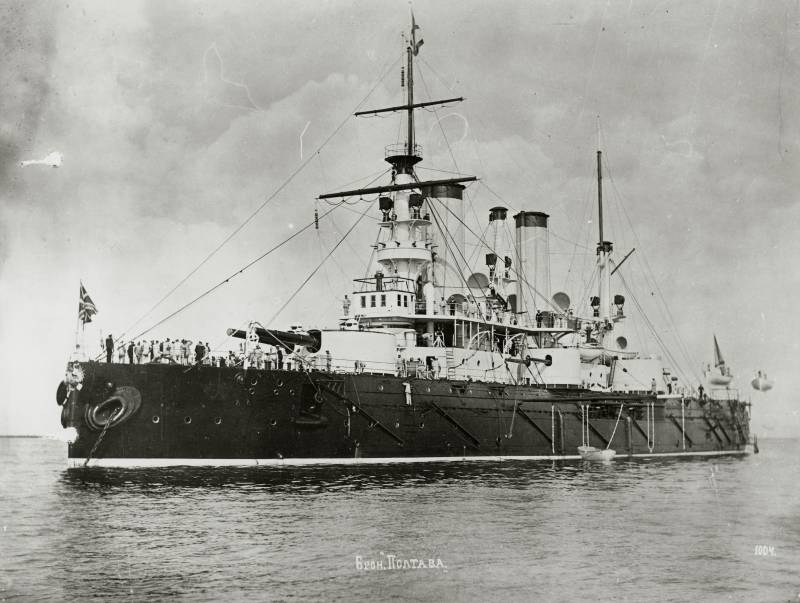 This article, alas, will not give unambiguous answers to the questions posed, but will offer the respected reader a consistent hypothesis about the content of explosives in the so-called "lightweight" 305-mm high-explosive and armor-piercing shells that our fleet used in the Russo-Japanese War.

And what is the difficulty?

The problem is that there are no reliable figures for the content of explosives in the above-mentioned shells, and publicly available sources give very different figures. For example, the well-known Internet encyclopedia navweaps gives the following data: 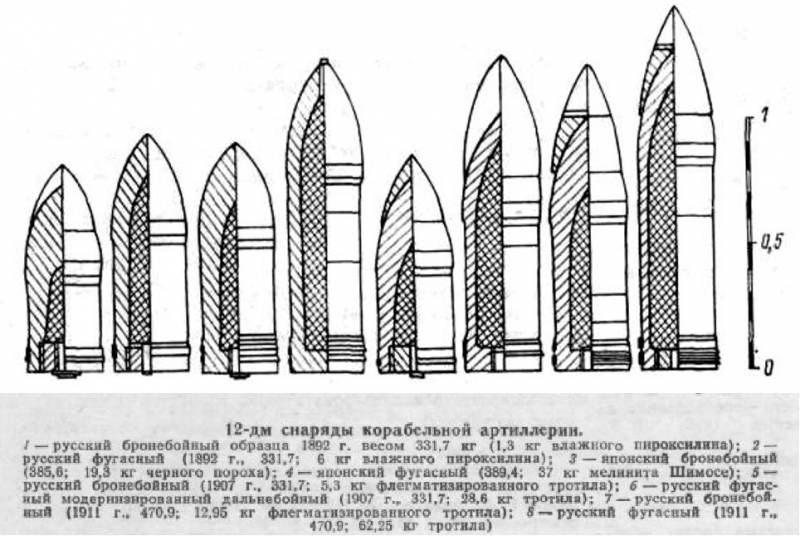 Official documents only add intrigue. "The attitude of the Naval Technical Committee to the Chairman of the Investigative Commission in the Tsushima battle case" (hereinafter - "Attitude") dated February 1, 1907 indicates that the weight of the explosives in the high-explosive 305-mm projectile, which the battleships of the 2nd Pacific squadron were equipped with, was 14,62 , 5,99 lbs or about 0,40951241 kg (in Russian pounds it was 1,8 kg), which roughly corresponds to a percentage of explosives of XNUMX%. 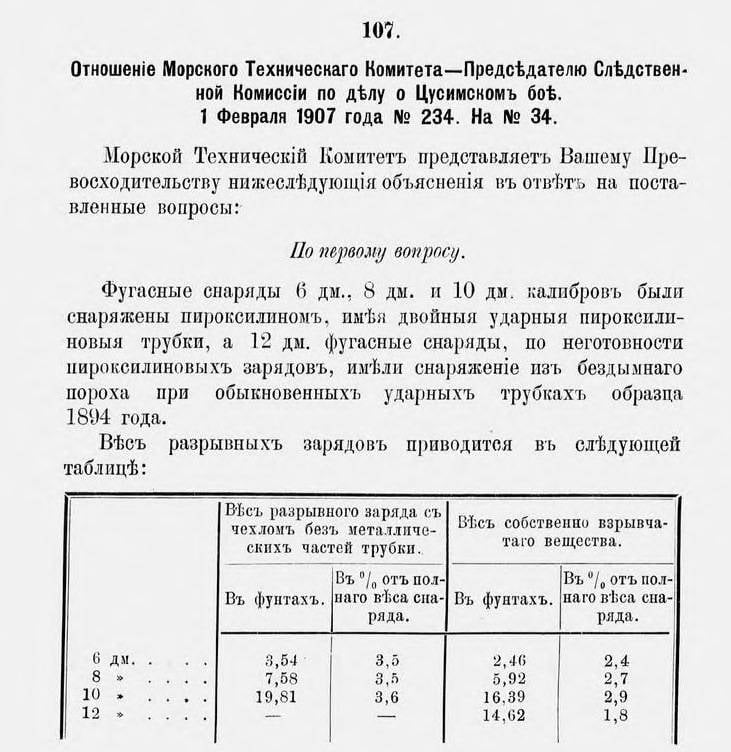 But in the text of this document itself, a completely different percentage of the content of explosives is indicated - 3,5%.

Well, how do you order all this to be understood?

About the density of explosives

The dear reader, no doubt, knows that any explosive has such a characteristic as density, measured in kilograms per cubic meter or - in grams per cubic centimeter (in this article, I will indicate the density values ​​in g / cubic cm). And, of course, the content of explosives in each specific projectile depends on it. After all, the projectile is, in fact, a metal "case" for explosives, in which a certain volume is provided for filling it with explosives. Accordingly, if we take two absolutely identical projectiles with identical fuses, but fill them with explosives of different densities, then the volume that these explosives will occupy will be the same, but the mass of the explosives is different.

What am I leading to?

The thing is that the same Russian shells could be equipped with completely different explosives.

So, for example, high-explosive lightweight 305-mm shells, which we fought in the Russo-Japanese War, sometimes referred to as shells of the "old model", sometimes - "arr. 1892 ", and sometimes not at all, it was originally planned to equip with pyroxylin. Yes, in fact, it was done that way. But in those cases when there was not enough pyroxylin, they were equipped with smokeless powder - these were the shells that the 2nd Pacific squadron was equipped with. However, I came across indications that subsequently, unused projectiles of this type with pyroxylin (and, perhaps, powder) filling were re-loaded with trinitrotoluene (TNT). This looks extremely logical. The shell itself was in five minutes the pinnacle of foundry, and it was irrational to send old shells to be melted down. But to give it additional lethality by equipping it with more advanced explosives is a very correct thing.

Indirect confirmation of all this is contained in the "Album of shells of naval artillery", published by A.N.IM.I. in 1934 (hereinafter - "Album"). Let's consider this using the example of a high-explosive 254-mm projectile.

So what's with the ten-inch?

According to "Attitude", the fragments of which I quoted above, the 254-mm high-explosive shell of the Russo-Japanese War era was equipped with 16,39 pounds of pyroxylin packed in a case, and the mass of explosives together with the case was 19,81 pounds. The Russian pound, as I already reported above, was 0,40951241 kg, from which it follows that the mass of the cover was 1,4 kg, and the mass of pyroxylin was 6,712 kg.

At the same time, according to Album, the mass of the explosive in the old-style projectile is 8,3 kg. I want to note that in 1907 the fleet received new shells of various calibers, including 254-mm. In this case, the 254-mm projectile mod. 1907, according to "Album", had the same mass (225,2 kg), but the content of explosives in it reached 28,3 kg, so no confusion is possible here.

We consider the density of pyroxylin

And really, isn't it easier to take a reference book?

Where is the truth?

Let's check this hypothesis by calculating a 254-mm projectile. For TNT, the run-up in density in sources is much lower: 1,65 is usually indicated, but in some cases (Rdutlovsky) 1,56 g / cubic meter. cm. Accordingly, it turns out that 8,3 kg of TNT will take, with a density of 1,58-1,65 g / cu. cm, volume equal to 5030-5320 cubic meters. cm. And this is the same volume that was previously occupied by the cover and pyroxylin in the "dotsushima" configuration of the projectile.

The covers were made in brass. The density of brass is approximately 8,8 g / cu. cm, respectively, 1,4 kg the cover will occupy about 159 cubic meters. see The share of pyroxylin remains, thus, 4871-5161 cubic meters. cm. Taking into account that they contained 6,712 kg of pyroxylin, we obtain the density of the latter in the range of 1,3-1,38 g / cc, which exactly corresponds to the density of dry pyroxylin calculated by us with a density of 1,58, "diluted" up to a moisture content of 25%.

Thus, for further calculations, we take the values ​​that are most suitable for the sources. The density of TNT is 1,65 g / cubic meter. cm, and the density of wet pyroxylin is 1,38 g / cu. cm.

In this case, the share of, in fact, pyroxylin, remained the volume of 3 and 135 cubic meters. cm, which we have adopted for the density of pyroxylin 7 g / cu. cm gives the mass of explosive:

That is, taking into account the calculation errors, we should talk about 4,3 kg of pyroxylin in armor-piercing and 10 kg in high-explosive 305-mm shells.

But why then only 6 kg of gunpowder "fit" into the high-explosive projectile ?!

Indeed, almost any reference book gives the density of smokeless powder at the level of pyroxylin, that is, not less than 1,56 g / cu. cm, or even higher. And given that a brass cover is not needed for smokeless powder, it turns out that the projectile should contain more smokeless powder than wet pyroxylin?

The thing is that most of the reference books give us the density of gunpowder as a substance. But the problem is that you cannot fill the entire volume of the projectile with gunpowder. Gunpowder was usually produced in granules. And when these granules were poured into any vessel, they occupied only part of its volume, while the rest was air. As far as I understand, it is possible to compress gunpowder to a monolithic state, but such gunpowder will burn, not explode. But for an explosion in a confined space, he needs a certain amount of air. However, I am not a chemist, and I will be grateful to a competent reader for clarifications on this issue.

However, there is a completely immutable fact - along with the "real" density, that is, the density of the "monolithic" powder, there is also the so-called "gravimetric" density of the powder - that is, the density, taking into account the free space between its granules. And this density for gunpowder usually does not exceed one, or even lower, which is well illustrated by the table below.

Moreover, as we can see, the gravimetric density of smokeless powder is approximately 0,8–0,9 g / cu. cm.

So, taking into account the fact that the mass of gunpowder in a 305-mm high-explosive projectile was, as can be seen from the "Relationship", 14,62 pounds or 5,987 kg, and our calculated capacity under the explosives of this projectile was 7 cubic meters. cm, then we get a gravimetric density of smokeless powder equal to 515 g / cu. cm, which practically coincides with 0,796 g / cu. cm for one of the types of smokeless powders shown in the table.

In view of the above, I believe it can be safely asserted that the Russian 305-mm armor-piercing lightweight shells used in the Russo-Japanese War had 4,3 kg of pyroxylin. And high-explosive - either 10 kg of pyroxylin, or 5,99 kg of smokeless powder.

As you know, high-explosive shells for 2TOE, due to the unavailability of pyroxylin, were equipped with smokeless powder, and, very likely, on a pyroxylin basis.

Unfortunately, it is extremely difficult to compare explosives with each other in terms of the strength of their effect. Well, here is, for example, Trauzl's lead bomb method: according to it, the work of dry pyroxylin is greater than TNT. Hence, it seems that pyroxylin is better than trinitrotoluene. But the point is that dry pyroxylin of equal mass with TNT was tested, despite the fact that not dry, but wet pyroxylin is used in the shells. At the same time, more TNT will enter the limited volume of the projectile than wet pyroxylin (the density of the former is higher, besides, pyroxylin needs an additional cover).

And if you look at the example of the "dotsushima" 305-mm projectile, you get this.

On the one hand, I came across data that the force of the explosion of dry pyroxylin is about 1,17 times greater than that of TNT.

But, on the other hand, the "dotsushima" 305-mm projectile included either 12,4 kg of TNT, or 10 kg of wet pyroxylin. Assuming a humidity of 25%, we get 7,5 kg of dry pyroxylin, which is 1,65 times less than 12,4 kg of TNT. It turns out that according to the table, pyroxylin seems to be better, but in fact, the projectile equipped with it loses to the projectile with TNT by as much as 41%!

And I am not getting into the nuances that the energy of the explosion of pyroxylin will be spent on the evaporation of water and heating the steam, and TNT does not need to do anything of this ...

Unfortunately, I do not have the knowledge to correctly compare the explosion power of pyroxylin and smokeless powder based on it. On the net, I came across opinions that these forces are comparable, although it is unclear whether smokeless powder was equated with dry or wet pyroxylin. But in both cases, it must be stated that the 305TOE high-explosive 2-mm projectiles were significantly weaker than those with which the 1st Pacific squadron was equipped.

If the assumption is true that the smokeless powder approximately corresponded to dry pyroxylin, then the 2TOE high-explosive projectiles were about 1,25 times weaker (5,99 kg of gunpowder versus 7,5 kg of dry pyroxylin).

If smokeless gunpowder in terms of explosion strength should be equal to wet pyroxylin, then by 1,67 times (5,99 kg of gunpowder versus 10 kg of wet pyroxylin).

However, it should be borne in mind that both of these statements may be wrong.

And it is possible that the difference between the high-explosive 305-mm shells of the 1st and 2nd Pacific squadrons actually turned out to be much more significant.