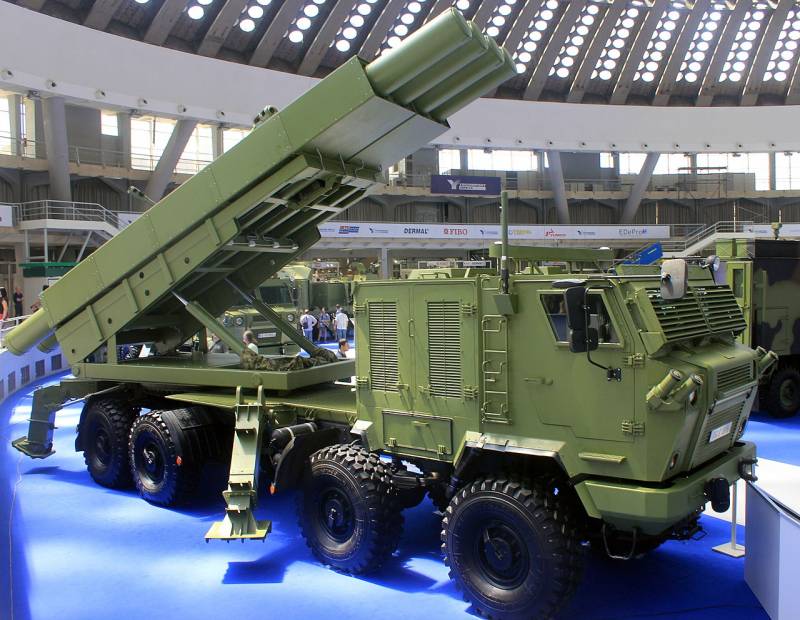 "Shumadija" at one of the foreign exhibitions

The product catalog of the Jugoimport SDPR enterprise (Serbia) contains a wide range of modern multiple launch rocket systems with different features and characteristics. One of the latest developments in this area is the Shumadiga modular MLRS. It is capable of using two types of rockets, which ensure the destruction of targets at ranges up to 285 km.

At the exhibition and at the parade

Project "Shumadia" (by name historical region in the center of Serbia) was developed in the mid-tenths by the forces of several key enterprises of the Serbian defense industry. The main developers were the Belgrade Military Technical Institute, as well as the companies "EDePro" and "Krusik Vajevo". Subsequently, they completed the assembly of experimental equipment and prepared production facilities for the series.

According to known data, the basis of the modern project was the developments of previous years. Back in the eighties, the Military Technical Institute studied the possibility of creating an MLRS with a large-caliber projectile capable of showing an increased flight range. In the nineties, work on this topic slowed down, but later it was possible to again reach a high pace and create a full-fledged complex of rocket artillery. 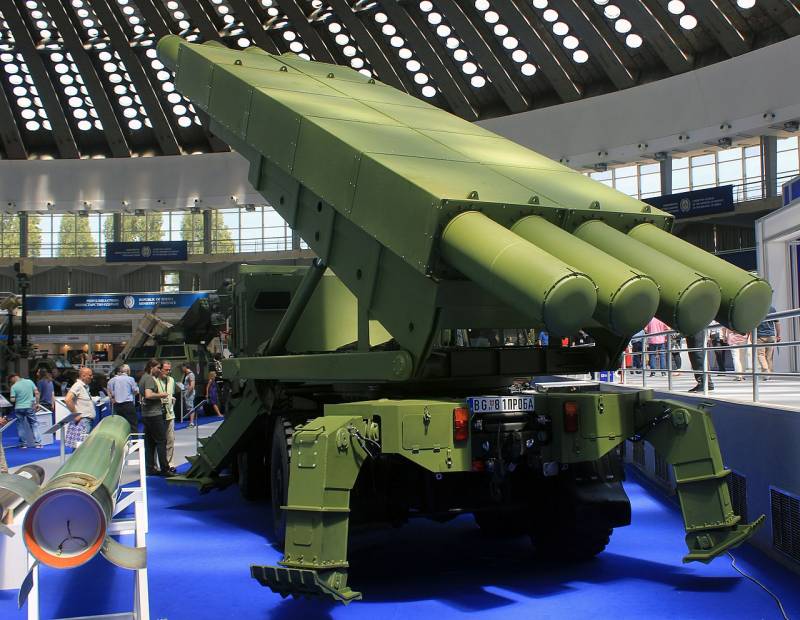 The launcher contains modules with 400-mm missiles.
The first public display of the new MLRS took place at IDEX 2017 in the UAE. Later, the Shumadija product was shown at other events in Serbia and in foreign countries. On October 19, 2019, combat vehicles of a new type took part in a military parade in honor of the anniversary of the liberation of Belgrade from the Nazi invaders.

The appearance of a new MLRS at the parade, according to various estimates, spoke of its adoption by the Serbian army. However, no reports of mass production and transfer of equipment to the troops have yet been received. Apparently, "Shumadia" either remains on trials, or is already ready for production if there is an order. The same is the case with export deliveries. Demonstration at foreign exhibitions has not yet led to the emergence of contracts.

MLRS "Shumadiga" is a complex designed to deliver missile strikes against area targets in tactical depth. The project is based on the well-known, but not the most common concept of MLRS with a modular combat load - by replacing transport and launch containers, a combat vehicle can use two types of missiles with different characteristics. MLRS is capable of working independently or as part of various divisions. 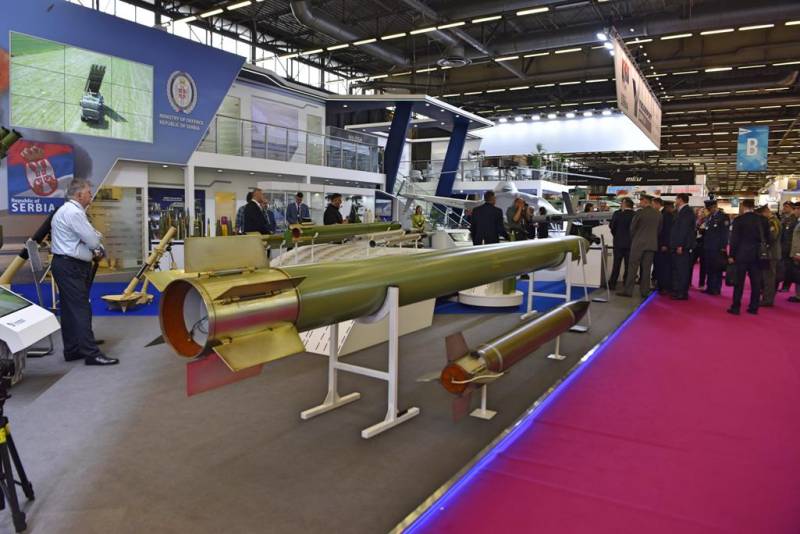 There are two types of rockets. Larger product - "Jerina-1"
Prototype MLRSs were built on four-axle KamAZ chassis. The original armored hull was used, containing the calculation places and the rear compartment. The cargo platform of the chassis received jacks, hydraulic or electric, at the request of the customer. The aft part of the car is given under the launcher. The resulting combat vehicle weighs 38 tons in running order and retains the running characteristics of the base chassis. The calculation includes 4 people.

The launcher consists of a slewing support and an oscillating platform. The aiming control is carried out remotely, from the operator's console. The actuators are electrical and hydraulic. There are no projectile guides directly on the launcher, but there are mounts for mounting two modules with missiles.

The module is made in the form of a rectangular body several meters long and approx. 1,5 m with fasteners for mounting on the swinging part of the unit. Such a building houses transport and launch containers with rockets. The number of rockets in a module depends on their type. In addition, TPK missiles of larger caliber protrude beyond the ends of the module. 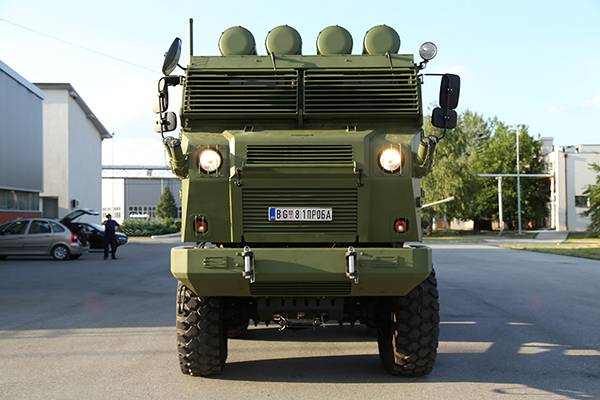 On board the "Shumadia" there are inertial and satellite navigation facilities, communication systems and a modern digital fire control system. With the help of these means, the MLRS is capable of determining its coordinates, receiving target designation and calculating data for firing. Preparation for launching missiles is carried out using remote control and takes minimal time.

The control equipment allows the new MLRS to work independently, as well as as part of a battery of up to 6 units. or in a battalion with 18 launchers. The group use of Shumadiga complexes is carried out with the help of a battery / divisional command post that coordinates the work of individual combat vehicles.

Within the framework of the Shumadiga project, two types of missiles with different characteristics and missions have been created. They are placed in containers of appropriate dimensions and installed in unified modules. Shooting with single shells or with a salvo is allowed - depending on the task at hand. 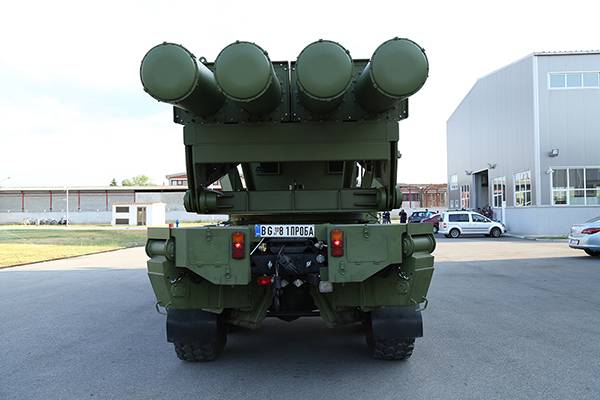 At the exhibitions, the combat vehicle was demonstrated with the modules of the Jerina-1 missiles. This product is 8,25 m long, 400 m in caliber and 1550 kg in weight. The solid-propellant engine provides a flight range of 285 km. A 200-kg warhead is provided. On board the rocket there is a guidance system based on satellite and inertial navigation, which provides a CEP of no more than 50 m.

Missiles "Jerina-1" are delivered in cylindrical TPK, two in a unified module. The mass of the latter is 4,2 tons. The rocket, container and module have connectors for communication with the OMS of the launcher. Ready-to-use ammunition on the launcher - only 4 missiles.

The Jerina-2 rocket is a further development of the ammunition for the older M-87 Orcan MLRS. This rocket is 4,7 m long, 262 mm caliber and weighs less than 100 kg. The range of such a product does not exceed 70 km. A high-explosive fragmentation warhead is used, however, the possibility of using other equipment is declared, incl. unified with the Orkan missile.

TPK with "Jerina-2" products are installed in a module of six pieces, in two tiers of three. Thus, a salvo of one MLRS can include up to 12 missiles. 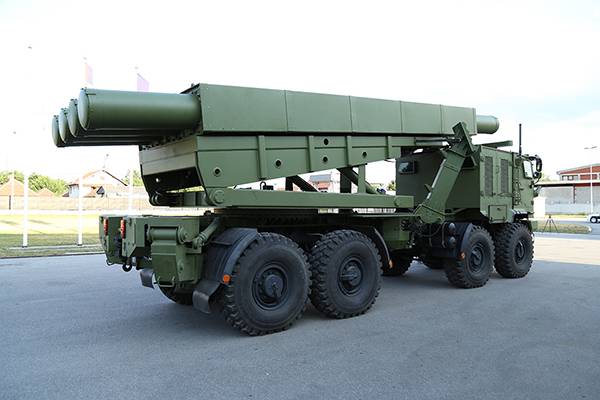 The MLRS includes a transport and reloading machine. It is proposed to carry four modules with missiles of any type on its cargo platform. It has its own crane for loading modules onto the launcher. Mechanization of processes and the use of modules not only compensates for a significant mass of ammunition, but also accelerates preparation for firing.

MLRS "Shumadiga" uses the promising idea of ​​using different ammunition with different characteristics, which allows to achieve very remarkable results. The main advantages of such a system are related to the firing range and flexibility of use. 262-mm shells make it possible to attack area targets at an increased range, and 400-mm ammunition becomes an analogue of operational-tactical missiles.

Simultaneously with "Shumadia", another modular MLRS, called "Tamnava", was being developed. It is capable of using shells of calibers 122 and 262 mm in ready-made replaceable modules, and the combat vehicle itself transports and installs spare ammunition. 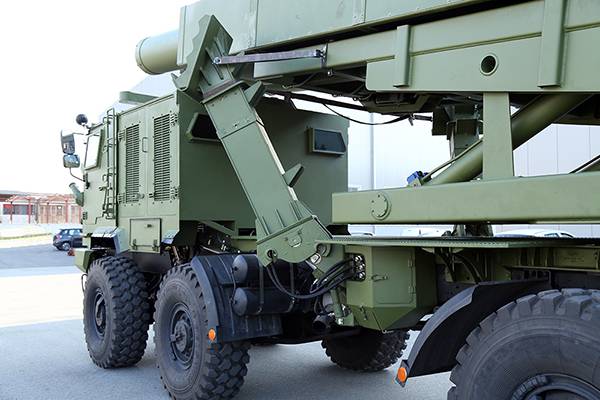 Two modern MLRS of Serbian design are capable of forming an artillery complex with broad capabilities. With the help of its 122-mm shells, "Tamnava" can fire at a distance of 2-3 km to 40 mm. The 262 mm rounds are compatible with both systems and provide a salvo fire at 70 km. Finally, Shumadia can hit a small target at a distance of 285 km. To this should be added the presence of missiles with different warheads, which increases the flexibility of use.

Thus, Serbian enterprises managed to create at once two very interesting and successful multiple launch rocket systems with wide capabilities and serious advantages. Obviously, such samples can interest potential buyers and go into series for the Serbian army or foreign countries.

However, while the MLRS "Shumadija" has not reached production, and its prospects remain uncertain. Jugoimport SDPR is trying to promote its products in the domestic and international markets, but in the case of promising multiple launch rocket systems, there have been no significant successes so far. Perhaps the situation will change for the better in the future, and a modular approach will contribute to this result.