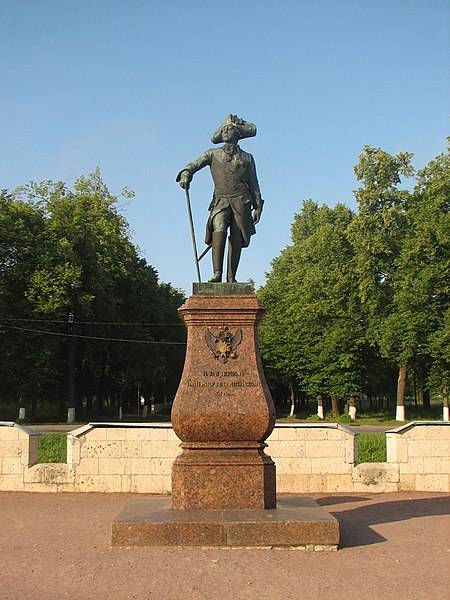 Monument to Paul I in Gatchina. The work of I. Vitali

220 years ago, the Russian Tsar Paul I was killed in his bedroom at the Mikhailovsky Castle. For a long time, the topic of Paul's murder was completely banned in the Russian Empire. According to the official version, he had an apoplectic stroke.

There was a joke in the capital:

"The emperor died with an apoplectic blow to the temple with a snuffbox."
This conspiracy was the last in the era of palace coups.

It was attended by almost the entire court elite, headed by Vice-Chancellor Nikita Panin, St. Petersburg Governor-General Peter Palen, the last favorite of Catherine II Platon Zubov and his brothers. It is possible that the son of the emperor, Alexander Pavlovich, was also aware of the conspiracy.

Emperor Pavel Petrovich is one of the most vilified figures in the Russian stories.

His contemporaries did not understand him. The descendants, who looked at Paul through the eyes of his century, did not appreciate it.

And in noble circles it was customary to talk not only about immense despotism, but also about the insanity of the tsar. In him they saw only a tyrant, who was ready to exile the Horse Guards for poor alignment directly from the watch parade to Siberia. The dictator who forbade the word "citizen", the wearing of tailcoats and round hats characteristic of

"Godless French".
He ordered to paint all the barriers and sentry boxes of the empire in the color of the gloves of his favorite.

All these stereotypes were fully accepted first by Soviet and then Russian cinematography. The people were shown the tsar "fool", a mad despot.

Forgotten was his truly chivalrous character, as well as his kind and sympathetic soul. And the fact that he was a quick-tempered, but easy-going emperor.

The creators of the general picture of Paul's life also preferred not to remember that he spent almost his entire life in exile. Catherine the Great, who did a lot of good to the state and people, was like a stepmother for her son.

From childhood and adolescence, the Tsarevich endured the insults of the empress's powerful favorites, participants in the assassination of his father, Tsar Peter III, who openly sneered at him and defamed the memory of his father. They did not reckon with him, did not respect him.

In his youth, he thirsted for exploits, was full of knightly aspirations and repeatedly asked for war (and during the glorious reign of Catherine there were enough reasons for the Tsarevich to fight). But he was excommunicated from the front line.

He had to endure a lot, suffer. A deep breakdown occurred in his soul, which left a strong and tragic imprint on his entire character.

The Tsarevich saw the inside of the victorious, beautiful court of Catherine. His small and ascetic courtyard in Gatchina was a kind of antipode to the brilliant and magnificent Petersburg courtyard.

The little Gatchina guard (a kind of "amusing" Peter the Great) was a protest against the brilliant Catherine's guard and the orders of mother.

The Gatchina army consisted of 6 weak numbered battalions (200-300 men), 3 cavalry regiments, two squadrons each (Gendarme, Dragunsky and Gussar - 150-200 sabers each) and 1 artillery battalion (12 harnessed and 46 unloaded cannons). Up to 2 thousand people in total.

All the dissatisfied and losers from the regular army, its “dirty linen”, went here.

Harsh, disciplined servicemen, "fruntoviks" made a strong contrast with the pampered metropolitan dandies and motes of Catherine's times. Many guardsmen served only formally, spending time in revelry and partying.

Much has been done in the organization, technical support and procurement fleet... Much of Paul's Naval Rite has survived to this day. The service and life of the sailors has been made easier.

He became the master of the Knightly Order of Malta, whose interests he took to heart. As a result, Russia could become the heir to the ancient knightly traditions of Europe, accept the best from the Order of St. John. And received a base in the Mediterranean Sea - Malta.

Paul adopted a new act of succession, which canceled the decree of Peter I, which provided for the sovereign the right to appoint an heir himself, which opened the way to the era of palace coups. And it could lead to chaos and dictatorship.

Also, the Pavlovian law gave preference to male heirs. The era of women empresses is over.

Pavel Petrovich began to put things in order in the nobility. Restored corporal punishment for nobles for various crimes. Nobles who evaded service were brought to justice. Also, the nobles were obliged to pay tax for the maintenance of local governments, etc.

Paul (like all sovereigns since the time of Catherine the Great) was aware of the danger and negativity of serfdom. Serfdom was dealt the first blow by the decree on the three-day corvee.

For the peasants, the ruinous grain service was abolished. The preferential sale of salt and bread from state stocks began in order to bring down prices.

It was forbidden to sell household people and peasants without land, to separate families. The governors were supposed to monitor the attitude of the landowners to the peasants, in case of violations - to inform the sovereign. The peasants received the right to file complaints about the oppression of the nobles and managers.

The position of the parish priests was eased. The Emperor allowed the construction of Old Believer churches in all dioceses. Paul had a special relationship with the papal throne, the Jesuit Order and the Order of Malta. Through them, Paul tried to influence Europe, preserve and restore the knighthood.

Pavel Petrovich first succumbed to Austria and England. He entered into a confrontation with France.

The immortal exploits of Ushakov in the Mediterranean and Suvorov in Italy and Switzerland glorified the Russians weapon.

However, the Master of the Order of Malta quickly figured out the hypocrisy and meanness of Vienna and London.

The Austrians and British wanted to crush revolutionary France with Russian hands. And they themselves wanted to capture areas and strategic points in Northern and Southern Europe, as well as in the Mediterranean Sea. Russians were used as "cannon fodder". At the same time, Russia and France then did not have any strategic contradictions that needed to be resolved with weapons. Moreover, the two powers could conclude a mutually beneficial alliance and limit the appetites of Austria and England.

Therefore, Paul refused to participate in the coalition against France.

In 1800, he was ready, together with France, to act against England. The idea arose of a grandiose march to India, which could crush the British positions in India. The Russian-French strategic alliance could destroy Britain's plans to create a world empire, global hegemony.

The sovereign revived the principles of the first armed neutrality. Thus, Northern Europe came out of the influence of England. A coalition of powers with their own fleets opposed England.

On the one hand, the sovereign, instead of the rational "Potemkin" form, which abolished wigs and bouclés, introduced uniforms borrowed from outdated Prussian models. Great attention was paid to the outer side of the service (shagistika), drill.

On the other hand, a lot has been done and positive. The sovereign tried to establish order and discipline in the brilliant but disbanded Catherine's army and guards. The dandies and idlers, who neglected their duties and looked at service as a profitable and pleasant business, were shown and made to feel that service is above all service.

Military regulations introduced criminal liability of officers for the life and health of their subordinate soldiers. The privates were forbidden to be used as serfs, taken to estates, used outside of military service. The service life of the soldiers was limited to 25 years, previously the service was lifelong. For those dismissed for health or seniority at 25, pensions were introduced.

In the new Pavlovsk uniforms, for the first time, they introduced warm winter clothes (vests and an overcoat), they saved thousands of lives in future wars. In winter, sheepskin coats and felt boots were introduced for the sentries.

The townspeople were freed from the stand. They began to build barracks (previously they were only in the capital).

The Russian emperor was the first in Europe to introduce an award for soldiers - a silver medal "For Bravery". For the immaculate 20-year service, they were awarded the insignia of the Order of St. Anna (then the badge of the Order of St. John). The second (after Paul) ordinary soldier was awarded by Napoleon.

The emperor also introduced collective awards - distinctions to regiments. The first award was a grenadier battle, borrowed from Prussia, and complained to the regiments for distinction. Another reward was the inscriptions on the banners of the regiments that repulsed the enemy's banners. Also, the sovereign raised the value of regimental banners to regimental shrines. Previously, they were considered simple property.

It is worth noting that Tsar Paul, despite his severity and quick temper, loved a simple soldier. The soldiers felt it and responded in kind.

As noted by the Russian military historian A.A. Kersnovsky:

"The silent ranks of crying grenadiers, the silently wavering lines of bayonets on the fateful morning of March 11, 1801, were one of the most tragic paintings in the history of the Russian army." 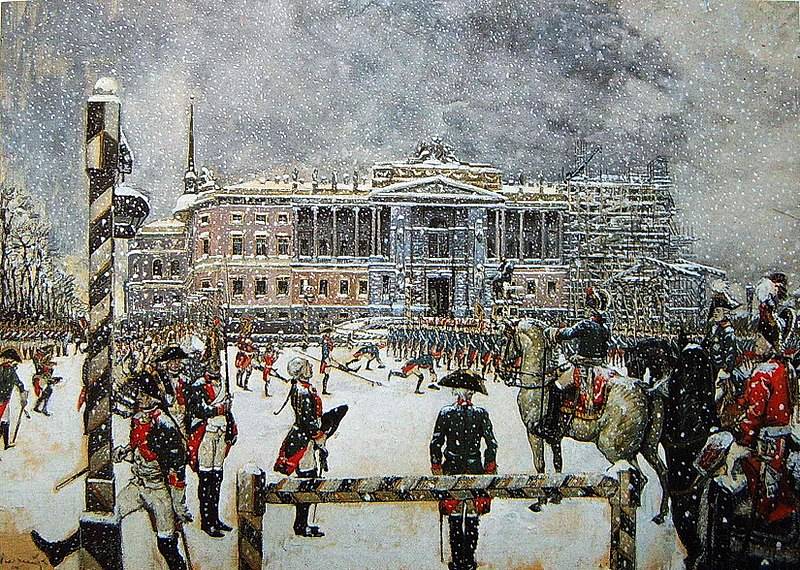 The death of the sovereign

The killers were led by Nikolai Zubov and Leonty Bennigsen. The conspirators, after getting drunk, demanded that Paul renounce the throne in favor of his son, Alexander.

“… Several threats that escaped from the unfortunate Pavel caused Nikolai Zubov, who was athletic strength.

He held in his hand a gold snuff-box and with a swing hit Paul in the temple with it, this was a signal by which Prince Yashvil, Tatarinov, Gordonov and Skaryatin fiercely rushed at him, snatched the sword from his hands: a desperate struggle began with him.

Paul was strong and strong; he was thrown to the floor, trampled underfoot, with a sword hilt they broke his head and, finally, crushed Skaryatin with a scarf ”.
The conspiracy took shape among the decayed aristocracy, which hated Paul for his "knightly" policy.

For the desire of the sovereign to call the nobility and high society to order and discipline.

In St. Petersburg there was a strong pro-German party, in the interests of the German peace was the participation of Russians in the war with France.

Plus the interests of Britain.

One of the most important roles in the conspiracy was played by the British ambassador Charles Whitworthby the way mason.

He was the lover of Olga Alexandrovna Zherebtsova, sister of Platon Zubov. Through Zherebtsova, the conspirators received instructions and gold.

Thus, Britain thwarted the Russian-French alliance, the Indian campaign of the Russian army, the threat of the unification of the Nordic countries against England.

Pavel Petrovich's policy could significantly weaken the position of England, this monstrous spider swollen with blood and gold of hundreds of peoples.

Paul was the first to realize the terrible threat posed to Russia and the world from Britain. And he died.

Alexander Pavlovich, Paul's son, was so intimidated and broken that none of the conspirators was punished.

And Russia again began to play the role of "cannon fodder" of Vienna, London and Berlin, getting involved in completely unnecessary and bloody wars with France (How Russia became the figure of England in the big game against France; Part 2).