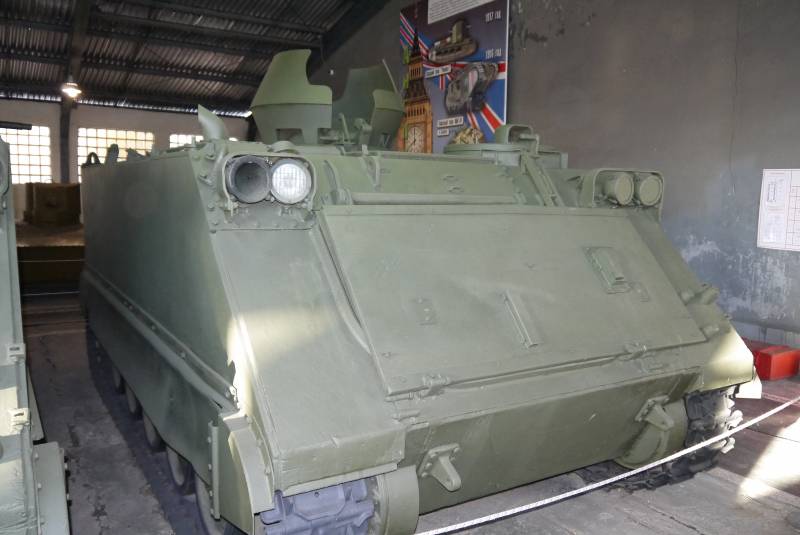 M113 in the Armored Museum in Kubinka. Photo by the author

Visitors to the Armored Museum in Kubinka near Moscow, in all the variety of domestic and foreign equipment, will not pay attention to the three American M113 armored personnel carriers from the first time. Nevertheless, these tracked armored vehicles, installed in Pavilion No. 5 "Armored vehicles of the USA, Great Britain, Canada", are worthy of a separate stories.

The very first of them, the M113 armored personnel carrier with inventory number 4616, appeared in Kubinka in military unit 68054 in the early 70s. The car was donated by North Vietnamese comrades in gratitude for the extensive Soviet assistance. The rest of the M113s came to Kubinka later, after the defeat of the southerners. When the Americans left over 1300 tracked vehicles as trophies to the winners. A large part of them are now serving in the Vietnamese People's Army, armed with Soviet rifle weapons. 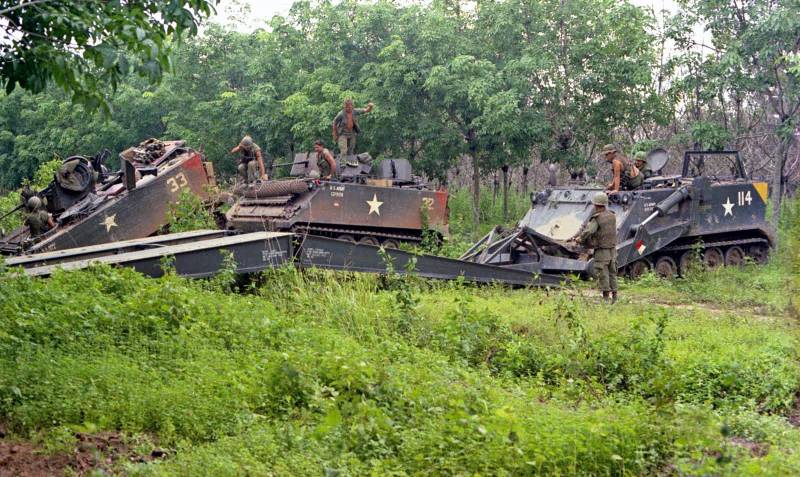 The baptism of fire of the M113 was adopted in Vietnam. Source: livejournal.com
For the early 70s, the American armored personnel carrier was a completely successful model, although it was not devoid of some shortcomings.

For its time, it was the most massive foreign tracked armored vehicle - by 1978, more than 40 thousand copies were produced. The Americans did not make any special secrets about the design of the M113. And they sold generously to allies - in at least 30 countries.

The armored car received its baptism of fire in Vietnam in 1962, when the American command transferred 32 vehicles to the South Vietnamese army. Then the Vietnamese gave the M113 the sonorous nickname "Green Dragon".

Indeed, at first, the enemy could not oppose anything to the tracked vehicle. The armored car had good maneuverability on rice checks, and also withstood small arms fire.

The partisans suffered losses. And this forced to look for new methods of dealing with the M113.

To do this, vehicles were lured into impassable areas and fired at from hand-held anti-tank grenade launchers.

Massive concentrated fire on the commander was also quite effective. tank... The Browning M2HB machine gun with a caliber of 12,7 mm was located on an open turret near the commander's cupola, which made the shooter very vulnerable.

In January 1963, the M113 company of the South Vietnamese army stormed a Viet Cong village. During the offensive, well-aimed North Vietnamese riflemen knocked out almost all the M113 commanders, who leaned out to the waist to fire from a machine gun. 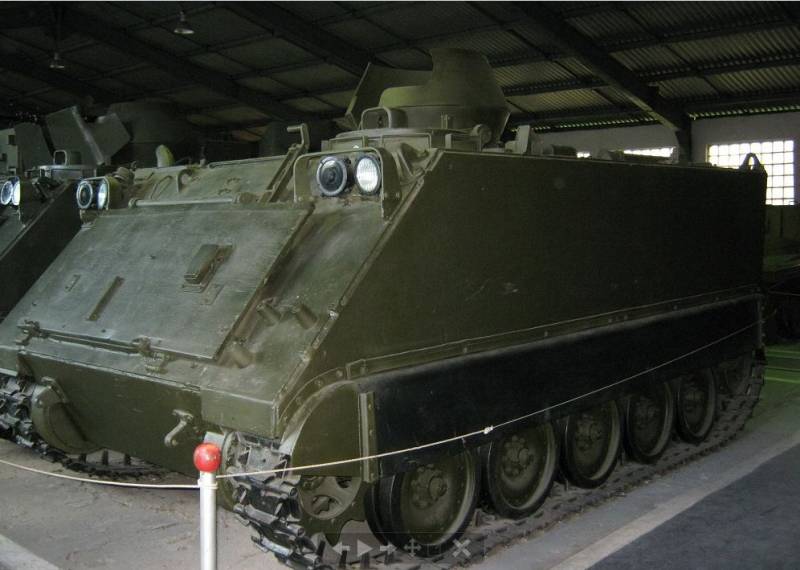 It is likely that not all of those exhibited in the M113 museum were exhibited in the USSR. Source: livejournal.com
The response to the ever-increasing losses among the crews of armored personnel carriers was the superstructure on the commander's cupola and machine gun guards. Installed similar in the repair shops of the South Vietnamese army. And later, protection appeared on the vehicles of the American troops.

At least one of these vehicles was captured and in good condition ended up in the Soviet Union.

The results of the study of the American M113 armored personnel carrier were partially published in the "Bulletin of armored vehicles" during the 70s. It can be assumed that a detailed study of all components of the machine and the registration of the results took the engineers a couple of years.

The greatest interest in Kubinka was aroused by the Allison TX-200-2 hydromechanical transmission with automatic gear shifting. It was a slightly redesigned civilian transmission of the XT series, which seriously reduced the cost of production of an armored personnel carrier.

At that time, the domestic industry could not offer anything of the kind, therefore, a considerable part of the publication was devoted to a detailed analysis of the device.

Engineers praised the transmission's small size and ease of use. Among the weaknesses of the armored personnel carrier, the insufficient power of the Chrysler Model 75M gasoline engine of 215 hp was noted. with. The kinematics of the transmission allowed it to accelerate to 72,5 km / h, but the traction capabilities of the motor were not enough. 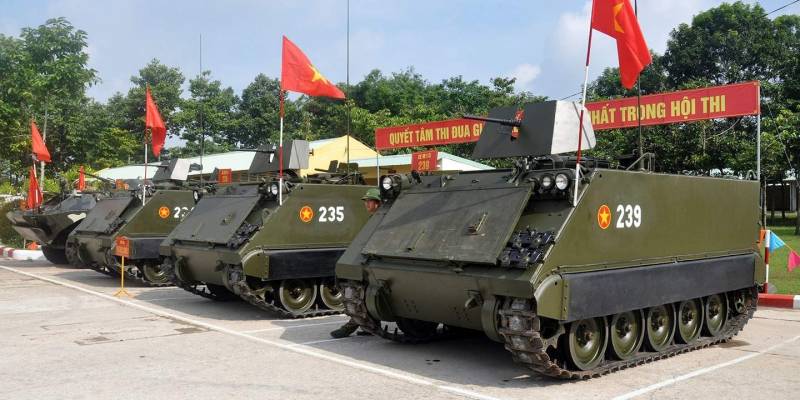 Dozens (if not hundreds) of captured M113s still serve in the Vietnamese army. Source: pikabu.ru
To assess the dynamics of the M113, a concrete track in the vicinity of Kubinka was used. In the highest sixth gear, the armored personnel carrier was able to gain about 56 km / h.

When loaded (10,4 tons), the car accelerated to maximum speed for almost 45 seconds, and in light weight (8,4 tons) it fit into 39. As the testers noted, the acceleration dynamics of a tracked armored car in all speed intervals was at the level of domestic military equipment light weight category.

During the study, engineers compared the M113 with the world's first BMP-1 infantry fighting vehicle.

It is not entirely clear why they chose an armored vehicle of a completely different class for comparison. The BMP-1 was one and a half tons heavier and much more heavily armed. When comparing the efficiency, the diesel infantry fighting vehicle consumed 23-28% less fuel than the gasoline M113.

On a closed route, 10 km long, the BMP-1 kept an average speed of 36,8 km / h, and the "American" - only 25,7 km / h. This was largely determined by both the greater power of the engine of the domestic car and the high smoothness of the ride. According to the last parameter, the M113 was seriously inferior to the BMP-1.

In the domestic literature, you can find references to such disadvantages of the M113 as low permeability on difficult soils. Obviously, information about this was taken from the experience of foreign operation, since the test engineers of Kubinka did not mention a word about such a shortcoming. Probably, the overseas armored car was simply not driven through the mud.

Interestingly, since 1964, the Americans began to release the M113A1 modification, in which the 215-horsepower Chrysler 75M engine was replaced by the 212-horsepower General Motors 6V53 diesel. So to speak, they took into account the mistakes and experience of a potential adversary.

Much later, engineers managed to compare the M113 series machines with more advanced BMP-2s in absentia. The corresponding analytical report was published in the "Bulletin of armored vehicles" in 1989. The Americans carried out controlled operation of the M113 in their homeland in Forts Hood and Irvine, as well as in German Bramberg.

Despite the fact that the test conditions for the armored personnel carrier were simpler than that of the Soviet BMP-2, the engineers rated the reliability of the M113 as close to the domestic vehicle. As stated in the article, this indicates a high level of design development.

In addition to the hydromechanical transmission, the captured M113 armored personnel carrier was of particular interest to aluminum armor, the share of which in the total mass of the vehicle reached 40%. More precisely, it was not entirely aluminum.

Chemical analysis showed that the proportion of magnesium in the alloy was about 4,5-5%, manganese - 0,6-0,8%, chromium - up to 0,1%, and the "winged metal" was about 94%. Surprisingly, chemists found even scarce titanium in the armor - up to 0,1%. The rest of the elements - iron, zirconium, zinc and silicon - were present in the armor in trace amounts. The testers even named the steel grade 5083 and noted its good weldability.

An important advantage of American armor was the absence of a hardening and tempering procedure, which greatly simplified production. The only armor parts made of steel alloys were the mentioned protective superstructures of the commander's cupola and machine-gun shields. It was the standard high hardness bulletproof armor. 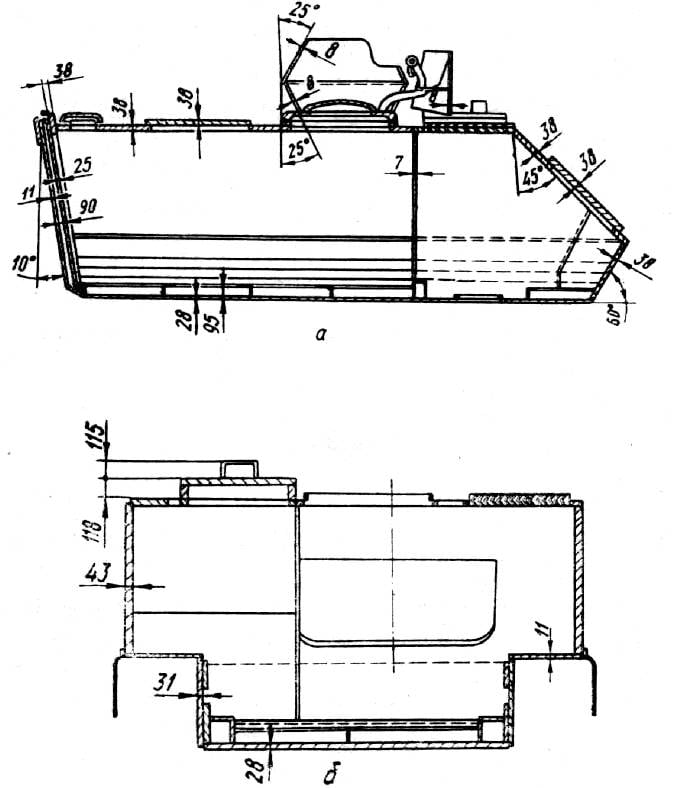 Drawing from the "Bulletin of armored vehicles". Source: btvt.info
Testing the resistance of the M113 armor to shelling by large-caliber machine guns makes one think about the number of armored personnel carriers supplied by Vietnam to Kubinka.

The museum specimen in pavilion 5 contains an entire armored personnel carrier. At least there are no visible bullet marks on it. Meanwhile, the M113 evacuated from Vietnam was not at all good at the training ground in Kubinka. The vehicle was processed with armor-piercing calibers 14,5 mm, 12,7 mm and 7,62 mm. The shelling was carried out at different course angles at the frontal and side parts of the armored vehicle from distances of up to a kilometer.

In the report on tests of the armor of the American armored personnel carrier, the level of protection was designated as relatively high.

Later, publications appeared in which the M113 was accused of low resistance to anti-tank weapons.

This, of course, is absurd - the vehicle was not originally designed for frontline combat. And it performed its main task of protecting the crew from small arms very well.

This was confirmed by tests in Kubinka based on military unit 68054.