Alexander Guchkov: the most "temporary" of the military ministers of Russia 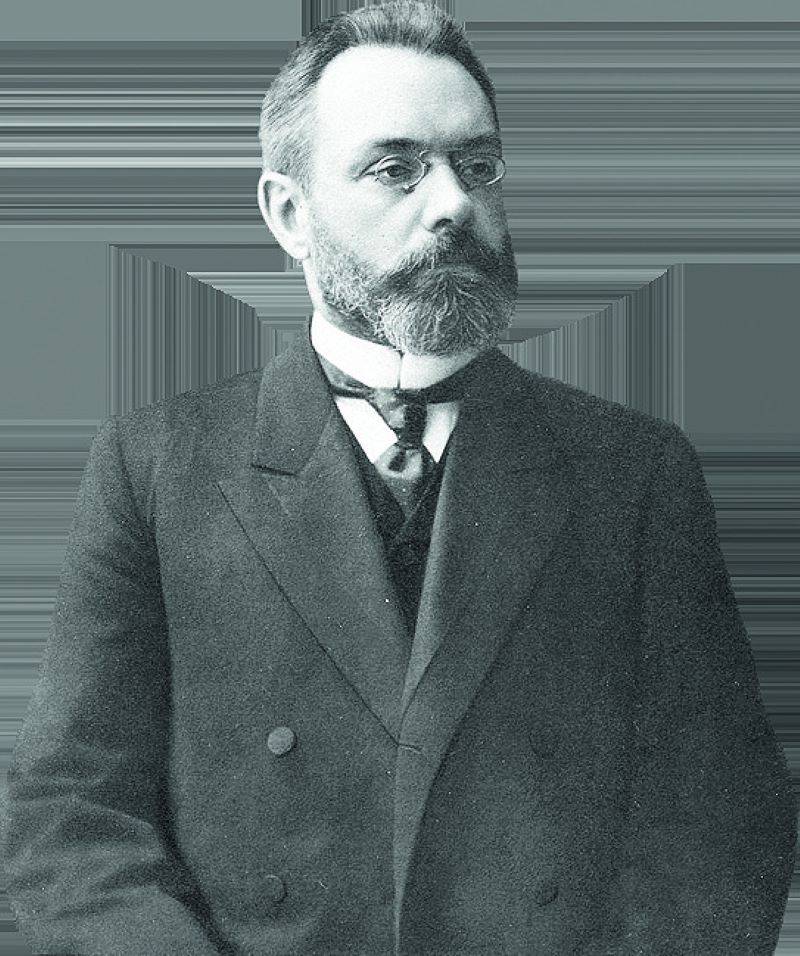 As another of the Duma leaders, and not a minister, Guchkov said about himself as follows:

"The rooster must scream before the sun rises, but whether it rises or not, this is no longer his business."

It was not his own business, by all indications, and took up, when in March 1917 he became the head of the Ministry of War in the Provisional Government of Prince G. Ye. Lvov. 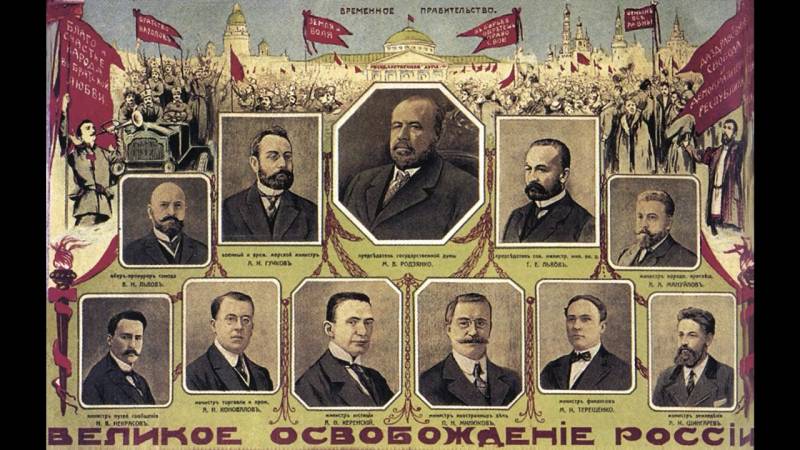 The 55-year-old Octobrist and merchant by origin, but not in spirit, Alexander Guchkov, as a former oppositionist, has long agreed in views with the cadet Pavel Milyukov, also “his Majesty’s oppositionist”, who was already almost 60. He easily submitted to the new prime minister - to the legendary zemstvo prince Lvov.

The same Guchkov, who himself headed the Third State Duma, was looking for a post for yet another elderly politician from among "his own" - the chairman of the IV Duma, MV Rodzianko. And he was ready to give all his strength to ensure that there were as few “leftists” as possible in the Provisional Government.

The main thing is that there were no Bolsheviks, since the Socialist-Revolutionaries, the most popular party in the country even then, had to be put up with in one way or another. It must be admitted that the Provisional Government exactly coincided in composition with the very "responsible ministry" that the "February revolutionaries" so dreamed of.

At that time, while Guchkov was minister of war and naval minister, there were not so many events at the front, the main thing is that there were no big defeats. But first of all, Guchkov, who, as you know, together with Shulgin knocked out the abdication from Nicholas II, did everything to ensure that Grand Duke Nikolai Nikolaevich did not return to the post of commander-in-chief. 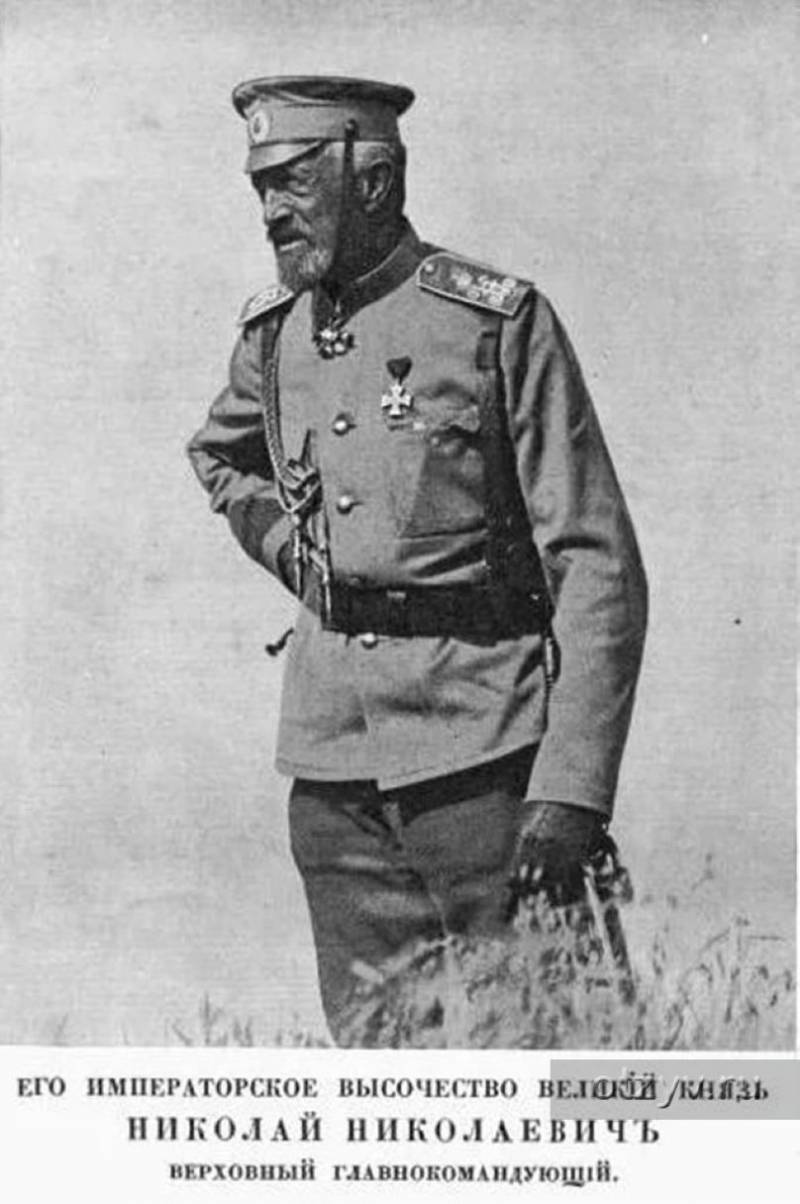 The tsar's uncle, the head of the Romanov family council, was also in favor of Nicholas II leaving, but for all the Romanovs to leave was too much. Renouncing, the emperor actually forgave Nikolai Nikolayevich for the actual betrayal and, with the last decree, again appointed him Supreme, after two years of governorship in the Caucasus.

The Grand Duke, to whom General N.N. Yudenich, who commanded the Caucasian Front, presented a whole series of victories over the Turks, rode in triumph from Tiflis to Mogilev to headquarters. However, there he was greeted not only by a letter from the new prime minister, either with a wish, or with an order not to take command, but also by obstruction from the civil authorities.

The generals were generally not against it, but politicians like Guchkov, and the local authorities, literally put sticks in their wheels. Nikolai Nikolaevich, still with an impressive appearance and noisy, but not the most decisive, did not resist for a long time and drove off to the Crimea offended.

He, unlike most of the great dukes, was lucky: he will be able to emigrate from the Crimea to France ... on the British battleship "Marlborough". Alexander Ivanovich could have been calm - now any commander-in-chief is not a hindrance to him, although the post of Minister of War itself did not imply even a hint of participation in the management of the active army. 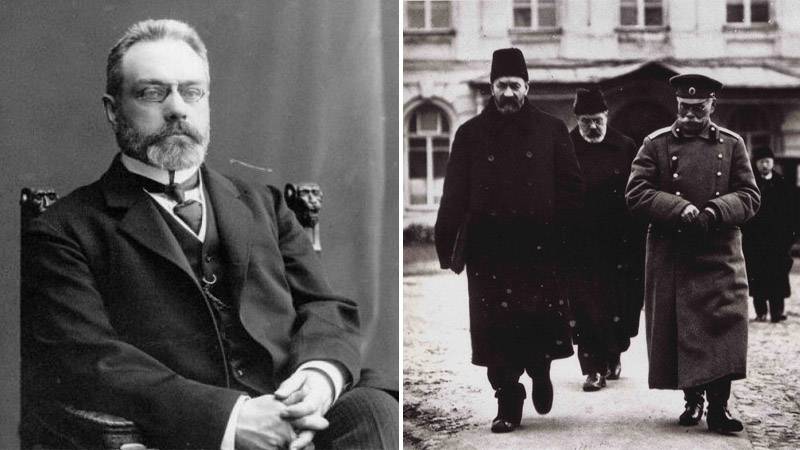 Alexander Guchkov (left). Prime Minister Lvov, Minister of War Guchkov (behind) and General Alekseev, Supreme Commander from April 2, 1917.
In the few days that Guchkov was at the head of the military department, he managed to quarrel not only with the majority of the generals, but also with all the leftists - representatives of the Soviets at the front, navy and military factories. The main thing is that he was out of tune with himself.

The minister began with a demonstrative democratization of the army: the abolition of officer titles and permission for soldiers and commanders to participate in meetings, councils, unions and parties, and most importantly - the actual recognition of the notorious Order No. 1. At the same time, Guchkov, however, did not leave the position of a supporter of war until a victorious end ...

Realizing that everything he did was a series of dangerous mistakes, Guchkov tried to maintain discipline and began something like a total mobilization of the defense industry. Now, not only the generals, all the ministers turned their backs on Guchkov, and on May 13 (April 30, according to the old style), 1917, he resigned.

And by the summer of 1917, Guchkov, together with Rodzianko, who would never wait for the revival of the Duma in the form of a Constituent Assembly, would become real pacifists. They will create the Liberal-Republican Party, they will condemn German militarism, sitting at the State Conference, in the Pre-Parliament and the Council of the Republic.

Together they will support Kornilov's speech, finally becoming right. Guchkov, like Rodzianko, should not have even dreamed of being elected to the Constituent Assembly, although even far more "right-wing" Cadets went there. It seems that only a few months before and after February 1917, Guchkov managed to really be among “his own people”.

And before that, and even more so after, there were and will be only "strangers" around. He was born in 1862 immediately after the abolition of serfdom in Russia into a well-known Moscow merchant family. Alexander Guchkov was educated as a philologist who graduated from Moscow University.

His military experience was not limited to serving as the volunteer 1st Life Grenadier Yekaterinoslav Regiment, but he was always considered an expert in military affairs. Guchkov will still go east to serve as a junior guard officer of the Chinese-Eastern Railway in Manchuria. 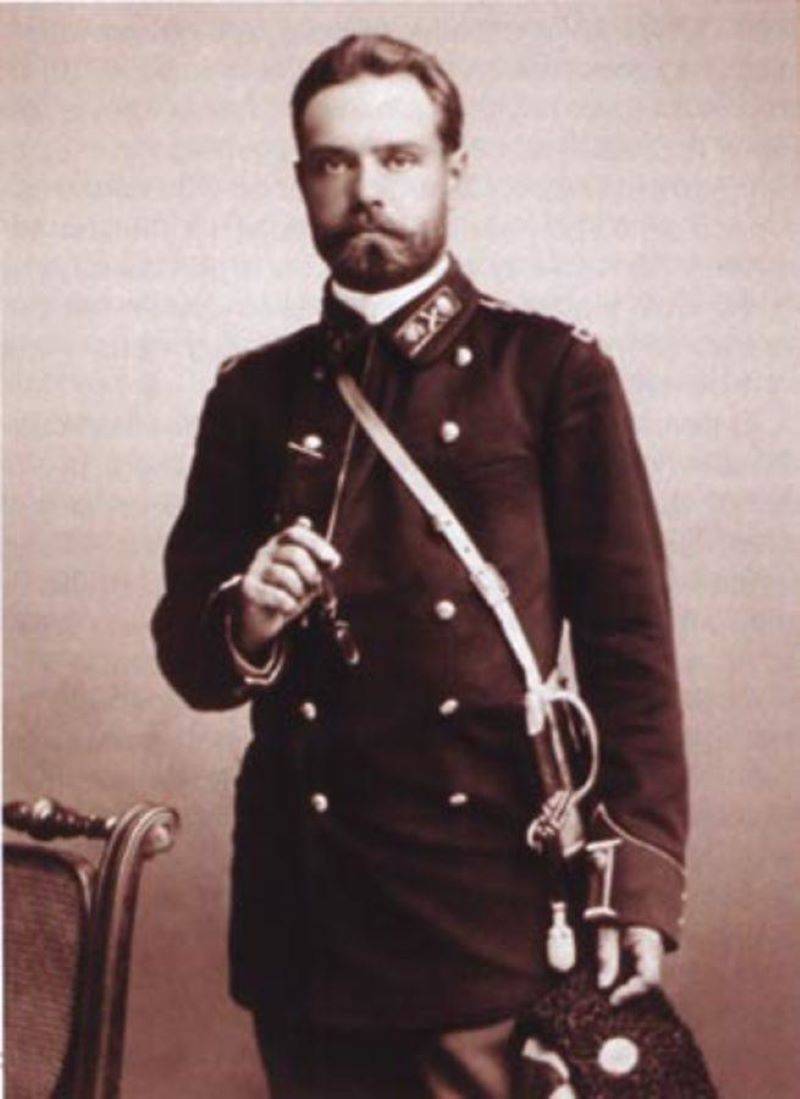 A.I. Guchkov in his youth
Due to the duel, he was forced to resign and immediately went to Africa, where he fought the British on the side of the Boers. Wounded, Guchkov was taken prisoner, and when he was released with the end of the war, he went to Macedonia to fight against the Turks.

In the Russo-Japanese War, he found himself already as a commissioner of the Red Cross ... and was again taken prisoner. The merchant's son, an experienced soldier, returned to Moscow when she was already in full swing with the revolution, participated in zemstvo and city congresses.

It is easy to understand why no one had any doubts when Guchkov was appointed minister of war. But by and large he did not become a merchant, starting with the fact that he became an honorary magistrate in Moscow, where the Guchkovs were respected.

He managed to attend lectures at several European universities at once, but apart from stories they did not concern military affairs. Traveled, including to Tibet. Guchkov emerged from the revolution as one of the founders of the "Union of October 17".

He was a little over 40, and with his life experience, the post of chairman of the Central Committee of the new party was just for Guchkov. He is not only a member of the State Council, he goes to the Duma and even heads it in the third convocation.

Alexander Ivanovich, a man by no means poor, always advocated a constructive dialogue with the tsar and the government, not opposing the dispersal of all three Dumas. The fourth, as you know, died on its own - in February 1917. 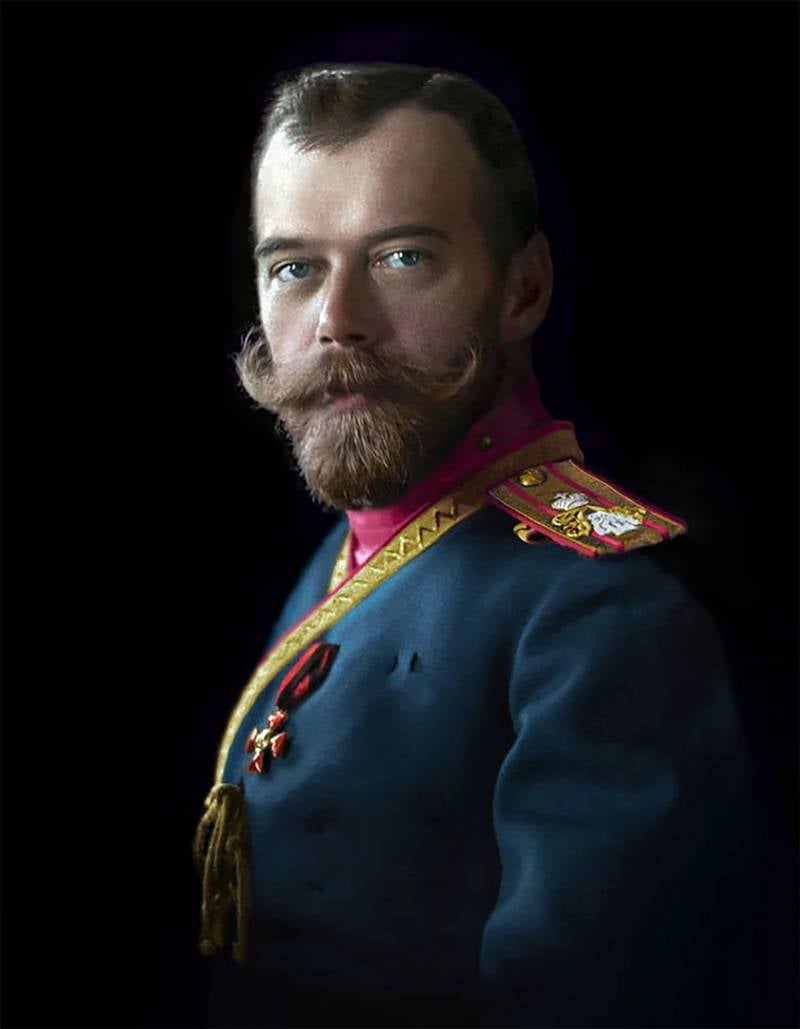 Parliamentarian Guchkov criticized everything that was done in the military department, and Nicholas II considered him the most dangerous revolutionary and almost a personal enemy. Perhaps that is why he made renunciation so easily that he did not understand what to expect from Guchkov. He was not afraid of those.

Nobody's among the nobody's

Meanwhile, the future Minister of War of no longer monarchist Russia was a staunch supporter of a constitutional monarchy. He bowed to Stolypin, was for a strong central power and for the cultural autonomy of peoples, up to the independence of Poland, Finland and even, possibly, Ukraine. 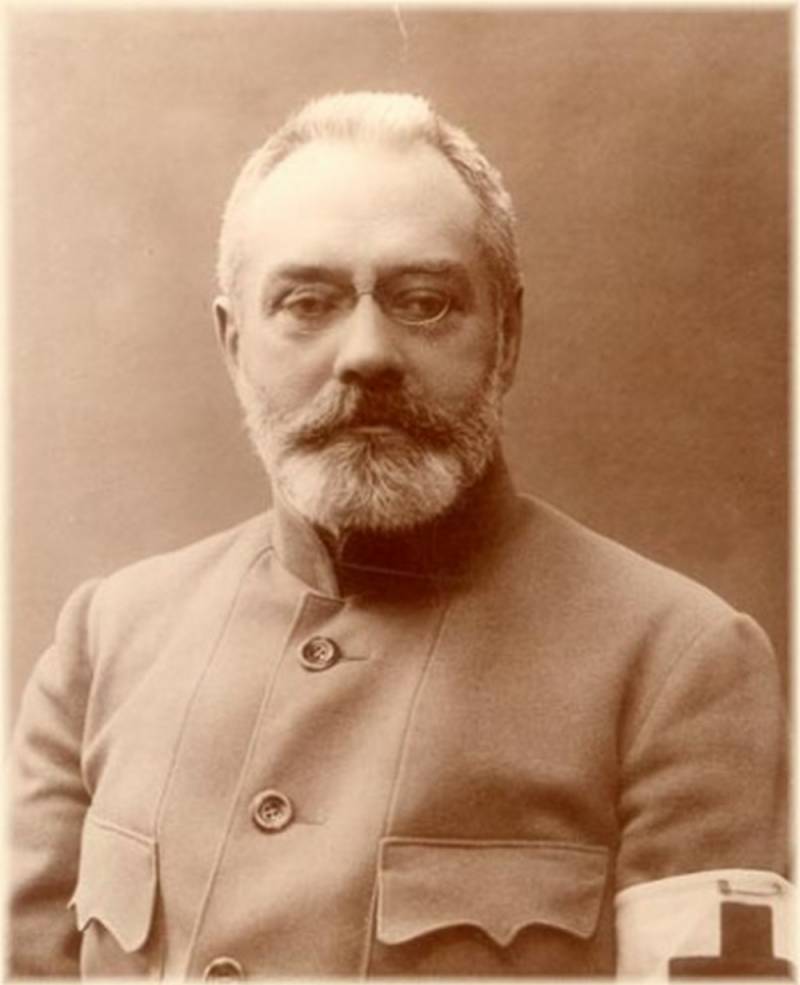 During the World War II, the Duma functionary regularly went to the front, entered the Progressive Bloc and participated in the February coup, which grew into a revolution. It was Guchkov, together with the monarchist Vasily Shulgin, who accepted the abdication from the hands of Nicholas II, which many still doubt.

Leaving the post of Minister of War in May 1917, Guchkov headed the Society for the Economic Revival of Russia, returned to parliamentary games, but eventually left the Red Cross for the Volunteer Army.

General Denikin asked him to go to Paris for support for the White Army. Then Guchkov came to Crimea for negotiations with Wrangel, and in the end he simply emigrated - first to Berlin, then to Paris, where he even tried to establish ties with Trotsky, considering him a worthy future dictator of Russia.

The aging politician took over the duties of the chairman of the Russian parliamentary committee in Paris, who never managed to achieve anything real. But Guchkov was also a member of the National Committee, from where the military coup in Bulgaria was initiated.

In the coup, as if according to the tradition of tsarist times, Russian white officers distinguished themselves, but for some reason they left Boris III of the Saxe-Coburg dynasty on the throne. And Boris in the Second World War, albeit under pressure from Germany, made Bulgaria with an openly pro-Russian attitude of the population an enemy of Russia.

One cannot but pay tribute to the retired politician for his participation in helping the starving in Russia, although it had a distinct political background. Alexander Ivanovich immediately correctly assessed what Hitler and his entourage were, and before his death fought to prevent the Nazis from attacking the USSR. 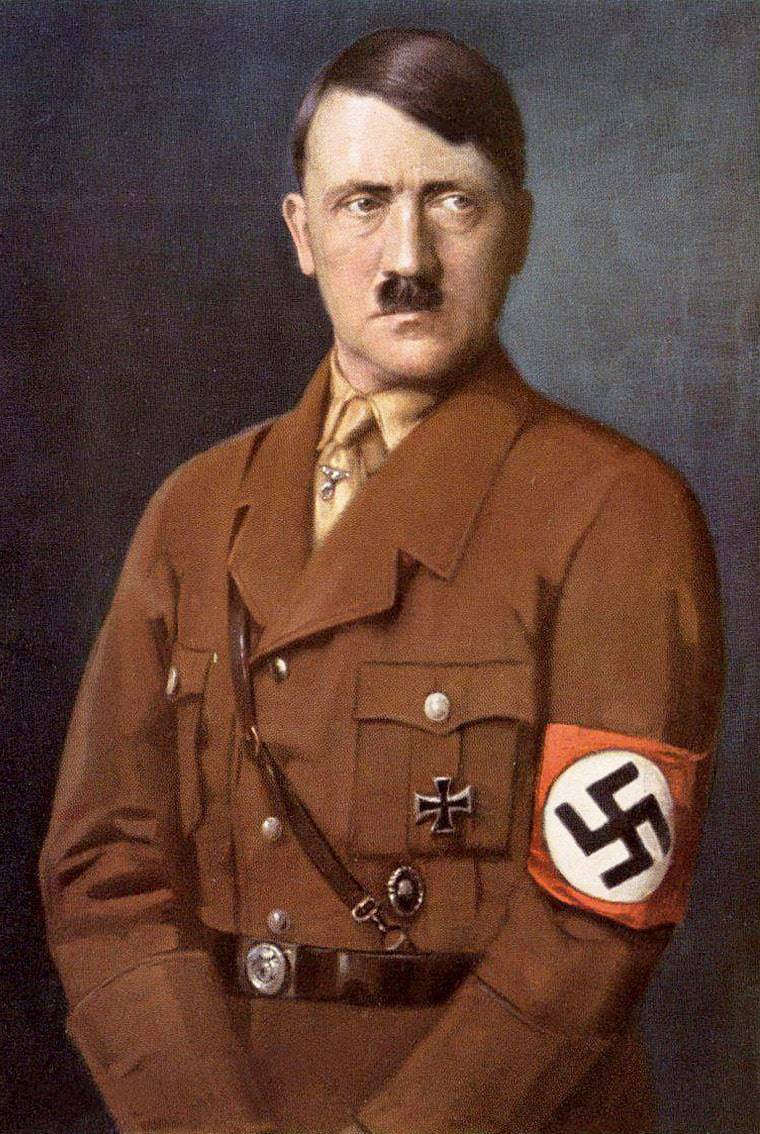 Due to Guchkov's participation in the preparation of a series of conspiracies against the Nazis, the German Fuhrer called him his personal enemy. Just like Nikolai Alexandrovich Romanov once did. Anyone could be proud of such enemies, not only the former chairman of the III State Duma of the Russian Empire, Alexander Ivanovich Guchkov.

The death of Guchkov, which happened on February 14, 1936 in Paris, is shrouded in secrets. There is also a version with accusations against the Stalinist agents, although the diagnosis - intestinal cancer, moreover, inoperable, made a year and a half before death, was known to the patient himself. 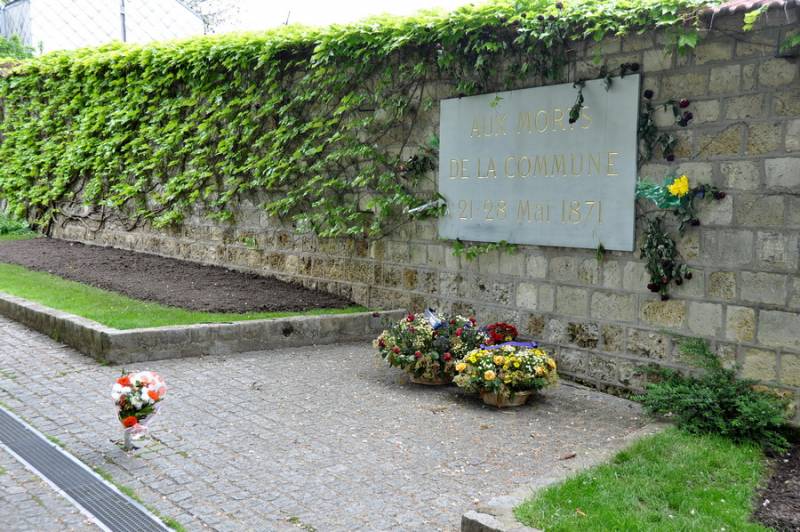 Guchkov was buried near the Wall of the Communards
His funeral at the Père Lachaise cemetery, well known as the burial vault of the executed Communards, brought together the full bloom of Russian emigration. Guchkov bequeathed to transport his ashes "for eternal comfort"To Moscow, but only"when the Bolsheviks fall».

However, there was simply nothing to transport, since during the years of the German occupation of Paris, the urn with the ashes of Hitler's personal enemy mysteriously disappeared right from the columbarium in the Pere Lachaise cemetery.