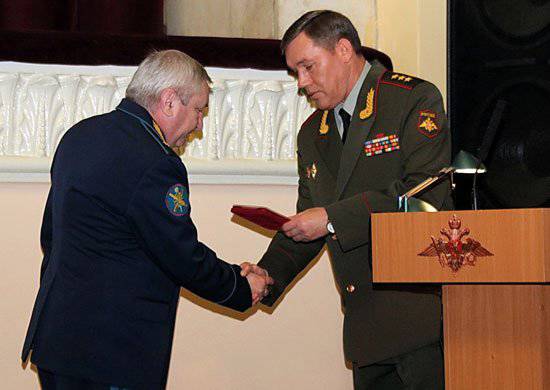 A meeting of the District Military Council was held today in Yekaterinburg under the chairmanship of the commander of the troops of the Central Military District (CEC), Colonel-General Valery Gerasimov.

For merits in mastering aviation technicians and many years of trouble-free flight operations in military aviation, the Commander of the Air Force and Air Defense Command of the District, Major General Viktor Sevostyanov, was awarded the honorary title "Honored Military Pilot of the Russian Federation."

For achievements in strengthening the country's defense and high personal indicators in the performance of his activities, the Chief of Staff - First Deputy Commander of the Air Force and Air Defense Command of the District Major General Alexander Tatarenko was awarded the Medal of the Order for Merit to the Fatherland, II degree.

During the meeting of the Military Council, questions were discussed on the progress of work on the disposal of ammunition with expired shelf life and summed up the certification of the district military personnel this year. Special attention was paid to the results of the spring call-up of citizens for military service.