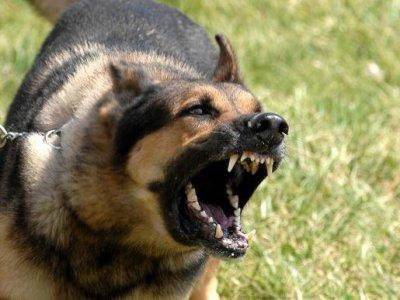 There was a dog. His name was Kadokhin. Do not ask me how this name appeared - I do not know.

Kadokhin was a real grandfather - an angry, experienced, strong and daring soldier. It is difficult to say what spoiled his character, or the hopeless inexperience of young dog service instructors, or age, or separation from the previous owner. Be that as it may, Kadokhin began to "build" the entire outpost.

It all started with the fact that once he bit a soldier in the car. In the evening there was a drawdown, and everyone rushed to the "shishiga." The latter in the body climb the leader and the dog. And so, someone managed to step on his paw. Kadokhin did not scream, but simply firmly squeezed his fangs on the bootleg of the unwary fighter's boot. Neither persuasion nor a blow to the face of the case did not help. Kadokhin chewed on his leg a little, then snarled, let go of the loot and turned away to the side of the shishiga.

For the next ten days, not a single watch returned to the outpost, in which Kadokhin would not bite any of the fighters in the attire. Nothing helped. Neither a piece of smoked sausage made from doppayka, nor intimate conversations with the dog. As soon as the fighter dismissed Kadokhin, his powerful fangs sank into his ankle. The leader apologized, defending Kadokhin in every possible way, spent political talks with the dog, increased the distance - nothing helped. Kadokhin always found the moment to cling to the ankle. At the same time, he never tore up prey, did not bark, thus manifesting his emotions. He simply squeezed his fangs for a few seconds and after that no longer showed his interest in the victim. Two times he did not bite the same fighter even once.

And then came the next day, the outfits as usual served. Almost without exception, the entire staff of the outpost somehow limped on one leg. Mature riot. The fighters threatened to refuse to enter the order as part of a dress in which Kadokhin would have been. Kadokhin only sat gloomily on the order next to his counselor, with all his appearance showing his innocence. Here is the order, the Watch goes to the border. As part of the dress, everyone is already limping, so they are not very cautious. Somewhere in an hour and a half, the counselor lowers Kadokhin from the leash for a little graze. Kadokhin, without turning around, silently speeds up his stride and hides ahead. The dress, razomlevshiy from the heat, walks in dimensional step along the system next. And in front of the system analysts repaired something in their boxes.

The sergeant, slamming the lid, decided to smoke before the road to the outpost. They settled right on the grass, dreamily gazing into the blue bottomless sky. And in this silence, broken only by the trills of the grasshoppers, suddenly there was a crackling crack of a dry shrub. The system analysts jumped up, listening to this sound. On the trail, from the low gray thickets, Kadokhin stepped out and confidently went towards a rapprochement. Silently. Fearfully. Purposefully ...

When Dozor came up with the systems analyst, one of them howled, examining the drops of blood on his ankle, and the second, leaning his back on the system column, concentrated on waving the butt of Kadokhin. Kadokhin silently waited, sitting opposite ...

In the evening, after dinner, a rally was held in the smoking room. Present commander. The question was resolved radically - Kadokhin was demanded to be removed from the outpost, removing his boots and showing his feet with bruises and bites. However, Kadokhin did not cripple - if there were wounds, then they were absolutely harmless. But the bruises were scary. The commander listened to all and went to his. Leader sad. Kadokhin was asleep.

It is difficult to say how everything would end with Kadokhin. Probably, it would be written off. From the detachment came his former leader, remaining on the extra urgent. They were silent about something for a long time, sitting near the outpost, then together they looked at a large anthill. In the evening, the super-detachment left, and Kadokhin left for Watch. He did not offend anyone anymore.

Six months later, Kadokhin was killed at the post. But this is another история. His grave is next to the gate, which is always looked after by fighters.