Armor of Sir Thomas Sackville from the Wallace collection 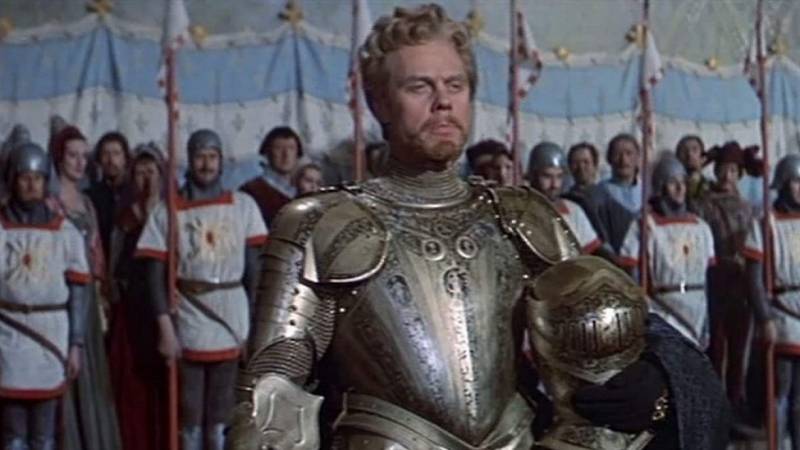 Gorgeous armor can sometimes be seen in the movies! Quentin Dorward, 1955 motion picture

"Fortress and beauty are her clothes ..."
(Proverbs 31: 25)
Museum collections of knightly armor and weapons. Today we continue the theme of the Wallace collection of armor, but we will tell you about just one single set of armor.

The main emphasis will be on something else: the story of the creation by King Henry VIII of England (reigned 1509-1547) of the royal armory in his palace in Greenwich, on the banks of the Thames and slightly downstream of the City of London.

Some of the best gunsmiths in Europe were brought here in 1514 to make armor for the king's own needs. And they made some great pieces of armor for him.

But after Henry's death in 1547, the short reign of his son, the boy King Edward VI (1547-1553), was followed by the reign of two queens, Mary I (reigned 1553) and Elizabeth I (1558-1603), neither of which ( as women) did not need personal armor. So the Greenwich workshop instead began producing armor for the nobility, who bought special licenses from the crown, giving them a special privilege to do so.

King Henry VIII was remarkable in every way. However, we are interested in him, first of all, as a military man responsible for the security of his state. But here ... it was not so simple at all.

For example, realizing that the cavalry of the French gendarmes is a great force, he was able to lead a detachment of nobles on "armor" horses in his guard. But he only had enough money for 50 people!

True, each such rider was entitled to "support" from one rider in light armor, one horse archer and one servant. In 1513, these horsemen fought in the Battle of Gunegaite. But in 1539 the detachment was disbanded due to the excessive cost! 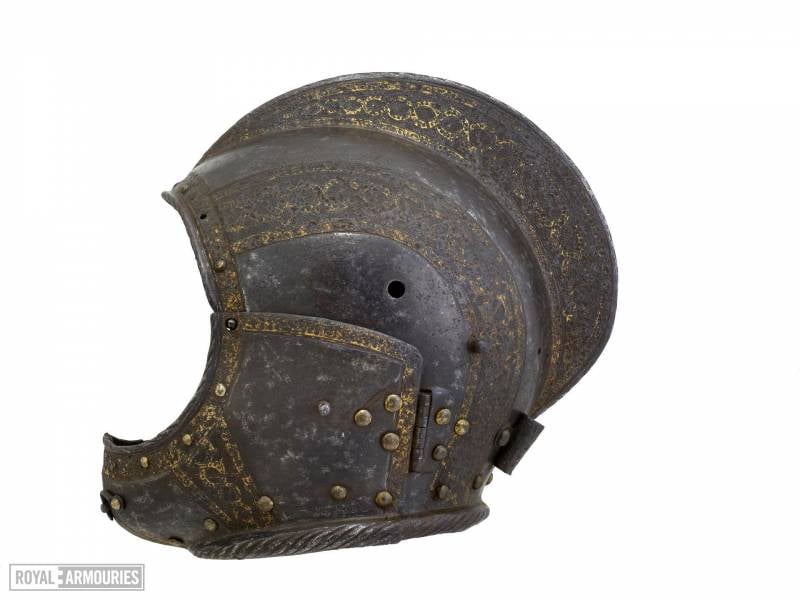 Arme's helmet (1580), probably owned by Peregrine Berthier, Lord of Willoughby D'Fresby. The work of the Greenwich Armory. Royal Arsenal in Leeds, England
Wanting to limit the extravagance of his subjects, who spent huge sums of money on fashionable clothes, he ordered everyone whose wife wears a silk underskirt and a velvet upper skirt to keep ... a war horse, beyond the size of his income.

And special "marshals" went to balls and watched who's wife was dressed. And then they went to his house to see whether he was keeping a war horse or not. Another law was passed: you have an annual income of 100 pounds - you also keep a war horse!

But Henry did not have a production base for the production of a large amount of armor. Therefore, the armor had to be imported from the mainland.

But there were also problems with ordering armor from famous masters. 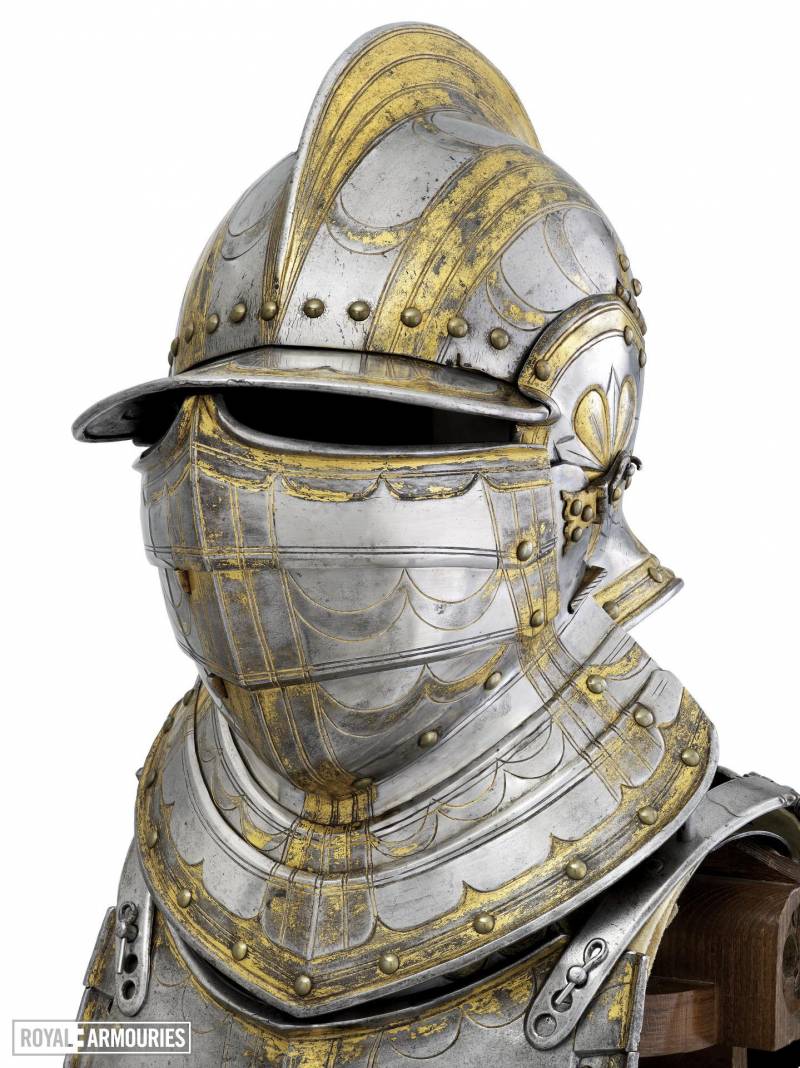 Typical work of the Greenwich Armory: 1575 armé helmet from the armor of William Somerset, XNUMXrd Earl of Worcester. Tower of London
The fact is that the funny incident with Porthos, who did not want to be measured for his costume, described by A. Dumas in the novel "The Viscount de Bragelon", is not a fiction.

It was considered offensive to measure a monarch or a noble person. Therefore, for these purposes, doubles were used, selecting the appropriate men in terms of build, height and posture. Which was by no means easy.

Then from this "body" they made a "pandora" - a mannequin made of wood. And so it was sent to the master abroad.

After that, the made armor was taken to the customer and tried on on a double. Later they were again taken for finishing. And they returned again, decorating. It all stretched out for a long time. Moreover, it also happened that the waist of the double did not keep up with the waist of its owner.

In a word, it was best to have masters at your side, in order to go to them for fitting on your own - that was not considered shameful for the monarchs to put on armor to try them on!

And if armor for the infantry could be bought abroad, even wars did not interfere with this, then for one person, dependence on "imports" seemed an insult.

Hence the open workshop in Greenwich. And the local craftsmen eventually developed their own, very luxurious "Greenwich style". A lot of armor was made in this style, which ended up in various museums. So if in the future we have to talk about them, then without, in fact, stories... It will simply say "Greenwich style." Made then ... And everything is clear. 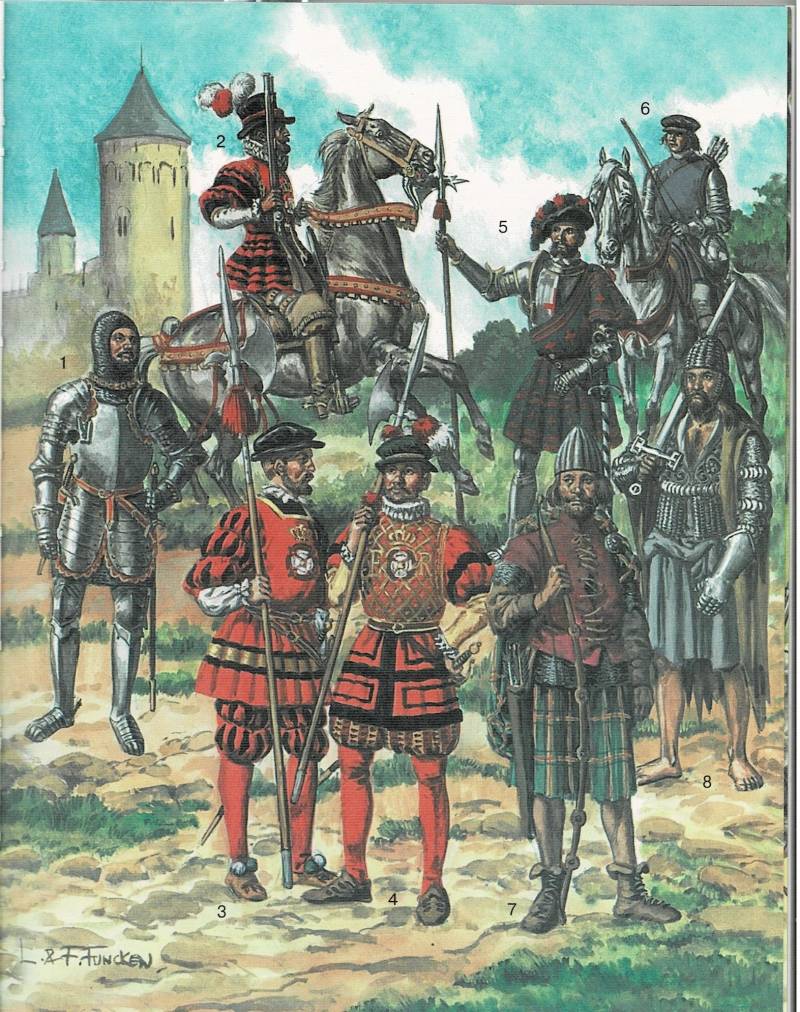 Soldiers and Officers of the English National Army of the Queen Elizabeth Era: I. Provincial Nobleman, 1548. His armor combines modern and archaic protective devices such as a haubert (hauberk) or haubergeon (baubergeon). 2. Yeoman of the guards equestrian escort in 1575 under Elizabeth I. 3-4. Yeoman of the Royal Guard, 1520 and 1575 The initials ER did not appear until 1570, although Elizabeth ascended the throne in 1558. 5. Officer of the Royal Guard, 1520 6. Scottish Light Cavalry, 1580 7. Scotsman, circa 1580 8. Chief of the Squadron Irish in the time of Elizabeth. Illustration from the book by Liliana and Fred Funkenov “Encyclopedia of weapons and military clothing. Middle Ages. Renaissance: Infantry. Cavalry. Artillery. M .: Astrel, 2002, p. 29
Now back to the story of the armor of Thomas Sackville / Sackville (Thomas Sackville)
- a diplomat and writer, Lord Buckhurst, and later the Earl of Dorset (1536-1608). He ordered his armor while looking at the Almain Album, which featured a series of watercolor illustrations depicting many of the best creations of the Greenwich workshop under the direction of Elizabethan master Jacob Halder (kept in the Victoria and Albert Museum, inv. D.586-614-1894). 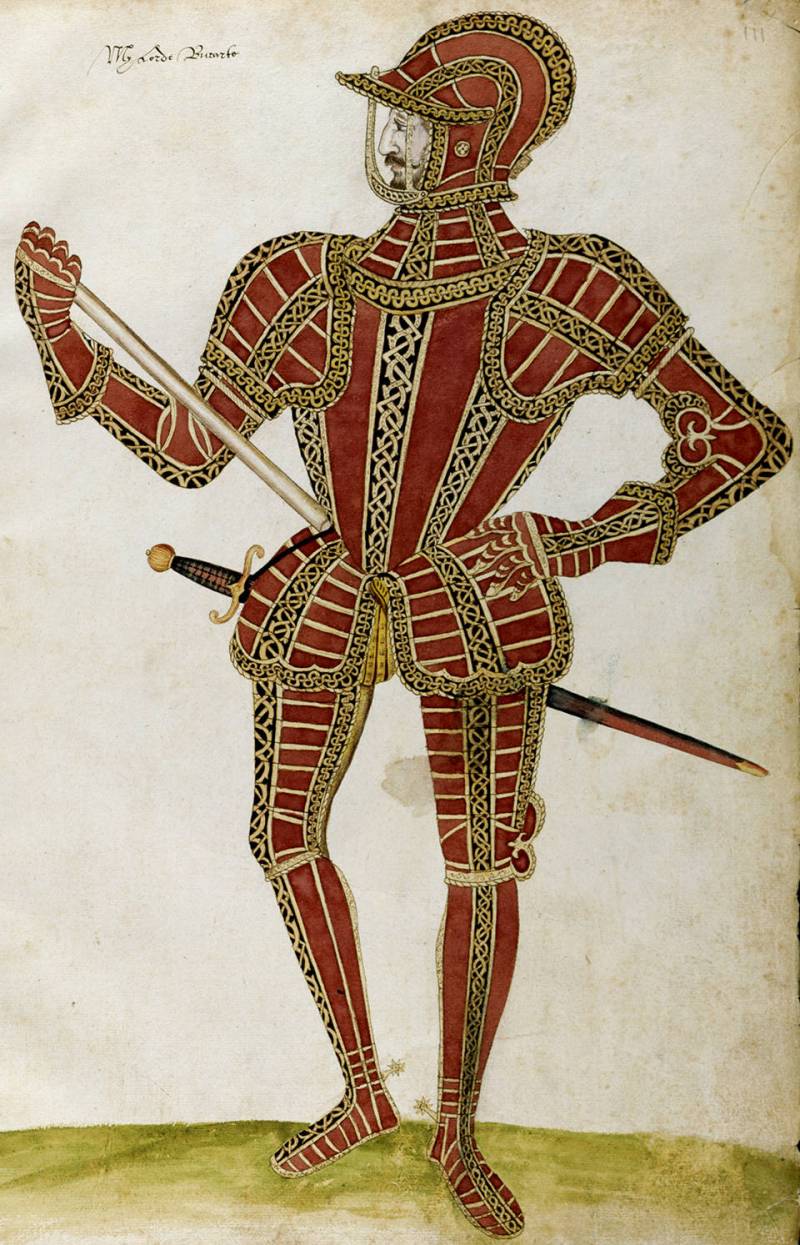 "Lord Buckhurst", drawing of armor for Thomas Sackwill, (detail), 1587. "Album of Almain", master Jacob Halder. It was on this drawing that they were made for him. © Victoria and Albert Museum
Sir Thomas served as a cavalry commander during the invasion of the Spanish armada in 1588. And it is possible that he ordered this armor to adequately perform in this role. However, the fact that Sir Thomas was licensed to order armor in Greenwich does not necessarily mean that the armor was intended specifically for his personal use. It is possible that he ordered them as a gift to his son Sir William, who went to fight on the continent (and was killed) in the 1590s. 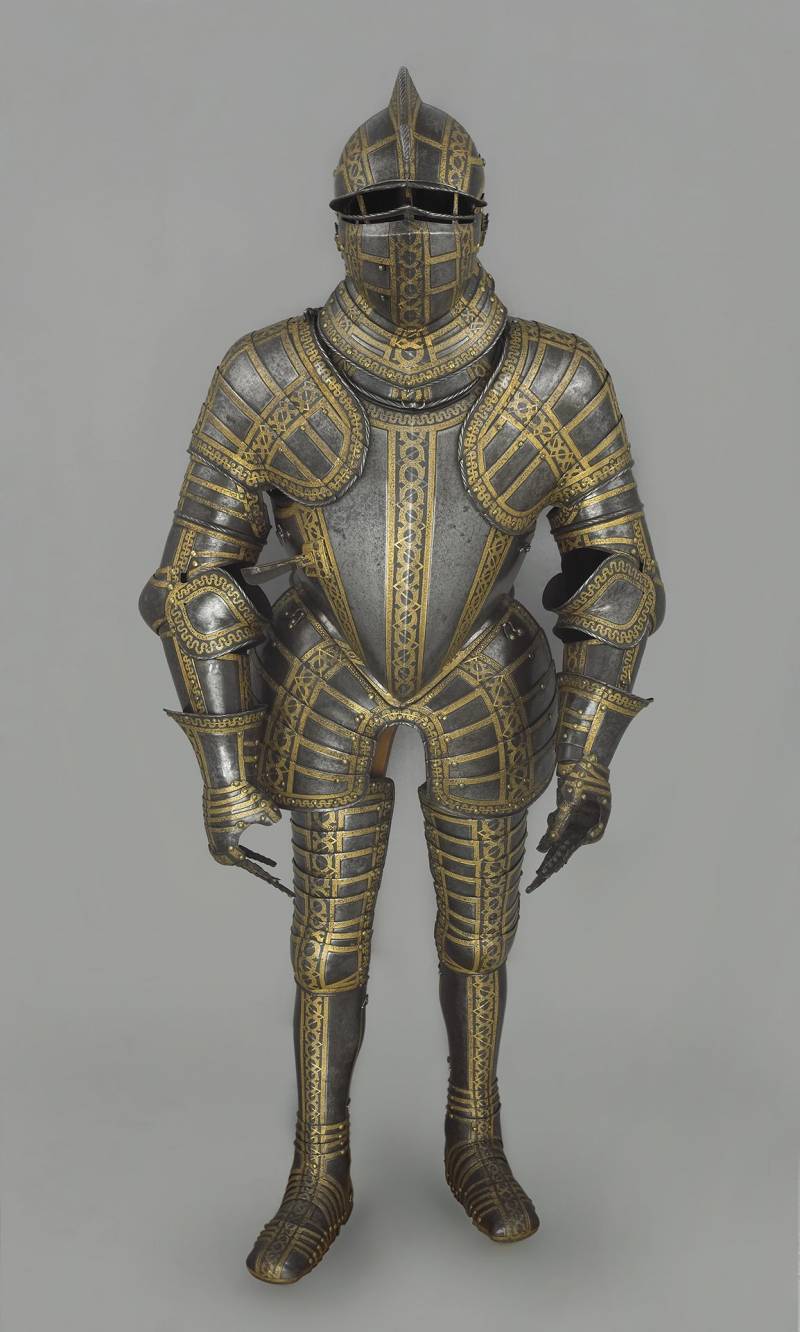 The armor for Thomas Sackwill was made by Jacob Halder (d. 1608) sometime around 1587-1589. Materials: steel, leather, gold and copper alloy. Total weight 32,03 kg. Weight with an additional bib (poster) - 36,7 kg. © Wallace Congregation Board of Trustees, London
The "field" headset included interchangeable parts that were used to "customize" armor for several different forms of "field" combat, rather than for knightly tournaments.

So, in the infantry they wore only a helmet (without a face shield), a cuirass (a breastplate and a back plate) and mittens.

For light to medium cavalry combat, when the wearer fought on horseback with firearms, a sword and a light spear, shoulder pads and a "skirt", as well as legguards, could be added. And in some cases, bracers.

For cavalry attacks with a spear, armor was worn at the fullest extent, with the addition of a breastplate that strengthens the protection, a spear rest (a bracket on the right side of the chest that supported the spear) and a buff (or buff) to protect the lower part of the face. As well as leggings and plate shoes.

Buckhurst's armor is also the only Greenwich set that retains the original set of stirrups (and they were also made different!). In fact, the only piece of this armor that was lost was the horse armor, or at least the "armored" saddle. 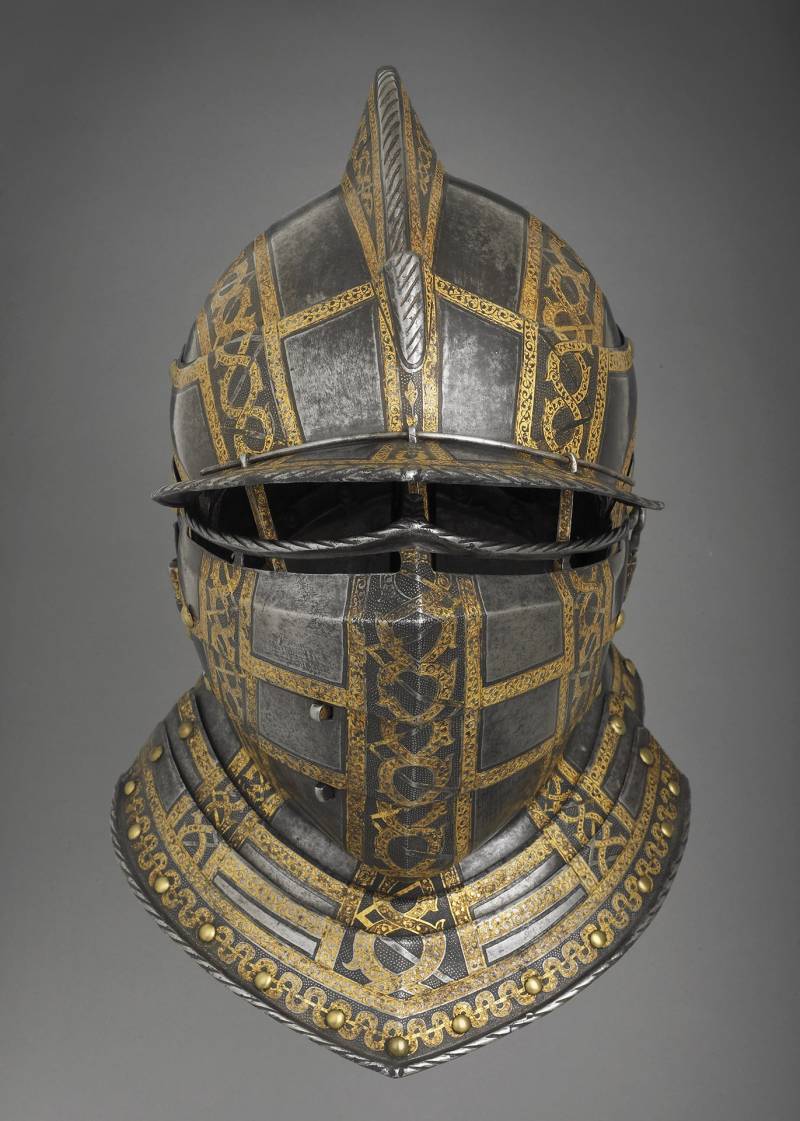 Instead of a full visor, now on helmets, a pre-face buff was increasingly used, which was attached not to the helmet, but to the cuirass. Armor of Thomas Sackville. © Wallace Congregation Board of Trustees, London 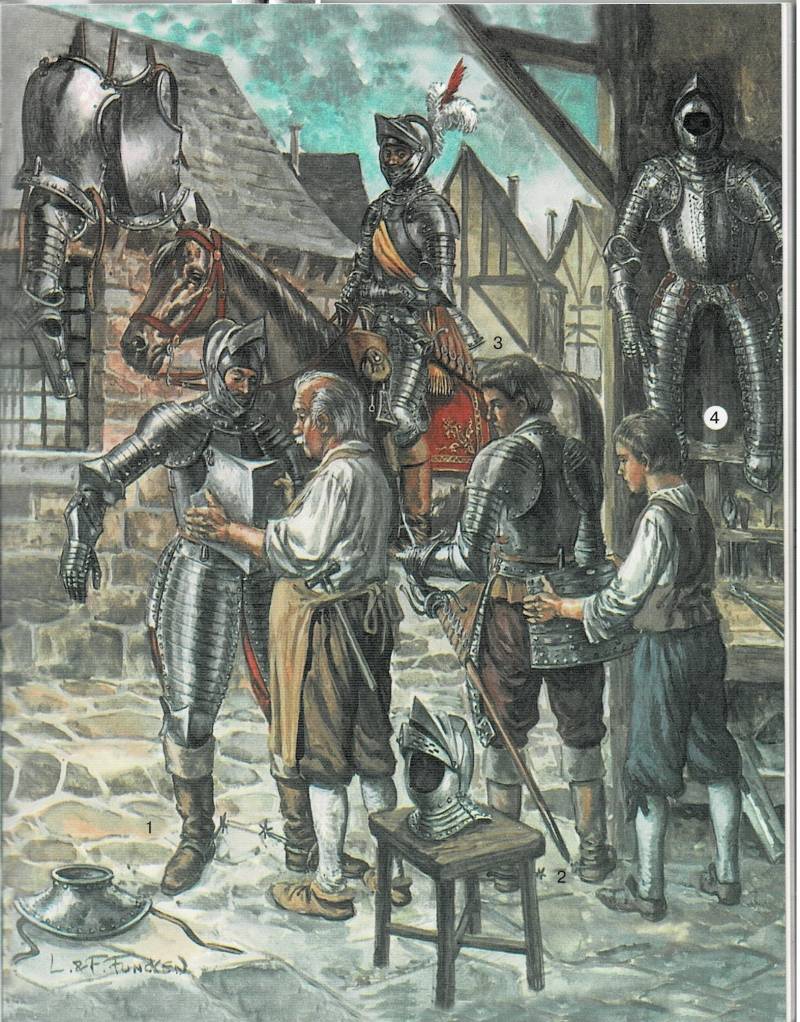 This illustration clearly shows the change in fashion for trousers: by 1595 they became long, although they did not lose their "bulk". And they also had to be covered with "lush" legguards to the knees. Noteworthy is the additional armor plate on the chest, which now had a sharp edge in the middle. Its thickness was such that it was difficult to pierce it with a pistol, even firing point-blank! Illustration from the book by Liliana and Fred Funkenov “Encyclopedia of weapons and military clothing. Middle Ages. Renaissance: Infantry. Cavalry. Artillery. M .: Astrel, 2002, p. 39
Like most late XNUMXth century Greenwich armor, this vibrant set is richly decorated with engraved and gilded "straps" and borders.

The main stripes contain a dynamic pattern in the form of a zigzag combined with guilloche (guilloche is an ornamental pattern that looks like intertwining wavy lines or a grid) on a darkened background. 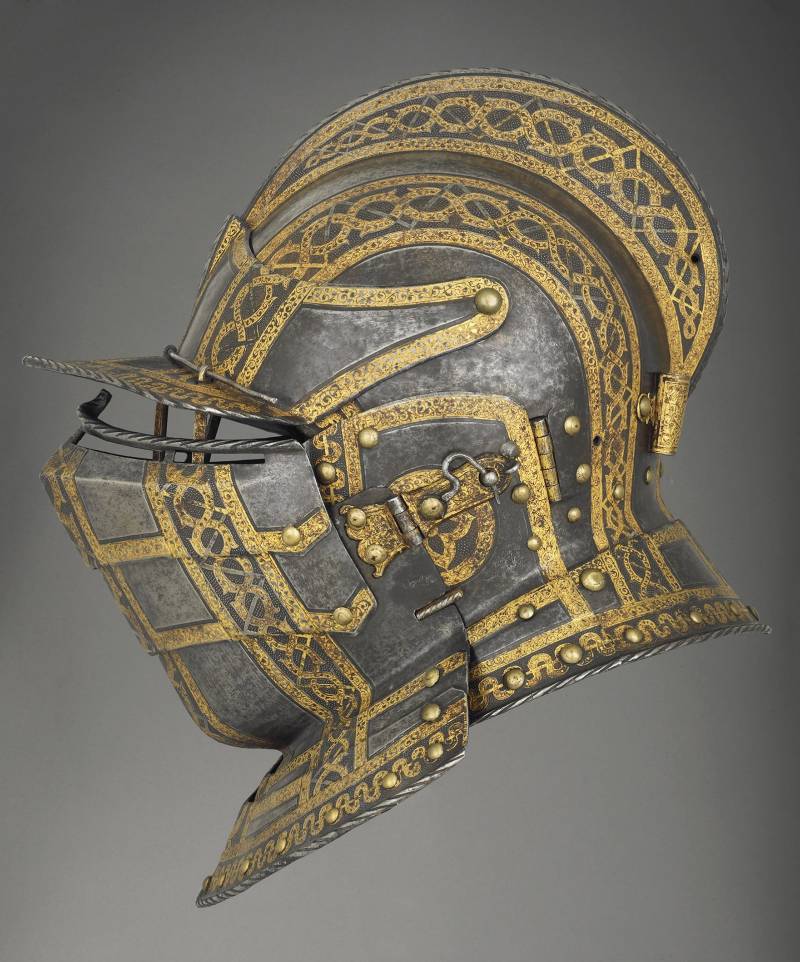 Thomas Sackville's burgundy helmet. Side view. © Wallace Congregation Board of Trustees, London
The fashion for clothing of the time was also reflected in the design of these armors, which had an elongated shape and a "pigeon chest" or "pod" - the standard form of men's doublets of the late 1500s. It also has wide, rounded hip plates that mimic the shape of Elizabethan men's pants.

Armor of Thomas Sackville. Side view. Impressive, don't they? © Wallace Congregation Board of Trustees, London
A number of other armors have survived that are closely related to the armor of Buckhurst.

At least four other Greenwich suits of the same decorative scheme were made, of which three have survived. This is the armor of James Scudamore, which is now in the Metropolitan Museum of Art.

Moreover, there is a portrait of Scadamor in a private English collection, in which he is depicted in this armor. And they are shown in the form in which they should have been worn. Complete with richly embroidered skirt or base, intricate sword, sword belt and military belt. And also with ostrich feathers on the helmet.

There are other armors as well. But we will tell about them next time.